Is it possible that squeezing even more seats into an aircraft can improve the passenger experience for economy class travelers? Emirates is set to find out as the carrier continues to add two-class configuration A380s to its fleet with more than 600 seats on board.

That’s a whole lot of people to be stuck behind at immigration if you’re last off the plane, but there are also some advantages to riding on the highest capacity aircraft currently in the sky, especially if you can get the correct seat.

The main deck of the two-class A380 looks very similar to the three-class version Emirates operates. Row after row of 3-4-3 seating offers space for nearly 440 passengers to cross the globe. Look more closely and there are some notable upgrades, especially around the inflight entertainment and connectivity aspects of the offering.

The new configuration has the 13.3″ ‘Elite’ screen from Panasonic Avionics and the eX3 entertainment system with Emirates’ custom ICE interface on top, making the IFE one of the nicest flying in coach today.

@WandrMe It’s our Elite 13 monitor – actual size 13.3 inch. It doesn’t get any larger in economy these days!

On the connectivity front, the new aircraft features Panasonic’s Ku-band eXConnect solution, providing more bandwidth than the L-band kit found on many of the carrier’s older aircraft. These improvements also extend upstairs where an additional 120 coach seats now reside at the front of the cabin. And it is those upstairs seats that truly show off the best that Emirates’ A380 has to offer for coach comfort.

The upper deck is quieter and the economy seats are in front of the engines, further reducing the noise. It is a smaller cabin, with fewer passengers overall and also fewer seats per row. The window seats are especially comfortable, with extra space and only one person between you and the aisle rather than two as configured downstairs.

Indeed, the 2-4-2 layout is arguably the best widebody economy class option flying; getting an upstairs seat on an A380 in economy is a huge #PaxEx win. And, perhaps my favorite feature of the two-cabin Emirate A380, something the other airlines do not have: the jumbo sized lavatory for economy class passengers on the upper deck. It is huge. 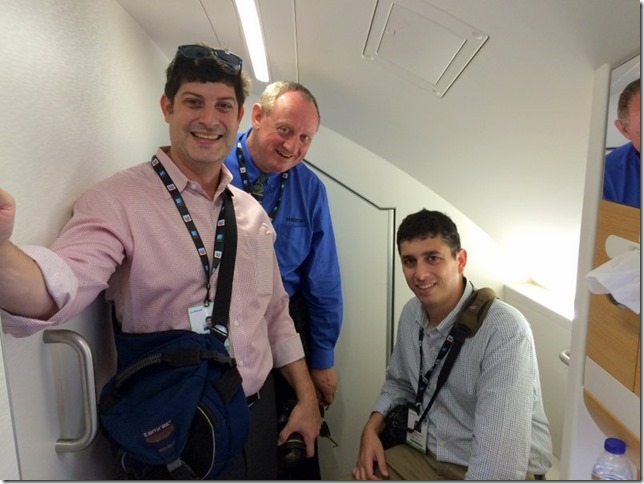 The upper deck lavatory on the Emirates A380 is extra spacious. Image: Seth Miller

A few aircraft bathrooms earned the nickname “party lav” for the space they offered to passengers. Finding one of them in an economy class cabin is spectacularly rare. Continental Airlines had a particularly generous version on its Boeing 767-200s, for example, but those are long retired now.

Emirates replaced the lav used for the shower on its three-class A380 with a “normal” version for the two-class layout and it is anything but normal, as evidenced by the above photo snapped at the Dubai Air Show late last year.

Considering the efforts to slim lavatories in other coach environments this layout is a spectacular counter point. Of course, it only exists that way because it would otherwise be dead space in the upper deck of the A380; it is not like Emirates or Airbus went out of their way to purposefully design that area to house a more comfortable economy class toilet. But I’m willing to forgive the lack of intent for the sake of the product delivered.

Is it worth switching plans just to fly on this configuration for the sake of the larger lav? Almost certainly not. But on the off chance you’re flying one of the routes it plies, consider going for a seat on the upper deck . You might find the trip just a bit more comfortable.