Inflight power. Everyone wants it, but it’s only really hit the “expected on your flight” primetime in the last couple of years. Yet ampere USB sockets are still de rigeur, even six years after the debut of the 2A-requiring iPad. And the passenger experience side of airlines seems unable to highlight if and where a carrier has the new plugs. Even Routehappy doesn’t show 1A vs 2A vs high-power USB yet.

With a huge amount of the industry dominated by Astronics’ resold products — to the extent that, a couple of years ago, Astronics told this writer that they didn’t entirely know on what aircraft their product could be found — it struck Runway Girl Network that, at a time when a number of the Astronics patents are due to expire, a discussion among relative inflight power upstarts would be of interest.

“There is a lot of excitement around our system,” BAE Systems’ PR Shelby Cohen tells RGN, in the context of the smart power aspects of its IntelliCabin range, “only because of our benefit that it seems to provide to our airlines. As the migrations happen more and more on the IFE side, the demand for power seems to come up more. And so there is a real benefit that people are seeing. We are seeing more of a demand and pull in that direction than we had at the last show — which is encouraging.”

BAE Systems – of EW streaming movie content claim fame – believes its power distribution “is more democratic in process” than current systems. “It’s not first in line. Everybody gets power. It’s who needs most and it is a smart outlet. Last year at this show, the whole buzz was that everything was going to USB. We stuck to: ‘no, we are going to keep a combo.’ There is going to be 110 and USB.”

And it’s now clear to BAE that customers want the combo. “Because passengers want a real plug that charges faster.” 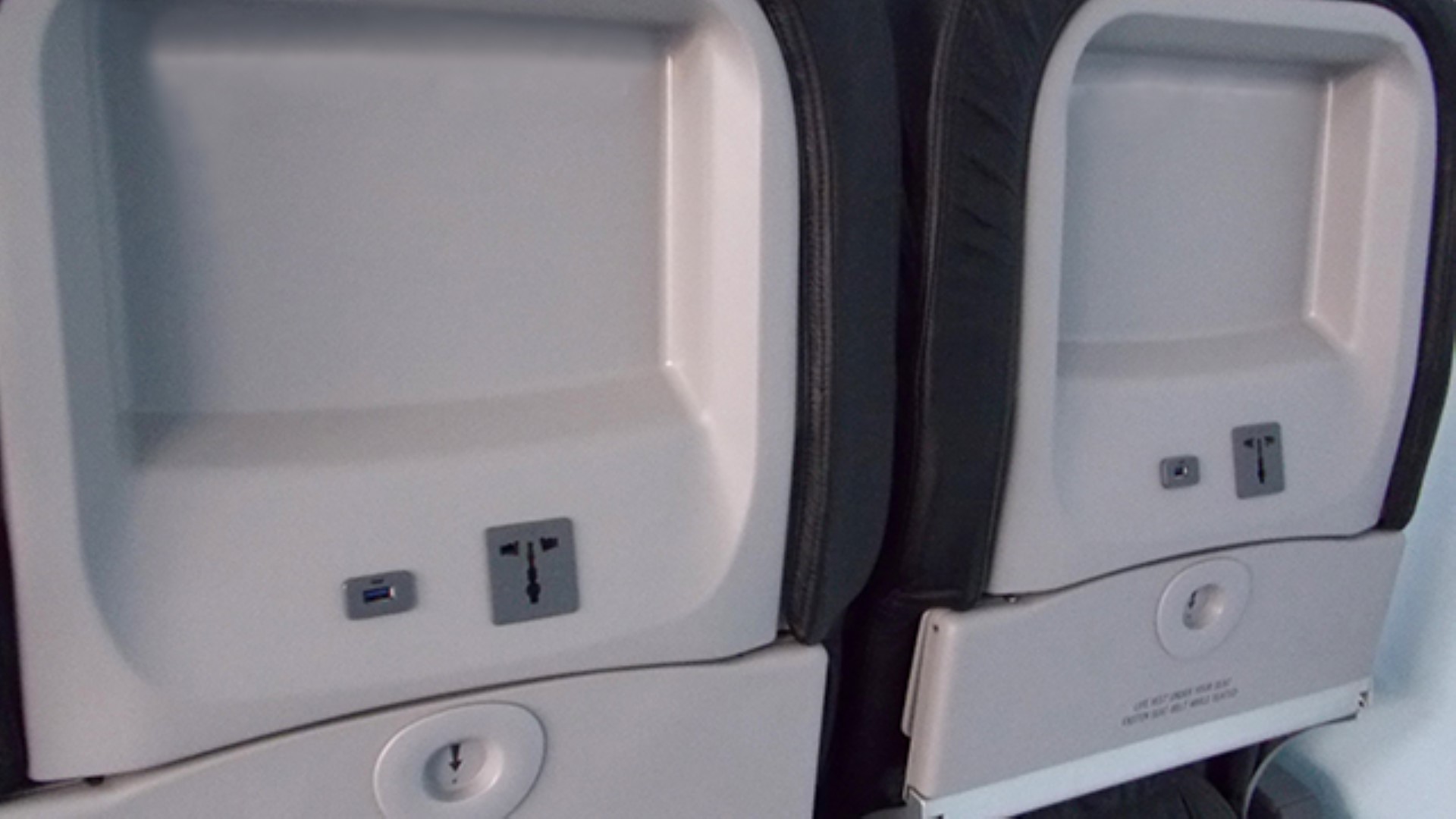 Cohen’s assertions do ring true in some ways. Most travellers will be better served by plugging their AC brick into the main socket rather than trusting the unlabelled, varying USB socket’s power options. (That Apple still ships a 1 ampere AC adaptor with its latest, 2A-capable iPhones, and that some airlines do offer 2A charging, does not invalidate that general advice.)

Yet Miami-based Imagik’s general manager Claudio Ovide comes at this from a different perspective — one where an upstart power supplier is choosing to go for a full-on, full-power “dumb” system after customers rejected the idea of smart power.

“It was more a response to the market saying to us, ‘great, you have a great product, but what we want is driven by the iPad. The iPad requires, at least on the first start, 1.9-2.1A. So, everyone is saying, because of that, that [level of supply] is the standard. You cannot go under that, because people with iPads will not be able to charge.”

Interestingly, RGN managed to draw Ovide out about his view of the future of inflight power.

“We will be probably moving to PD — USB PD — and that is going to be the end of discussion, you are going to be able to plug anything into the USB. That will be the end of the 115 [volt socket]. Forget about AC, you just plug everything [into USB]. But right now, reality is 2.1 [amp USB] because of what is currently on the market.”

RGN asked Ovide how long it will be before the industry starts getting rid of AC ports. His response: “With USB PD, probably a year. That is going to happen. It is going to be driven also by how how fast the consumer market responds with a lot of product that is USB PD. I am assuming that they will have their regular connection to the 115 [volt AC] and they will also have a new USB PD.”

“It becomes a trend and people will say ‘no 115 [volt AC], I will use a USB port’,” Ovide said. “At that point, in the aircraft, I would say it is absolutely perfect. You are eliminating so much power, hassle, harnesses, complications. You’re turning it into a much more manageable, less power, less heat, much more reliable state of the art product.”

Underlining his point, Ovide said, “If we talk again in three years probably it will have happened. USB is going to be strong, very strong.”

Unsurprisingly, Astronics – which is estimated to hold as much as a 90% market share in in-seat power (with KID Systeme understood to hold the lion’s share of the remainder) – has a somewhat different view of how things will shift out, with management noting to RGN that none of the up-start systems are linefit offerable.

We welcome competition; we will see where it goes. We have a very, very good customer base. Very loyal customer base, but they have price points and I think some of those entrants are skewing the price points, and I think longterm, if they choose to go with a start-up, I will call it, they usually come back.

When more seats mean a more comfortable ride in economy