Zodiac Aerospace is exploring the opportunity of seating passengers underneath the main deck of commercial aircraft, in the area currently occupied by baggage and the occasional crew rest, catering trolley stowage, or downstairs lavatory area.

The interiors powerhouse has applied for a patent around a wide range of methods to enable lower deck seating on passenger aircraft, unearthed by Philip Robinson at the very useful AeroPatent.

“Conventional passenger transport aircraft typically have a main deck cabin on the upper deck and a cargo area on the lower deck,” Zodiac notes in its application. “Research has indicated that an average of only about 37% of the cargo area is used nowadays. This may be because passengers are limiting their luggage due to increased costs and/or only bringing carry-ons. This is particularly the case in Europe when many aircraft are reconfigured for summer travel/shorter flights.”

Zodiac is applying for patents for a remarkable number of areas in the concept across its 34-page patent application, which may or may not all combine (and which certainly are not all individually novel):

There would seem, however, to be a significant amount of prior art around this patent, and certainly around crew rests, luggage storage and stairways.

A lower deck lounge harkens back to the 1970s glory days of flying, when Californian carrier Pacific Southwest Airlines’ short-lived Lockheed L-1011 aircraft were delivered with a lower deck lounge that included integral airstairs for boarding directly from the tarmac. The PSA widebody experiment was not a success, and lower deck installations since have largely remained a matter of crew rest or economy class

The trick for Zodiac will be to ensure that any lower deck customisations do not affect the structure of the aircraft.

Speaking with Runway Girl Network last year, former Airbus head of aircraft interiors marketing Zuzana Hrnkova noted that the Lufthansa underfloor economy class lavatory module on the airline’s Airbus A340-600 aircraft “wasn’t a big success, mainly because for those options there is a structural impact. What airlines want is a soft customization, not a hard customization, which maintains the residual value of the aircraft and flexibility when it comes to their sale.” Airbus’ crown crew rest option for the A350 is, as a result, a soft customization rather than built into the structure.

Despite the attractiveness of utilizing the full vertical space within an airframe for passenger seating, there are significant safety issues to overcome — in addition to the question of whether passengers will want to travel in a windowless box. Accessibility issues are also important: it would not be appropriate to prevent passengers who cannot use stairs from taking advantage of a lower deck product. 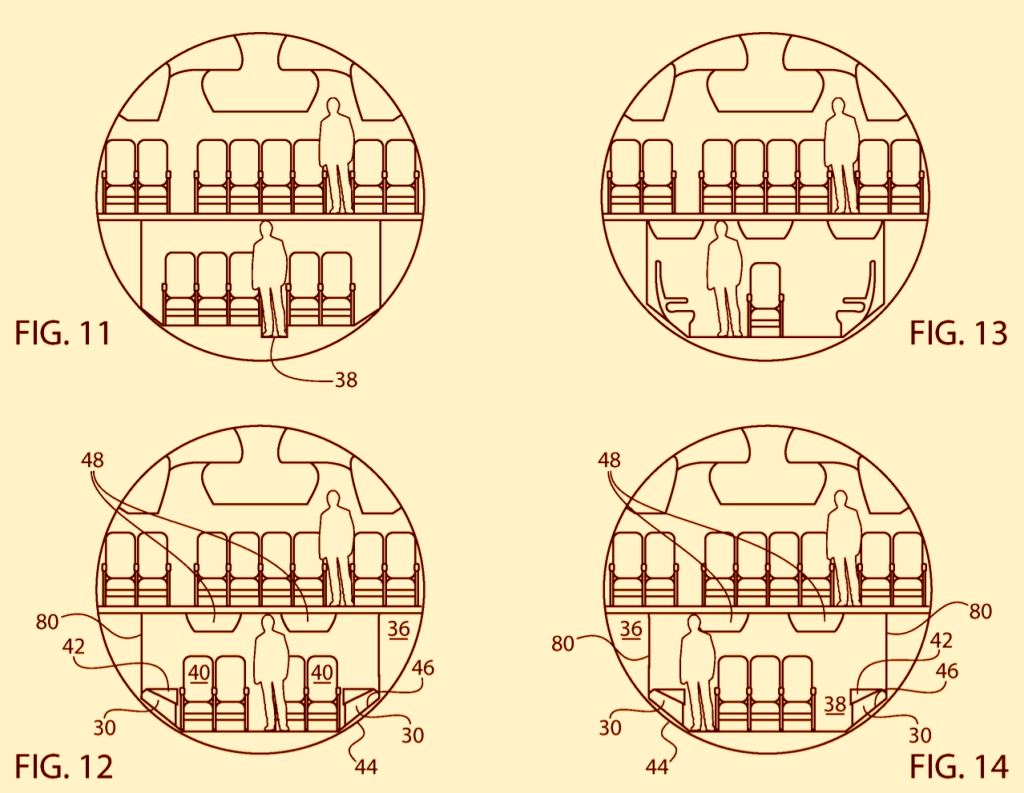 Zodiac is suggesting a variety of configuration options

A much-mooted option previously has suggested propliner-style separate bunks for first or business class passengers in the crown or lower deck of the aircraft, which would be used only during the cruise phase and thus nominally require different standards of certification and egress. For takeoff and landing, recliner seats would be provided on the main deck, which would not need to be as spacious as current first or business class seats.

Regardless, Zodiac is to be praised for its innovation and openness. Releasing patent applications into the wild with accessible illustrations is a useful way to stimulate discussion about the passenger experience. 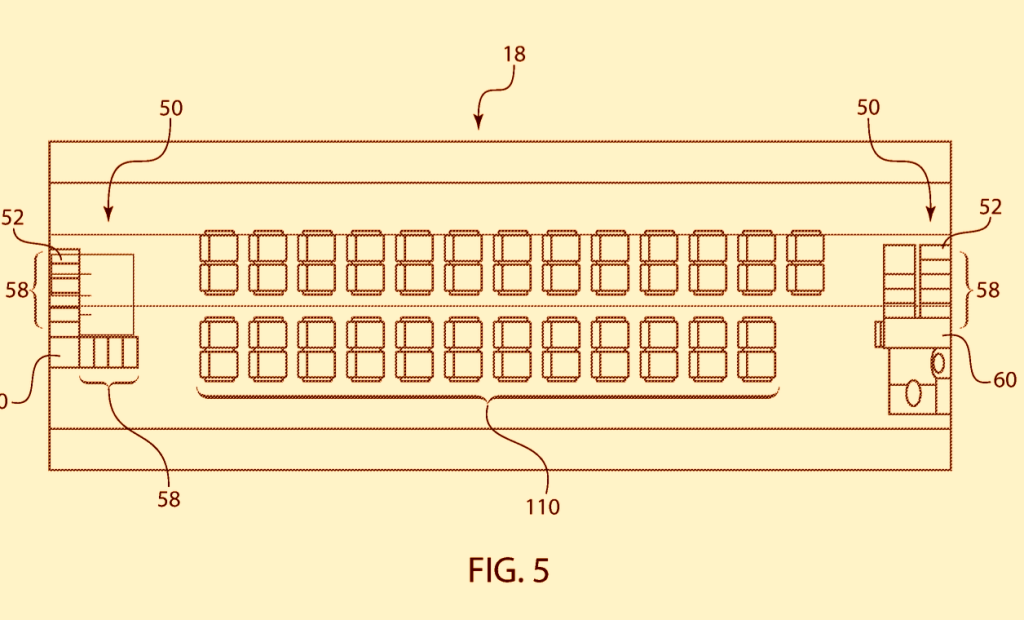 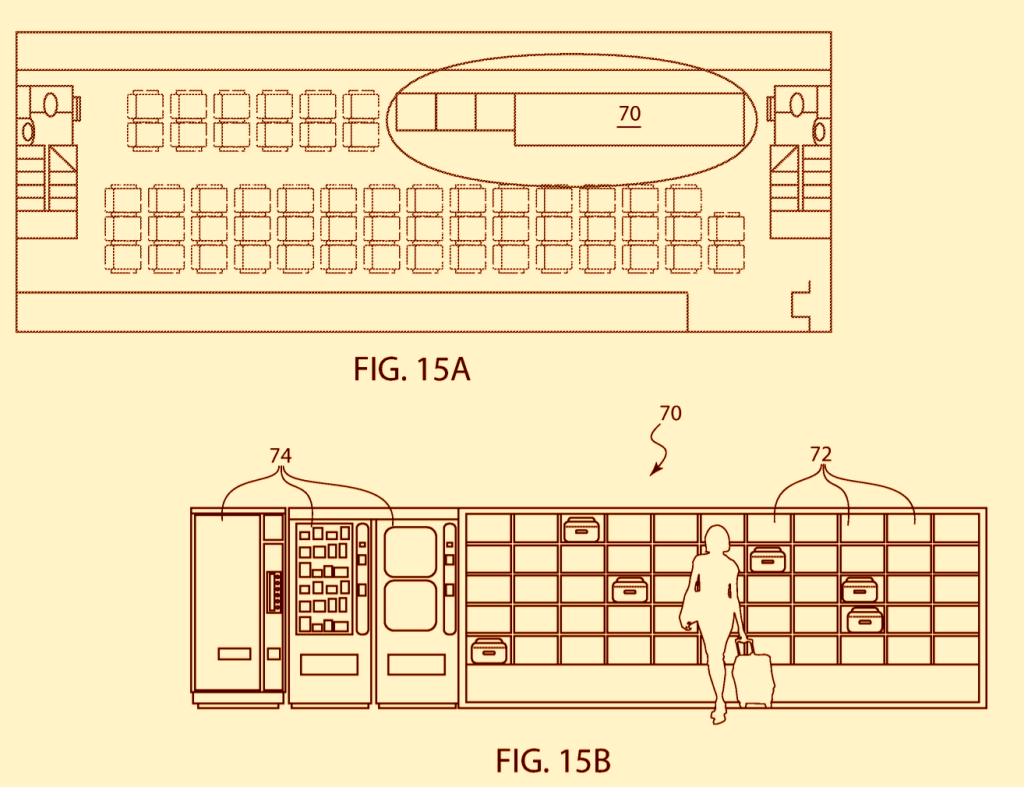