Five years after receiving its first Airbus A380 aircraft, Lufthansa has completed refitting its entire fleet with fully flat business class seats, premium economy and inflight connectivity. During a summertime tour of D-AIMN in Lufthansa Technik’s Frankfurt hangar, RGN took a fine-toothed comb to the passenger experience improvements (and what could be considered a few missed opportunities) in the airline’s refurbished version of the world’s largest passenger aircraft.

With first class remaining at the front of the upper deck, the biggest change on board the A380 is in business class, where Lufthansa’s significantly outdated angled lie-flat seats — some of the least comforable examples of their kind — have been replaced with fully flat beds.

Notably, the A380’s configuration is akin to the arrangement on the airline’s Airbus widebodies and refurbished Boeing 747-400 jets, rather than its Boeing 747-8I, on which the seat was premiered (and rapidly nicknamed “footsie class”).

Lufthansa refers to its two versions of the seat’s pairs as H (parallel with each other but at a slight angle away from the aircraft centreline) or V (angled towards each other).

The A380’s upstairs business class cabin is very similar indeed to the A330 and A340 cross-sections, which were installed with an H V H arrangement, rather than the V V V of the 747-8I. The refitted 747-400 also contains an H V H layout.

Apart from the relief at no longer playing footsie with the middle manager from Stuttgart sitting in the next seat, the big benefit of the H seat pairs is that the window passenger is able to step out over the aisle passenger when the beds are both flat. The pointed footrests of the V version end up with just a few centimetres between them — not enough to get a foot on the floor.

Compare the lack of anywhere to stand on the V seat configuration: 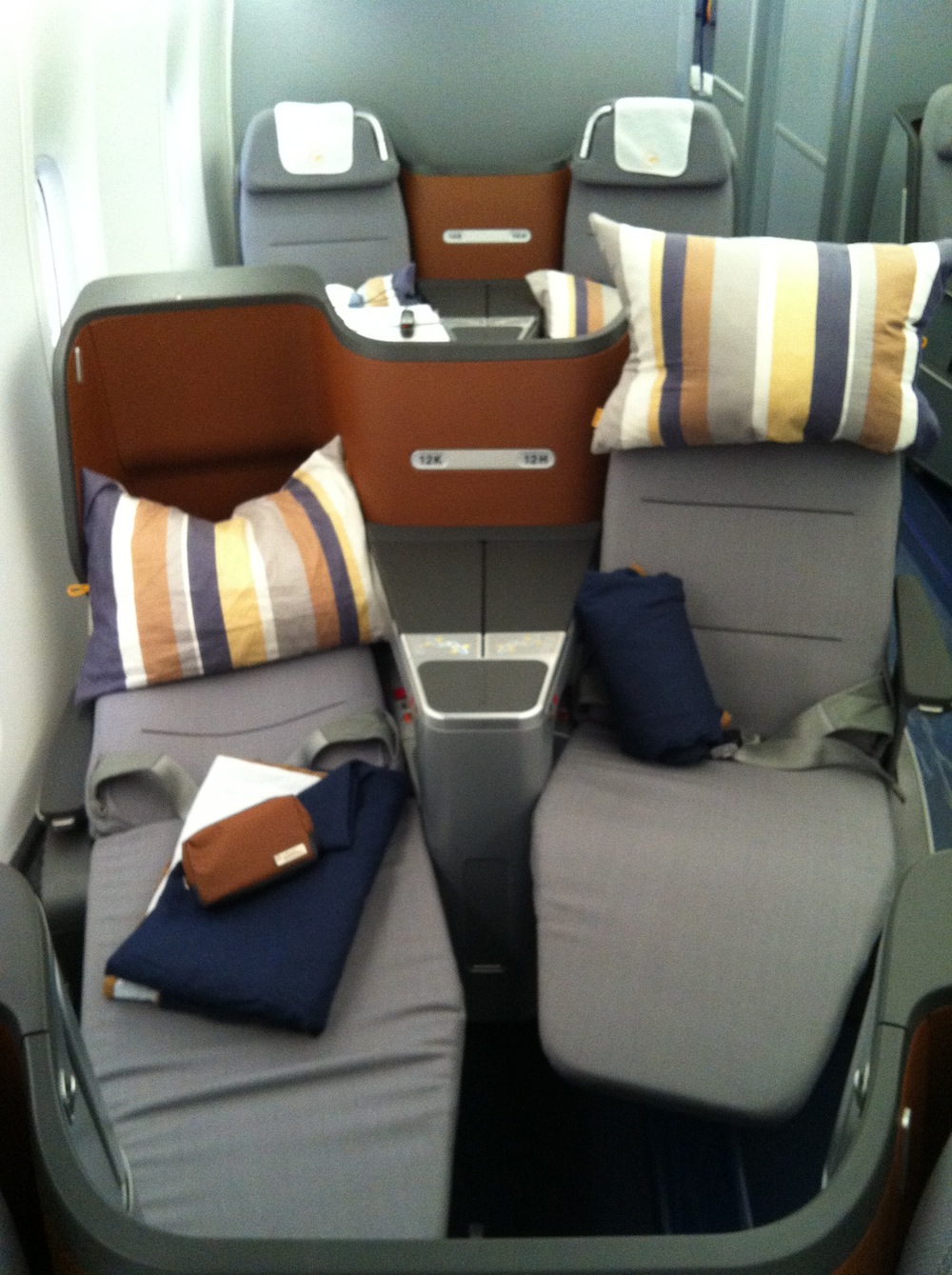 The V seats, when reclined, are tricky to escape for the window passenger

With the (small but workable) space on the H seat configuration: 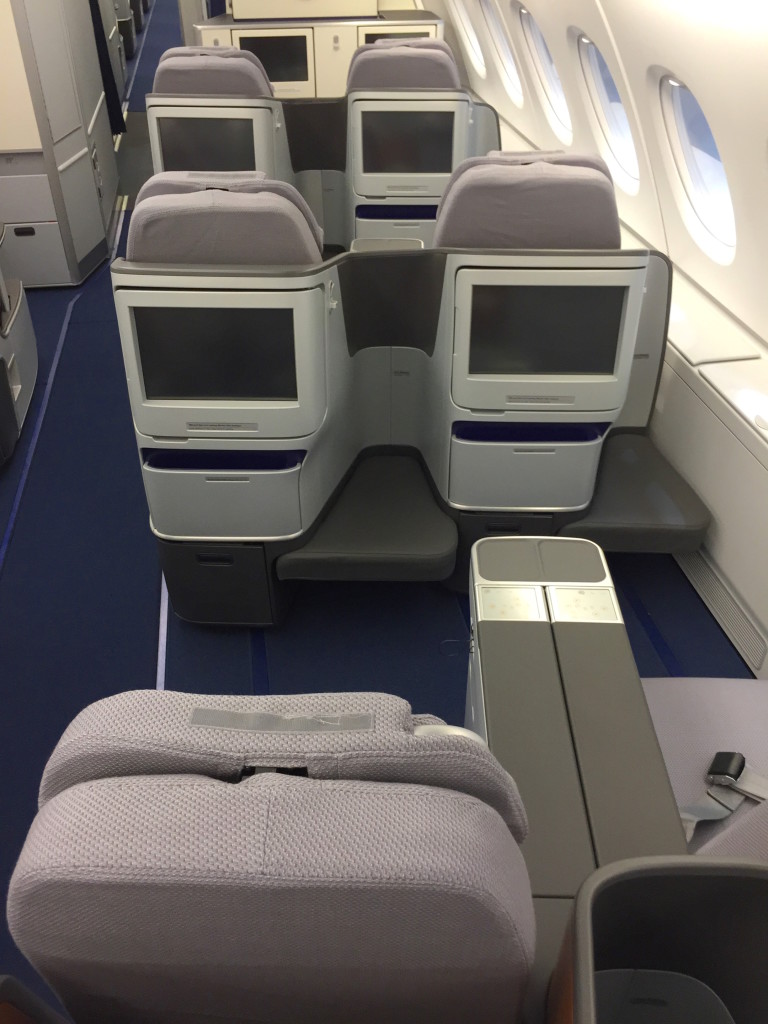 The A380’s new business class cabin is smaller in number of seats, as expected when an airline transitions from an angled lie-flat seat to a fully flat bed, although the drop is only from 98 to 92 passengers when the entire rear section of the upper deck is in business mode.

Yet the airline is continuing to use the wider efficiencies and economies of scale from its Lufthansa Technik MRO operator to adjust the split between business and economy according to demand. On the A380, fourteen business class seats at the rear can be removed to make for a business cabin of 78 seats in total, while 35 extra economy seats are added in the usual 2-4-2 layout of an upper deck A380 economy cabin.

Back upstairs on the A380, some travelers may deem it unfortunate that Lufthansa hasn’t added any new cabin monuments or sound baffles in the large center business class cabin. With the quiet of the A380 and the open style seating Lufthansa chose, a large cabin is a recipe for a noisy snorefest after a plate of Maultaschen and a couple of Augustiner Weißbiers.

And throughout, it’s notable that Lufthansa hasn’t taken the opportunity of a refit to enlarge the swing-up overhead bins into swing-down pivot bins, as on Emirates, Singapore Airlines, Qantas, Etihad and Korean Air, among others.

Downstairs, the big change is a large 52-seat premium economy cabin in the entire front cabin between doors 1 and 2. By contrast, the 747-400 and 747-8I have just 32 premium economy seats, which do not fill a full zone in either aircraft. Lufthansa would seem to be making a big statement about its confidence in premium economy with this refit. 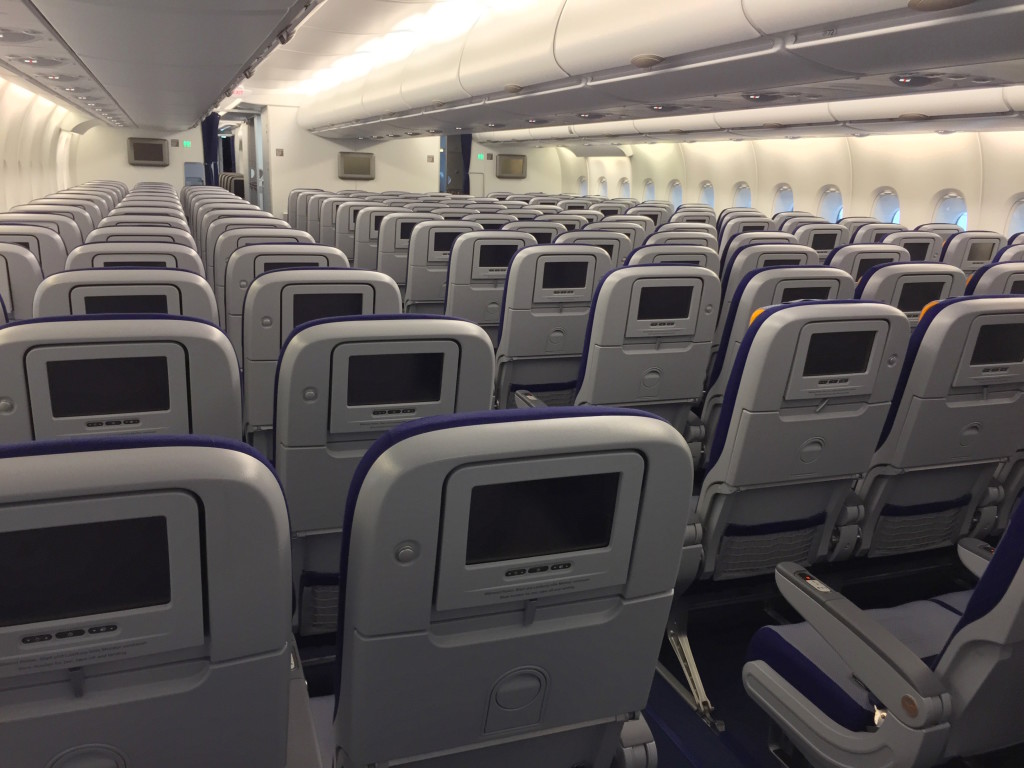 Taken separately, each of Lufthansa’s decisions in its refit Airbus A380 aircraft is an interesting one, but together, they show a number of trends in the airline: maintaining first class despite removing it from some older aircraft, a clear positioning for business class with a hard product that is strategically differentiated from first, betting big on premium economy, and continuing its successful business-economy cabin flexibility.