As passengers we might not relish the idea that seating on the Airbus A320 is poised to get even tighter now that EASA has agreed a path forward for airlines to add a whopping two-and-a-half more seat rows to the narrowbody. After all, no matter how airlines spin it, we know that more seats equals less living space for those of us who fly in regular economy class. But are there safety implications to squeezing 15 more seats into an aircraft that was originally certified for 180 passengers?

Airbus and EASA don’t seem to think so, as the former was able to convince the latter to re-certify the A320 for 189-seats by adding a larger exit door, and widening the evacuation slides. Adding yet another six seats to the narrowbody for a total 195 seats, as recently approved by EASA, will – like any new airline customer cabin layout – require certification “and when that includes a substantial novelty a specific approval from the authorities would be required”, Airbus senior manager media relations trade & technical press Martin Fendt tells RGN.

“We expect this will be the case for a LOPA [layout of passenger accommodations] of 195 seats. That approval will be sought when such a LOPA has been identified for future delivery,” he adds.

Moreover, the airframer says it can demonstrate evacuation of a 195-seater in the required 90 seconds through simulation – i.e. no physical evacuation test with real live people will be necessary. “We believe we can demonstrate the evacuation capacity by analysis based on the tests already conducted to justify the increased credit and also tests results from the original A320 evacuation test. This is the typical approach and means that a new demonstration is not required,” says Fendt.

The fact that a physical demo won’t be required doesn’t sit well with some flyers, who believe regulators on both sides of the pond are moving too quickly to certify high-capacity LOPAs by simply requiring simulation tests.

“Watch what happens in the real world when [passengers of size and] old people try to get out carrying their bags of medicine! The current race to squeeze more and more seats into a finite space is plain stupidity. It will take a forced landing followed by a major fire that kills most of the passengers to change the situation,” suggests photographer and graphic designer Ian Hodgkiss.

“Until comfort and safety return, I will only fly when absolutely necessary. Paying money to be subjected to this type of pain and the risk of DVT from lack of fresh air really is starting to make me think again about going on holiday by air.”

He’s certainly not alone in his concerns.

We recently asked the US FAA if it is conducting any fresh studies into passenger egress in the event of an emergency in light of the now very cramped seating conditions on some aircraft – such as the 10-abreast Boeing 777 and 9-abreast A330 (with seats being pitched much closer together, seats being added to rows, and aisles being narrowed to accommodate the additional seats). Agency spokesman Les Dorr responded, “If the number of seats increases beyond what the airplane was originally certificated for, evacuation capability must be shown by demonstration or analysis.”

He notes that minimum passenger aisle width is regulated by 14 CFR 25.815. Access to emergency exits is in 25.813, and the number of passenger seats allowed is determined by the number and types of exits, 25.807(g). 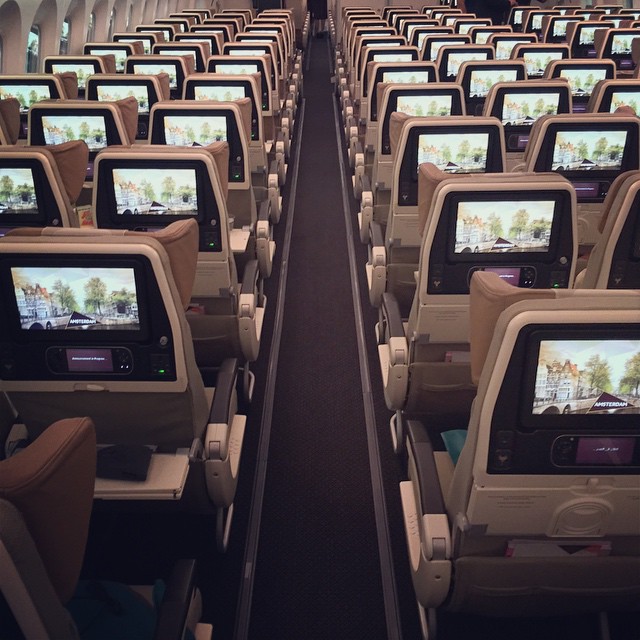 Of course, there are also passenger comfort concerns to consider when packing aircraft to the gills. For instance, will airlines need to reduce seat pitch to 27 inches – a full one inch tighter than the traditional 28-inch standard minimum – to achieve a 195-seat LOPA on the A320? 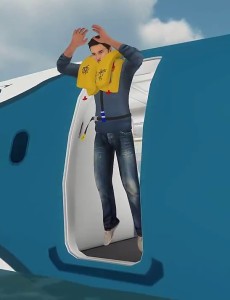 Airbus isn’t saying just yet. “We are always working on space efficiency enablers, and it is too early for us to predict which of them will be used first to enable higher seat counts,” notes Fendt.

However, we know aircraft seat makers have developed 27-inch pitched models, and stand ready to provide these seats to airlines.

One area under study by the FAA is worth highlighting, however. A recent spate of aircraft emergency evacuations have shone the spotlight on the fact that passengers are flagrantly ignoring flight attendant instructions and grabbing their bags from the overhead bins before deplaning via the slides. This slows up the evacuation process, and could ultimately prove deadly.

“Luggage retrieval has always been an issue,” agrees Dorr. “It comes down to passenger education, which is one of our ongoing and primary research topics. We are testing a new serious games app that is geared toward passenger awareness and education about safety and survival in emergency situations.”

The app, featured on RGN  in January, seeks to recapture passengers’ attention and retention of safety briefings.