The aviation industry is coming to terms with a French prosecutor’s assertion that one of its own deliberately flew an Airbus A320 with 150 people on board into a French mountainside. The most likely interpretation of the data so far, according to the prosecutor in charge, is that the first officer refused to open the door of the flight deck to the commander and commanded a loss of altitude.

First officer Andreas Lubitz, 28, reportedly a recent graduate of Lufthansa’s flight training programme, was the sole pilot at the controls of flight 4U9525 according to cockpit voice recorder (CVR) data recovered by Marseille prosecutor Brice Robin, who is leading the criminal side of the investigation.

The as yet unnamed captain stepped out of the flight deck after entering the details of the aircraft’s descent into Dusseldorf. Despite repeated calls by the captain over the interphone and audible calls through the door, as well as attempts to physically re-enter the flight deck — and repeated communication by Marseille air traffic control and other aircraft in the vicinity, plus ATC requests for the aircraft to squawk 7700 — Lubitz did not speak a single word during the eight-minute descent.

Prosecutor Robin, speaking in French, was clear that Lubitz was heard to be breathing normally, leading authorities to conclude Lubitz was conscious throughout and deliberate in his actions, including selecting an altitude that crashed the aircraft. Robin also confirmed that there is no information at this time linking Lubitz with terrorist activity, nor that there is any indication that the act was indeed terrorism. Robin rejected the use of the word “suicide”, noting the number of people on board the aircraft.

(1) During take-off and landing each flight crew member required to be on duty in the flight crew compartment shall be at the assigned station.

(2) During all other phases of flight each flight crew member required to be on duty in the flight crew compartment shall remain at the assigned station, unless absence is necessary for the performance of duties in connection with the operation or for physiological needs, provided at least one suitably qualified pilot remains at the controls of the aircraft at all times.

(a) Except as provided in paragraph (b) of this section, each required flight crewmember on flight deck duty must remain at the assigned duty station with seat belt fastened while the aircraft is taking off or landing, and while it is en route.

(b) A required flight crewmember may leave the assigned duty station—

(1) If the crewmember’s absence is necessary for the performance of duties in connection with the operation of the aircraft;

(2) If the crewmember’s absence is in connection with physiological needs, or— [section covering arranged rest periods and relief pilots omitted]

It would appear that some airlines, notably within the US elect to take other measures — including stationing a flight attendant inside the flight deck if no relief pilot is available, or barricading the forward lavatory with a catering cart, although specific procedures are not specified by the requirements in section 2287 (D) (1) (g) of the regulations.

It’s clear that probing questions will need to be asked about whether these regulations and procedures are adequate.

Under the strengthened cockpit door protocols put in place after the attacks of September 11, the door can be opened only at the discretion of flight crew on the flight deck. A video produced by Airbus provides an in-depth briefing on how the door lock system operates:

A rather chilling decade-old photograph of the flight deck of D-AIPX, the aircraft involved in the incident, also provides context to the situation. 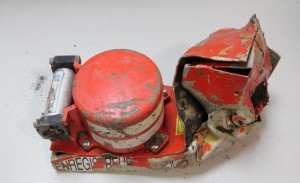 It’s hard to think of a more earthshattering, paradigm-shifting event in the world of aviation safety. As security expert Bruce Schneier explains, there were truly only two things that improved aviation safety in the post-9/11 world: “the reinforcement of cockpit doors, and the fact that passengers know now to resist hijackers”.

After Germanwings flight 9525 — as well as past questions raised by SilkAir 185, Egyptair 990, Royal Air Maroc 630, LAM 470 and other flights — is it time to revisit whether the security provided by passenger resistance might be enough, or whether adequate checks and balances have been built into flight deck security?

Can airlines offer a Gravity-defying experience via wireless IFE?