There is a new reason for airlines and air travelers to worry about the global infatuation with electronic devices powered by lithium-ion batteries. Tests conducted by the US Federal Aviation Administration and the Civil Aviation Authority of Singapore (CAAS) show that airlines that provide tablets as part of their inflight entertainment may create a fire hazard if the devices are stored and charged in galley carts.

Noting that the danger of thermal runaway (an uncontrolled increase in temperature) in the lithium-ion-polymer batteries that are used in tablets is well known, but that the potential fire hazard resulting from tablets being stored and charged in galley carts or a similar enclosure has not been established, CAAS and the FAA last year carried out a series of tests to investigate the behavior of stored tablet fires.

The tests were conducted within a galley cart in a fully-operational but non-flyable Boeing 737 test aircraft. A fire was initiated in one device to see how it would progress. The result was thermal runaway that could create the release of flammable gases, fire and an explosion big enough to blast open the door of the galley cart. In some of the ten tests conducted, fire spread from the ruptured cart to other structures and materials in the cabin. The researchers found that the smoke was heavy enough to interfere with firefighting efforts.

During the tests the tablets were arranged inside the galley cart in order to replicate the way the devices are stored as “proposed by airlines and airframe manufacturers”, the report said. “The risk of thermal runaway” was reduced when the tablets were stacked vertically and with space between them. Further work was needed to determine what kind of a cart would be needed to contain a lithium battery fire.

Hawaiian Airlines offers tablet-based IFE on its Boeing 767s, but spokeswoman Alison Croyle says, “We don’t use charging galley carts.” Croyle says it is more efficient for the airline to charge the tablets on the ground.” TAP has been offering tablets to passengers since December 2014. “One set is used for an outgoing flight and another for an incoming flight, says spokeswoman Isabel Palma. “There is never a need to charge them on board.”

In 2012 the Airline Trends news service reported on the Qantas roll-out, saying:

“In order to keep all 256 iPads onboard the Boeing 767 fully charged for return flights, multiple flights during the day, as well as to simplify logistics, Qantas has partnered with Australian IT equipment designer and manufacturer PC Locs that will see the company deliver a fleet of customised galley carts to support the airline’s new IFE service.

“PC Locs will supply Qantas with iPad charging carts, which essentially are normal galley trolleys that have been re-kitted to store, transport, sync and charge up the devices on board. The iPad carts will be deployed on the airline’s Boeing 767 fleet, which operates on routes across Australia and between Australia and Honolulu, Hawaii.” 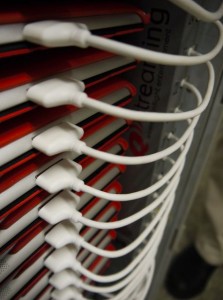 But Qantas appears to have changed course. A Qantas spokesman tells RGN that the airline is aware of the FAA/CAAS test findings from 2014 and that it discussed them with the Australian safety agency to confirm that its own approach – not charging on board – was appropriate. The airline says it recharges the tablets at the airport between flights. Spares are carried to swap out for tablets that run out of charge during a flight.

Bluebox did not reply to several emails asking whether it was aware of the testing and what guidance it was providing to clients. El Al declined to answer our questions.

The potential hazards of lithium-ion batteries on planes has been in the news as several airlines, including Qantas, have announced they will no longer allow shipments of these batteries as belly cargo on passenger flights.

The airlines are attempting to get out in front of a debate scheduled for April in Montreal when an international aviation industry group is expected to ask the International Civil Aviation Organization (ICAO) to issue a ban on the bulk shipment of lithium batteries on passenger airplanes. In its report on the subject of lithium-ion battery safety in aviation, to be presented at the ICAO meeting on dangerous goods, the International Coordination Council of Aerospace Industry Associations concluded: “The knowledge that the volume of such cargo is continually increasing requires action to be taken.”