This week, a battery caught fire in the overhead bins on a KLM 777, Qantas became the third airline to refuse freight carriage of lithium battery shipments, and Air France’s new safety video has started warning passengers not to move their seat if they lose their phone between the cushions. It’s time to talk about lithium batteries in PEDs.

With images and video circulating from yet another battery fire in an airline cabin — this time on board KLM 876 from Amsterdam to Bangkok — air safety regulators don’t seem to be on top of the problem. A compounding factor: the cabin crew actions in the video are not entirely in accordance with IATA safety guidelines.

RGN asked each of the regulators, the trade association and the UN body about their research into: the number and capacity of these batteries carried on board by passengers, the safety implications, any trends concerning the regulator, known airline work to ensure safety or improve passenger education, the role of airport security, work concerning the onboard response to battery fires, questions about whether locations along the lines of the Least Risk Bomb Location (LRBL) have been identified for battery fires, and what actions passengers should be taking.

To be crystal clear, our questions at this stage concerned the safety implications of lithium-ion batteries carried by many passengers for their own PED use, not their shipment as underfloor cargo on passenger jets or via dedicated cargo carriers. Equally, the specific use of batteries for mobility equipment for passengers with mobility restrictions — which is a significantly rarer occurrence with specific and understood guidelines — is not at hand here.

Paraphrasing, all regulators and stakeholder groups say they have concerns about PEDs, and in a few cases have recently started working on crew education, but are seemingly not concerned enough to be taking meaningful or effective action to raise passenger awareness.

Part of our concern is that none of the organizations RGN queried know how many batteries are taken on board aircraft.

The FAA gave a non-answer to the question of whether it has research about the number of batteries on board, which we take as a ’no’. It referred RGN to 2012 data that was the result of an APEX-CEA survey around understanding of the rules in place at that time around PED use below 10,000 feet. That report contained no information about the number of devices carried on board.

The FAA’s recent partnership with the UK CAA on a series of industry-focused education videos suggests the two principal Anglophone regulators’ work is in alignment, however. 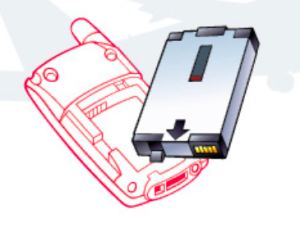 IATA’s idea that cellphones look like this is perhaps telling about the industry’s level of understanding.

“We have not done any research, but anecdotally it is clear the number of spare Li-ion batteries being carried by passengers is increasing,” the UK CAA told RGN. EASA also confirms it has not done research, but suggests most passengers board with between 4-5 battery-powered PEDs. ICAO did not answer the question.

IATA noted that “We don’t have any specific data for passengers, but 3-4 probably is a reasonable number. Laptop, mobile, tablet and maybe a power bank to charge the mobile phone.”

Both those ranges seem very low for a modern traveller. US airline Delta lists 18 different types of PED on its website.

Crew information appears to be the current focus, mainly through IATA

Airline trade association IATA appears to be taking a significant lead on crew education, with its 45-page Lithium Batteries Risk Mitigation Guidance for Operators (PDF) an updated and useful guide.

New cabin crew “procedures have been developed by the IATA Cabin Safety Task Force in conjunction with ICAO and will be incorporated into the 2015 – 2016 edition of the Red Book [ICAO Emergency Response Guidance for Aircraft Incidents Involving Dangerous Goods, Doc 9481], although it is strongly recommended the new material is introduced into cabin crew procedures with immediate effect,” IATA says, including the procedures in its guide.

IATA’s guide also includes stills from a video jointly produced by the US FAA and UK CAA, aimed at airline cargo handlers and cabin crew. Released on YouTube a couple of months ago, it is educational, though perhaps a trifle stilted and with some bemusing stock video. Notably, it features some demonstrations by Virgin Atlantic crew in the airline’s cabin training mockups, and Virgin is to be praised for its participation here.

Notably, none of the organizations RGN queried were working on identifying a lithium-ion battery incident equivalent to the LRBL (Least Risk Bomb Location). Given the prospect of uncontained fire, it seems incredulous that there is not a standardised place of least risk where it is safest to fight a battery fire and secure a device under observation, all other factors taken into account. 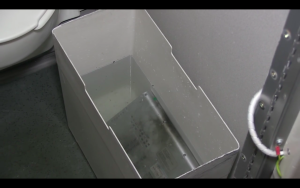 IATA’s guidance suggests using “a pot, jug, galley unit or toilet waste bin” as a reasonable ad hoc container, but consideration should surely be given to a standard receptacle — perhaps fireproof, fold-out and large enough — for use in containing, inundating and securing devices, and for a few standard locations within the cabin by aircraft type.

Indeed, video from the recent KLM fire would seem to show extinguishant being applied to an item on a seat rather than an item being doused or submerged as per the IATA guidance. A review of the incident needs to be conducted to determine whether procedures were followed, or whether the on-the-ground timing of the fire was just a lucky break for a 777-load of people who were put in danger by an incorrect response.

At the end of the day, crew aren’t the entire answer to the issue. Every single one of the organizations RGN queried stated that security screening of cabin baggage was not part of the solution. Yet as one of the very few touchpoints all passengers must pass, and the only point at which cabin baggage is usually screened, is this a missed opportunity?

Furthermore, “it’s likely that you will first become aware of a problem by being notified by a passenger,” the UK CAA’s video says to crew.

Of course, as anyone who’s ever struggled to get a refill on a glass of water onboard will know, levels of cabin awareness and monitoring vary widely between and within airlines.

In the same way that crew now expect passengers to deal with disruptive or dangerous passengers, the focus needs to be on educating passengers on how to reduce the risk of a battery fire and what to do in the event one occurs.

EASA told RGN that “Passengers should be aware of the potential risks posed by batteries and comply with the battery-use instructions when travelling. If they see signs of a battery being defective, they should immediately discontinue its use and properly dispose it.”

Yet how and why do passengers develop that awareness? How many people bring their battery instructions with them — or even received instructions? What are the signs of a battery being defective? What is the ‘off off’ rather than sleep mode setting to “discontinue its use”? What is proper disposal?

IATA’s risk mitigation guidance identifies 22 ways in which airlines can inform passengers about lithium battery risk from batteries they are carrying, yet remarkably few effective campaigns have been implemented.

Unusually, Air France’s new “flying is chic” safety video tells passengers what to do if their device falls into their seat.

“In case of the loss of an electronic device,” the airline says starting at about 3m20s in the video, “please avoid manipulating your seat and call a crew member”.

Air France’s notification is of particular interest given the known issue with the airline’s angled flat business class seats crushing phones that slip between the cushions.

And that’s it. Apart from an occasional “do you have any batteries in your checked luggage”, even frequent flyers aren’t exposed to standardised messaging or any particular public awareness campaign.

Regulators and IATA are using different measurements than manufacturers

A good first step in passenger education would be to start measuring batteries in the same way that manufacturers and retailers do. Where any advice or warning is present, it measures batteries in watt-hours (Wh), a unit of energy, rather than milli-ampere hours (mAh), the unit of charge.

RGN followed up with the UK CAA about the reasoning behind the decision to outline energy in Wh rather than charge in mAh as the measurement for batteries.

The UK’s CAA argued that: “Wh is the official measurement for lithium batteries, manufacturers must use it. Some retailers also use mAh however,” pointing us to this page that includes the tricky conversion between the two units that also requires the voltage of a battery — though surely even fewer people will know the voltage of their internal battery than know its charge in mAh.

Whatever its electrical engineering reasons for choosing Wh over mAh, the CAA clearly isn’t in the same reality as manufacturers or retailers, who quote charge in mAh and not energy in Wh to customers, even on the UK-specific sites with which the CAA should surely be familiar.

IATA’s currently issued passenger pamphlet — which is dated 2010 but which this constantly travelling author has never seen in the wild — similarly lists Wh as the units of measurement. (It could also do with using a representation of a mobile phone produced in the last ten years.)

The bottom line: Passengers aren’t going to stop carrying PEDs. Batteries are getting more powerful and more numerous. Flights are getting longer and ETOPS times are being extended. The industry needs to act now before an aircraft is put in serious danger.