Over the last year RGN has raised successive questions about the suitability of the current generation of airline seat safety certification.

As passengers get taller, broader and heavier, continuing to use the same dummies to simulate passenger impacts in the event of an incident will not adequately represent the passenger mix on the aircraft.

Similarly, with an aging population in many more developed countries, questions are being asked about the extent to which airliner safety certification reflects the differing likelihoods of older people, whose bones may not have the same strength as younger people, being injured. 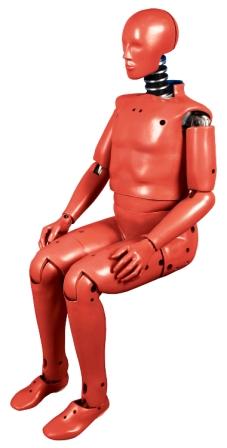 The historical reason for using what are now overly small dummies is as simple as it is surprising: it’s what the automotive industry has always used.

But the problem is that seatbelts sit differently on larger people than they do on people the size of the test dummies, which weigh in at just 167 lbs (76 kg), much the same as the standard 164 lb (74 kg) FAA Test Dummy.

Automotive industry research suggests that larger drivers and passengers are substantially more likely to suffer injury — 78 percent more likely, according to Christopher O’Connor, CEO of Humanetics, the only US producer of crash test dummies, which also manufactures the standard FAA Test Dummy.

“Having a body mass index (BMI) of 35-39.9 increases your risk of death by 51 percent” if involved in an accident, O’Connor concluded in a feature in Crash Test Technology International.

In particular, larger women are most likely to be injured as a result of weight distribution and where the seatbelt sits on their bodies.

As a result, Humanetics is creating a larger dummy to more adequately simulate what happens to larger people in an automotive accident. The new generation of crash test dummies will weigh 271 lbs (123 kg).

The aerospace industry, meanwhile, uses a 2000-era combination of Humanetics’ Hybrid II and Hybrid III dummies called the FAA HIII-50th Dummy, based on the 50th percentile height and weight of a US male population that no longer seems representative of the 70 percent of Americans who fall into a category of “overweight” or larger.

Both the Hybrid II and FAA dummy (which Humanetics says “improved biofidelity in the head and neck”) are mandated in Title 14 of the US Federal Code. Notably, the buttock-knee length for the FAA dummy is 23.3 inches (59.2 cm). With many passengers reporting that their knees touch the front of seats at 30” pitch (let alone the 27-28” pitch that is increasingly seen on LCCs), 23.3″ seems a worryingly small amount of clearance.

DUMMIES REPRESENTING OLDER PASSENGERS ARE NEXT

Airline safety regulators will want to adopt these new dummies at an early stage to ensure the safety of all passengers on the aircraft. How will slimline seats fare in testing?