In what could be perceived as a quiet downgrade for business class passengers, Lufthansa is keeping middle seats on its Boeing 747-400 fleet when it removes its old angled lie-flat seats. On the plus side, however, the airline is also largely abandoning the unpopular “footsie class” V-shaped seat pairs on the refit 747s.

The aircraft are moving from a first-business-economy three class configuration to, initially, a two-class business-economy layout, and then a three-class business-premium economy-economy option. Business class will feature Lufthansa’s latest fully flat bed, released in 2012 with the launch of its 747-8 fleet.

But Lufthansa has opted largely to eschew the “footsie class” reverse V layout introduced on the 747-8I, where passengers’ feet were separated by only the thinnest of partial dividers, as pictured below. 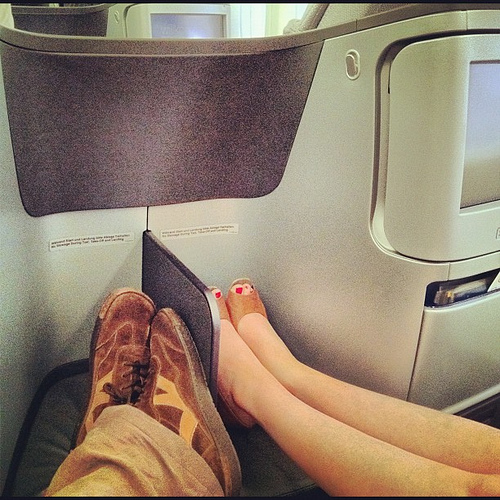 Instead, the 747-400 fleet will see primarily what Lufthansa calls the “H-layout”, first introduced on the narrower cabins of its A330 fleet. It’s reminiscent of the B/E Diamond product, where seats are angled away from the aircraft centreline and passengers have their own personal footwell to the side of the seat in front. 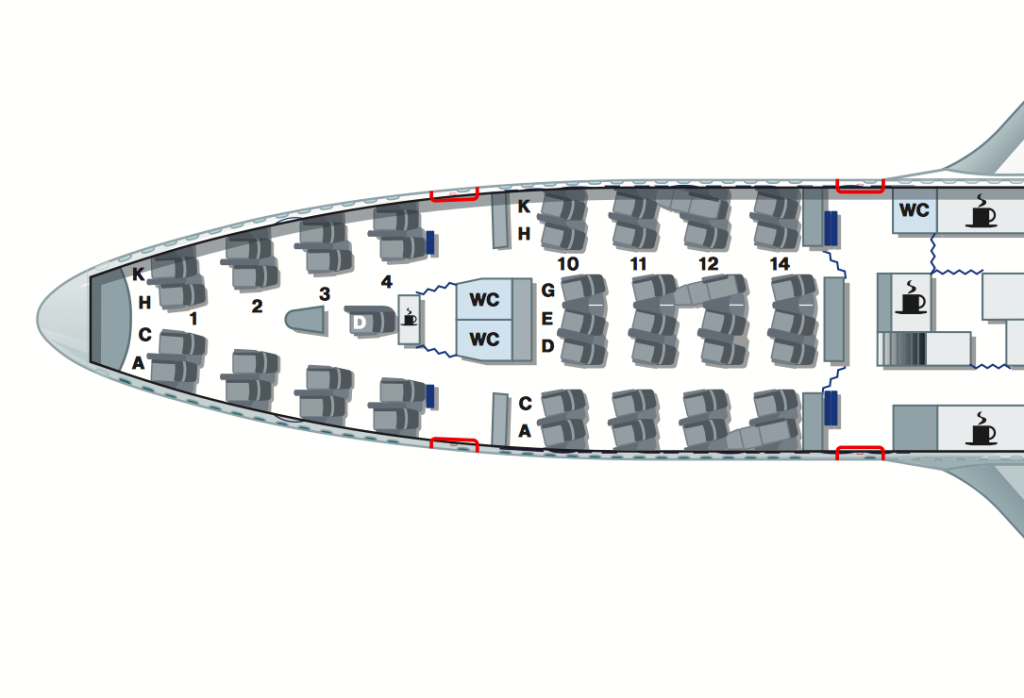 But the exception will be in seats D, E and G in the centre section of the full-width main deck section, where seats will be arranged in this type of a pattern: / / \. Seats E and G will point together, with D parallel to E.

Even the upper deck will be different, in the full H-layout rather than the V-layout seen on the 747-8.

It’s a brave move from the German airline, which was one of the last entrants into the market for fully flat beds while the majority of its competitors (not to mention its alliance partners) were already moving towards a fully flat bed with direct aisle access standard.

From a #PaxEx perspective, business class passengers dislike having to vault like an antelope (or hippo) over an aisle passenger in bed mode next to them. This “midnight clamber” is even worse in middle seats, where there’s not even the mitigating benefit of a window.

On a positive note, the H-layout product is less problematic for the “midnight clamber” than the V-layout. On the V-layout, the lower section of legrest that meets the foot cubby doesn’t allow for any room to get a foot down to the floor when trying to climb over. So the window or middle passenger will need to engage the seat motor to put their seat up, climb over the aisle passenger, and repeat in reverse when returning to their seat. At least there’s a bit more spacing between seats in the H-layout.

Yet the middle-seat product will be offered on a selection of premium routes where the competition (and, again, partner airlines) can offer a superior product — few second-rung destinations or mid-haul markets here. According to online schedules, the aircraft will fly from Lufthansa’s largest hub, Frankfurt, to destinations including Dubai, Toronto, Vancouver, Denver, Boston, Washington, Seattle, Mumbai, Shanghai, Seoul, Tokyo Narita and Osaka Kansai.

British Airways designed the fully flat bed in business class over fifteen years ago, putting it into service in 2000. While BA is still installing its refreshed 2006 product on newly-delivered A380, 777-300ER and 787 aircraft, patent filings have also revealed that it is considering a direct aisle access seat, designed with longtime design house Priestmangoode.

It seems Lufthansa’s Boeing 747-8I retrojet — due to be painted in its classic livery next year — isn’t the only 747 where the German airline is rolling back the clock.

RGN Premium: A big claim out of NBAA next week

United taps Gogo for Wi-Fi on RJs, agrees to trial 2Ku on 757s