How do you convince customers to buy your premium product? For most companies it generally involves hyping the value proposition. For airlines it can also mean making a case for conspicuous consumption or speaking to the premium value realized from better catering, ground handling and the onboard experience. And then we have United Airlines’ CFO John Rainey. His approach is rather different.

And here’s the rub: He’s not wrong. 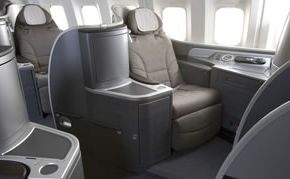 Certainly for United’s product the spread on meals is almost nil; ground and inflight service are not much different either. Some premium customers might suggest that United’s Global First has seen a decrease in quality over the past few years but that’s much less significant than the increase in value that full-flat Business Class has brought into the market. It is much harder to convince passengers to buy the premium product when the next option down is sufficient, and has the same ability to lay fully flat.

Stories discussing the death spiral of First Class have been circulating for years now; United is not the only airline with executives making such comments. Christoph Franz, former CEO of the Lufthansa Group spoke out last year against flat beds in Business Class vis a vis First Class cabins. Even as some airlines add opulent premium products such as Etihad’s Residence suite, there are also cuts happening within similar markets. Singapore Airlines, Emirates, Qatar Airways and others are reducing the number of First Class seats they offer across their fleets. These carriers considered to be atop the First Class world and even they are seeing slack in demand.

A significant difference for United (and the other US carriers) versus their competition in the shrinking First Class market comes in the space between Economy and Business Class. Premium Economy is the latest salvo in the game, a product sufficiently more comfortable to justify a reasonable premium on fares but not so expensive that travel budgets are blown. But US carriers have taken a very conservative approach to the Premium Economy space. They generally offer extra pitch but not a truly separate cabin with different service levels.

Lacking any innovation at this tier while also cutting at the top fulfills Rainey’s view: No one is buying the product because there is no compelling reason to do so. Rainey has never been shy about speaking his mind, so maybe this is United’s new approach to the market.

Contactless EMV payments make sense for iPhone; what about IFE?