As Bombardier’s CSeries CS100 flight test vehicle, FTV2, returned to skies this week the Canadian airframer confirmed it is adding aircraft interiors to its fifth testbed and is working to ensure that airlines can enjoy maximum flexibility as they define their cabins on the new-design twinjet. Bombardier reveals that wireless IFE is now an option for CSeries customers; Ku-band inflight Internet is on offer and other connectivity solutions are under study, and it is eyeing a new dual aft modular lavatory concept.

“We are starting to fill interiors on number five; this will have the whole set of interiors and the seats. It won’t have IFE to start with because it’s really about getting certification so IFE will be installed later,” Bombardier CSeries program director Sebastien Mullot tells RGN.

Early on in the CSeries program Bombardier selected C&D Zodiac – now called Zeo – to develop the entire CSeries cabin. This relationship has taken risk out of the program, says Mullot. “The fact that we had C&D Zodiac from the get-go on the program…meant that we agreed on a certain level of ramp-up. We wanted to make sure we had the ability to meet requirements, and had no concerns about whether they could support us on the program. That’s one of the beauties of them being the supplier.”

Zodiac seats are also offered in the CSeries catalog. “Zodiac has the two seats offered to date, an economy plus type of seat and the Dragonfly [slimline economy] seat, which is mostly for tighter pitch and operators concerned with low-cost operations,” notes Mullot.

But Bombardier is also willing to allow customers to select seats outside of the catalog for the five-abreast aircraft (configured 2-3 in economy). “We have to be pragmatic, driven by customer needs, and listen carefully to what our customers are saying and we also recognize that in a lot of cases cabin is the key branding feature of the airlines, and therefore they are very keen to maintain the branding across their fleet so we have had to, for flexibility, accommodate some BFE [buyer furnished equipment] requests, mostly on the seat side. But smaller sized customers and fleets – those that don’t want to go through the hassle – can get aircraft that is fully furnished [per the catalog].”

This flexibility could be seen as a selling point for the CSeries, as airframers usually try to stay within the boundaries of a somewhat rigid catalog approach to ensure aircraft programs remain on track. 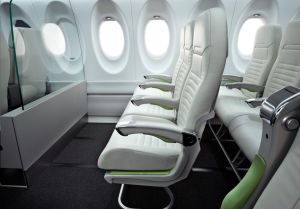 CSeries economy-class seats to be the widest in the sky

From a passenger experience standpoint, Bombardier continues to believe its decision to offer the widest seat in the industry – a 19-inch wide seat for the seat triple’s middle seat and a width of 18.5 inches for all other economy class seats – will ensure comfort even when airlines opt for the high-density, 160-seat version of its largest CSeries, the CS300. Seats can be pitched from 28 inches to 32 inches in economy.

“The CSeries was designed from the inside out with the customer in mind. We looked at it for overall living space. Pitch is very important but I think living space is very important, so the fact we have the widest seat in the industry – more width in the middle seat – will make a big difference. The CSeries is a pretty wide cabin and there is a lot of light coming into the cabin so this will make the experience more appealing and make passengers a bit more relaxed.

“I’m sure you’re seeing a lot of debate going on with seat width, with the two big guys [Airbus and Boeing] fighting it out. I think in the end it’s the airline’s choice  to drive the level of comfort they want to bring to passengers. The reason we went for a wider seat – and took a hit on weight – is we know the worldwide population is not getting any thinner or shorter, so there is a demographic trend here that is tough to ignore.”

Just as Airbus and Boeing are introducing modular lavatories to their narrowbodies, Bombardier is “thinking of putting a new concept on the aircraft”, a dual aft lav concept instead of a full galley, reveals Mullot. “The CSeries has a big cross section so we could accommodate two lavs and a half galley.” He confirms that Bombardier is working with Zodiac on the design.

In May Bombardier announced that Panasonic Avionics’ Ku-band connectivity service would be offered as a linefit option on the CSeries, and that it had completed installation of the Ku antenna on CSeries flight test vehicle one (FTV1). But, in the cabin, Bombardier’s philosophy for connectivity is to remain agnostic.

“The goal is to be able to meet all of the customer needs, and the way we approach it is really a matter of prioritization based on the customers’ request, and what they’re asking for. We acknowledge that we made an announcement recently regarding Ku-band connectivity; that was driven by customer interest, but as I might have told you in the past, our goal is to be able to offer various connectivity solutions. It’s something we monitor very closely,” says Mullot.

Majid Louis, product strategy manager for the CSeries’ cabin avionics, adds, “We have spent an extensive amount of time studying all of these systems to understand what technology we need to accommodate [customers]. There are a lot of provisions, ATG, Ku and Ka antennas. We have been in touch with Gogo for testing.”

Both Thales and Panasonic IFE  systems are offered in the CSeries catalog. “Because it’s complex and expensive, we asked ourselves – do we need seat-back IFE? But it’s not going away immediately [in the industry].” On the contrary, says Mullot, “There has been clear interest in taking seat-back IFE from some of our customers. There are some specific markets, some regions more attracted to do that than others. But there will be seat-back IFE; I’m convinced of it.”

Wireless IFE will also be an option for CSeries customers. “We will use the system from Panasonic for media broadcast to passenger devices. It’s something that we’ll be testing,” he says.

This will further increase Panasonic’s content on the CSeries. From the get-go, Bombardier has worked with Panasonic on the Cabin Management System (CMS) product. “The fact that they were able to meet requirements and interface with our backbone was obviously very positive, and to be frank they have done a very good job on the CMS and have proved to a be a very reliable partner and supplier on the program.”

Louis adds, “Panasonic has the widest portfolio on the IFE market, from [inflight connectivity] to CMS … this is something we do not find in any other supplier. They are not a paper system.”

Bombardier has 203 firm orders for the CSeries, and over 500 commitments, but it aims to secure at least 300 firm orders before the aircraft enters into service. The CSeries program was grounded for three months due to a problem with its Pratt & Whitney geared turbofan engines. Swedish firm Braathens Aviation says it will not serve as launch operator of the first CSeries due to increased uncertainty about delivery delays. Bombardier insists the CSeries’ entry-into-service “remains on track” for the second half of 2015.