Using today’s small aircraft lavatories requires even the most physically mobile passengers to be dexterous and flexible. But what do you do if you’re not able to easily squeeze into or navigate your way around those tiny compartments? What about passengers with reduced mobility (PRMs)? We’ve heard some horror stories about PRMs trying to use the lavs on board aircraft, and the indignities they suffer.

Airbus wants to accommodate these passengers. It does so splendidly with its original ‘Space-Flex v1’ configuration for the Airbus A320, which rearranged the footprint of the rear galley by placing the two lavatories together. This not only added three seats (six if a full galley wasn’t necessary), but also catered to PRMs with a retractable partition between the two lavatories. It is currently flying on A320s operated by TAM, LAN, Pegasus, and Loong Air.

The airframer says Space-Flex v2 builds on the in-service experience from Airbus’ Space-Flex v1 as well as market feedback from Zodiac Aerospace’s hugely popular “Innovative Space Interior System”. Thanks to a more optimized centre lavatory design, Space-Flex v2’s enlarged galley area will accommodate up to eight half-size trolleys (or three full-size plus two half-size trolleys), as well as the two lavatories – of which one is PRM capable.

But – and this is a significant “but” – the second iteration is not nearly as PRM-friendly as the first version. 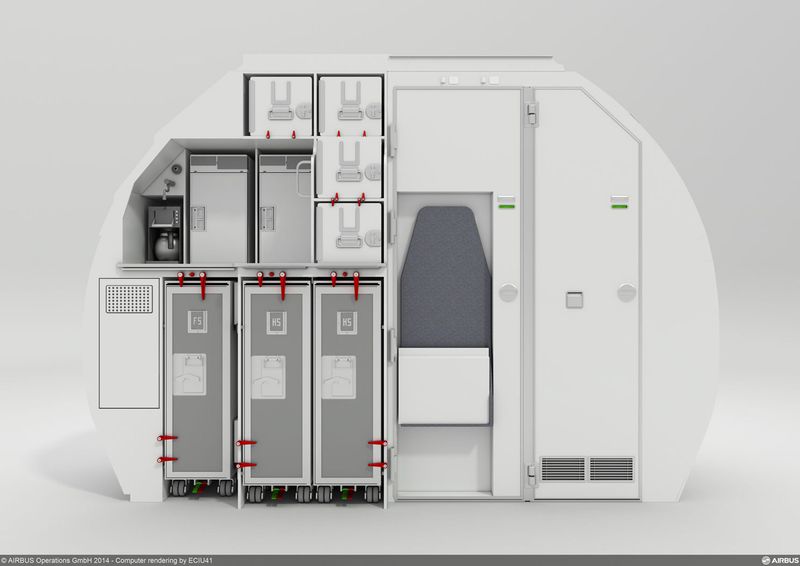 A second option of the integrated “Space-Flex” PRM lavatory and galley module, to be developed by Airbus and Zodiac Aerospace

“For Space-Flex v2, the swinging partition separating the two v1 lavatories is replaced by a fixed partition featuring a tip-up seat. The wheelchair bound passenger transfers from the wheelchair to the tip-up seat and then, unassisted, to the toilet seat. So we now have two Space-Flex options. Both maximize the efficiency of space at the back of the A320 Family to allow extra revenue generating seats in the cabin,” says an Airbus spokesman.

He notes that airlines make the ultimate choice.

By combining Space-Flex with reduced aircraft seat pitch, seat count on the A320 can be increased from a current maximum 180 seats to 189. Space-Flex v2 is expected to be introduced in the first quarter of 2016.

The news that aircraft seat pitch will be tightened to accommodate 189-passenger A320s is not new. And it certainly highlights a far broader trend in the industry to fit economy-class cabins with high-density configurations.

Airbus maintains that seats with 18 inches between the armrests can afford to have a smaller pitch, thus allowing for extra seats without sacrificing comfort. The wider cross-section of the A320 accommodates this 18-inch width, a comfort standard that Airbus actively promotes.

A survey conducted by the airframer of approximately 40,000 participants found the majority felt they had more room for their legs and knees when they had 18 inches between armrests. Personally, I too felt quite comfortable in sample seats displayed at Airbus’ booth during last week’s APEX Expo, though it has been pointed out that at 5ft 5in, my knees aren’t exactly “high risk”. It’s also worth noting that as soon as the seats recline, everyone will imaginably be a little unhappier, though some carriers have handily eradicated this problem by not offering reclinable seats on short-haul flights in the first place.

The forthcoming re-engined A321neo will also feature increased seat count, which will be achieved by removing Door 2 and replacing it with two over-wing exits. Combined with Space-Flex v2, seat repitching, slimline seats, increased exit capacity, and Smart-Lav (a new efficient lavatory design) the seat count can be brought up to 240 from 220.

With new passenger space comes the need for more overhead bin space. Confirming a story we broke last year, Airbus has launched a new pivoting bin solution, which allows for 60% more bags. The bins  are designed to accommodate eight standard rolling carry-ons across four frames (as opposed to the present five suitcases across four frames). Because more and more passengers are traveling with rolling carry-on luggage, Airbus created bins tall enough for suitcases to be stored on their sides, which will require some passenger reeducation. The move will ensure Airbus can better compete against Boeing, which recently introduced new Space Bins for the 737. Delta is the launch customer of Airbus’ new bins, which are expected to enter service on the carrier in the first quarter of 2016.

Meanwhile, all of these planned changes will equate to more revenue for airlines. Airbus head of aircraft interiors marketing Zuzana Hrnkova says a 1% increase in revenue is equivalent to reducing maintenance costs by 10-11%; rentals, depreciation, and insurance by 8-9%; fuel cost by 4-5%; and cash operating cost by 2-2.5%. That’s certainly good for airlines, but we know that the best news from this announcement is that PRM-friendly lavatories are becoming a fixture on new aircraft. And Airbus and Zodiac will see to it. 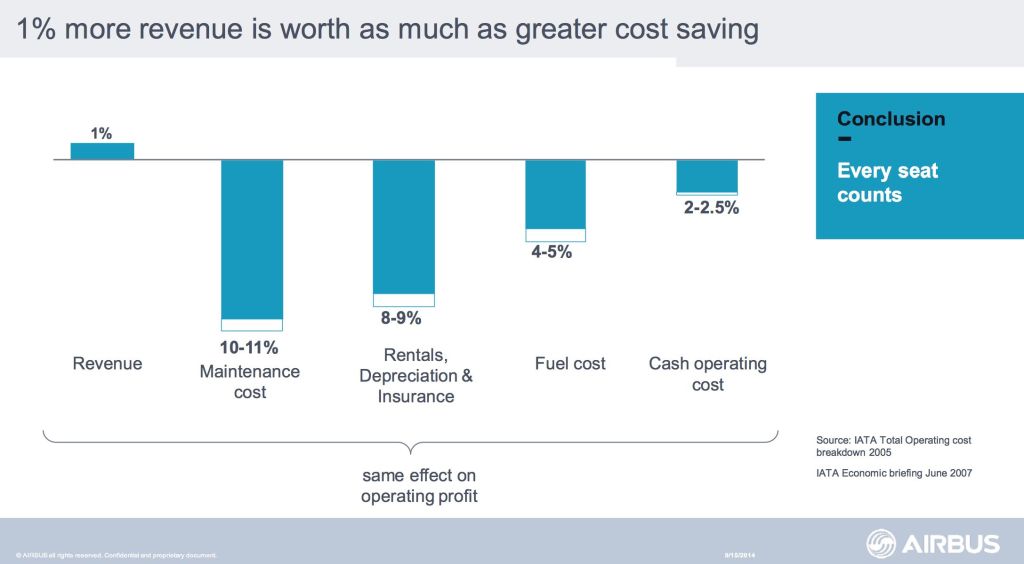