If foot traffic around Lufthansa Systems’ booth at the APEX Expo last week was any indication, the company’s new integrated tablet IFE solution is giving airlines something to think about.

The simple, semi-embedded concept comprises a frame built into an economy-class seat, which holds an airline-provided COTS tablet that can be switched out for newer models as technology evolves. Content is streamed wirelessly to the device from the onboard server.

“The server and the access points of our BoardConnect wireless IFE offering stay the same. The in-seat tablet would stream and not be wired except for the power supply. It’s really flexible,” says Dr. Jorg Liebe, CIO of Lufthansa Systems.

“As we all know there are some airlines that really bank on the trend that passengers will simply use their own devices, and there are other airlines that say ‘no’, and we want to provide them with an in-seat-like solution. The integrated tablet solution is a perfect way to keep the benefits of a personal electronic device solution and still give you an in-seat feeling.”

But the lightweight offering ticks another important box for airlines and passengers. By using airline-provided tablets – which meet Hollywood’s security requirements – early window movie content can be streamed to the devices. At present, Hollywood disallows the streaming of early window to passengers’ own devices. 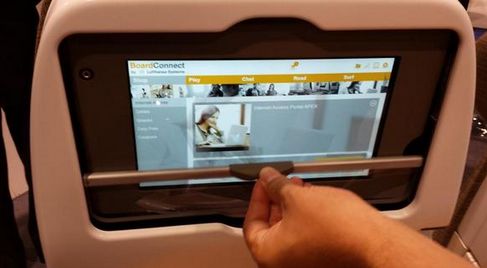 For added redundancy, Lufthansa Systems could also make the solution “seat-centric”, in other words, store content on the tablet in addition to streaming. “It’s an added feature…and you can update the tablet without modifying the seat,” says Liebe. Such a move would more firmly pit Lufthansa Systems against bigger IFE companies in the market, including Panasonic Avionics, Thales Avionics, Lumexis and Zodiac Aerospace – all of which offer varying levels of seat-centricity for content.

Liebe says Lufthansa Systems is certainly prepared to respond to the myriad airline RFPs for seat-back IFE with this integrated tablet. A screen is pulled up over the tablet to ensure it passes head impact criteria certification though this particular feature generated some questions on Twitter about the durability of such a screen, and whether or not passengers would know to use it.

“The driving force behind this development is we want to keep staying lightweight and wireless. But we also want to utilize the consumer electronics industry’s funding [of innovation] to increase the benefit technology-wise for airlines. So we’re tapping into consumer electronics. And if, for example, the industry opts to offer a 3D feature in a year or two – something you don’t have anywhere in IFE right now – airlines could offer it when it’s available by simply upgrading to a new tablet. So we have more flexibility than embedded IFE guys because we can always upgrade,” says Liebe, adding that changing the tablet does not require a change of frame or recertification. “So airlines can plug in a new tablet every two or three years to keep up with the capabilities on the ground.”

Though the company declined to name its partners, attendees at the APEX Expo observed that the tablet was integrated into a seat built by Recaro.

“We see growth in both portable and wireless IFE. As a provider we see the need to be flexible and that is why we invested in more flexibility [with the integrated tablet solution]. We also see a big trend for pure wireless IFE on narrowbodies, and wireless IFE in tandem with inflight connectivity. There are a lot of tenders out there now,” says Liebe, who is among the list of esteemed speakers slated to present this week at the Cabin Integration Symposium, held immediately in advance of the Future Travel Experience Global 2014 conference in Las Vegas.