The A380 was designed in a world before the global financial crisis, and carriers that took delivery of early examples were challenged to fit a plane designed for large premium cabins into a market where the demand for these cabins was drastically reduced.

The first 25 examples were delivered to Singapore Airlines, Qantas, and Emirates, all of which took different approaches to cabin layouts. While there are outliers, the seat counts on today’s A380s generally fall between 480 and 510 passengers, with economy seats accounting for 80-85% of total seat count, and business class 12-16% (see full chart below).

Qantas A380’s originally had 450 seats, but were later reconfigured, removing 12 business class seats and adding 39 economy class and 3 premium economy seats, bringing Qantas A380’s into line with market average. Singapore Airlines’ first 11 A380s were delivered with 471 seats, however the last 8 came with 409. This is the second lowest seat count amongst A380 operators, after Korean’s 407 seat models. These aircraft are dedicated to operating Singapore’s premium-heavy Los Angeles via Tokyo, and New York via Frankfurt routes, as well as services to London Heathrow.

British Airways A380s are below average as far as seat count, and above average in the percentage of business class seats. BA has the highest density business class amongst A380 operators and is also one of three A380’s operators to offer a dedicated premium economy cabin. Emirates, the largest A380 operator has two A380 variants with either 489 or 517 seats. Both models have the same number of first and business class seats, with 28 economy seats being replaced with a crew rest pod for ultra-long haul operations. Qatar’s A380s will have the smallest proportion of premium seats in the market when they enter service later this year.

Etihad’s recent launch of their A380 premium cabins has drawn both admiration and criticism. Some feel that the level of opulence on display in the Residence and the Apartments is both financially unviable, and comes at the expense of economy passengers. This is not entirely accurate. Etihad’s seat count falls right in the middle of the range with 497 total seats, of which 84% are economy and 14% are business. Etihad has 3 more first class seats than Lufthansa[1], 3 fewer than Emirates and all three carriers use Zone E, the forward most cabin on the upper deck for their first class cabins.

Etihad’s creative layout, as well as the innovative use of otherwise-unused space to create The Residence’s bedroom, have allowed it to charge a premium over other carriers for roughly the same amount of total cabin real estate dedicated to first class. For airlines, the challenge with A380 first class cabins is how to create an experience worth paying a premium for, when international business class cabins have closed the gap so rapidly.

Etihad has risen to that challenge admirably.

Certainly, the Gulf carriers will be among the last to let go of first class, if ever, partly through vanity, and partly because it still makes sense. But an interiors insider tells us, “It will come and I think as soon as one jumps, they will all go… certainly the YC cabins for all Gulf carriers have a two-class passenger occupancy..!”

BA World Traveller Plus is one of the successes of the last decade. Lufthansa has announced plans to launch a premium economy product. “I don’t think the Gulf carriers will be able to ignore the numbers for much longer,” says our source. Neither too will US operators. 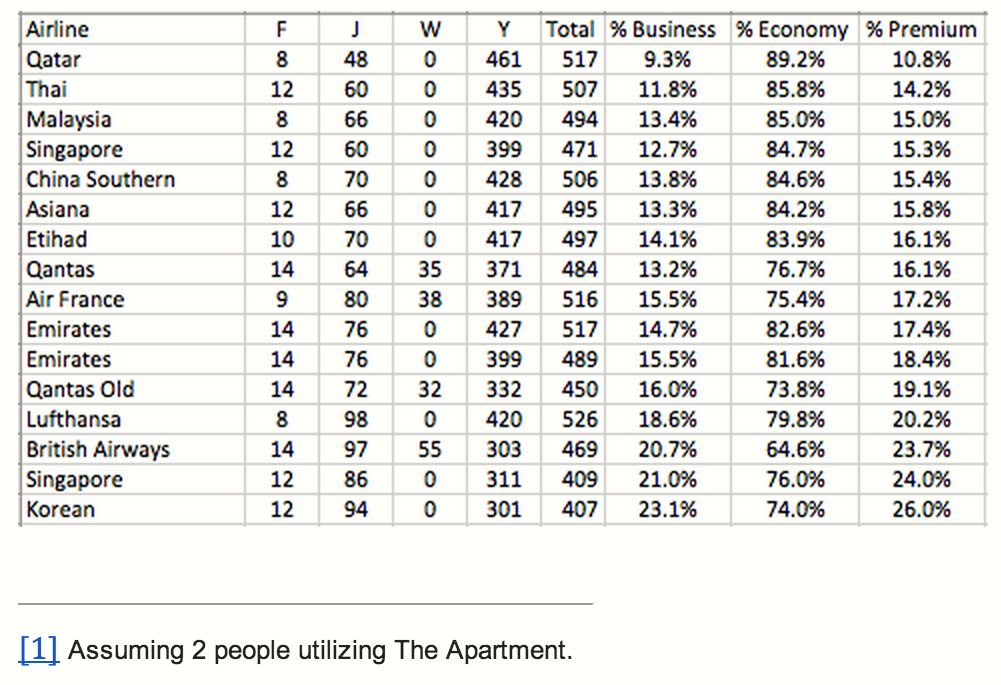