Ryanair’s attempt to reshape its battered image into a kindler, gentler budget carrier went into overdrive yesterday, when it thanked its customers in the Irish Independent and said it looked forward to welcoming them on board in 2014.

It adds, “We know we need to keep improving, and we hope you’ll enjoy our improved customer service in 2014.” See the full advertisement below.

Ryanair’s previous pre-boarding process saw passengers fight to be among the first to enter the aircraft and secure the best seats. “Overwhelmingly customers have said that what they didn’t like about the Ryanair experience was the queuing,” Ryanair director of customer services, Caroline Green, recently told Runway Girl Network. She also revealed that the carrier is eyeing partnerships with global distribution system (GDS) providers to attract business travelers, and is keen to bring inflight Wi-Fi to passengers.

The newfound “benevolence” of Ryanair – and a turnaround in approach from its usually insulting and controversial CEO Michael O’Leary – comes at a time when the carrier is quite publicly losing the war for European low-cost carrier (LCC) supremacy to rival EasyJet.

So will Ryanair’s good will towards men lead to increased traffic? It certainly can’t hurt. Like many fellow travelers, Kilkenny, Ireland-based business professional Mary Prior Butler started avoiding Ryanair like the plague following a miserable passenger experience (#PaxEx) with the carrier. Last year, she told the APEX editor’s blog: “Based on personal experience of traveling within the budget market, I think I would prefer to walk on burning coals rather than subject myself to the stress that is induced by trying to negotiate the budget travel experience!

“Our LAST experience involving Ryanair, resulted in my other half jumping on our carry on luggage at the boarding gate (in front of the entire line-even though it was well under the required weight) rather than be swindled out of an extra €30 because our bag did not meet the exact dimensions. It was a real Mr. Bean moment!”

After yesterday’s Irish Independent newspaper landed at her front door, I reached out to Ms. Butler and asked her if she would reconsider flying Ryanair.  Her response? “I might. I am adopting a definite wait and see attitude. Michael O’Leary has a long way to go to persuade me (and a lot of Irish people) that his airline has genuinely turned over a new leaf!!!” 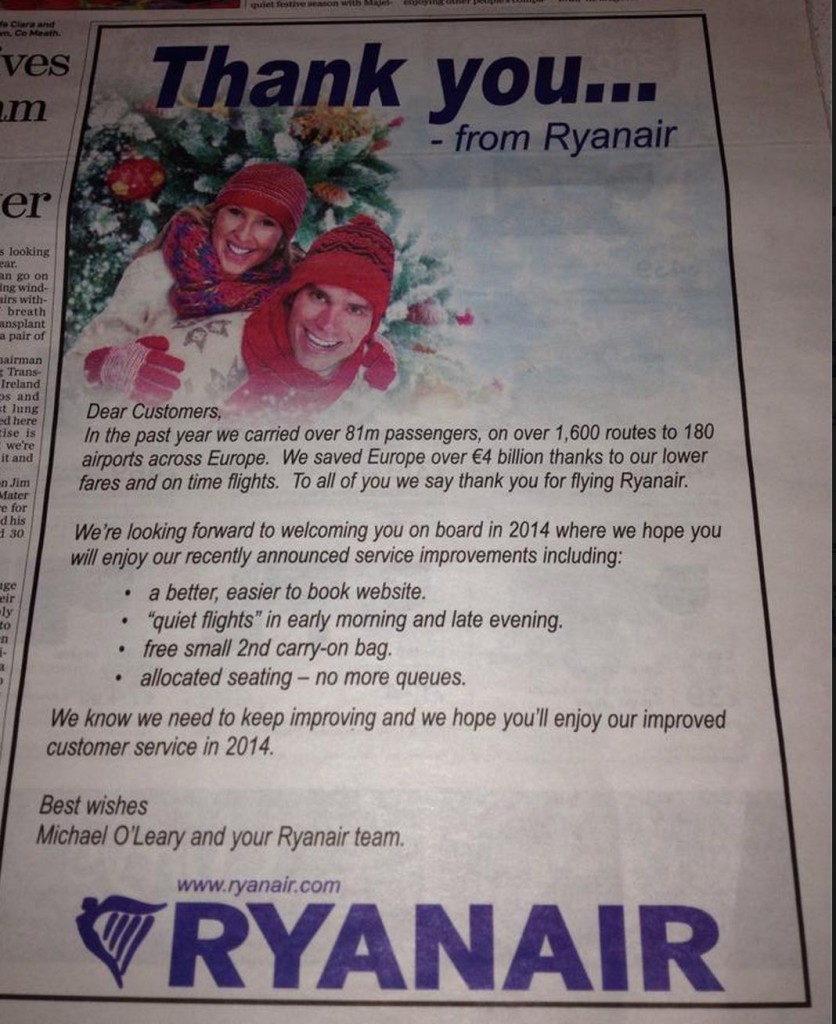