Loon, the Google business that sought to provide Internet access to rural and remote areas using high-altitude balloons, is no longer a going concern, after parent Alphabet shuttered the operation early last year. But some of the technologies originally developed for Loon’s wireless efforts — including advanced laser communications — are now seeing a second life and could improve satellite connectivity-powered Internet across land, sea, air and space, including onboard aircraft and ships.

It says it has already secured an initial $8 million contract with the Defense Innovation Unit (DIU) to help develop secure Internet connectivity throughout the space domain for both private and public sector customers. The DIU is a United States Department of Defense organization founded to help the US military make faster use of emerging commercial technologies.

“These technologies set the new standard for intelligently orchestrating, managing, and extending mesh networks across all domains — land, sea, air, and space — to create connectivity everywhere — no matter the protocol,” says Aalyria founder and CEO Chris Taylor in a press release shared with Runway Girl Network.

“The connectivity on your plane, train, car, cruise ship, space station, lunar base camp, or Mars rover — and anywhere else in the solar system — ought to be as good as it is in your home. We are able to orchestrate cross-constellation inter-satellite links that enable the internetworking of government and commercial constellation providers. We can orchestrate high-speed urban meshes and global unified network operations, and we can help connect the next three billion people. We can do this today — and at scale. Aalyria is the digital cartilage and autonomous brain that allows everything to internetwork.” 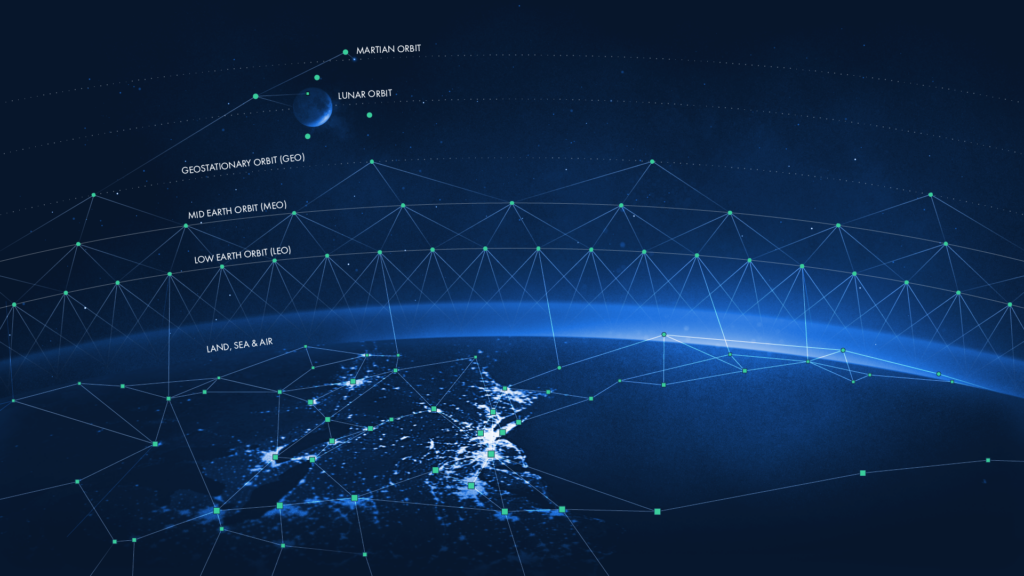 According to Bloomberg, Aalyria’s Spacetime is the software previously known as Minkowski, which was used inside Google to spread a high-speed connection from the ground across dozens of high-altitude balloons, whilst Tightbeam is the new name for Project Sonora, a never-before-disclosed free-space optical communication system that uses lasers to transmit data wirelessly via light through the atmosphere and space.

Spacetime operates networks across land, sea, air, and space, at any altitude or orbit type, supports all radio frequency bands and optical wavelengths, and is designed for interoperability with legacy, hybrid space, 5G NTN and FutureG network architectures. Spacetime is unique in that it is asset and domain agnostic, meaning it can orchestrate networks across nearly anything that is connectivity-equipped on Earth or in space – ships, planes, satellites, and space assets in near and deep space.

Boasting a lab in Livermore, California, Aalyria notes that Spacetime already has millions of flight hours orchestrating and managing airborne communications systems around the world. “As the number of networks adopting Spacetime continues to grow, it will provide those network operators with unprecedented flexibility to craft agreements with each other that share spectrum or network resources across space and time.”

Tightbeam, on the other hand, is “the world’s most advanced coherent light free space optics technology”, according to the firm.

At 100-1000x faster than anything else available today and covering greater distances than previously imagined, Tightbeam’s coherent light laser moves data intact through the atmosphere and weather, and offers connectivity where no supporting infrastructure exists.

Aalyria is certainly not the first company to tout lasers for inter-satellite links, and to bolster connectivity in the mobility vertical. Munich-headquartered Mynaric, for example, boasts a product range of laser comms solutions aimed at supporting space-to-space, space-to-air, and space-to-ground connectivity for LEO and MEO satellites, and is eyeing future ground-to-aircraft and mesh network applications for inflight connectivity.

“Our laser communications solutions can provide order of magnitude higher bandwidth than any radio frequency technologies. This unlocks sheer endless possibilities for inflight entertainment, real-time aircraft and turbine monitoring and a range of other crew or passenger services no one is even thinking of today,” Mynaric CEO Bulent Altan told RGN in a recent in-depth interview. Rather than replace all existing radio frequency equipment, he said, Myanic’s goal is to complement aircraft communication capabilities with very high bandwidth and secure backhaul links to other aircraft, the ground or to space.

For its part, Aalyria believes its Spacetime and Tightbeam technologies will together enable complex networks “at a scale and speed that has never before been possible”. And former Deputy Secretary of Defense Bob Work insists in a statement: “There is nothing else like it.”

Time will tell, but Aalyria, which is backed by Silicon Valley investors including the founders of Accel, J2 Ventures, and Housatonic, notes that its technology presently supports communications networks with up to 15 million possible links and wireless connection speeds up to 1.6 Tbps.

“Aalyria offers a cutting-edge Software Defined Network capability and optical network technology that is designed to deal with dynamic links, like space to ground, air-to-air, air-to-space and every combination between,” says company advisor and former Google VP of Wireless Services, Milo Medin.

“The future of communications marries ground-based fiber with space, wireless, and optical links to enable the creation of a survivable on-demand network infrastructure, anytime and anywhere, at speeds that remove the network as a bottleneck. This is critical not just for the future of the Joint Force, but for extending the capabilities of the cloud to anywhere on the planet and beyond where the modern enterprise is delivering value.”

Aalyria’s C-suite and advisory boards include a ‘who’s who’ of tech execs and entrepreneurs. Handily, Aalyria has provided links to many of their LinkedIn bios and Wikipedia listings.

Chris Taylor, CEO – Chris is a four-time CEO and successful entrepreneur who most recently was the CEO of Govini. Chris also spent 14 years in the U.S. Marine Corps as an enlisted infantryman and Force Recon Marine. He is a proud native of South Buffalo, NY.

Nathan Wolfe, EVP and CTO – Prior to becoming an Aalyria founder in 2022, Nathan spent the previous six years at Google as a technical director and product area manager, focused on innovative hardware efforts, including what would become Tightbeam, key to “connecting the next three billion people.” Nathan started his professional career in the U.S. Air Force where he was an air traffic controller.

Dan Gaudreau, CFO – For 30 years, Dan has been a finance leader in software and hardware startups and global enterprises that were publicly and privately held. He’s led IPOs and ensured balanced controls in companies to make them as nimble as they can be while remaining fiscally responsible, too.

The Aalyria Board of Advisors

Dr. Vint Cerf – is known as one of the fathers of the Internet. He is currently a vice president at Google Cloud, and working with NASA to establish the Interplanetary Internet.

Hon. Robert O. Work – is the former deputy secretary of Defense and former vice-chairman of the congressionally-established National Security Commission on Artificial Intelligence.

Milo Medin – is the distinguished engineer at Schmidt Futures, former VP of wireless services at Google, and a former member of the Defense Innovation Board.

Michael Cheng – is a former network engineer, M&A lawyer, and led open source product management at Meta (formerly Facebook). He also serves on the Linux Foundation’s board of directors.

Eric Gillespie – is a serial entrepreneur and founder of Govini.

Josh Marcuse – is the head of business development at Google Public Sector and former executive director of the Defense Innovation Board.

Sharath Ananth – is a systems engineer at Google.

Kent Eisenhuth – is a product design lead at Google. He is also a fellow of the Royal Society of Arts and author of Drawing Product Ideas.

Dr. Donald A. Cox III – is a global technologist and optical communications expert.

All images courtesy of Aalyria, credited to: Scott Coriell/peakpublicaffairs.com