The inkjet livery printing system delivered a striking image of an Orca leaping from the water, printed using thousands of microdots on the aircraft tail, resulting in a remarkably clear image that shows every drop of water flying off the whale’s fin and the visually appealing translucence of that water. 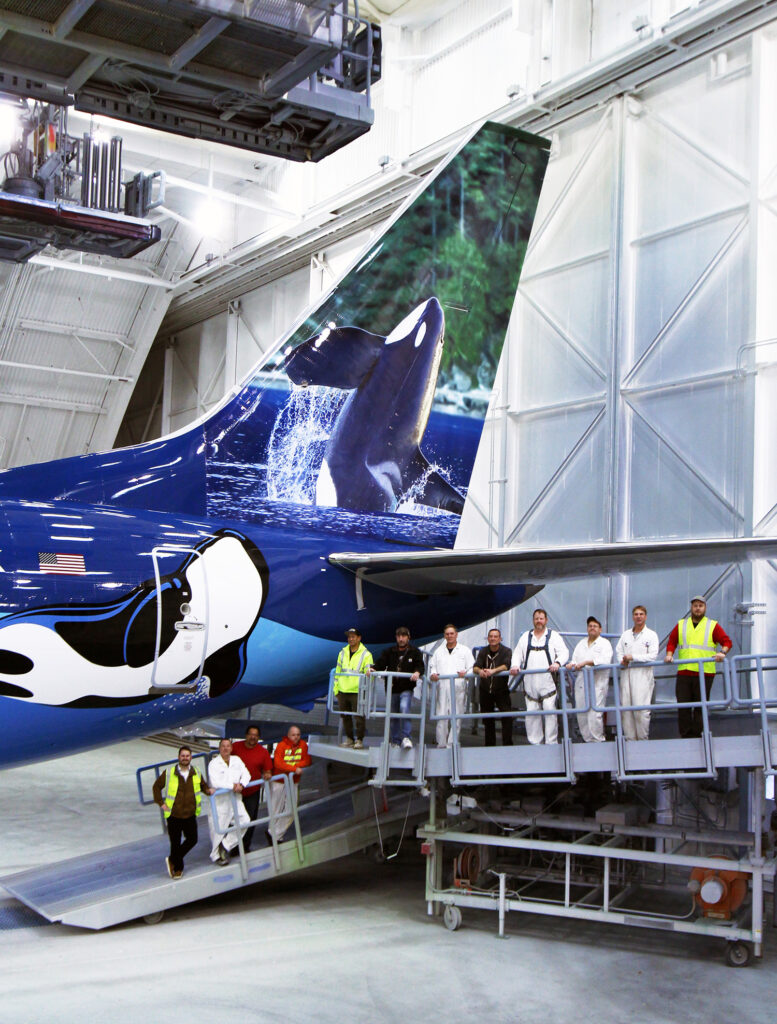 Runway Girl Network spoke with TEAGUE livery and communications design manager Katie Ryan to discuss the design process for the unique Alaska Airlines livery and the core ingredients to successful livery designs, both for consistent core branding and special events and celebrations.

Of the Alaska Airlines livery, Ryan said: “We had been working on this project for quite some time. It started almost a couple of years ago, and then we had to go on pause. Jim [Farmer], the designer of the livery scheme, did some hand-illustrated work, like a whole underwater scene. And we explored so many different avenues, but ultimately I think we are really happy with where it ended up.

“We explored different ways of showing the ocean sprays coming off the orca’s tail on this current livery. We had different takes, trying to express motion. I think what’s working really well on this livery is you get that sense of water, but it also connects with the Alaska brand and with the Aurora stripes.” 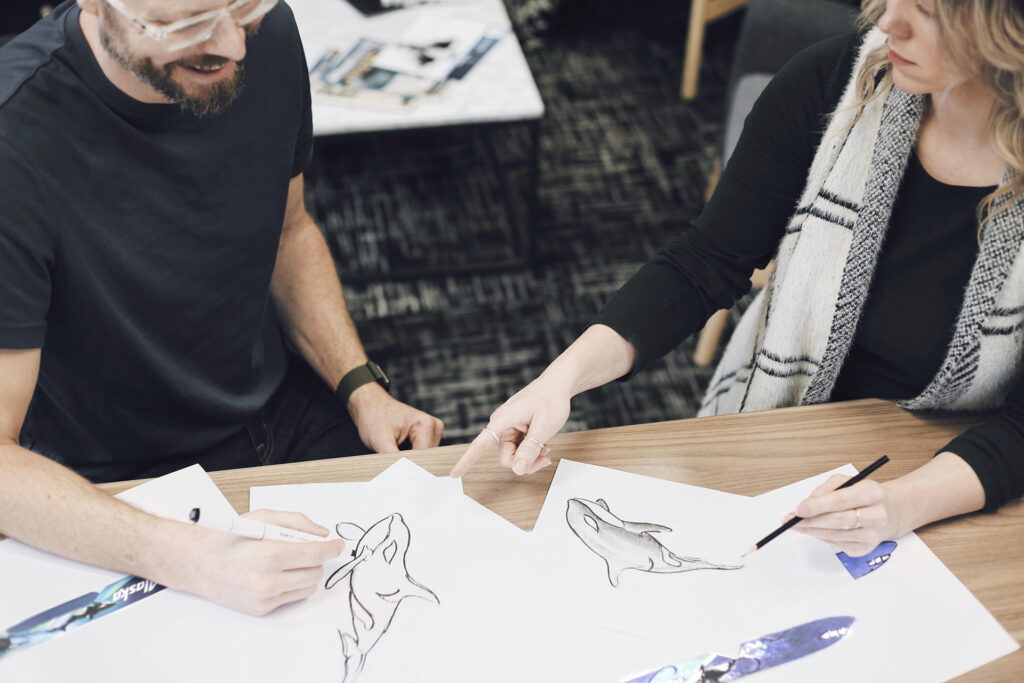 A unique detail of this livery was the image selected to be inkjet printed on the tail. It is a photograph taken in the Puget Sound region of Washington by photographer and former Boeing employee Jane Cogan as part of her work to promote concern for endangered whales in the area. Cogan captured the image while working on a Center for Whale Research project.

This livery was also unique because the photograph detail on the tail was printed using Boeing’s inkjet process, which is a recent development for the Seattle-based aircraft manufacturer. Boeing’s competitor, Airbus, developed a similar system in 2014, but neither system is used in full-scale production.

“It works similar to a decal, in terms of what information we provide to Boeing [to produce the image]. So it’s more about the technology doing the work, I think,” said Ryan. According to Boeing, the process promises to reduce production time from 12 days to only a couple of days. It can be more fuel-efficient as the heavier layers of paint are replaced by a single layer of thin dots. Still, Boeing is not yet making this technology available to customers as a standard option. 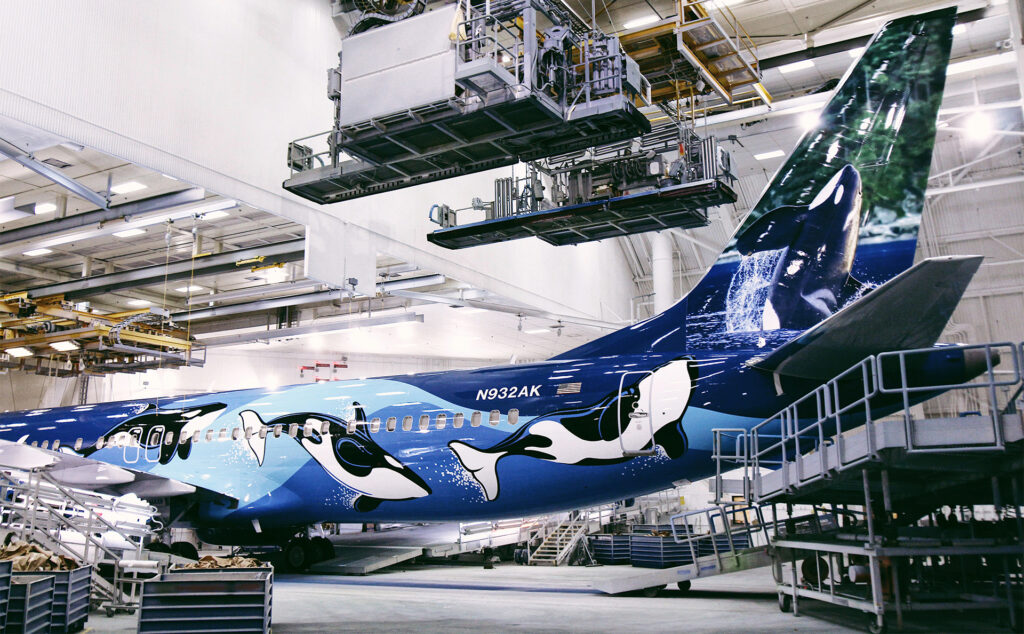 Ryan could not comment on the viability of inkjet printing going into full-scale production for now, as it is still a developing technology. Still, she said: “I think just doing this test and experiment was a step in the right direction to knowing that it’s available. Maybe in a decade out, it may be something that they’re going to use more often.”

“I’ve been doing this for 15 years now — airline livery designs — and I think the fact that we’re here we’re talking about this technology, I am excited about it. It’s the future of painting your aircraft,” Ryan added. “We [designers] are all about that. We want to know what we’re able to achieve. We want to do creative designs which is more color and more detail. If we can achieve that with inkjet, I think that that’s very exciting.”

A challenge for the design firm was ensuring a seamless result when combining painted and inkjet elements. “There are areas we need to consider, like the bottom of the tail, and the dorsal fin, which is painted versus the inkjet technology [on the fin]. One challenge for us was to make sure that its seamless — where the rest of the airplane is painted,” Ryan explained.

“There are always challenges with designing [and] doing great livery design,” she continued. “For example, making sure that, from every angle that you’re viewing it, whether you’re down on the ground or at eye level with the airplane, you’re getting a good perspective, and it’s not distorted or warped. We work to make sure from every angle you’re going to get a good view of the aircraft. We need to make sure that it’s meeting the airline’s expectations and then also giving our recommendation for what we think is going to look best.” 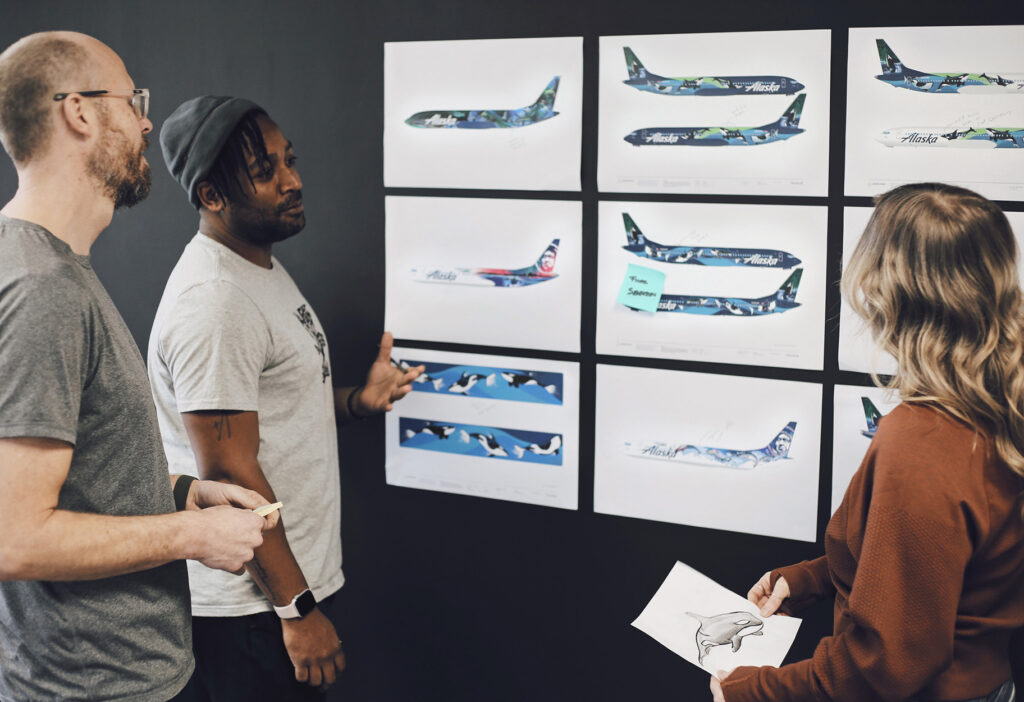 The TEAGUE team reviews alternative mock-ups of images which could be used for the Alaska Airlines livery, to be presented to the airline for final selection. Image: TEAGUE

RGN asked Ryan what she believes sparks the passion for liveries among the public, both positive and sometimes negative.

“I think it’s that people have a connection to a certain experience or the way a certain brand should be. If airlines are [revealing a new livery], they are creating a connection with their customers or potential customers,” she responded.

“I think a sense of playfulness in the designs is something that attracts the viewer or the potential customer. I think that’s what the special livery does — it’s exciting their current clientele and trying to attract other potential fliers to fly with them. I think the ones that we’ve seen that are super successful are the ones like the Disney airplanes, the ones that are just bold in color and graphics and have a lot of elements going on. But they are also tied together well…celebrating with great artwork that’s cohesive, so it goes with the airline’s brand too. We’ve found the successful ones to be liveries that are both exciting and cohesive.”

Ryan concluded: “I’m just excited for the team’s potential to continue to keep doing these special liveries, to push the boundaries with what we’re able to do. In terms of how things are painted, like the inkjet technology, to showcase our creative designs on more of these beautiful airplanes, and continue to create holistic branded experiences for the future.” 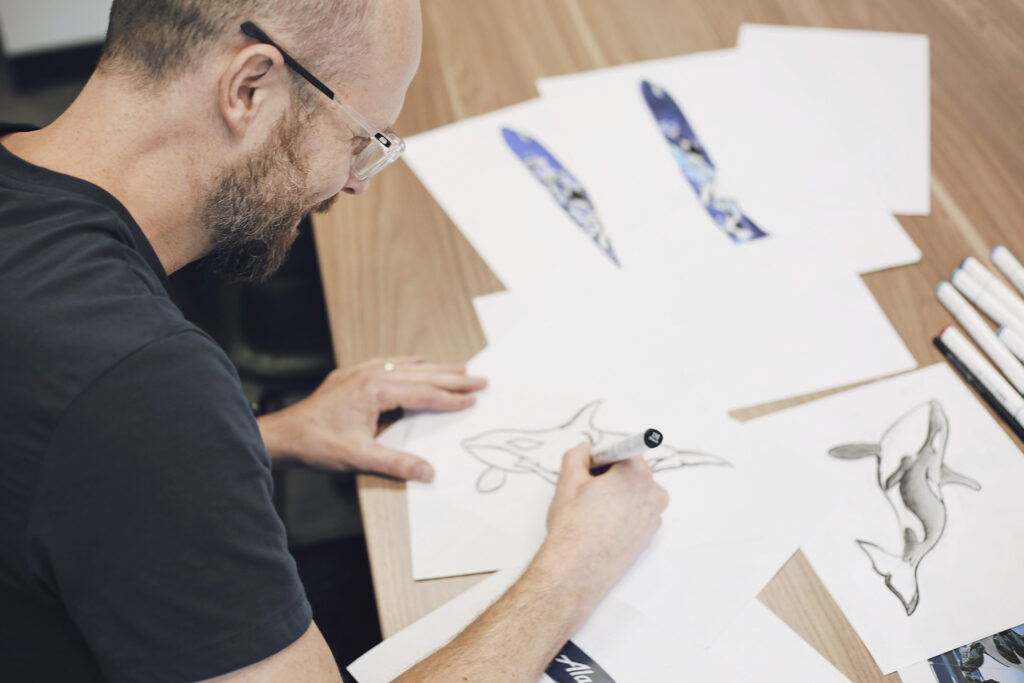 All images credited to TEAGUE

What aviation can learn from cruise lines