Aerobility, a UK charity whose aim is to “offer disabled people, without exception, the opportunity to fly an aeroplane” on 29 May held its second annual Armchair Airshow and auction. Media representatives, including your author, were invited to London Biggin Hill Airport to view the semi-virtual airshow and attend the auction, which helps to fund hundreds of life-changing fights for those living with a disability.

A studio had been created inside a pristine Biggin hangar, with sofas arranged for the presenters, and a comprehensive sound and camera set-up. Everything was positioned before an impressive backdrop of airplanes, among them Aerobility’s specially adapted Technam P2002 JF, which features some clever modifications for disabled fliers including strengthened wings allowing weight bearance (making access easier) and extra hand holds.

Attendees witnessed almost three hours of streamed content, comprising mostly exclusive pre-recorded video, but with contributions ‘from the studio’ and a brief live flying program including a Dakota flypast and a spirited Spitfire display, as well as remarkable aerobatic performances from a Grob G 109 and Rich Goodwin’s ‘Jet Pitts’. 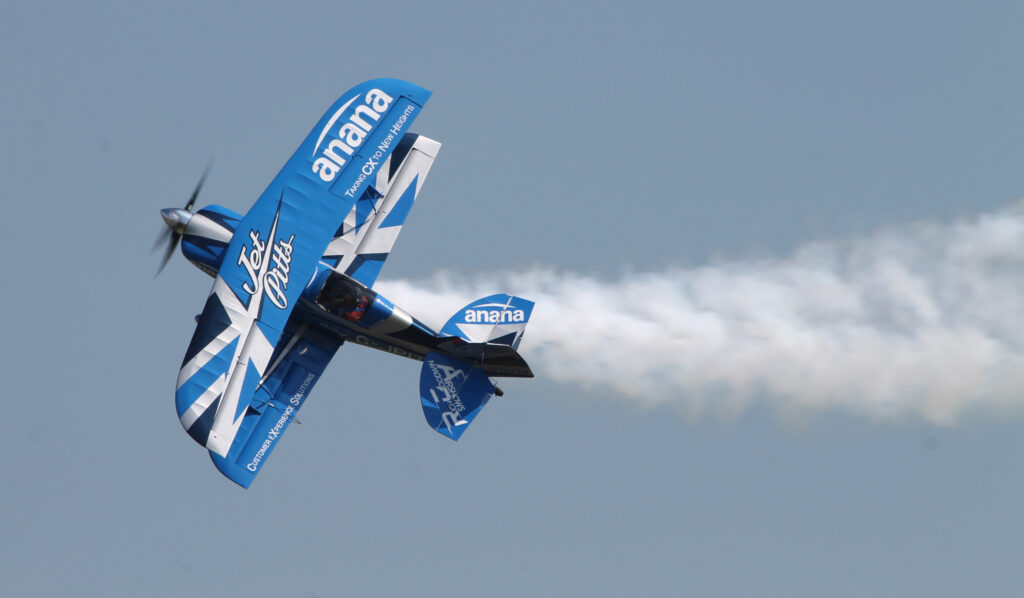 For a committed AvGeek like myself, it was good to be up close with airplanes again, and to be inspired. As part of the Armchair Airshow event, blind wheelchair user and regular flyer Sophie returned to the air for the first time since entering strict shielding conditions at the outbreak of the COVID-19 pandemic (pictured at top).

Speaking with energy and enthusiasm, CEO Mike Miller-Smith highlighted how flying changes the lives of disabled people. But it was aviation activities officer Harvey Matthewson who stole the show.

Matthewson has cerebral palsy yet achieved his PPL in December 2019 and is described by double-amputee charity trustee and fellow PPL, Neil Tucker, as “an excellent, smooth pilot”. The condition’s affects are obvious in his movement and speech, but when he’s flying, Matthewson is just another voice in the air. 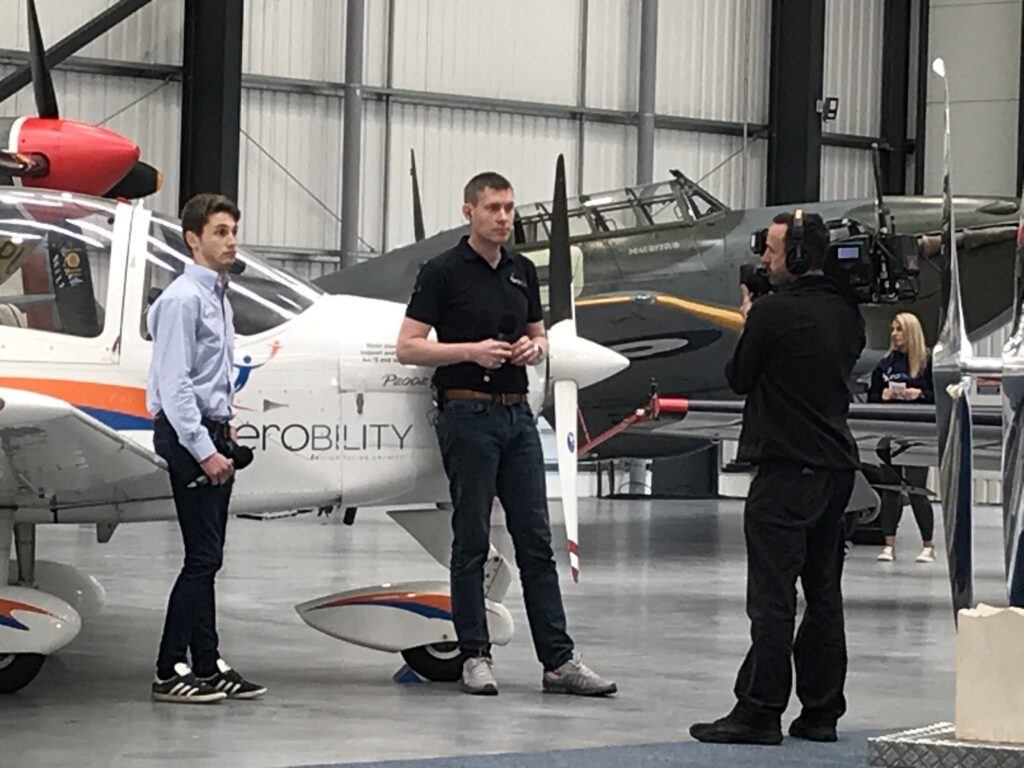 Matthewson, at left, prepares to speak live to camera, alongside the charity’s own Technam aircraft during the Armchair Airshow. The impressive ‘studio’ backdrop included a Hawker Hurricane (background) and Spitfire, the red propeller spinner of which is to the left. Image: Paul Eden

Meeting Matthewson for the first time, I needed to listen carefully to catch every word, but in part only because every word he said was worth catching. He spoke with passionate eloquence about his work and flying.

“I primarily look after our two programmes for young people: the Aviation Education Program and Junior Aspiring Pilots’ Program,” explained Matthewson. “I came to Aerobility in 2016 with nothing more than a phobia of flying and the dream of becoming a pilot, two things that really didn’t go together.

“Over the next few years,” continued Matthewson, “I grew as a person and got my private pilot’s license, but Aerobility for me is not particularly about flying. It’s a family. And the value of what we do comes from the improvements we see on the ground. Flying can be described as a clean slate. When you go flying, your mind clears of your problems on the ground and when you come back, you’re allowed to restart your life with, I guess, a bit more clarity of thought.”

Matthewson believes that, had he found the charity sooner, his life would have been quite different. Now, he considers it a privilege to extend flying opportunities to other young disabled people, through Aerobility’s fleet of three Piper PA-28-161 Warrior II lightplanes and the two-seat Technam. 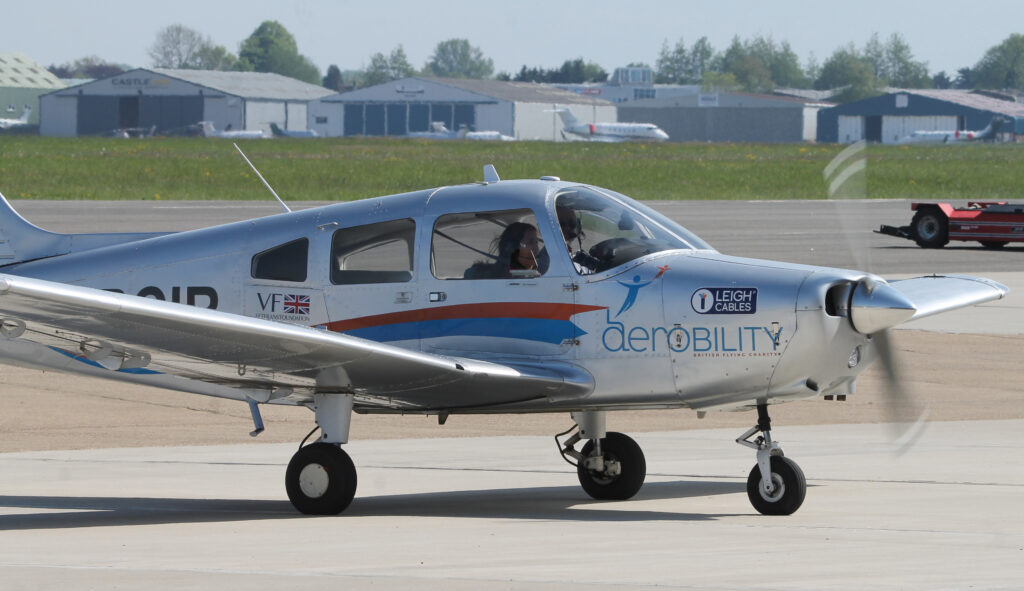 One of Aerobility’s Warriors taxies back at the end of Sophie’s return to flight. Image: Paul Eden

Aerobility also has a team working on a Zenair CH 750 kitplane under its Building the Dream project. It will be the UK’s first aircraft built and flown by disabled people. And more aircraft are in the pipeline. Through Project Able, Aerobility has bought more than 60 ex-military Grob G 109 motor gliders. They are being refurbished with the aim of adapting as many as eight for disabled flyers and selling the remainder, raising funds to cover the purchase and refurbishment costs. 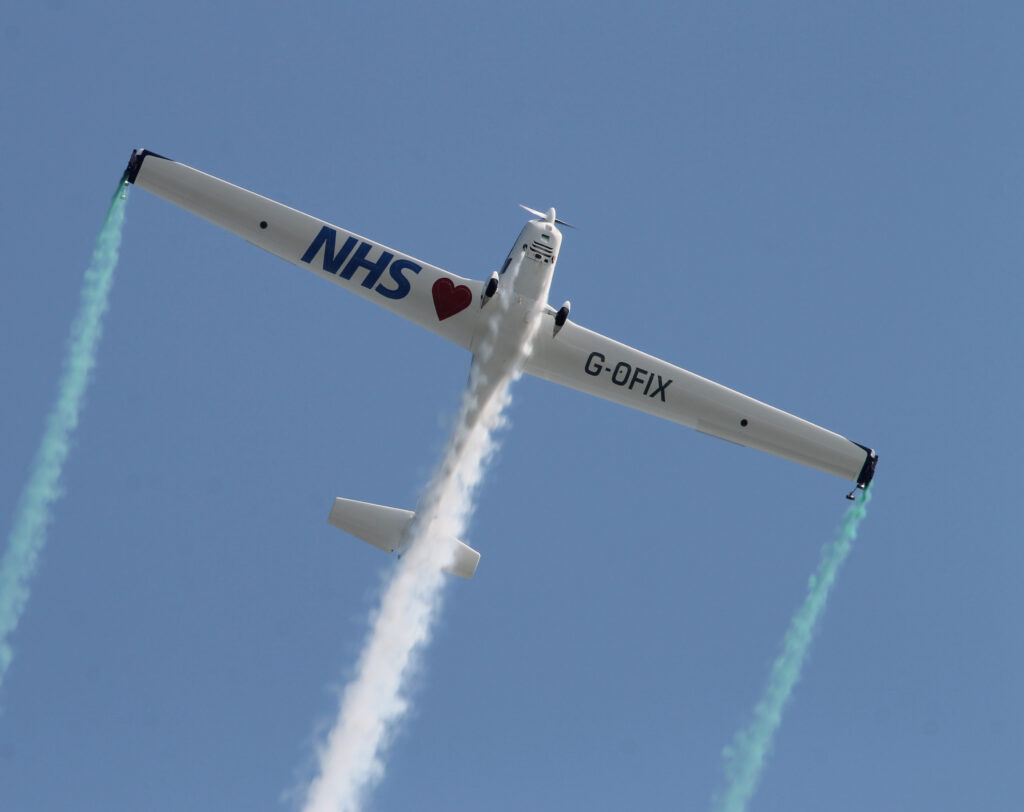 Less energetic than the Pitts but no less impressive, the Grob 109 carried titles celebrating the UK’s frontline National Health Service workers. Under Project Able, Aerobility expects to take as many as nine G 109s on strength. Image: Paul Eden

Project Able is a prime example of Aerobility’s can-do, will-do attitude. At its 2021 Armchair Airshow, Mike Miller-Smith and his incredible team revealed another side of flying. He said many disabled people are effectively always in lockdown, but after they’ve flown, they wonder: ‘if I can fly, what else can I do?’