Boeing is pursuing third party entities to manufacture and distribute a new mobile UV wand that disinfects flight decks, galleys, lavatories and other aircraft interior surfaces, as part of its wider effort to restore confidence in air travel amid the COVID-19 crisis.

During a media briefing today, Boeing associate technical fellow Kevin Callahan said the airframer intends to partner with a third-party licensee in the coming weeks and hopes to make the product available for airlines in the fourth quarter of this year.

“We engaged with several airlines in order to understand their specific needs with regards to difficult-to-reach and sensitive areas, such as flight decks, as well as lavs, galleys and seats. The idea here was to have a mobile device that an aircraft operator could bring on board to rapidly disinfect the surface with ultraviolet light,” explained Callahan.

The mobile UV wand, offered in a protective case, is intended to be an industrial product, providing many years of service. A price has not yet been set – those details will be thrashed out with the manufacturing partner – but Boeing expects it to be quite competitive. In June, Honeywell announced it would offer ultraviolet cabin cleaning to airlines through a partnership with Dimer LLC, maker of a portable UV system known as the GermFalcon.

Boeing isn’t new to the concept of using UV light for disinfection. In 2016, it showcased a self-cleaning lavatory concept that uses far-UV light – in the shorter wavelength part of the ultraviolet spectrum – to kill 99.99% of microbes in a three-second burst. In 2019, it installed the self-cleaning lav on a 777 ecoDemonstrator, as part of its flight test research program.

“We took the technology we had developed, such as the self-cleaning lav, and brought that into a product,” said Callahan, adding that a “deep integration” with airline customers, such as Etihad and ANA – “with whom we understood their operation very carefully” – helped to inform the mobile UV wand.

For instance, Boeing knew that 15 minutes was the length of time required for one person to clean the flight deck’s electronic equipment and other sensitive devices “and we needed something powerful enough to disinfect all those different surfaces in that timeframe”. So, the idea there was to find an option that wouldn’t require liquids. 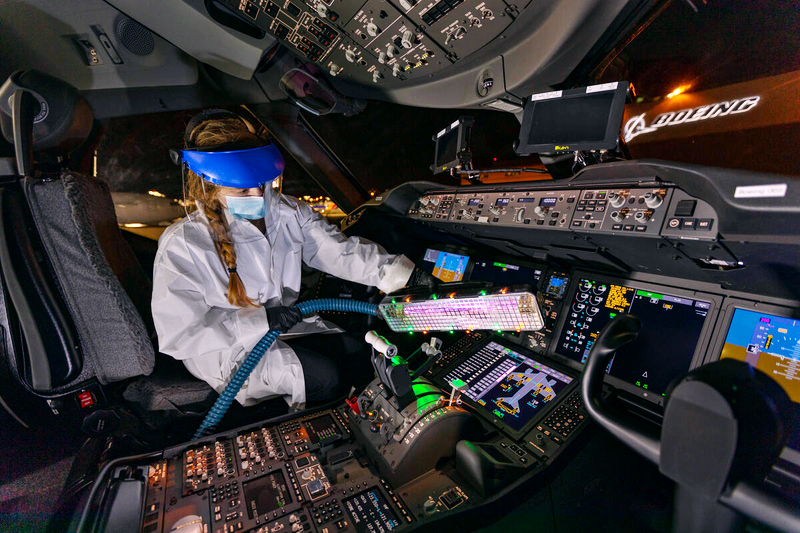 Boeing envisages that operators will use more than one wand – perhaps multiple wands in the cabin, if needed, said Callahan. “Whatever is required for the airline operation.”

In the early days of the coronavirus pandemic, Boeing ensured that chemicals on the EPA list of COVID-19 disinfectants were safe for aircraft equipment and surfaces. But in the longer term, it wants to move away from using chemicals to disinfect sensitive areas.

UV light is among the tools available, but Boeing is also looking at thermal disinfection, the ionization of air, and coatings that will last on surfaces.

Boeing’s latest ecoDemonstrator, a 787 destined for Etihad, will include testing of the new mobile UV wand. The airframer is both “familiar and confident” in the technology, which can kill 99.9% of viruses of interest, said Callahan. That’s why it believes the technology is ready for prime time.