In a sobering new report, Moody’s predicts that the broad base of global suppliers feeding aircraft manufacturers will be “the last of the direct aviation industry stakeholders” to regain their footing when air travel rebounds after the COVID-19 crisis.

As passenger traffic eventually improves, airports will recover along with airlines, followed by aircraft lessors and then aircraft manufacturers, according to the credit rating agency. Aviation suppliers feeding the airframers will not recover before 2023, it suggests.

That’s a gut-wrenching forecast for the aviation supply chain, which includes airline passenger experience stakeholders that deliver hardware directly to airframers for factory-fit installations. But it’s also not terribly surprising, given that aircraft deliveries have fallen dramatically amid the crisis, and numerous orders have been cancelled.

Overall, the coronavirus pandemic has had a disproportionate impact on the global airline industry, as it is “one of a few industries that saw more than 90% of demand fall away within weeks of the global spread in March”, notes Moody’s.

“The strain on the industry’s previously flourishing fundamentals is (and will continue to be) felt across a broad swath of the global economy, well into 2022 and beyond.”

Moody’s analysis concerning the timeline for industry recovery is roughly in sync with data emerging from a poll of more than 500 aviation professionals between April and June.

Conducted by satellite operator Inmarsat and the Airline Passenger Experience Association (APEX) as part of their FlightPlan online broadcast event, the poll shows that more than half of respondents (60%) expect a recovery period between 18 months to three years.

Notably, however, almost half of respondents (45%) believe that in terms of passenger experience specifically, the crisis will only cause a short-term reduction in investment, and almost a third (32%) believe there will be an overall increase in investment.

“There was agreement that the adoption of digital and connected technologies will drive recovery, with data analytics, biometrics, artificial intelligence (AI) and the internet of things (IoT) set to have the greatest influence on future profitable growth,” say Inmarsat and APEX in a statement.

Since COVID-19 was named a pandemic, Runway Girl Network has interviewed a plethora of aviation executives about what the future holds for aviation and PaxEx, and covered a variety of industry webinars tackling the same question. Most stakeholders agree that the crisis will accelerate digital transformation of the industry.

The “stickiness’”of digital solutions will be driven, at least in part, by general consumer trends and changing behaviors in retail settings, executives suggested during a recent RedCabin event.

But connected technologies such as data analytics and IoT represent very specific types of investment for airlines. The appetite for cash-strapped carriers to acquire new hard product such as seats, IFE or indeed coronavirus-inspired seat separation solutions – and retrofit them to aircraft – remains to be seen.

Meanwhile, Moody’s is extremely cautious about laying down a hard and fast forecast, especially given the uncertainty around recovery in the United States.

Its analysts’ models anticipate a recovery in passenger demand close to 2019 levels by the end of 2023, once the concerns related to personal health and safety are relieved. That represents the upper end of the timeframe predicted by Inmarsat/APEX’s poll respondents.

However, Moody’s cautions that recovery could be impacted by the recent increase in infection rates in the US, and how governments respond.

“To the extent that an environment characterized by fits and starts of health safety confidence levels and ensuing passenger demand persists beyond 2021, the risk of more extensive industry disruption and a more protracted recovery period would escalate further,” warns Russell Solomon, Moody’s associate managing director. 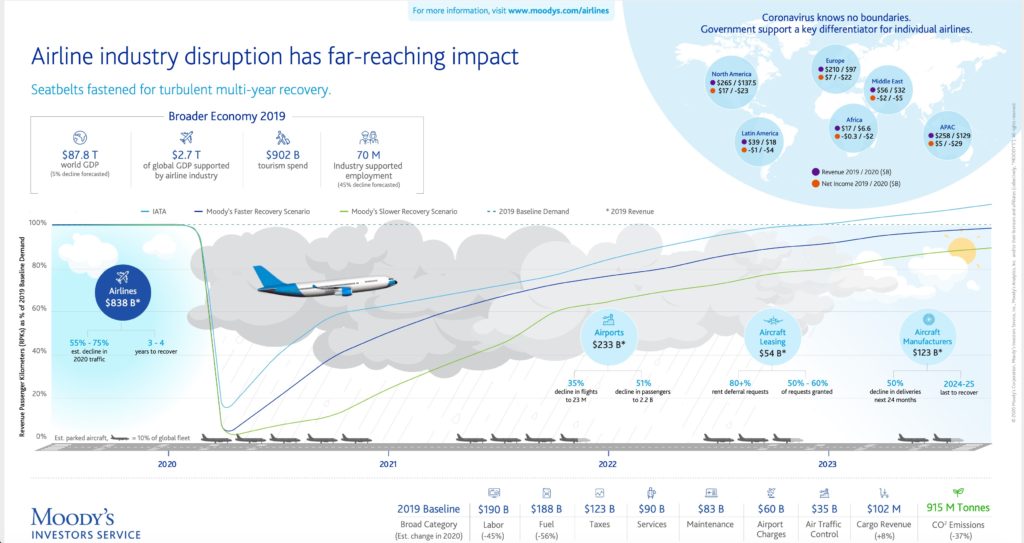 Passenger demand for air travel drives demand for key stakeholders in aviation – airports, aircraft leasing companies and manufacturers, as well as a multitude of service providers. Each of these stakeholders will be significantly affected for at least the next three years, according to Moody’s analysis. Anticipated declines in their respective activity levels of 40% to 50% or more in 2020 will closely mirror those of the airlines. Image: Moody’s