“We’re looking at it as a new platform,” vice president of marketing David Pook tells Runway Girl Network, calling RISE “a building block kind of approach. Instead of it being an IFE system, it is indeed a platform that has these different building blocks and components.”

Where the building blocks might be DC in-seat power, wireless inflight entertainment, cabin crew functionality, overhead screens, and seatback video, the base level is the head-end server, the crew device and the power distribution system.

That power distribution system is key. It’s part of the former digEcor intellectual property, and differs from others in that it distributes DC rather than AC. Among other benefits, at-seat USB power supply does not need to be converted, leading to smaller, simpler, cheaper and lighter at-seat USB power boxes.

The crux, Pook says, is “making sure that the wireless, the power and everything fits into this story. It turns out there’s not a whole lot of extra work to do that, but we were lacking the big picture.”

That big picture includes the positioning of Burrana as an evolution of two well-known brands. But why now, at the height of the COVID-19 crisis?

“Airlines are still — obviously not to the same rate — asking us about these things, and there are still opportunities they are pursuing,” Pook says.

There is, of course, uncertainty, especially around the question of whether seatback screens become a coronavirus pariah, with passengers preferring not to touch them.

But, Pook notes, “out of the four main pillars of [RISE], only one of them is seatback screens. We feel very strongly that, even without seatback screens, we have a pretty strong market. We have a pretty good market share already in power, and a very good market share in overhead. We feel like wireless is a nice natural complement to both of those. Those three alone really get us a long way down what we want to do.”

He suggests that, over the next couple of years, the focus will be primarily on power, overhead and wireless installs, with a substantial market for overhead within China in particular. Of seatback, Pook estimates, “I don’t see it being a predominant part of our portfolio any time in the next four to five years.” 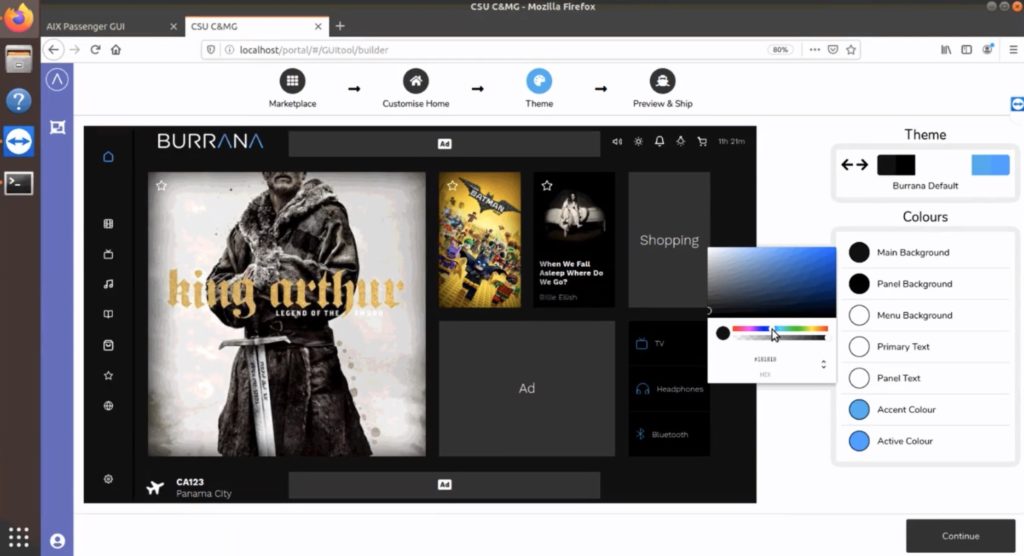 The IFE elements of RISE, like other systems, allow for quick and easy GUI updates. Image: Burrana

But what are airlines asking for in the COVID era, and how have the conversations changed?

“First of all, the conversations have been fewer and far between, just because a lot of them are not working, and are just completely overwhelmed by staying afloat,” Pook says.

“The ones we have, have been focussed on timing, for the most part. There have been a few airlines who have said: ‘we were thinking about this project but it’s off the table now, because we’re going to require those aircraft’, for example. It was a retrofit, but now those are the really old aircraft. Let’s say the examples of A380s, where they were in a short-term plan but now they’re just off the table.”

While much of Burrana’s marketing collateral for RISE involves screens, they’re likely to be a small part of the puzzle, says David Pook. Image: Burrana

Others, by contrast, are looking to keep older aircraft longer, so are hoping to extend the life of those aircraft with a cost-effective yet modern system.

“We have no-one who has come to us and said ‘well, we were thinking about wireless but now we want to do in-seat’, or vice versa. I can’t recall anything that shifted to that extent,” Pook muses. “It’s been more about timing: we’re going to defer this decision for six months, we’re going to focus on the new linefit, we’re going to focus on retrofit, those types of discussion. And of course cost, cost, cost, is always part of the discussion: what can you do quickly and efficiently in the timeframe?”

And Burrana believes that RISE is a good answer for that question right now.