Before the World Health Organization named COVID-19 a pandemic, I was invited to attend an exclusive preview of Air Canada’s newest premium space, the Signature Suite, at Vancouver International Airport. Not knowing what was to come, it seemed like a good opportunity to pair work with play by bringing my daughter and mother on the journey over Canada’s annual Spring Break. Locking down travel for the three of us may have given me a small glimpse into how Air Canada dynamically adjusted capacity as coronavirus started to take a toll on bookings. It also reminded me that, as a mother of a severely allergic daughter, I’m already well-equipped to fly in a post-pandemic world.

The carrier provided a complimentary flight for me to attend its event. But I booked flights for the rest of my party via a separate reservation. I also paid the seat selection charges to ensure we were all seated together in a seat triple. We were scheduled to fly on a Boeing 787 from Toronto to Vancouver, and this aircraft type remained assigned to the outbound flight. But while the return flight was also listed as a 787, Air Canada started to swap equipment within a day of booking. The carrier first slotted in an Airbus A321, then reverted back to the 787, and then changed a third time, back to the A321.

But because our reservations were not tied together, each change had the undesired consequence of separating me from my mother and daughter. When I received the first notification of a swap from the 787 to an A321, Air Canada refunded the seat selection costs, and moved us back together free of charge. When I received the second change notification from the A321 to the 787 – and was separated from my family again –  I was able to move us back together using Air Canada’s web site, but I feared that if it happened again, after check-in, I would not be so lucky. There are several reasons why I wanted to be seated next to my family, but chief among them was to ensure I could limit my daughter Lyrik’s exposure to food allergens that might be on the plane.

A phone call to Air Canada came with a warning of a 1.5 hour wait before speaking to an agent. I took to Facebook Messenger instead where I received a reply within 12 hours directing me to Air Canada’s medical desk. I provided the team with our two reservation numbers and an explanation as to why we needed to remain together, and to alert them of Lyrik’s allergies. Air Canada responded by tying the two reservations together and sending me a list of its allergy protocol. The carrier’s remedy was put to the test when it changed the aircraft type for a third and final time back to the A321. This time our seats remained adjacent to each other.

The day of travel came. A gate agent called my daughter’s name and my family was allowed to board the 787 first to be able to wipe down the area as an extra precaution.

This is my life wherever I go with my daughter, whether to restaurants and movie theaters or when flying. I wipe down everything with Lysol Disinfecting Wipes to remove the peanut allergen that could, in a worst case scenario, kill my daughter if she were to come in contact with it. I also carry EpiPens everywhere.

On board the 787, I wiped down everything that had a hard surface – the window and window shade, the inflight entertainment screen and the thermoplastic seatback, the tray table and seat armrests. I even took a swipe over the seat fabric, though I know that wipes are not effective on fabric. This is the type of cleaning regimen now being recommended by experts to combat the spread of COVID-19.

Indeed, the US Environmental Protection Agency (EPA) has established a list of disinfectants that meet their criteria for use against SARS-CoV-2, the cause of COVID-19, and that list includes my go-to, Lysol Disinfesting Wipes, though the EPA stresses that its list does not equate to an endorsement. It turns out I’ve been preparing for a post-pandemic world all along.

After we finished wiping down our seats, the airline began boarding the rest of the passengers, but I noticed that the 787 was nearly empty. To her credit, an Air Canada crew member informed the one person seated behind us, and the one person in the seat triple in front of us that they could not consume nuts while seated there. However, they were welcome to sit anywhere else, given the vast number of open seats on the Toronto-Vancouver flight.

We ended up spreading out for some much desired extra room. Little did we all know at the time, but we were socially distancing in a way that also helps to stop the spread of COVID-19. Since then, Canadian operator WestJet has announced it is temporarily selling fewer seats to ensure passengers have more space amid the pandemic. Until 4 May, the middle seat on WestJet’s 737s and 787s, and every other seat on its Bombardier Q400 turboprops are unavailable to book. American Airlines says it is also trying to keep passengers spaced apart, when possible. 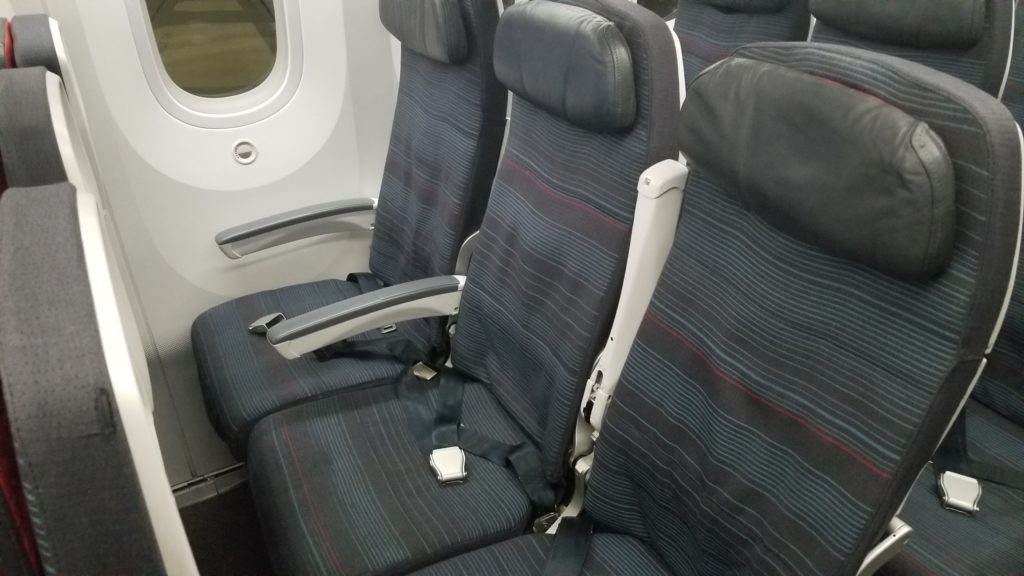 Shuffling around throughout the seat triple gave me a good sense of the space provided by the aisle, middle and window seats on the 787. In general, window seats are often favored by larger passengers, but I wouldn’t recommend them on the 787. As previously reported by RGN, the bulge of the wall between windows doesn’t always align well with the seat rows and, every few rows, the projection of the wall robs the window seat passengers of a couple of inches of already tight shoulder space. The seat belt was tight (don’t wear bulky clothes), but it fit my frame.

The aircraft was equipped with Panasonic Avionics’ eX3 IFE system, and this was the most amazing thing my daughter had ever seen despite the fact that I had packed a variety of personal electronic devices to entertain her.

She did not move her eyes from the screen for the duration of the flight. She played Hidden Object games, watched her favorite Disney show Bunked, enjoyed an episode of Drunk History (don’t judge) and even fiddled around with the inflight map. The content was plentiful, as Air Canada prides itself on its IFE.

The inflight WiFi, powered by Gogo 2Ku, worked like a charm. I purchased the one-hour browsing package for CAD$8.50 but multiple options were available.

The cabin crew served complimentary drinks twice and continually offered refills of water throughout the flight. Air Canada’s buy-on-board menu offered limited food options for my daughter – which is really no different than anywhere else – but she enjoyed being able to purchase an allergen-friendly MadeGood product and a guacamole/Tostito snack. The price of the MadeGood bar was equivalent to what you would pay in a grocery store, which was a pleasant surprise. Later on, we wanted to purchase another guacamole, but they were sold out. Perhaps Air Canada went light on the catering given the final light passenger load.

All in all, we had an enjoyable flight. The ability to travel safely on Air Canada with my allergic daughter was a relief for this mom. And I personally feel well prepared to fly again with my family in a post-pandemic world. 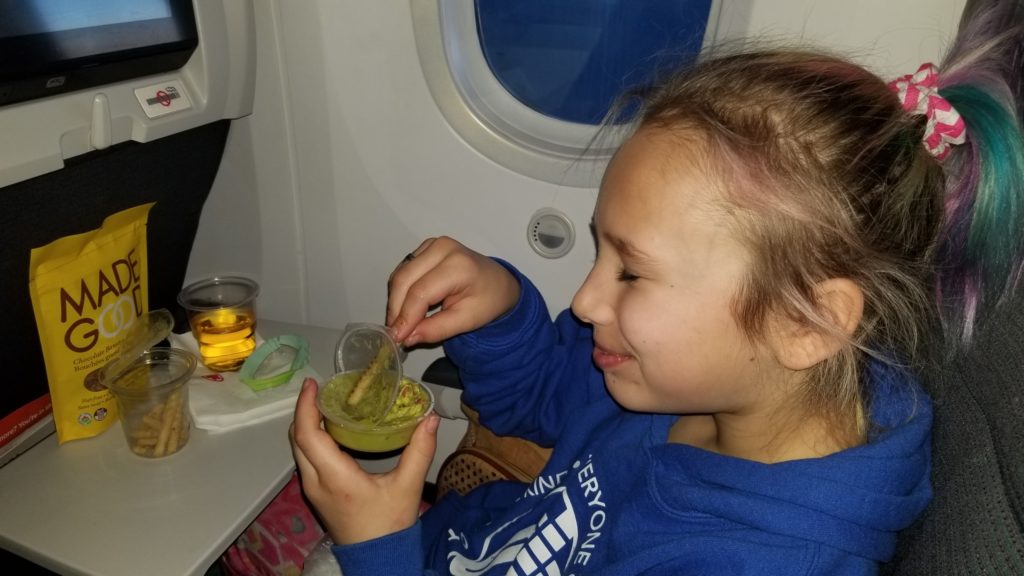 All photos credited to the author, Becca Alkema

The design details that make a great airport