The rebranding is subtle but significant. It respects the airline’s heritage while embracing modernity.

Aegean head of brand communications Giota Gatsiou tells Runway Girl Network the airline wanted a more confident image “with more dynamic views, with the Greek spirit which the airline has long been representing all over the world. The new values of the new brand are the values that all Greeks share: harmony, symmetry, balance, and hospitality. All of this represents the Greek spirit.”

PriestmanGoode director Luke Hawes says the goal was never to make a complete departure from the current brand, but rather to emphasize those elements for which customers had already built an affinity. “Fundamentally the new brand is an evolution,” he explains, noting that it is “more contemporary and something that can be used on many more platforms, particularly digitally”.

The airline’s logo of two seagulls in-flight now features more dimensional seagulls, pointing forward, and has been converted into a design element that is echoed in the interiors and livery. The new branding initiative also includes meal service items, and introduces a charming set of white seagull salt and pepper shakers. 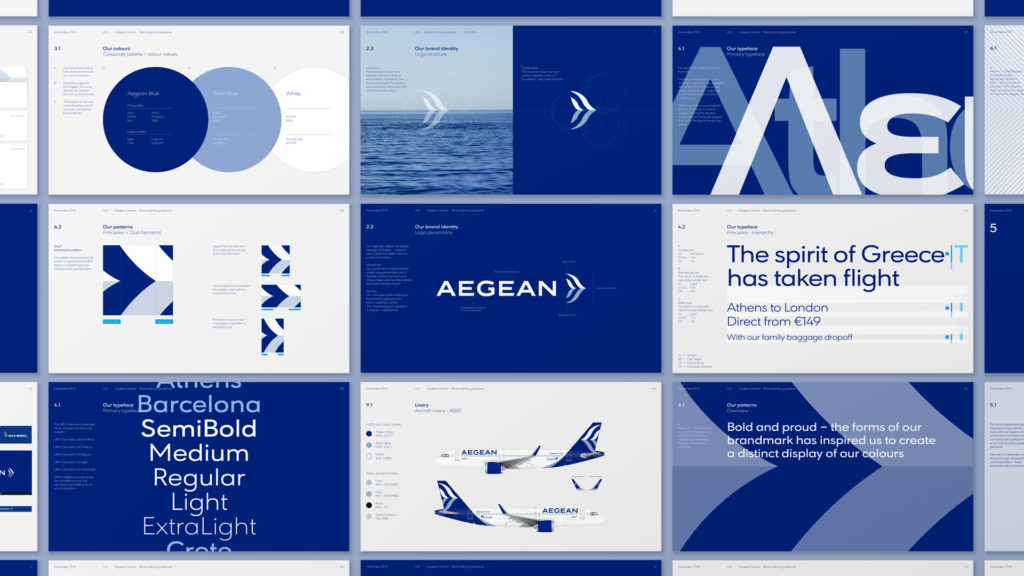 The designers also took their inspiration for the new brand from nature – the sea and sky – and from Greek architecture. “The Greek architecture is more relevant to the new wordmark, which is much more structured and stable and strong,” says Hawes in reference to the typographic treatment of the business name.

The new aircraft interiors, meanwhile, feature simplicity in color and complexity in form, with elegant stitching details on the backs and headrests that carry through the forward movement of the new seagull logo and a white-on-white brand mark panel on the bulkhead.

“The colors are based on what has gone before. We lost the red and include a more silver blue secondary color, along with the darker blue and the white,” says Hawes. “The white brand panel is supposed to mimic white stone – it’s painted aluminium. It is three-dimensional and 20mm thick, with the pattern cut out of the aluminium. It really gives a beautiful effect on board, and casts a little shadow that is the same pattern as the stitching [on the seats].”

The stitching detail on leather is complex, with Hawes saying PriestmanGoode gave the seatmaker, Collins Aerospace, “quite a challenge”.

He adds, “We made master samples in heat embossed leathers, with stitching between the seams, and they matched our master sample. The consistency through the rows of seats is perfect.” 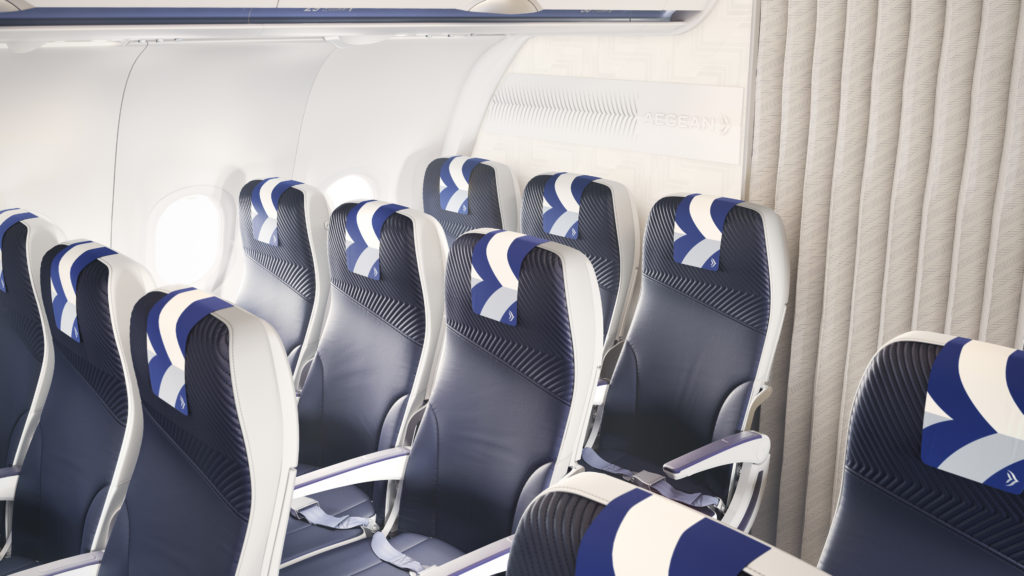 Other new interiors elements include headrests with the twin seagull logo as a stitch detail, and antimacassars. Image: PriestmanGoode

Aegean plans to take delivery of 46 new Airbus narrowbodies by 2025 – a combination of A320neos and A321neos – with an option for 12 additional aircraft. The new twinjets will feature the new interiors and livery.

No retrofit of the existing fleet has yet been confirmed, but the new branding was designed to carry through to the airline’s digital channels and the designers worked to ensure that the new lettering and logo transferred well to the digital space.

“The world has changed immeasurably since the last iteration of the airline’s brand identity, and airlines now need to have a strong online presence. We have designed a distinct identity that can apply across both physical and digital touchpoints,” says Anthony Morgan, head of brand at PriestmanGoode.

“Working with PriestmanGoode has been an incredibly fruitful partnership,” says Aegean marketing director Marina Valvi in a statement. “They worked closely with us throughout the process, to understand our needs and to create a new brand identity that was respectful of our much-loved existing identity and reflected our vision for the future. We’re thrilled with the end result and are looking forward to rolling this out across all our products and services.” 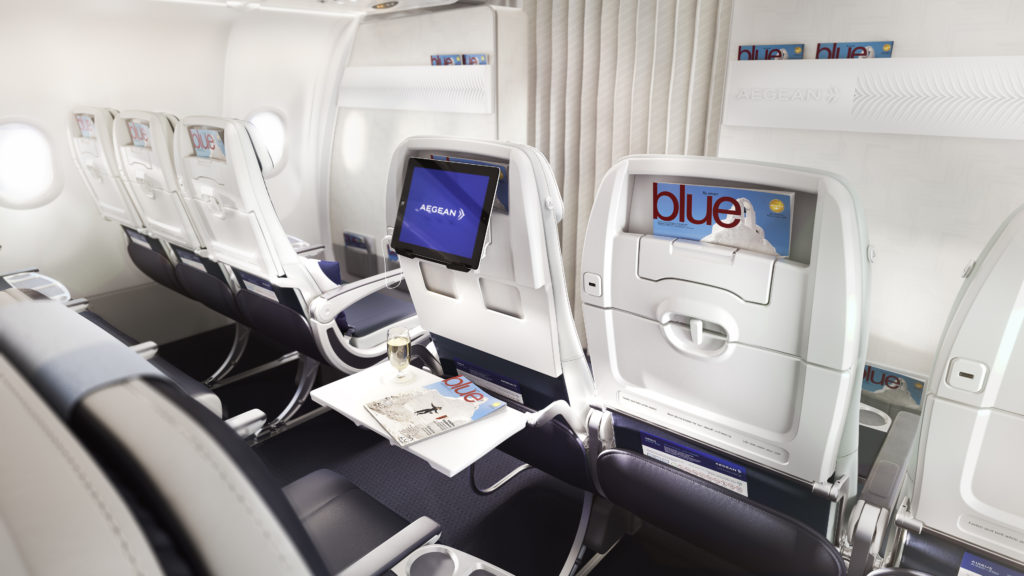 The new brand identity further represents the Greek spirit through a core color palette of Aegean blue, silver blue and white, and celebrates the whites and silver-blues of the Greek skies, and the vibrant blue of the Aegean Sea. Image: PriestmanGoode