When easyJet removed two seatbacks from one of its in-service aircraft, it didn’t imagine that a single photograph from a passenger of the non-functional seats — and an ill-judged demand from its social media team to remove the photo — would set off an Internet firestorm.

Despite some confusion about the flight number, data from Flightradar24 and Airfleets.net suggest this aircraft was G-EZDI, a 12-year-old Airbus A319. It seems the aircraft operated from LTN to GVA and back on 6 August, arriving in Luton at 1123 and not departing again until 0708 the next morning, which would coincide with an easyJet statement to Runway Girl Network that it took the aircraft out of service for repairs.

The seats concerned would seem to be 11B and 11C, the middle and aisle seats in the second emergency exit row on the left hand side of the aircraft (easyJet’s high-density A319s have, unusually, two overwing exit rows).

#easyjet beats @Ryanair to have backless seats. @IATA @EASA this is flight 2021 Luton to Geneva. How can this be allowed. @GeneveAeroport @easyJet_press @easyJet pic.twitter.com/EthMoWRR8P

On an initial level, assurances from the airline that it took the seats without seatbacks out of service satisfied the general media.

But subsequent details from the airline and the UK Civil Aviation Authority regulator in response to questions from RGN raise questions about whether passengers seated behind these inoperative seats were placed in unsafe situations.

It seems easyJet operated 12B and 12C, the seats behind the missing seatbacks

An early statement from an easyJet spokesperson confirmed to RGN that “just the two seats affected” were taken out of service. RGN imagines this would be 11B and 11C seats, the ones with missing seatbacks.

A photograph from a different angle published online, believed to be the aircraft concerned, show two inoperative seat notices on 11B and 11C but not the seats behind in row 12.

It is unclear whether a passenger was seated in or behind 11A in the affected row.

There are also questions as to whether overwing door 3L — the door in row 11 — should have been counted as operational with passengers missing from its row, and whether the passenger in 12A was also put at risk in the event of a head impact incident.

The most severe risks, it would seem, would be to passengers seated in 12B and 12C, immediately behind the missing seatbacks.

It appears from statements issued by the airline and its regulator, the CAA, that easyJet seated passengers in these seats.

In an early response to an email from RGN with the initial viral photograph, a CAA spokesperson said:

We have discussed this with easyJet and are satisfied the seats in the photograph were inoperative and not used by passengers during the flight. We do not think easyJet breached and regulations by seating pax in the row behind the inoperative row. [sic]

Statements from easyJet and the CAA seem to be at odds with the certification guidance. Neither the airline nor the regulator provided responses to questions about how and why their interpretations of this guidance differed from the relatively clear wording of this Advisory Circular.

“Philosophically, the objective of the requirement is to test the critical structural configuration (that is, the seat with the critically stressed components in the primary load path). The primary structural load path and other components that influence occupant injury criteria (for example, HIC or shoulder restraint retention) are evaluated to generate the baseline certification tests,” the Advisory Circular reads.

“In all cases, the test article must be representative of the final production article in all structural elements and must include the seat cushions, restraints, and armrests. It must also include a functioning position adjustment mechanism and correctly adjusted breakover (if present),” it says.

That would seem to imply that seats cannot be tested without seatbacks, and are thus not certified missing these or any other structural element.

Crucially, according to the Advisory Circular, “the primary load path for row-to-row HIC tests typically includes components in the seat assemblies, such as those installed on the seat back (for example, food tray tables, video monitors, and telephones), recline mechanism, breakover devices, seat back energy absorbers, seat back attachment hardware and, in some cases, arm rests.”

Those energy absorbers in particular would be directly relevant to the situation as presented here.

And, lastly, referring to the behavior of the anthropomorphic test dummies (ATDs) that simulate humans in seats, the Advisory Circular notes that “Some components affect the positioning of the occupant in the seat place that in turn can influence ATD dynamic response and occupant injury criteria. Examples include seat bottom cushions, bottom cushion support, armrests, and seat backs.”

It would immediately seem evident from a simple examination of the photograph that the armrests, breakover bolts and other structural elements of the seats present a clear and present danger to passengers in the event of a crash, within the required yaw boundaries of the tests.

“These injury criteria are dependent on seat pitch, seat positions occupied, and the effect of hard structures within the path of head excursions in the ±10 degrees yaw attitude range of the Test 2 conditions,” states the Advisory Circular, with diagrams and other references making it clear that the armrests alone in the absence of a seatback would pose a safety hazard.

Seatmaker experts seem to disagree with the CAA’s interpretation

RGN was unable to ask the seatmaker of the specific seats for certification details because easyJet could not identify the seats. RGN is given to understand the seats concerned are the Weber AI-1000 model, but neither easyJet nor Safran Seats, a predecessor of which absorbed Weber, could confirm, although an online secondhand seat market shows easyJet’s distinctive orange square fabric pattern on seats listed as AI-1000, noting that these seats are subject to the modern 16g certification under TSO-C127a and other relevant regulations. Safran Seats, citing staff absent on holiday, could not confirm whether the seats were indeed AI-1000. 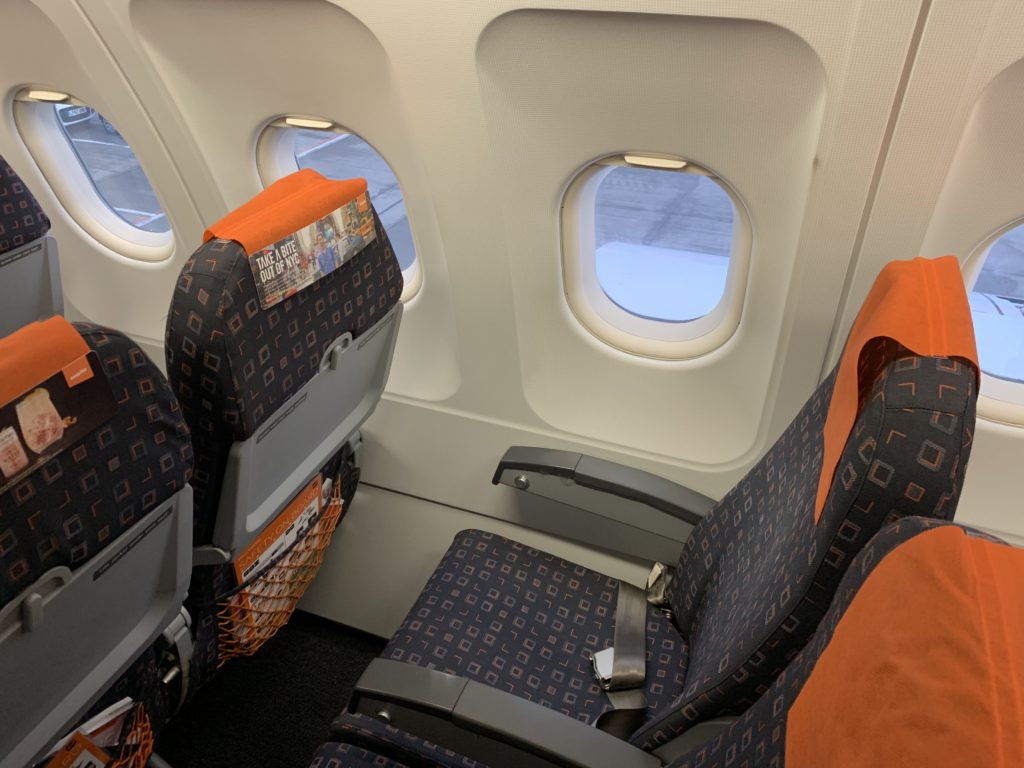 RGN is given to understand that these seats are Weber AI-1000, but neither the airline nor the seatmaker could confirm. Image: John Walton

Experts from seatmakers and a non-CAA regulator spoke on background with RGN. The seatmakers spoke on the basis of not being named so as not to adversely affect commercial negotiations, while the regulator provided information on background, not for attribution.

The seatmaker experts RGN spoke with said that seats are not generally certified row-to-row with missing structural elements such as seatbacks, as clearly specified in the FAA Advisory Circular.

If seats were not tested and certified as safe with major structural elements like the seatback missing, that would be a serious safety issue.

A CAA spokesperson told RGN that “We do not think that the seat row behind the inoperative row should automatically have been taken out of use. There are no regulations that would require this to happen, however, it is for the operator to determine whether this row was acceptable for passenger use.”

Yet that CAA spokesperson followed up shortly afterwards in response to an RGN question, saying, “As far as I am aware we did not directly discuss the row behind with easyJet.”

RGN specifically asked both easyJet and the CAA to cite regulations that would permit operation of seats immediately behind missing seatbacks, in the face of multiple regulations stating clearly that seats would not be certified with missing seatbacks in front of them. Neither the airline nor the regulator responded.

After followups from RGN, the CAA said only, “We are aware of this particular incident and are in contact with the airline to determine whether any further action is required.”

Meanwhile, easyJet responded that, “Although at no point was safety compromised, as an internal investigation is ongoing we are unable to provide any further detail while this is taking place but we will review any resulting recommendations with a view to implementing them.”

In Conversation: ATR with Zuzana Hrnkova