The delivery of a new Airbus A330neo is a big deal for New Caledonia, the French territory that sits in the southwest Pacific between New Zealand and Papua New Guinea, and indeed for its airline, Aircalin. From a passenger experience perspective, there are marked improvements compared with the airline’s existing fleet of Airbus A330s, acquired in 2002: brand new seats, inflight entertainment and inflight connectivity throughout.

In business class, Aircalin selected the new Stelia Opal seat, one of the latest generation of compact staggered seats.

The airline brands this, rather delightfully, as Business Hibiscus, the flower that is also represented on the aircraft’s livery.

Chief commercial officer William Le Grand explained to Runway Girl Network (in French; Le Grand’s words are paraphrased in translation) that Aircalin worked with Stelia designer Bruno Saint-Jalmes to develop the new seat, including the wonderfully whimsical jewelry box-inspired storage space to the side of the passenger. 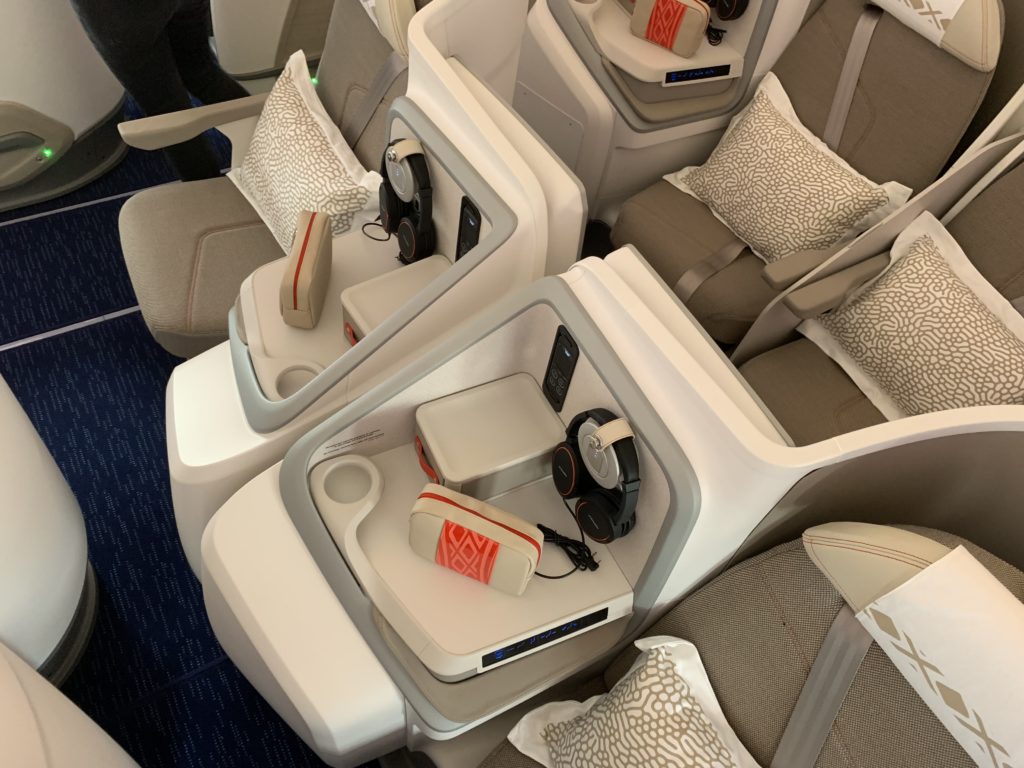 The centre section of the business class section is in honeymoon-divorce alternating rows, which is smart for a carrier with Aircalin’s market segmentation. Image: John Walton

This and other pops of orange are pleasant in a cabin that would otherwise be rather sea-of-white-thermoplastic, and indeed it will be for Aircalin to ensure that the mood lighting in the cabin (which was not in operation during visits to the aircraft today in Toulouse) is designed to wash the seats attractively. 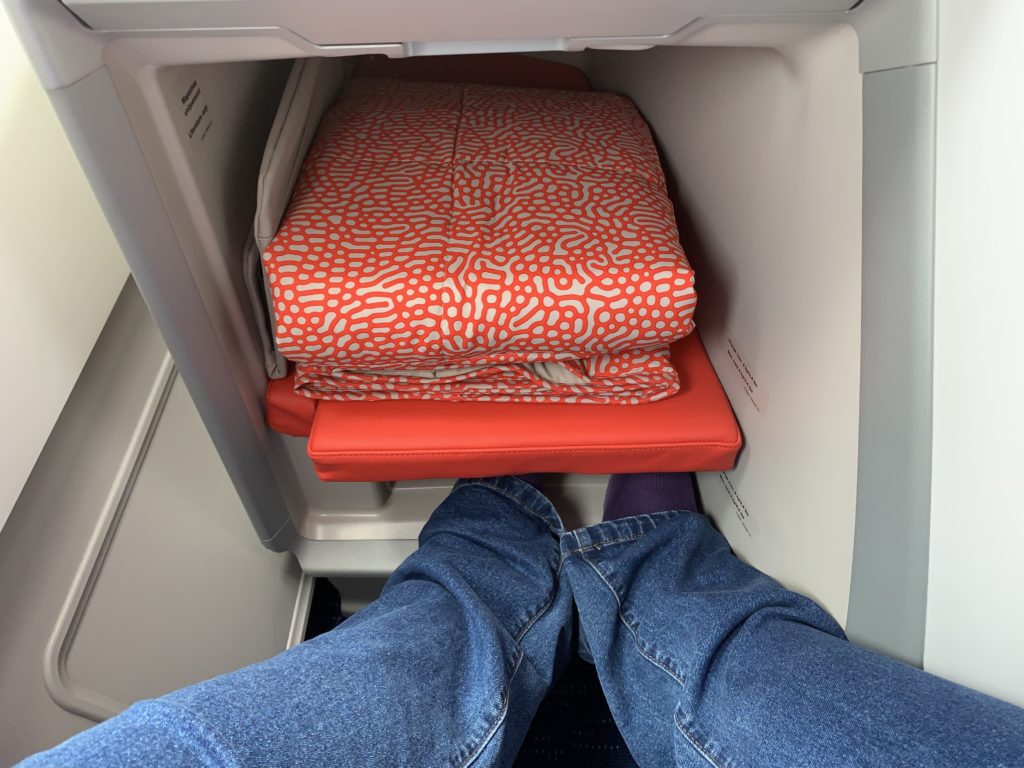 Throughout the rest of the aircraft the seats are from ZIM, with the aircraft marking the arrival of premium economy for Aircalin. This new cabin offers 21 ZIM MAGIC seats in three rows of 2-3-2, pitched at 38 inches in the usual standard for premium economy. These feel, however, a little narrow given the amount of space that should be available in the cabin. 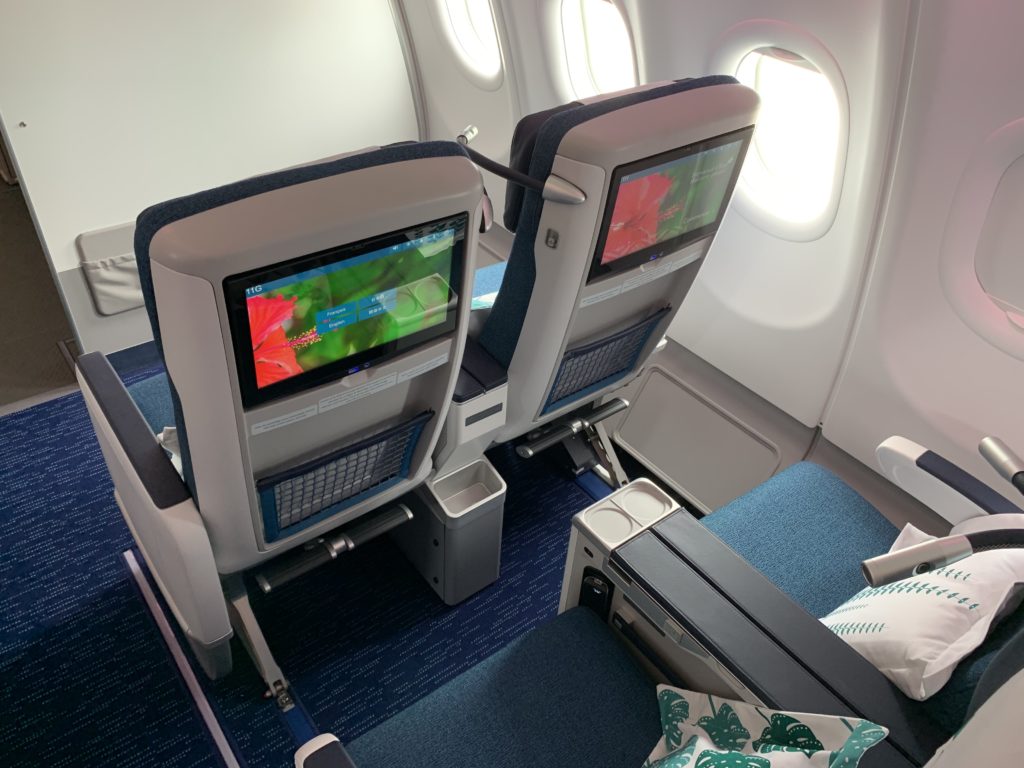 Pleasingly from a passenger experience perspective in regular economy for an airline that is largely focussed on leisure and VFR travel, economy seats remain in the wider Airbus configuration of 2-4-2 rather than the 3-3-3 more frequently seen in this sector.

These are ZIM Flexible NGs, a fully featured product with 11.6-inch inflight entertainment screens and inflight power from AC and USB outlets.

(Interestingly for observers of the inflight power segment, the airline took pains to highlight that its USB sockets all deliver 2A to each seat.)

In the flesh, the seats are fine, but the hard metal footrest is a real minus for taller passengers: it hit this journalist right at the shins, and that was the general consensus among attendees 5’9” (1.75m) in height or greater.

The ZIM seats are fine — apart from the shincracker of a metal footrest. Image: John Walton

Throughout the aircraft, Safran RAVE inflight entertainment is on offer, on 11.6”, 13.3” and 15.6” screens in economy, premium and business respectively. Aircalin’s Le Grand highlighted the hot-swappability of the screens as a key decision driver here when talking to RGN.

Director general Didier Tappero also highlighted that the airline maintained an economy comfort standard of 31 inches of pitch with fully featured seats — including specially designed seat foams — because many of its travelers are connecting on itineraries approaching 24 hours to Metropolitan France, for example. The airline is proud of its well-regarded economy class, which has won awards for comfort in the overseas France categories from the French ratings and reviews site Flight Report.

The airline’s longhaul routes are Tokyo and Osaka, where passengers connect to Europe and elsewhere, with substantial south Pacific operations to Australia, New Zealand and other island nations. The additional range of the neos will enable the airline to explore new routes, director general Didier Tappero explained, calling expansion an “essential question”.

In the context of the fight for the middle of the market, it is notable to see the direct replacement by Aircalin of A330-200s with A330-900s, with a growth of just 25 seats between the shorter and longer aircraft.

On the passenger experience side, chief operating officer William Le Grand explained that selecting seats for a small airline like Aircalin is complex given its equally small number of seats required. Aircalin’s previous generation of business class, the Minipod from Rockwell Collins, then of course B/E Aerospace, was sourced from the aftermarket as a result.

The bigger players, it seems, do not feel the pressure to compete for what is ‘just’ a couple of shipsets. 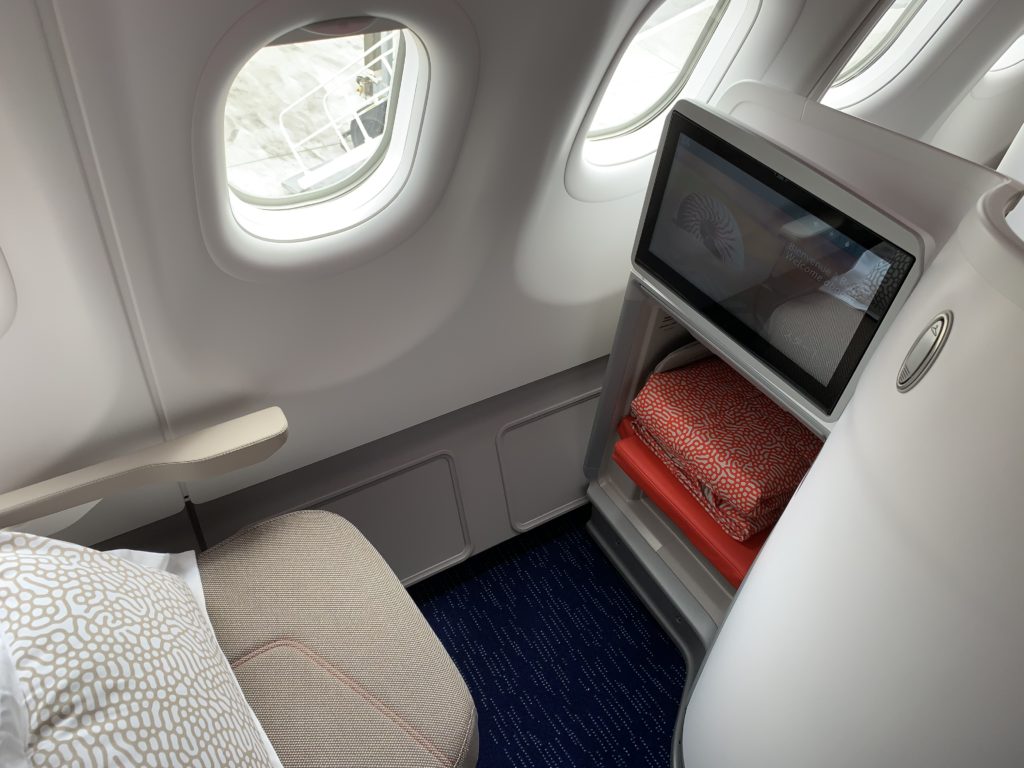 Opal, in one of its first outings, stands up well to the promise. Image: John Walton

In speeches at Airbus, the airframer, powerplant supplier Rolls-Royce and the airline also emphasized the reduced environmental impact of newer engined, in the context of a drive by the national airline — whose territory is already being impacted by the effects of the climate crisis — to do its part to improve its environmental impact.

And overall, the enthusiasm of New Caledonians at the delivery was fascinating to observe: with a relatively limited choice of airlines, a strong background in traveling regularly, and pride in their hometown airline, travelers in the territory are only too keen to know how they will be traveling in the future. 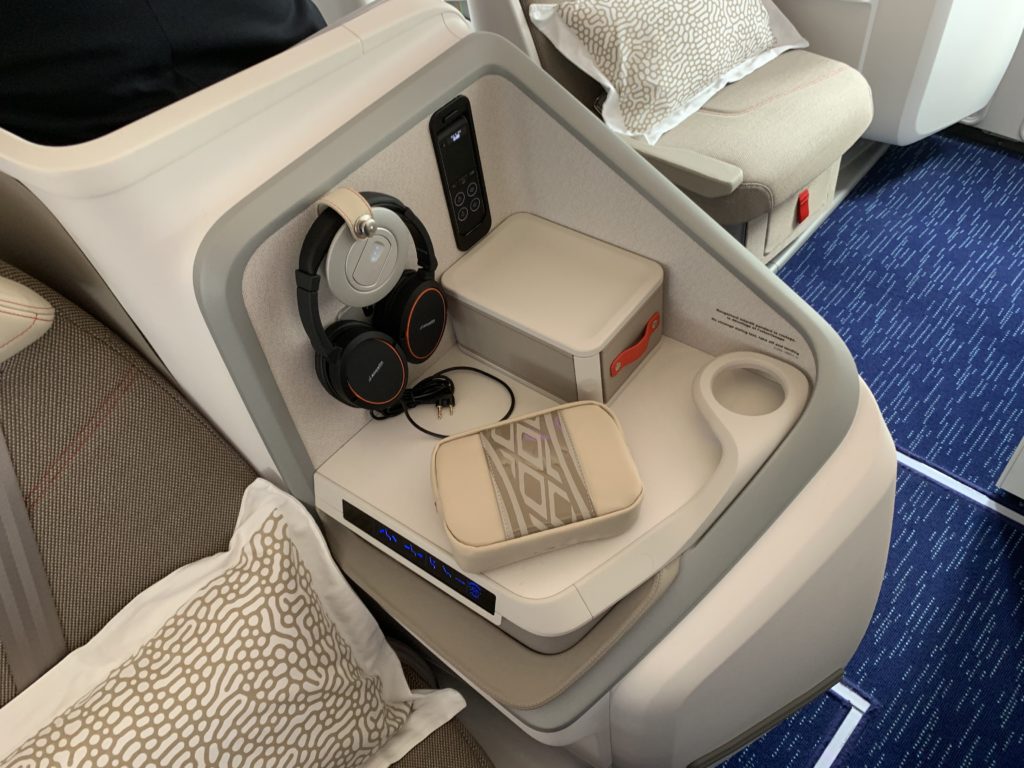 The whimsical jewel-box storage is a delight. Image: John Walton

John Walton was a guest of Airbus in Toulouse

In Conversation: the Mitsubishi SpaceJet with Isaac Alexander