RAVE Ultra, Zodiac Inflight Innovations’ impressive new inflight entertainment system, will roll out on Recaro 3710 longhaul economy class seats for a linefit Boeing 777X customer. Significantly, given Zii’s prior challenges in gaining linefit offerability on the 787, RAVE Ultra will also be made available to 787 linefit customers at the same time as the 777X.

The challenges that resulted from then parent Zodiac Aerospace’s production and delivery problems (as reported by RGN Premium) are no longer affecting Zii, assured Zii chief commercial officer Larry Girard at last month’s APEX EXPO in Boston. “All of that’s past,” he said, noting that “the qualification for this unit [RAVE Ultra] on the 777X does qualify us for the 787 Dreamliner, so both of those.” Zodiac is now part of Safran.

On the MAX front, “it’s a post-delivery mod. So, they get the airplane green, and then they put the seats in.” Though Girard did not mention flydubai specifically, we do know that the Dubai-based budget carrier pivoted from now-defunct Lumexis’ IFE product to RAVE for its new 737NGs and MAXs, and has long been comfortable with the greenfield retrofit process.

But the RAVE Ultra product can be linefitted on single-aisle aircraft before 2020. “This could go on a single-aisle on MAX starting in mid-2019,” confirmed Girard. “So there is two different qualification levels at Boeing. The single-aisle is easier than the twin-aisle.”

Countering the notion that embedded IFE will not have meaningful placement on narrowbody aircraft in the future, Girard revealed that roughly two-thirds of Zii’s entire backlog (including prior generation RAVE units) constitutes single-aisle, medium-haul A321neos, A320neos and Boeing 737 MAXs. “We have a significant backlog there,” he said, and part of the driver for this is that these aircraft types are plying longer and longer routes for airlines.

On the inflight connectivity front, Zodiac “has stayed away from the service side of the industry altogether”, noted Girard, though the firm does offer terminal hardware to support Inmarsat GX as part of its portfolio of IFEC offerings.

“I think what we do probably better than anybody, quite frankly, is integrate an entire system. It’s one thing to put an antenna on the roof, which you need to do, but you also have to get it all the way to the customer. I think we have the best performing cabin wireless system of any of the suppliers out there and we have integrated [with] the other GX VARs – other than Thales and perhaps now Panasonic – but certainly if you talk to SITAONAIR, who is a very good customer, Inmarsat Direct is a very good customer and even Rockwell,” said Girard.

Will Zodiac integrate with “Panasonic GX” in the future, given that Panasonic’s strategic collaboration with Inmarsat sees it selling GX for new business? “Well, we will see,” he said. “But what we do is that we take the Honeywell GX system, we put it together with the radome, with the installation, with an adapter plate, with wireless access points, [and] a server that has a piece of software in it that will work with Inmarsat and allows any of the VARs to plug-in their portal or anything else. So, we present that and quite frankly it has been very successful.”

The Zii executive continued, “I think we are the only ones that can do that linefit on all Airbus platforms for GX. So today Panasonic, if they wanted to sell a GX system I don’t believe they could offer it linefit on Airbus. Not that they couldn’t get there because certainly they could, but as of today they couldn’t do it. They would actually probably come to us or they could come to Thales. I don’t know what’s the lesser of two evils here. But certainly we are in the business of selling terminals to VARs and we would not withhold the terminal from Panasonic.”

It’s the type of collaboration that a growing number of #PaxEx industry stakeholders are embracing and celebrating. “What I think we want to offer ultimately is a generic terminal that anybody that has a service can offer. That’s where we’re headed for the future,” revealed Girard.

Mary, I have always said this – I believe that if I have parity on the connectivity side that I can compete on the IFE side.

Right, so if it’s an airline that is, that has a proposal for IFE and connectivity, I don’t care per say about the connectivity, because I have parity, so if Panasonic is offering GX and I am offering GX, all that really means is that we are competing at the IFE level. Right? Nothing’s changed.

So, they had Ku and IFE and we had GX and IFE and for the most part there is parity there and some people might prefer Ka over Ku or vise versa but at the end of the day the competition really came down to the IFE system

Yet in a world where Viasat is working to bring high-capacity Ka to airlines globally, including on widebody platforms, won’t there be less parity on the IFC front? And couldn’t the same be said for Thales if it succeeds in developing a global high-capacity Ka offering as well, outside of what it’s doing as a VAR for Inmarsat GX?

“As long as Viasat doesn’t decide to become an IFE supplier, we have a parity,” responded Girard. “Because quite frankly we work with Viasat too right, I love those guys. Don [Buchman] and I are friends from way, way back. So from my perspective, you know, if Viasat is a preferred connectivity provider and there is IFE going on the airplane, then I am still happy.”

Viasat is open to the possibility of ultimately offering embedded IFE, with vice president commercial mobility Don Buchman telling RGN: “We are only going to do it if we are solving a problem. If the problem has already been solved in the market and there is a solution, we will just integrate with the solution, and work with that solution provider. But if we think there is an opening then we would. Just like in connectivity, we saw an opening, right?” 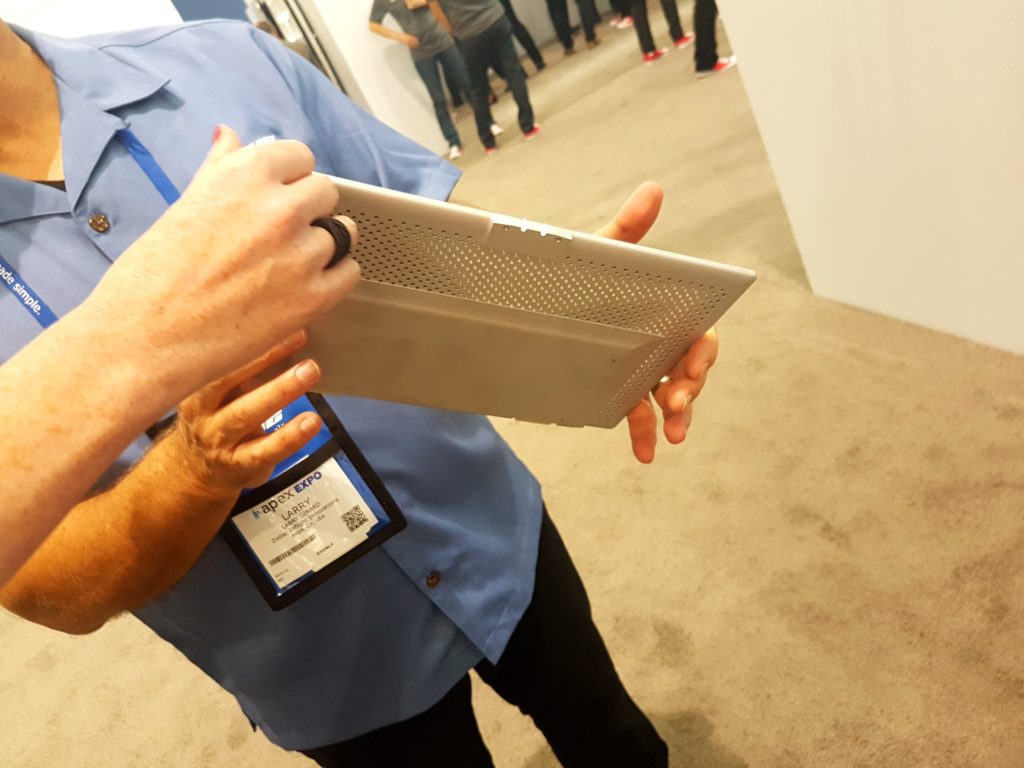