While the majority of the attention around Virgin Atlantic’s new Airbus A350 aircraft is perhaps understandably on its doorless but nonetheless improved Upper Class seats, there are also positive passenger experience improvements in the premium economy and economy sections, with customization of Collins Aerospace’s widely used MiQ seat in Virgin’s Premium Economy cabin, and Recaro’s increasingly popular CL3710 seat in economy.

The Premium cabin is Virgin’s largest ever non-leisure cabin with 56 seats: while the Gatwick-based Boeing 747 fleet used for holiday destinations has 66 seats, the Airbus A340-600 which the A350 is set to replace offers 38. “In comparison to the aircraft it’s replacing, certainly on the New York route, the premium cabin is 30 percent bigger now,” Gareth Salt, A350 programme director, explained to Runway Girl Network. “Premium economy is one of our most popular cabins.”

Daniel Kerzner, vice president for customer experience, highlighted that Premium is not just popular: it’s profitable. “It’s our highest-performing cabin when it comes to a customer satisfaction standpoint, and so for us there’s more of a demand for the premium product that we put out there, not less of a demand for that.”

Yet Virgin Atlantic will be installing eight-abreast, not seven-abreast, Collins MiQ seats on its A350, in the tighter 2-4-2 configuration. Crucially, the question of comparison with arch-rival British Airways is yet to be answered: BA, too, will offer 56 seats, but that means either seven rows of eight seats or eight rows of seven.

RGN asked Kerzner and Salt about whether 2-4-2 premium economy was a large enough “comfort canyon” between the A350’s wide 3-3-3 economy seats, and the 34-inch pitch with which Virgin plans to outfit its extra-legroom economy in particular, and Premium, but the line taken separately by both executives referred back to the existing fleet, which is 2-3-2 on board the A330/A340 and 787 cabins.

“For us, the aircraft is a different fuselage to the rest of the fleet,” Kerzner explained. “The A350 is a wider aircraft, which actually means that you can put more seats in the aircraft without sacrificing comfort for our customers. What we’ve tried to do is put one of the best premium seats on board the aircraft. For a lot of people traveling in premium, that is their business class or their Upper Class experience.” 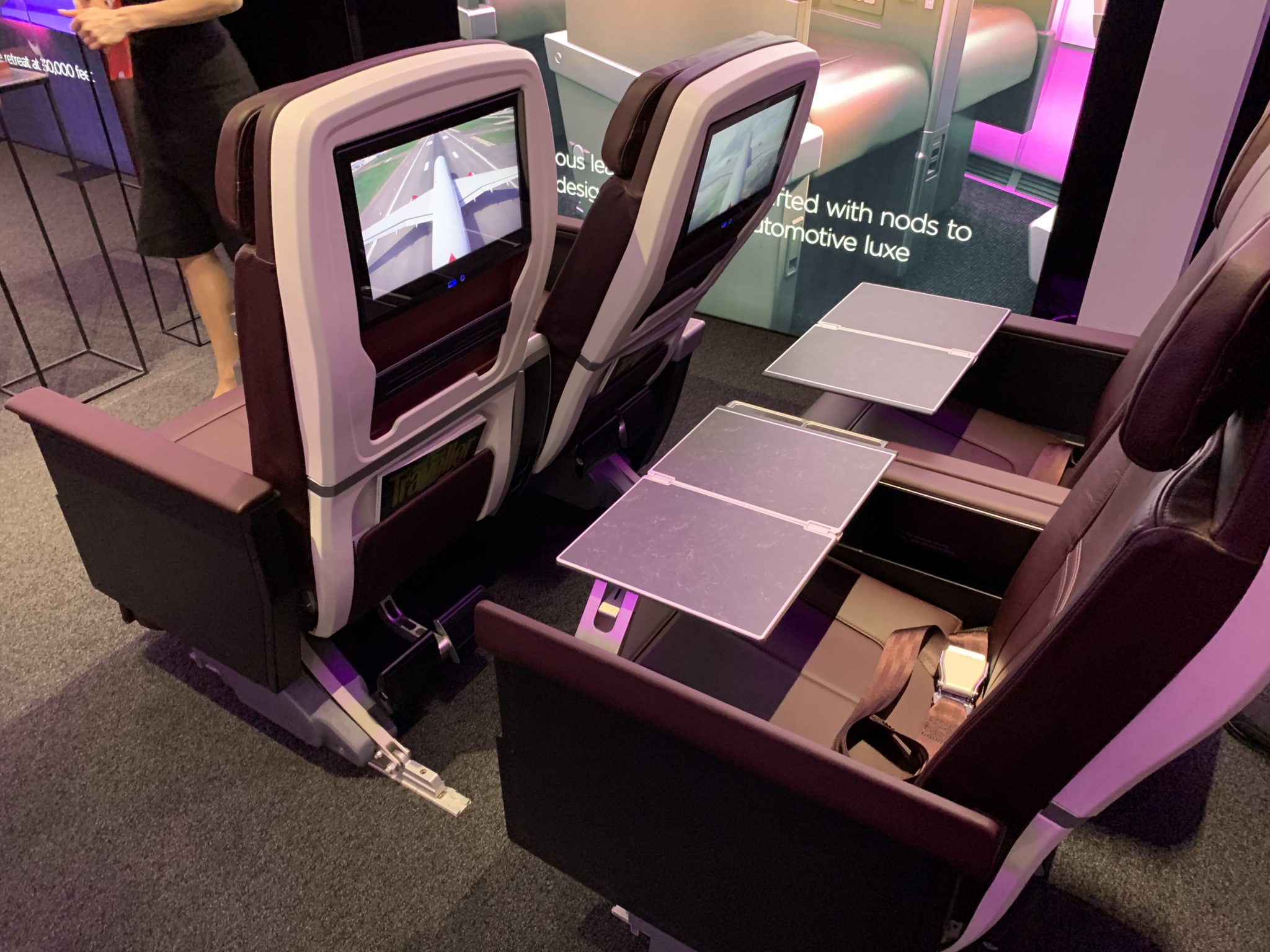 Virgin Atlantic has focussed on refining the color, materials and finish of the hard product, said Mark Croucher, head of customer experience and CRM at Virgin Holidays, recently moved over from the A350 program. “We did redesign the rear shield of the MiQ, actually, working with Collins, both to get the level of quality that we want, the coloring, and the monitor arm. It’s a pretty standard seat, and they’re somewhat less inflexible than others in terms of what opportunities we have.”

But will a well-designed seat make up for width, even with the clever drop-arm of the MiQ platform? 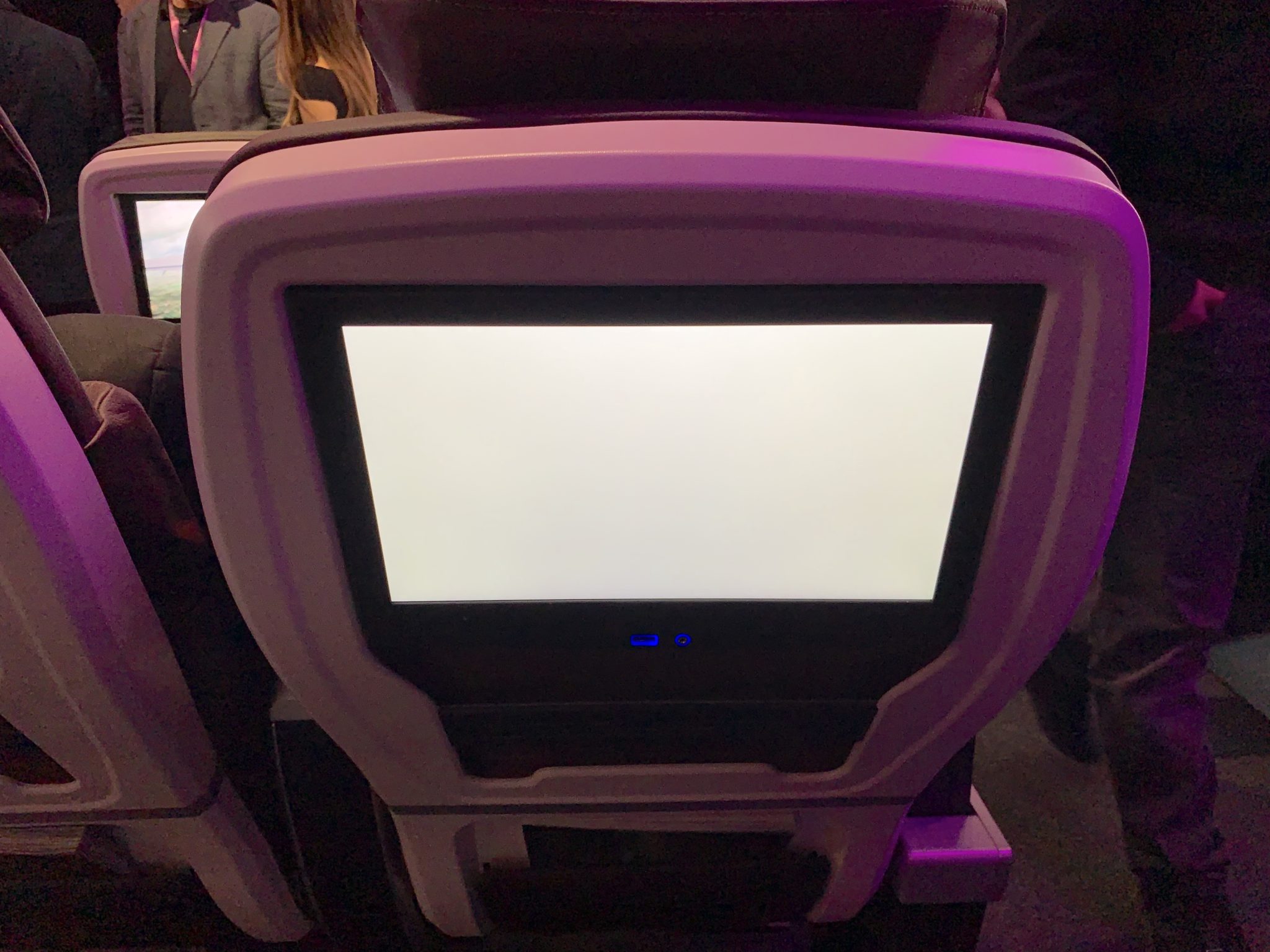 Croucher thought it will, “both from a seat and a service perspective. I think — I will be biased! — but I wholly believe it’s true that we lead in the premium economy market. We have the best seat out there, we have the best service, we have the best food, the Wander Wall, the added snacks that you get on those aircraft. It’s a really good product, and I think the A350 is going to be no exception even with a 2-4-2.” 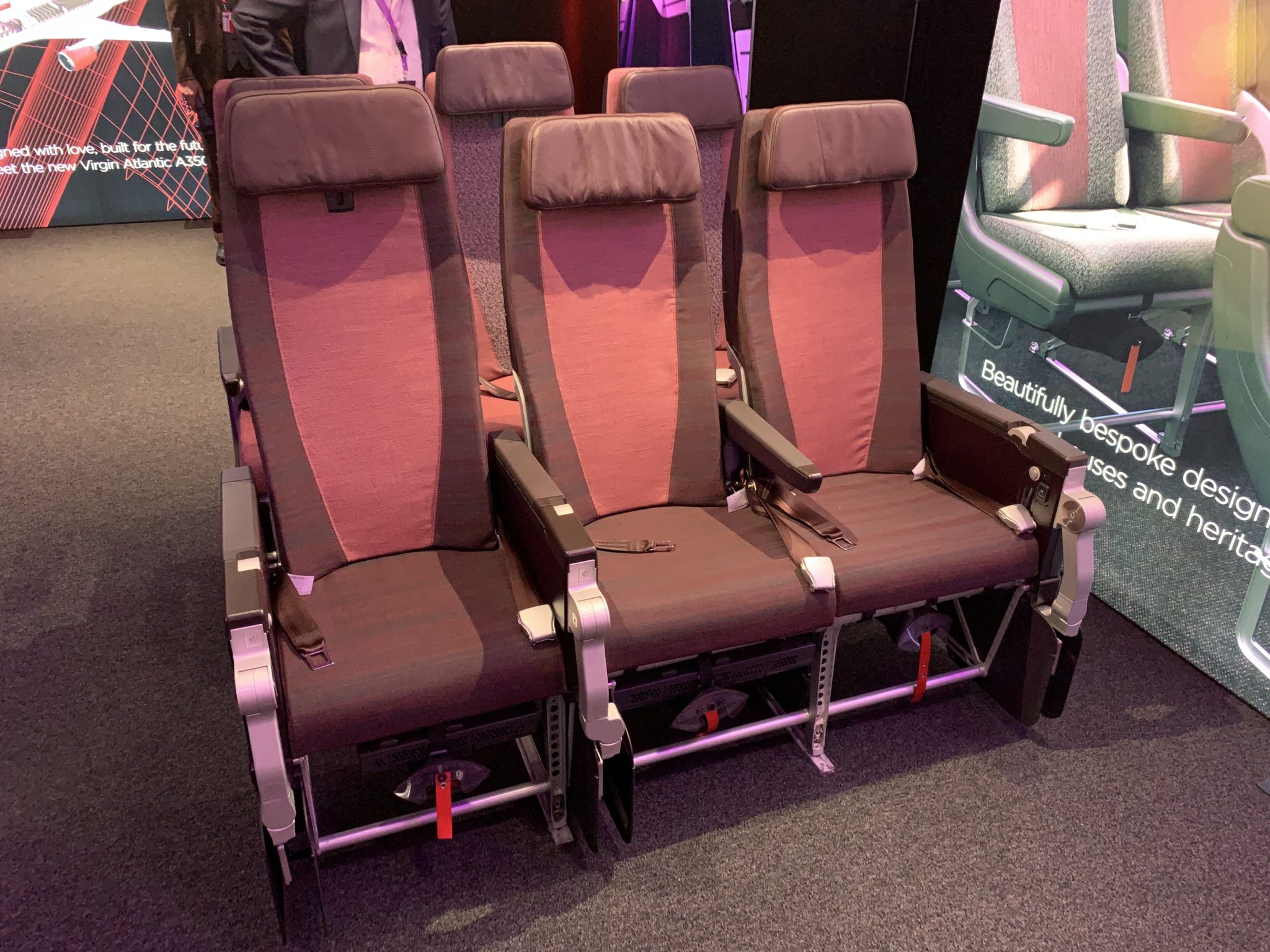 The styling rather unfortunately makes the seats look much narrower than they are. Image: John Walton

A crucial question is the differentiation from economy, where at the rear of the aircraft is the relatively small 235-seat cabin, of which 36 seats are 34” extra-legroom “Economy Delight”, with the rest pitched at 31”: the Virgin standard. The seats are the latest Recaro CL3710 fully-featured space-saving slimline, and the amount of space that the engineering behind these new-generation seats creates was truly remarkable in Virgin’s demo room, and the effort put into the fabric design and conception was equally visible. 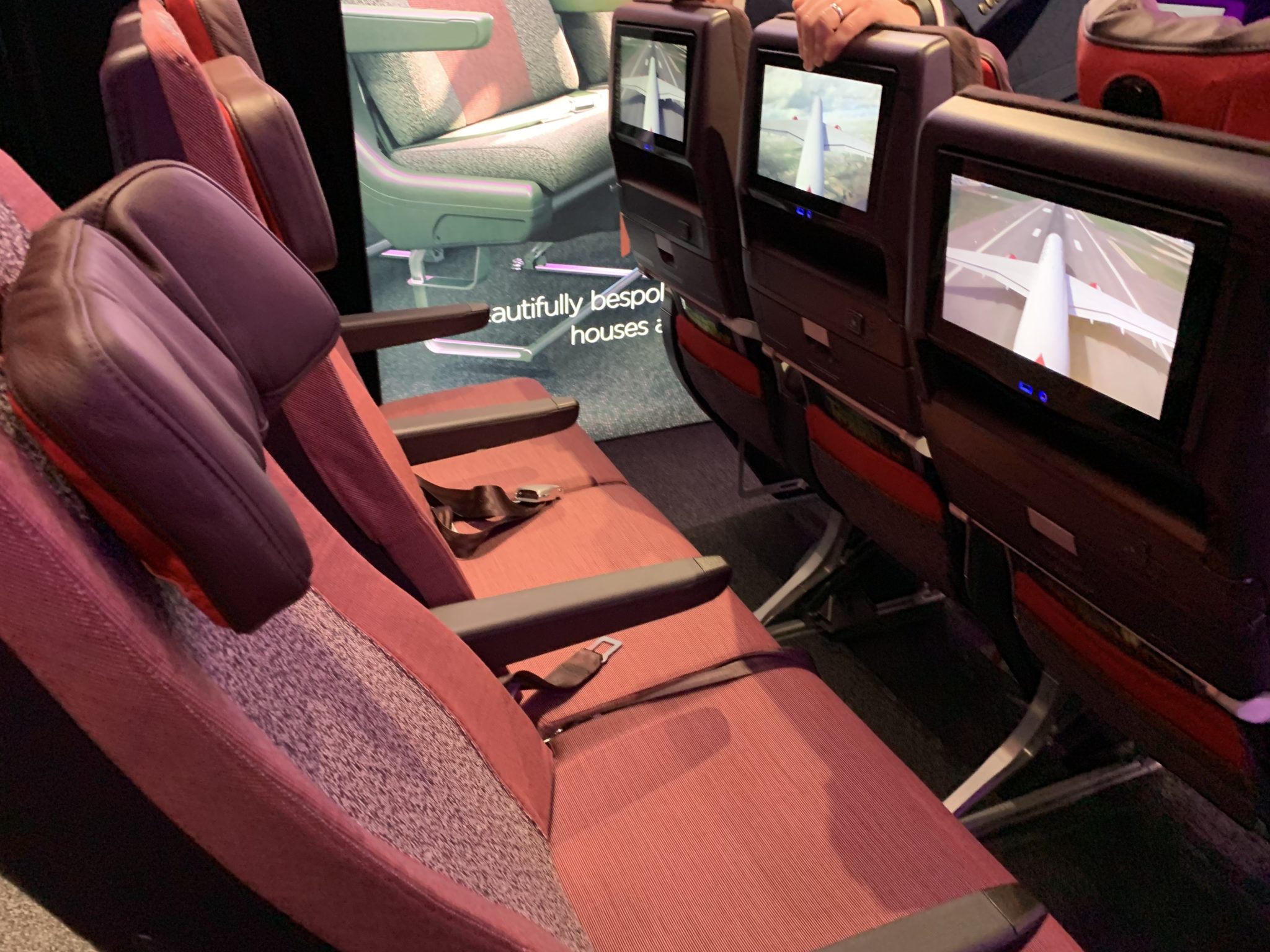 The amount of space squeezed out of the seat pitch by CL3710 is truly astounding. Image: John Walton

It’s a fascinating contrast that at the same time Virgin Atlantic will be offering its widest-ever economy class seat and its narrowest-ever premium economy class seat, on the same aircraft. Observing passengers’ purchasing behavior and relative satisfaction when comparing between cabins on the A350 and across cabins between the Virgin fleet of A330s and 787s will be equally compelling. 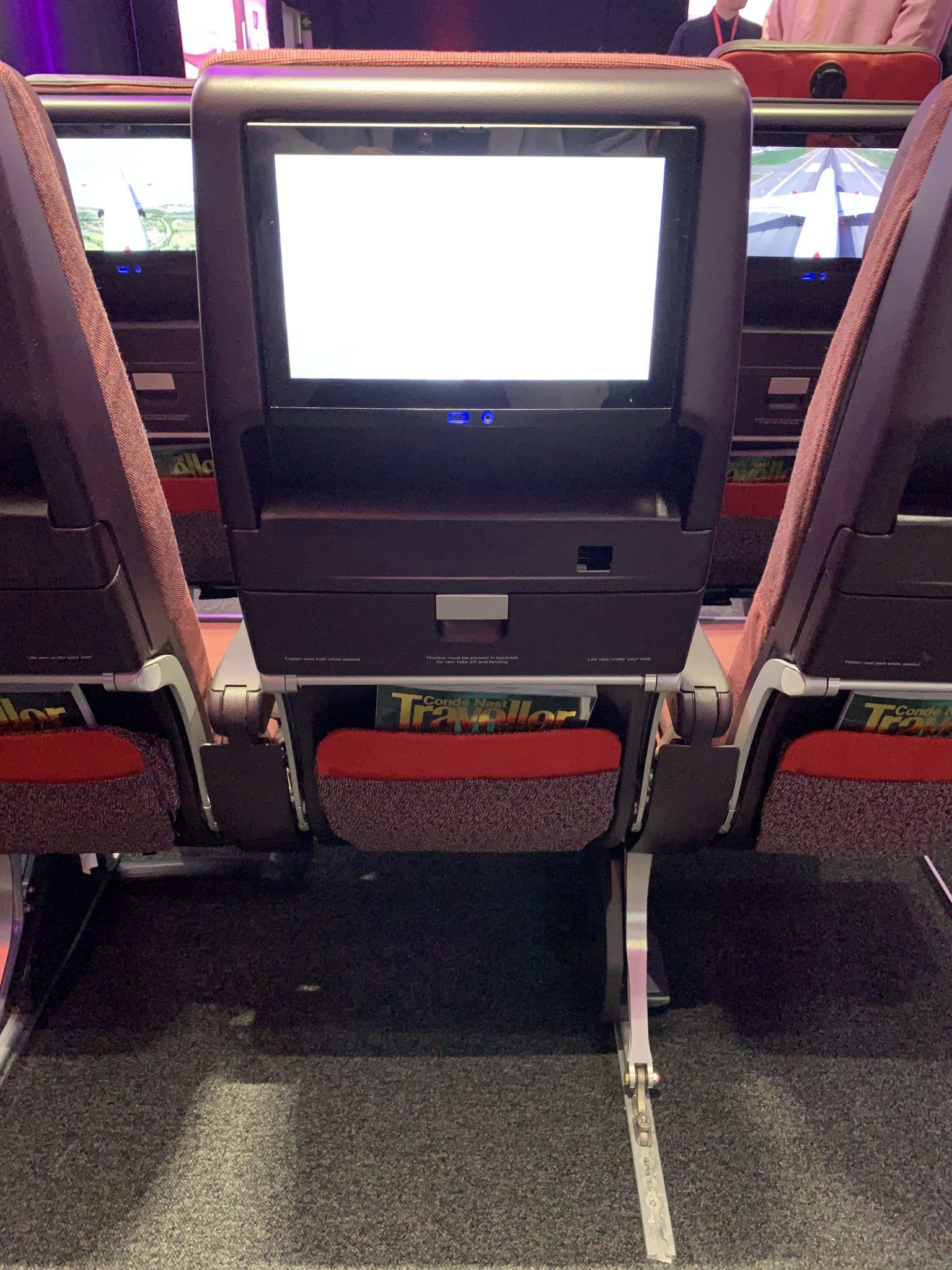 The Recaro CL3710 in its A350 configuration is Virgin’s widest ever economy seat. The RAVE IFE is provided by Safran (former Zii) and the inflight connectivity is Inmarsat GX. Image: John Walton