After a dramatic year for the Bombardier C Series, involving the small airliner programme being largely transferred to Airbus’ aegis, the Canadian airframer isn’t resting on its aircraft interiors laurels. It’s back with an updated cabin for the regional workhorse CRJ, which at present is not exactly a passenger favourite.

Part of the problem is the small overhead bins, which vice president and head of marketing Patrick Baudis and cabin marketing manager Christine de Gagné readily acknowledged when sitting down with Runway Girl Network to discuss the new cabin.

After launching the new Atmosphère CRJ last year, “we have now a great cabin for regional purposes,” Baudis explains.

Bombardier brought a futuristic virtual cabin with eye-catching Tron-style graphics to the Aircraft Interiors Expo in Hamburg, in order to demonstrate how it is bringing the knowledge and experience gained with the C Series’ overwhelmingly popular cabin to the CRJ.

To start, Bombardier turned its attention to the entrance, a space that is seeing increased focus in both the narrowbody market and on larger airliners.

“When you were boarding a CRJ, it was a bit crowded,” Baudis admits. “You have the galley, you have the lavatory – now we’ve cleaned up the entrance, avoiding the choke points with your bags. Now it’s round shapes, a smaller galley on one side. The aisle is aligned with the premium section’s aisle, and we took the opportunity to enlarge the lavatory, and made it a PRM [passengers with reduced mobility] compatible lav, which is, we believe, something the market will require more and more.” 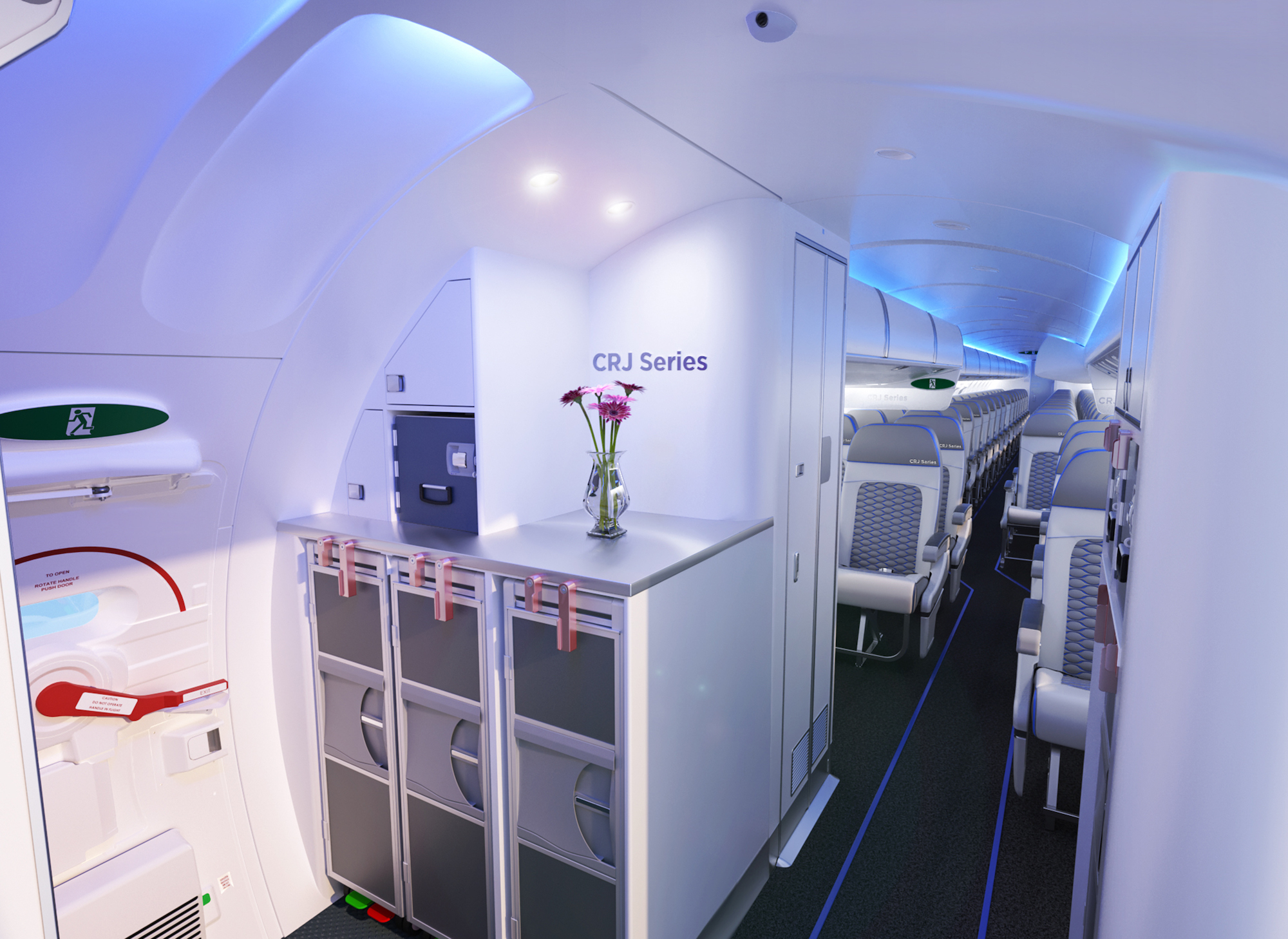 More and more airlines and airframers are concentrating on the entryway space. Image: Bombardier

This is the first regional PRM compatible lavatory, Bombardier says, suggesting that it has increased the area of the lavatory by a full 90%, a marked departure from the trend of the latest tiny toilets on board.

Further, these lavatories are not just necessary for travellers with mobility restrictions: they serve parents with children, older travellers, people with temporary disabilities, and taller and wider travellers. 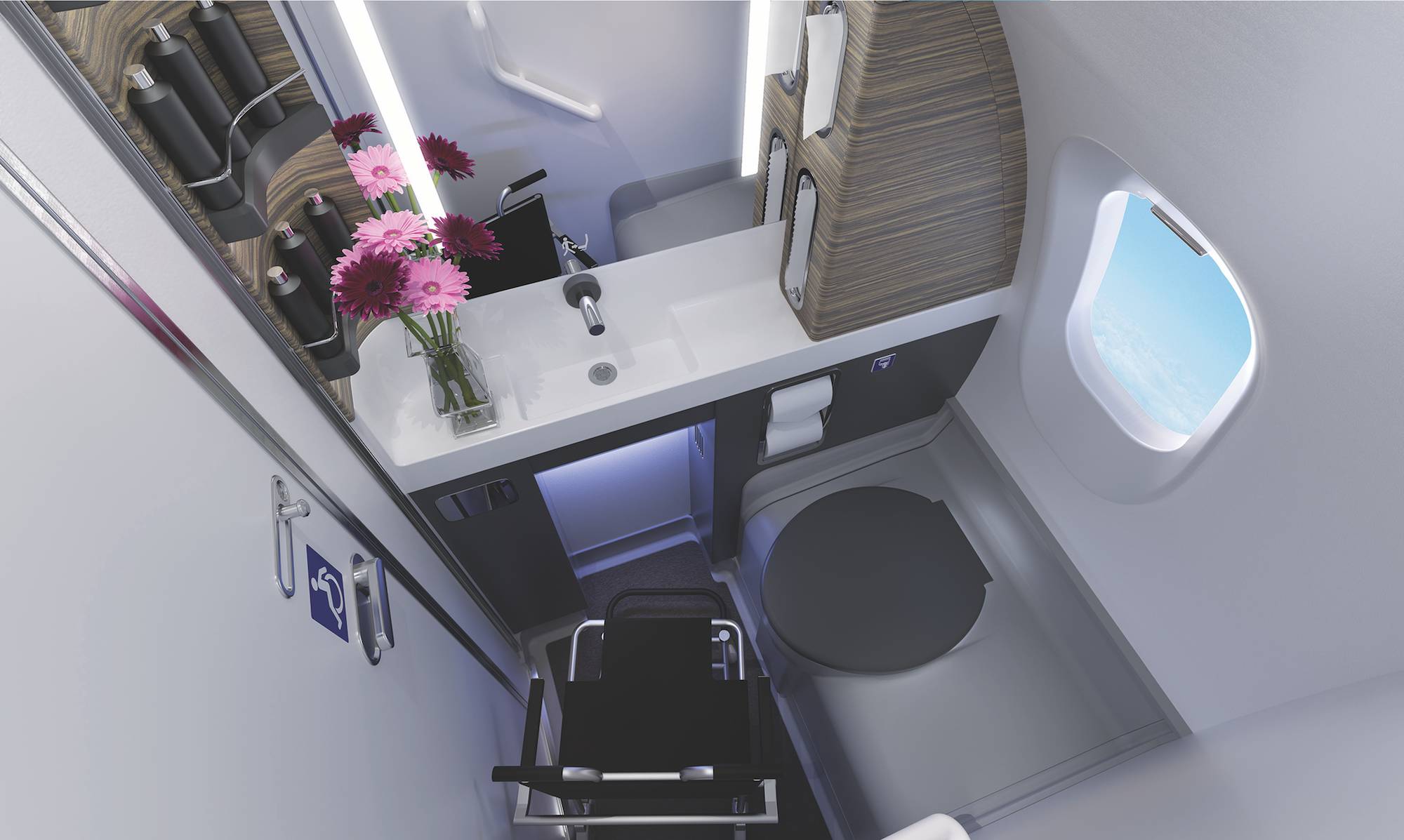 More bags, too, are a key part of the Atmosphère offer. “Airlines wanted to offer, and passengers want to get, more bags on board. With the regional cross-section and the previous design, we realised we couldn’t optimise this,” Baudis says.

“We’ve implemented huge bins for premium class, and enlarged as well the bins by 40 percent in the back. We can fit now – wheels-first – big standard sized roller bags.”

Wheels-in bag storage is a big plus for Atmosphère. Image: Bombardier

The branded cabin move also positions Bombardier to offer continuity of passenger experience to airlines as passengers move between mainline jets and the regional experience, which can see a marked disparity of PaxEx.

“We wanted to offer a canvas for the airlines,” de Gagné says. We will take care of everything that the OEM can touch, so that after that the customer can take it as their own, but at least every bit that concerns the OEM – the bins, the lights – we make them ready to go for them to take ownership. The response is really good, especially on the bins.”

“Airlines are coming with a strong wish on the market to harmonise their brand across their fleet,” Baudis adds. “The passenger experience now: airlines want to harmonise it. Even on that last leg on the regional plane, they want to have the same feeling from a passenger standpoint: mood-lighting, opportunities for branding, those were also big requirements.” 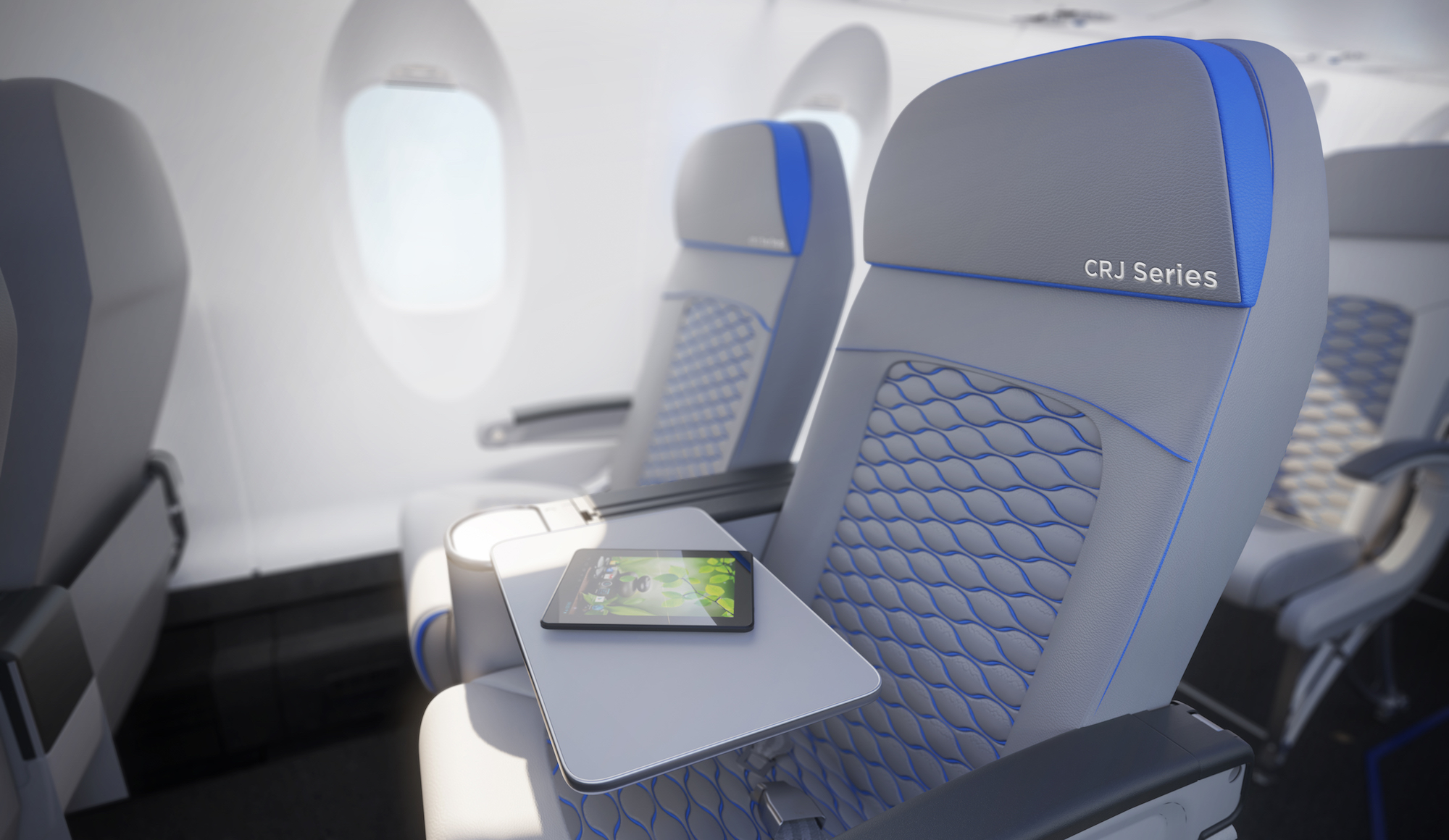 Updated, modern seating will carve out inches too. Image: Bombardier

As Embraer moves up the size chain with the E-Jet E2 aircraft, the smaller regional jet market is largely left to Bombardier, and in many ways the CRJ struggle is real  from a passenger experience point of view. Is a re-cabined jet enough to persuade airlines to buy new regional jets rather than either upgauge to the small airliner market or decide that the increasingly less unpleasant turboprops are a better deal?