Munich-based media distribution and IT company Media Carrier has joined forces with UAE-based newspaper and magazine distributor Todaily to expand its service offering in the Gulf region’s booming tourism market.

Thanks to the cooperation with Todaily as the leading media distributor in the Middle East, Media Carrier can now add top Arabic magazines and newspapers to its digital media library Media Box to cater for the customers of travel companies in this region.

Media Carrier also benefits from Todaily’s long-standing relationships with airlines and hotels in the Gulf region to acquire new clients for the Media Box. Etihad Airways is the first joint client of the new Media Carrier-Todaily cooperation.

After the USA and UK, Media Carrier is now targeting the Middle East with its e-paper library: “We are delighted to partner up with Todaily as the leading print media and media services provider in the Middle East and Gulf region, which is a key market for us,” says Philipp J. Jacke, managing director at Media Carrier.

“On the one hand, we can now expand the portfolio of our sophisticated e-paper library and add top newspapers and magazines that have so far hardly been accessible for us. This valuable new content is a convincing argument when talking to potential new clients and it makes our Media Box an even more attractive and indispensable service offering for hotels and airlines in the Gulf region. On the other hand, Todaily has very good business relations with airlines and hotels in the region that we can benefit from. Given the immense growth of tourism in the Gulf region and the cooperation with our new distribution partner Todaily, we think that there is overall a lot of potential to convince hotels and airlines of our Media Box and acquire new clients.” 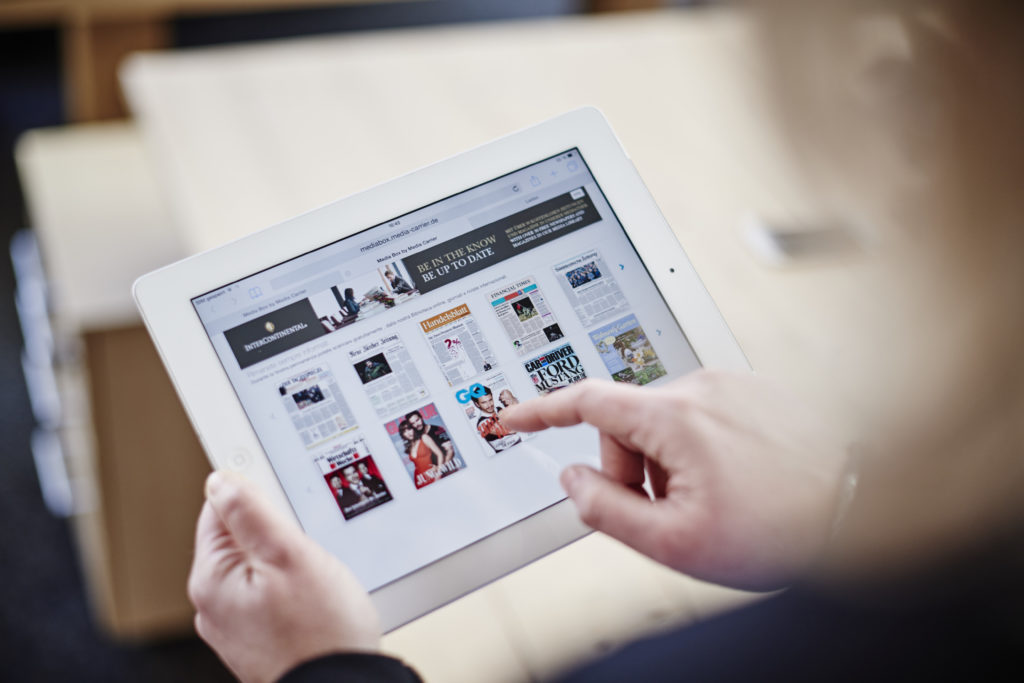 Shortly after its launch, the new distribution partnership can already announce its first success: United Arab Emirates national carrier Etihad has integrated the Media Box in its service offering, providing passengers with digital newspapers and magazines from the region that are supplied by Todaily.

Todaily managing partner Mohammad Albader is delighted to work with Media Carrier as one of the most important global digital newspaper and magazine distributors: “Strategic partnerships are of increasing importance to remain competitive in the age of growing globalisation and digitisation. Doing international business requires successful networking and with Media Carrier we have found our partner of choice that – thanks to long-standing expertise – has strong relationships with publishing houses in Germany, Europe and the USA as well as with tourism clients through its Media Box. Just as Media Carrier can benefit from our network, we can tap into the expertise of our new distribution colleagues in Munich and jointly offer our know-how on a global level.”

About the Media Box

Media Carrier’s e-paper library is a prime service offering for mainly clients in the tourism industry: The „Software as a Service” (SaaS) offering can be integrated anywhere in the world. It is an ideal product for customer-focused service companies, wanting to provide their customers and guests with a special and clever “on the go” service and current high-quality newspapers and magazines. The web-based Media Box can be used on any web-enabled device, no matter if Apple or Android, tablet or notebook. Users neither need to install an app nor register and provide personal data. They simply connect to local Wi-Fi and are then automatically (or via a landing page) taken to the Media Box where they can access about 1,000 top newspapers and magazines for download.

Media Carrier GmbH was established in 2011 as a subsidiary of the Munich-based MELO Group, whose central divisions are built on the two pillars media and logistics. The company specialises in the marketing and distribution of digital content. Through its digital media library Media Box, it supplies the travel industry with e-papers. Customers include more than 1,200 hotels worldwide, including major chains, e.g. Crowne Plaza, Hyatt, Radisson Blu, Intercontinental, Intercity, Mandarin Oriental or Sofitel, as well as leading airlines, such as the Lufthansa Group (Lufthansa, Austrian Airlines, SWISS, Eurowings, Air Dolomiti) or Virgin Atlantic. Over 1,500 Media Boxes are currently in use, in more than 35 countries.

Headquartered in Dubai, Todaily is the market leader for print media and media services in the Gulf region. The company was founded in 2003 and is one of the oldest media service providers for the aviation and hotel industry. With branches in Abu Dhabi, Bahrain and Qatar, Todaily supplies newspapers and magazines to all major airlines in the region and specialises in managing the entire media requirement of its clients.