As aircraft seat width and pitch are continuously cut in bids for greater cabin density, and materials and structures grow thinner to keep weight down, there’s not much room – literally and figuratively – for innovation in the last cabin.

Making the best of what they have to play with, however, are Cathay Pacific, Singapore Airlines, and Etihad Airways. All three have worked with seat manufacturers to improve economy class headrests, an easily overlooked detail that may now represent one of the final hopes for improved comfort at the back of the plane.

Flying since 2014 and first appearing on the airline’s Airbus A380s and Boeing 787-9s, the “economy smart seat” was designed by the Etihad Design Consortium and produced by Zodiac Aerospace. It includes a headrest with a single fixed wing, encouraging passengers to lean into it and relax for sleep while still sitting upright.

After the launch of the seat, Etihad noted to AirlineTrends that the headrest design came about after focus groups and passenger feedback emphasized greater need for privacy and rest during sleep, and “…that the flexible ears you find on most existing economy seats never provide enough support.”

The fixed wing has the added benefit of somewhat blocking the peripheral vision of the passenger, minimizing awkward eye contact with the passenger in the next seat. If this simply isn’t enough, in June Etihad announced it would enable the ability for economy class travelers to book “neighbor-free” seats, meaning reserving more than one seat in a bid to guarantee having a row to themselves. 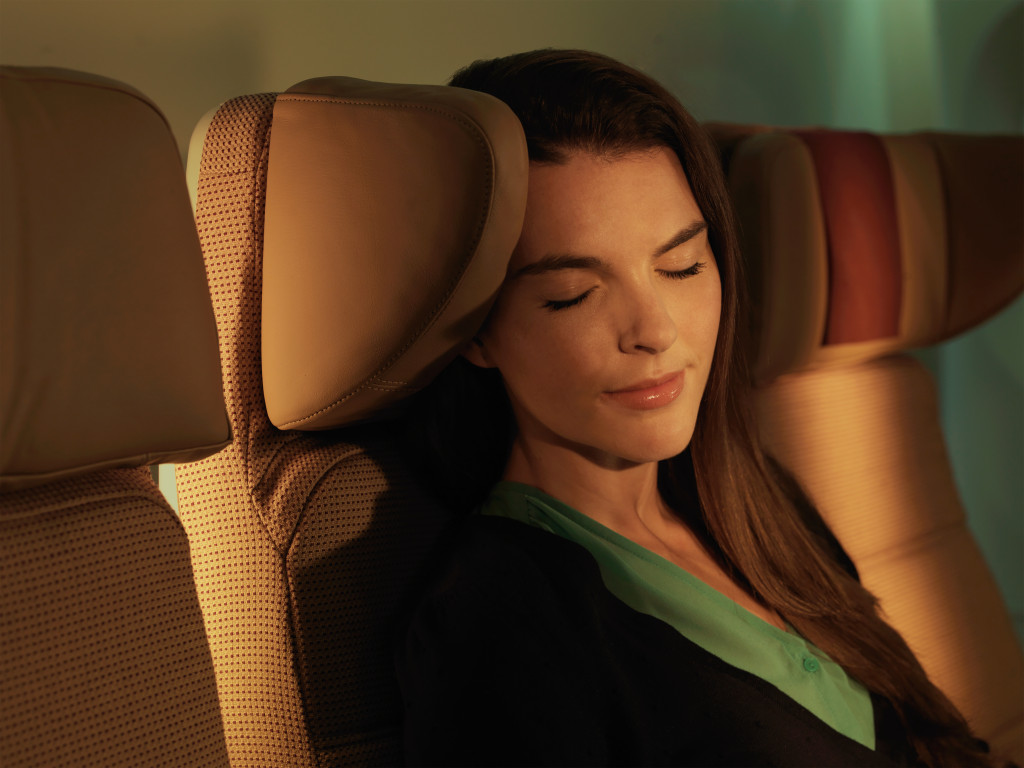 Cathay Pacific became the first airline to implement a hammock-style headrest in May 2016, with the arrival of the airline’s first Airbus A350-900 XWB and a refreshed economy cabin.

Designed by Tangerine, known best for developing the “yin-yang” seating in the British Airways’ Club World cabin, the partnership with Cathay aimed to channel “Asian minimalist tradition” for the A350 interior.

The headrest was an unexpected gift for passengers, and its six-way functionality unique in aviation. We noted that the new ability to not only shift the headrest up and down and fold its wings in and out, but to also fold out the wings and rest inside a hammock support, was revolutionary.

We dared to dream, positing that “perhaps the six-way headrest is ushering in the dawn of a new era – one where travelers can leave ugly, bulky neck pillows at home and trust in the comfort of an airline seat.”

Travelling shouldn’t be a pain in the neck. Enjoy personalised comfort with our new Economy Class 6-way headrest. #A350 #lifewelltravelled pic.twitter.com/jTfcvqccYs

The newest entry in the parade of updated headrests is found on Singapore Airlines’ fresh-from-Toulouse Airbus A380 as of this month. We’re speaking of the airline’s first superjumbo to be outfitted with the updated Suites and Business Class, the seats which have without a doubt hogged the headlines.

The airline’s official site touting the designs briefly mention the economy headrests, saying: “[There are] ergonomically designed backrests contours. Adjustable footrests with three separate positions. Even a six-way headrest for the perfect neck support. Upright or reclined, you’ll definitely get there in greater comfort.”

As the first aircraft with this fresh interior only just began flying between Singapore and Sydney, few reviews of the seats have been shared. The best look at the updated headrests, which Singapore Airlines also calls “six-way adjustable”, comes from blogger Sam Chui, in his video tour.

The full video is worth a watch, but check out when Chui sits down and allows the cabin attendant to explain the movements.

The headrest shifts up and down, the wings fold in and out, and, notably, it is able to angle outward from the bottom to better support the neck while resting in an upright position. It’s a simple improvement, but an improvement nonetheless.