Passengers don’t generally see the cables used inside aircraft seats or those hidden in the cabin to connect inflight entertainment systems together and transmit data. But in order to ensure these digital cables can withstand a certain amount of abrasion to meet regulatory requirements, a protective, braided sleeve – made of Kevlar or Nomex and affectionately called the ‘green sock’ – is used for the outermost layer. Now one of the larger OEMs wants to reduce the weight and expense associated with the sock.

It has long been a challenge for the industry to produce a jacket system that can provide enough abrasion protection to ensure cables can be installed by themselves, according to W. L. Gore & Associates, which says it has developed – with its material sets – a composite cable that can exceed some new standards.

“When abrasion testing something, you take a cable and you have a calibrated pin and you apply a certain amount of force from that pin and it runs in a linear manner backwards and forwards for a certain amount of cycles with the idea being that it will rub through your cable jacket into the cable,” explains Gore global product manager – civil air cabling and aircraft connectivity products, Adrian Milne.

Milne says Gore’s latest cable on two of its test runs have completed over 7,000 cycles at one temperature and another at over 13,000 cycles. “So we believe this will be a game changer for in-seat type cable systems and we are just saying that we have this technology out there. It’s early days. As in we – you know it is not a fully launched product but we are getting the word out.” 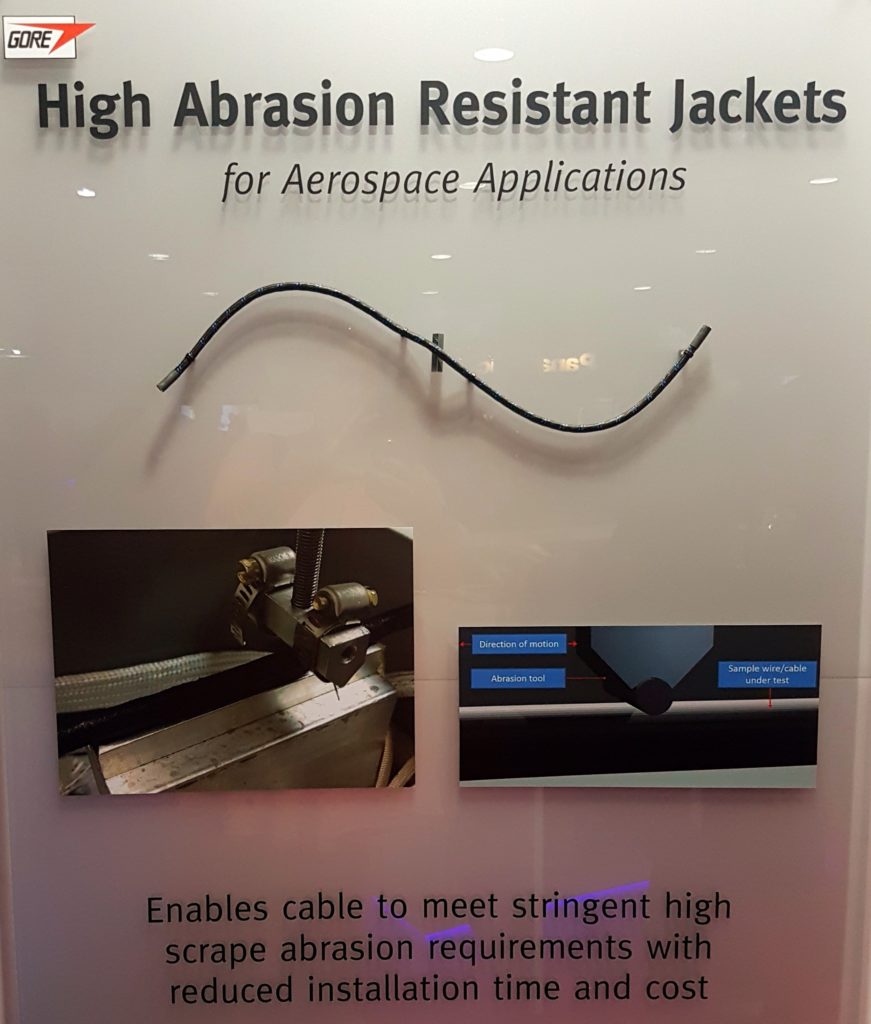 Does Gore talk to the aircraft seatmakers or the IFE manufacturers about this new product? The former holds the technical standard order (TSO) for the integrated IFE-seats commonly found on most commercial widebody aircraft and some narrowbodies.

Milne notes that, under the current paradigm, the IFE company “provides the equipment to the seat company and the seat company has to have the approval on it. So the seat company needs to make it work but they don’t decide what the cables are, and the IFE company doesn’t need the certification” so they’re less incentivized to take the steer. Rather, Gore is seeing pressure from some of the OEMs, “which are saying, ‘well we are going to change spec’, so it will flow down into the industry and these changes will need to happen. Whether it’s a Gore solution or something else [it will happen] over time.”

He adds, “Things are being grandfathered a little bit in some systems but over time these things will have to change.” That is because most jackets are extruded over the top of most cables “and it’s very good material but from what we have seen it doesn’t comply within these [new] specifications and that isn’t a Gore thing. I mean a Gore cable won’t pass and we don’t believe anyone else’s [will].

“Material is material; we don’t magic anything from it but using these new composite cable jacket systems available, [which we] are working on, we can as I said meet and exceed those specifications. So we are pretty excited …”

In addition to conducting a lot of internal testing, Gore uses external certified labs for its testing. “We have a third party,” says Milne. He says Gore has the data to show it can hit the aforementioned cycle numbers.