Standing head and shoulders above the crowd in support for marriage equality for Australia’s LGBTQIA citizens is Qantas’ chief executive officer Alan Joyce. Joyce — who himself is gay, and remains to RGN’s knowledge the only airline CEO who is open about being a member of the LGBTQIA community — has long supported marriage equality, even in the face of being attacked both verbally and physically. Qantas, too, is a longtime supporter of queer communities and issues, including as a long-time participant in Sydney’s Mardi Gras, one of the world’s largest pride events, featuring an aircraft with a rainbow-painted logo to mark this year’s event.

It may not be too much of a surprise to see airlines supporting the LGBTQIA community, but Joyce spoke extensively about his own and his airline’s position at the airline’s annual financial results event. It is both notable and praiseworthy that a CEO has the courage and the support of his management team, staff and board of directors to support equality. Indeed, Joyce noted, “I’m very proud of the fact that I’m an Australian citizen. I’m very proud of this amazing meritocracy. Where else in the world would an openly gay Irish man become the CEO of one of the biggest brands – if not the most iconic brand – it’s phenomenal.”

In context, Australia is in the middle of campaigning on a non-binding postal plebiscite on marriage equality, which many Australians – including Joyce – see as a dereliction of its parliamentarians’ responsibility to move Australia into line with almost every comparable society and accept the equality of same-gender relationships. The arguments against are the usual and seemingly unchanged series of anti-gay messages from the usual and seemingly unchangeable sources.

“Unfortunately,” Joyce said of Australian society, “I think, due to leadership in the past and today, we’ve fallen behind on progressive issues. We’re the second country in the world to give women the vote. Twenty two countries have gone ahead of us on marriage equality. I’m disappointed at that, but that doesn’t represent the Australia I know. The sooner the better we can get this passed, so that we send a message to the rest of the world how amazing the country and how progressive this country is.” 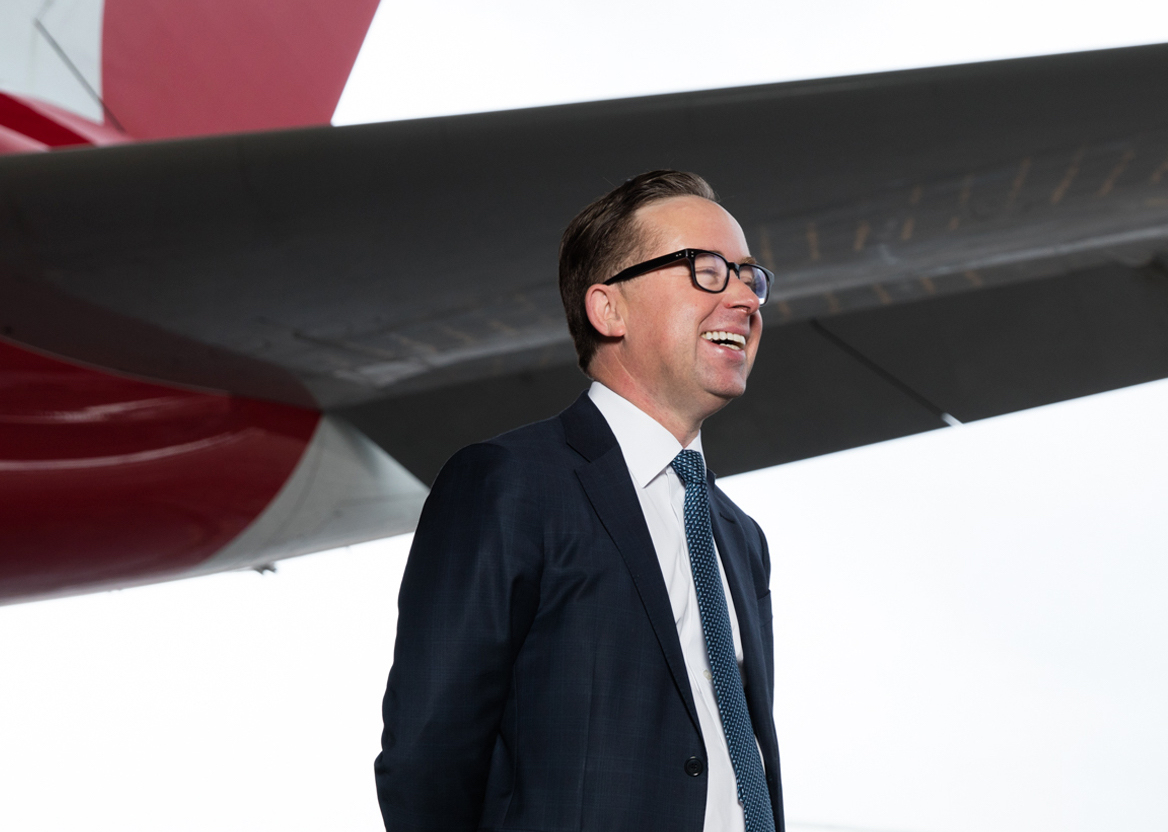 Alan Joyce and his airline are leaders among Australian businesses pushing for equality. Image: Qantas

Many other Australians, particularly those who support LGBTQIA rights, are disappointed to have been proven correct in their expectation of homophobic and abusive campaign materials and arguments being displayed or broadcast. Joyce himself was attacked at a news conference by a man who used, fortunately in this instance, a pie rather than a weapon.

“Obviously,” Joyce said when discussing the plebiscite, where a yes vote is for marriage equality, “personally, I am very passionate about that. I will be doing everything I can to support a yes vote. I have to say that I am personally disappointed it’s gone to a postal vote plebiscite survey. I think this should have been decided in Parliament. We shouldn’t get to a stage where $122 million is spent on this. If it does – if the High Court does say it goes ahead, then we will get fully behind it.”

But it’s not just because Joyce is himself gay. “I think if you’re in any form of leadership in this country – leading companies, leading any organisations, have any role to play – I think companies and business leaders should be out there on social issues,” Joyce explained.

“It was interesting when Richard Branson was down here. I think he was hammering Qantas on everything under the sun and telling [people] how unfair we were. But one thing he didn’t hammer us on was the support of marriage equality. He said he’s been doing it for a long time. He’s been out there on those issues, so this is very strong from a lot of business leaders out there,” Joyce concluded. 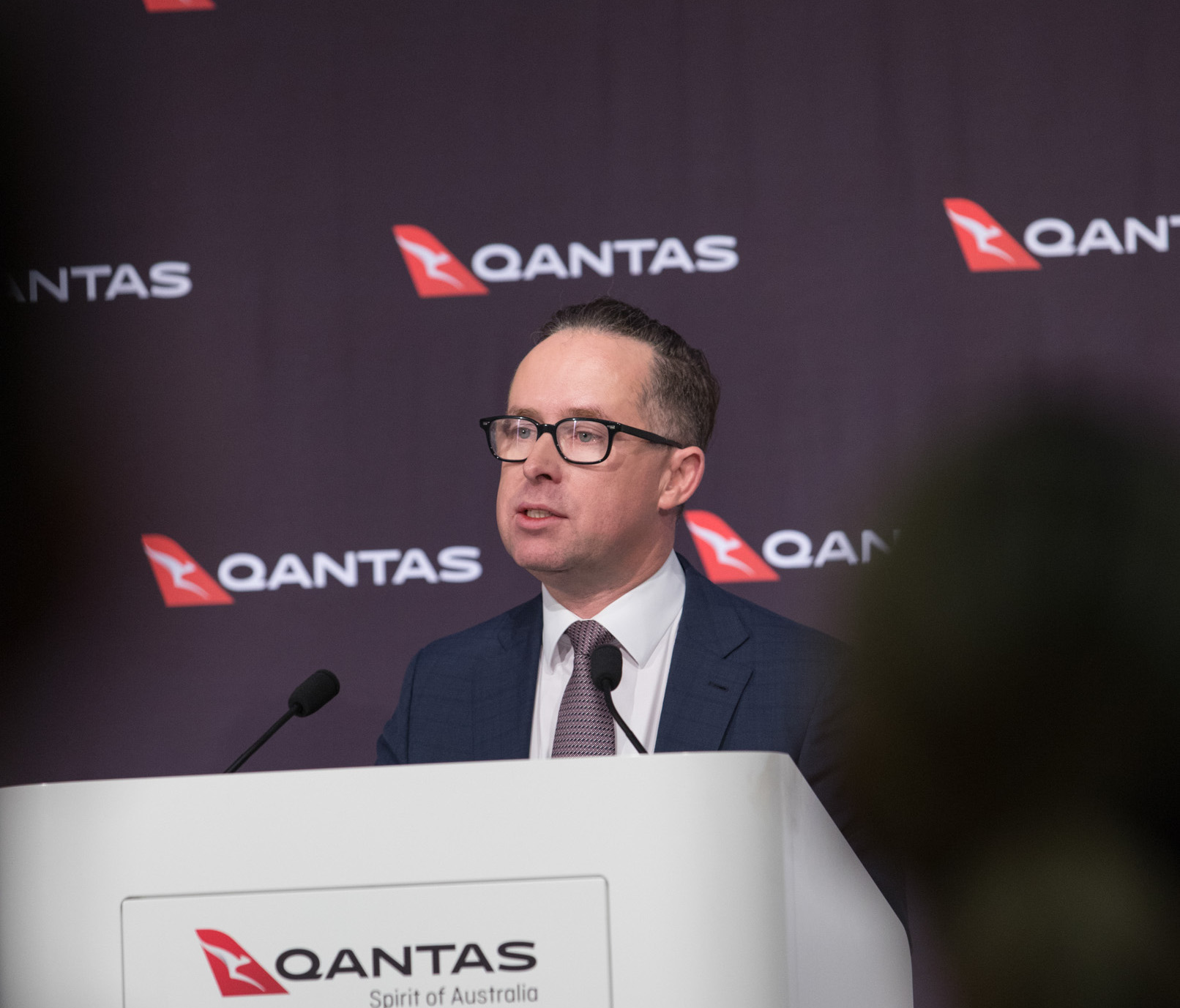 Equality is, at the end of the day, good for business. Image: Qantas

Qantas’ leadership has not been without criticism, however. “Of course, we’ve had people that said we shouldn’t comment on it,” Joyce said.” We’ve had people that said it’s inappropriate. We are vocal on gender equality issues, Indigenous issues and on LGBTI issues. That’s what good businesses do. They’re part of society. They help promote societal changes. They help promote what’s good for our people. That’s what Qantas does. That’s what I do personally, and I think it’s important for other people to speak up on it.”