Can you regulate aircraft seat size based on passenger comfort? For years, lawmakers have tried and failed to do just that. But the latest bi-partisan effort, the SEAT Act of 2017 – which focuses on passenger health and safety instead of comfort – could see fresh momentum if the FAA is unable to adequately justify its conclusion that seat spacing does not impact the safety or speed of passenger evacuations.

The FAA is in the proverbial hot seat to deliver such justification after submitting “(at best) off-point studies and undisclosed tests using unknown parameters” when it denied Flyers Rights’ petition to establish rules governing size limitations for aircraft seats, according to a 28 July federal appeals court ruling.

Specifically, the three-judge panel of the DC Circuit agreed with the consumer group on the point that the FAA “failed to provide a plausible evidentiary basis for concluding that decreased seat sizes combined with increased passenger sizes have no effect on emergency egress”.

Runway Girl Network is privy to the types of responses the FAA delivers when queried about whether high-density seating configurations on board aircraft can negatively impact egress of passengers. In a March 2015 exchange with the agency, RGN asked if the FAA had begun any fresh research into passenger egress in the event of an emergency in light of the fact that we’re seeing very cramped seating conditions on aircraft (with seats being pitched much closer together, seats being added to rows, and aisles narrowed to accommodate the additional seats).

The FAA responded: “If the number of seats increases beyond what the airplane was originally certificated for, evacuation capability must be shown by demonstration or analysis. Minimum passenger aisle width is regulated by 14 CFR 25.815. Access to emergency exits is in 25.813. The number of passenger seats allowed is basically according to number and types of exits, 25.807(g).”

RGN also asked the FAA if any studies were underway in light of the fact that passengers are now charging their devices in the seatback; i.e., do the cords create a fresh tripping hazard or egress concern? “Operators may require that small devices not be plugged in during critical phases of flight (taxi, take-off, landing) even though they can be used. This is not regulated and has not been studied,” the FAA said at the time.

Eight months later, the FAA showed some indication that it was paying closer attention to seat width and seat pitch as they pertain to aircraft evacuations. The Wall Street Journal in November 2015 reported that the FAA’s Civil Aerospace Medical Institute (CAMI) was seeking funding to study seating density in the ensuing three years, and CAMI’s then senior human factors research specialist, Cynthia McLean, was quoted in the report as saying,

“It’s something we have to kind of step back and see what the effect is. There might be an effect. We don’t know.”

When the WSJ story hit, your author reached out to the FAA again, and sought colour on how evacuation testing could be approached by CAMI. “The last real life evacuation test (to our knowledge) was for the A380 (Airbus used employees and gym members). Does the FAA see a role for real-life testing of ultra-high density configs (versus simulation), and would certain measures be put in place to ensure that such tests are conducted with people who are representative of the general populace (inclusive of passengers of size, the elderly and reduced mobility)? In short, what are the next steps,” I asked.

The questions are reasonable. After all, safety regulators have been accepting computer simulation test data to re-certify aircraft to carry more seats. This means that evacuation tests involving real people are not necessarily required. To wit, when Airbus sought to recertify the A320 to accommodate 15 more seats, the airframer explained: “We believe we can demonstrate the evacuation capacity by analysis based on the tests already conducted to justify the increased credit and also tests results from the original A320 evacuation test. This is the typical approach and means that a new demonstration is not required.” And indeed Airbus was right.

It’s also true that some individuals at the FAA see closely-pitched seats as being safer in the event of certain types of survivable accidents because the passenger’s head will impact the seatback sooner, reducing their lunge forward. And the latest generation of lightweight slimline seats are seen as being particularly well-suited for this purpose. Whether the FAA will attempt to make the broader argument that tighter seating can facilitate evacuation based on the post-crash condition of passengers remains to be seen. 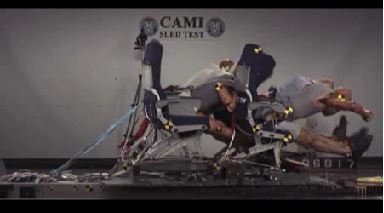 The obvious question now is – did CAMI complete the tests it discussed with The Wall Street Journal in 2015, and if so, what do the data show?

RGN posed this question to the FAA after the DC Circuit made its ruling. A spokesman for the agency today stated that the FAA is not saying anything beyond the following statement: “The FAA does consider seat pitch in testing and assessing the safe evacuation of commercial, passenger aircraft. We are studying the ruling carefully and any potential actions we may take to address the Court’s findings.”

Bloomberg reports that the FAA, in a statement last May, said it had already conducted evacuation tests on the smaller seat configurations to ensure they are safe. But in an opinion filed on Friday on behalf of the appeals court, US Circuit Judge Patricia Millett noted that the FAA was not forthcoming with it about its test data. The agency “admits it relied materially on information it has not disclosed, and the Administration has pointed this court to that information as a basis for affirmance. Having invited the court into its record, the Administration cannot hide the evidentiary ball.”

In short, when an agency denies a petition for rulemaking, the record can be slim, but it cannot be vacuous. Especially so when, as here, the petition identifies an important issue that falls smack-dab within the agency’s regulatory ambit. While we do not require much of the agency at this juncture, we do require something. And information critically relied upon by the agency that no one can see does not count. We accordingly remand to the Administration to adequately address the petition and the emergency egress concerns it raises. If the petition for rulemaking is again denied, the Administration must provide appropriate record support for its decision.

Meanwhile, the SEAT Act (Seat Egress in Air Travel Act) tabled by lawmakers earlier this year seeks to establish minimum standards for passengers “including the size, width and pitch of seats, the amount of legroom and the width of aisle on such aircraft for the safety and health of passengers”.

“Shrinking seat sizes in airplanes isn’t just a matter of comfort but the safety and health of passengers as well. Planes need to be capable of rapid evacuation in case of emergency,” said Congressman Steve Cohen when he announced the bill with co-sponsors in March. But the bill does not prescribe a means for determining what those sizes should be.

The onus is on the FAA to prove that lawmakers, consumer groups and passengers have nothing to worry about. And if it’s simply sitting on the data, that should not pose a problem.

RGN discussed the issue of passenger egress in the face of the seat crunch on a recent episode of #PaxEx TV (see below), and on this week’s Airplane Geeks podcast.

Is British Airways’ First Wing just lipstick on a horselamp?