More space. Larger overhead bins. Greater comfort. These are all aircraft cabin features that Airbus continues to tout, most recently through the launch of the Airspace cabin interior concept just last week. And yet, despite all the talk, the 11-abreast A380 layout is once again up for discussion and Airbus is pushing it, arguably more than ever, in a presentation given to investors on the very same day that Airspace was unveiled. The outlook for coach (and even some premium) customers will have dimmed a bit, if airlines warm to these ideas.

It is no secret that the A380 has stagnated in the market of late. Airbus is working hard to expand the order book for the super jumbo and it continues to explore ways to improve space utilization on board; more seats means better margins and the airframer knows that it must convince airline customers of even better economics to sell the type. A re-engined “neo” model seems unlikely as does a stretch configuration and so the company is looking for ways to make the existing space “more efficient” and more profitable.

In an investor presentation released last week the company highlighted many “cabin enablers” to help boost the revenue potential for the type. And, while some of them are truly neutral to the customer, the majority are almost certainly downgrades to the passenger experience (#PaxEx). 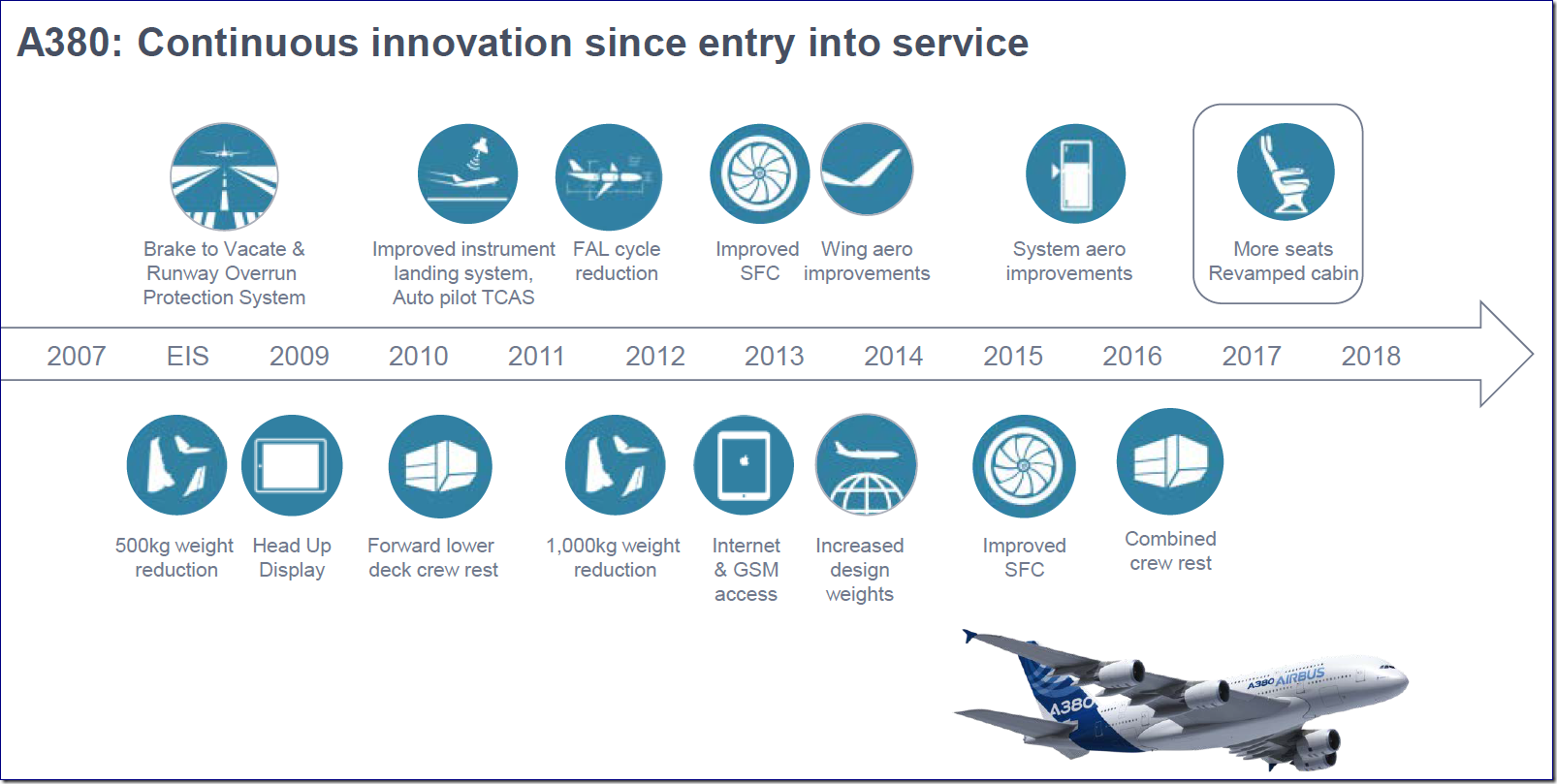 How to make the A380 more profitable? Put a squeeze on passengers. Graphic: Airbus investor presentation

It was almost exactly one year ago that Airbus presented the A380 11-abreast mockup at the Aircraft Interiors Expo in Hamburg. That went over about as poorly as one would expect, particularly considering the way in which an 18″ seat width was promised – by narrowing the armrests to increase the measurement while not actually adding more personal space. Airbus is not the only firm making that play, which is unfortunate for all passengers, but in the case of the A380 it is especially unfortunate as it creates an incredibly dense layout with more middle seats – who wants the middle seat of a 3-5-3 configuration? – and also significantly reduced comfort at the windows. At that time, the concept was presented as just an option, something an aircraft lessor or two might be interested in. Today it appears to be key to the company’s drive to convince airlines that the A380 is a profit machine. 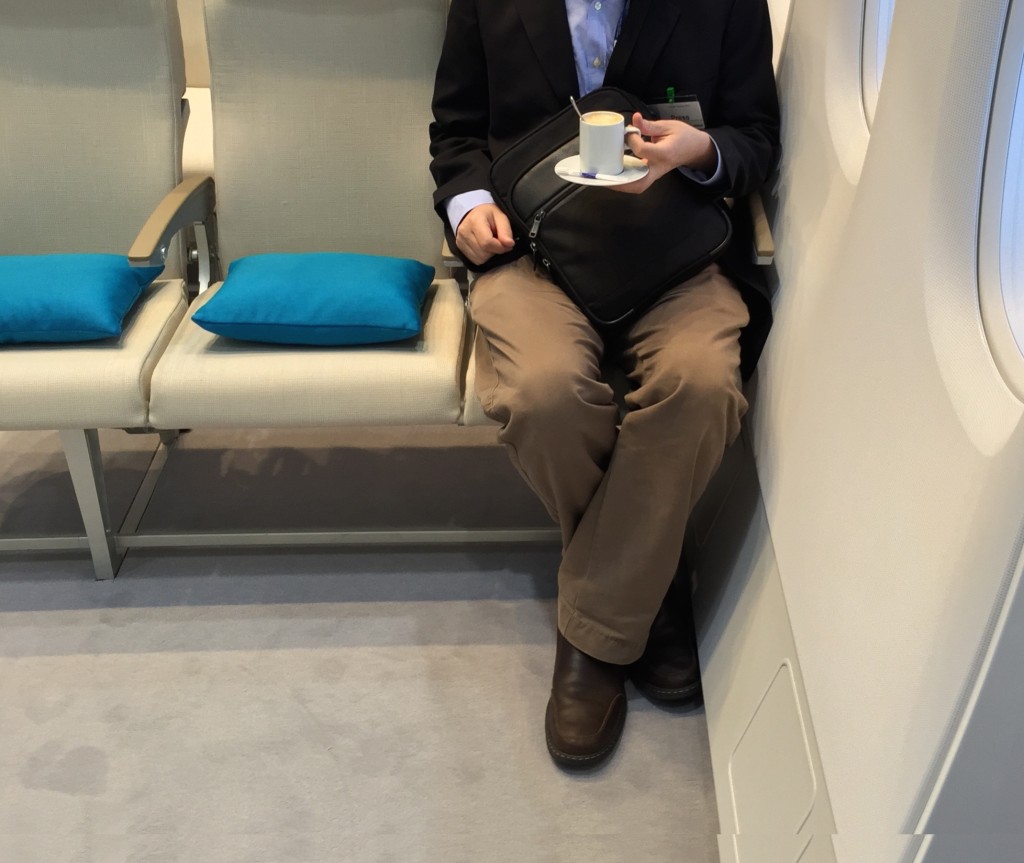 Narrower armrests and limited space for window seat passengers are just two of the challenges the A380 11-abreast layout presented in the iteration shown last year. Image: John Walton

As for the rest of the aircraft, things don’t get much better in the premium cabins, either. Airbus is suggesting that some of the other benefits the type offers be removed or reduced to further increase density. On the upper deck, sidewall bins exist today because the sidewall curves in too much to comfortably move the seats closer to the wall. The airframer’s marketing slides call for removing that storage to increase revenue.

Similarly, the company is calling for an increased density in the Premium Economy cabin, at least on the main deck. Currently Lufthansa and Singapore Airlines offer such, both in a 2-4-2 layout. Airbus’ new marketing effort calls for a 3-3-3 arrangement instead. Other airlines offer Premium Economy on the upper deck in a 2-3-2 layout; Airbus does not seem keen to change that, other than suggesting it move downstairs where greater density can be achieved.

There are some ways in which the “cabin enablers” are arguably passenger neutral. A combined crew rest compartment should not adversely affect passengers. And the alternative stair-galley module (currently in development, not actually offerable yet) should mostly be neutral, though it does raise questions about overall galley space and levels of passenger comfort vis-a-vis catering and room to move during the longhaul flights the A380 is built to serve. The Space-Flex galley was also supposed to be passenger-neutral and that has not proven to be the case in reality.

I’ve flown on the A380 with five different airlines, sampling both economy and premium products. I’ve enjoyed each of those flights immensely. But a significant portion of that enjoyment came from the fact that the offering was comfortable, even as 400-500 other people were on the plane with me. I’ve walked through the Emirates two-class A380 with 600+ seats on board and I believe it to be a surprisingly comfortable layout. Going 11-abreast on the main deck and potentially tighter upstairs as well would almost certainly break down that comfort factor. 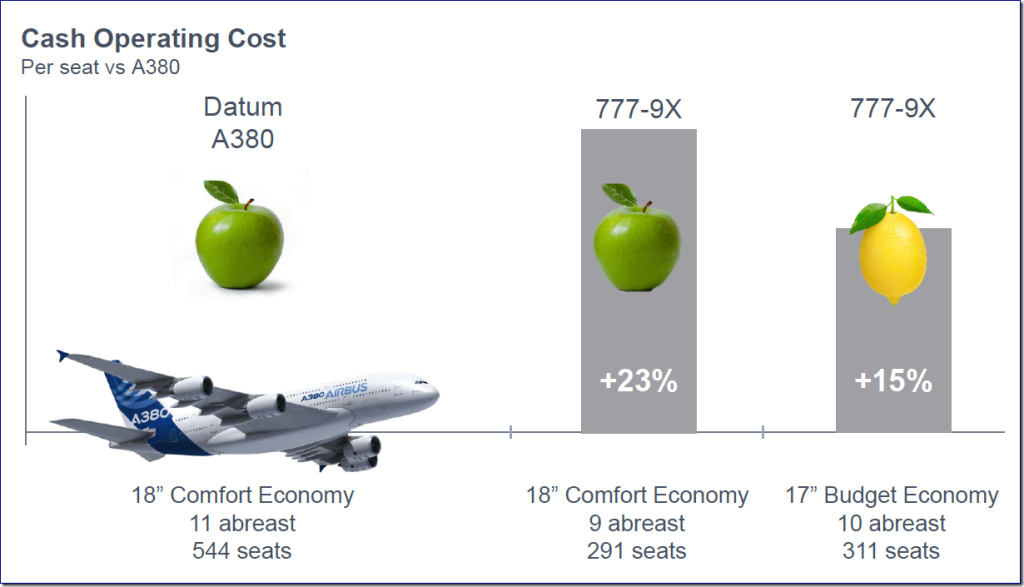 It is the airlines, of course, which ultimately make the choice; not the airframer. And carriers are constantly looking for ways to shave costs and increase revenues. That’s what a good business does. But if they’re not careful they’ll ultimately ruin the goodwill and positive impression the A380 has created in the industry. Passengers love flying the type, according to Airbus data and feedback on social media. But they love it in the current layouts, not one squeezing 10% more seats on board. Airlines must be very careful on that front as to not destroy the well-earned reputation the type has today.

Canadian upstart NewLeaf gets the green-light to operate