Over the past three years, Pitch has seen over 2,500 of its seats flying on Monarch Airlines’ A321s in a 214-passenger configuration. This launch product, known as the PF2000, featured a fixed back with an optimized permanent recline angle. “The first PF2000 installation reduced the A321 aircraft weight by 795 kg, with subsequent seats reducing the weight by over 1,200 kgs per shipset,” says Dickey.

The seatmaker’s current plans include the new PF3000 slimline, PR3000 fully featured economy seat (the R is for the recline, which isn’t available on the pre-reclined slimline), and the PF27 variant of the PF3000 slimline that will enable airlines to select a 27” pitch.

The new line will build on the benefits of the current PF2000 model, Dickey explains, which include up to 3 inches additional leg room at a 28″ pitch setting, a shaped front cushion front edge to aid in access for passengers, weight under 9.3 kg per passenger place fully loaded including synthetic seat covers, plus a “cantilever tray table for reduced parts count and to remove the annoyance of tray table arms against the knee”.

The original PF2000 also features a “bungee lower literature pocket for ease of cleaning” with “no need to inspect between flights… a low-cost literature pocket.” And with the PF2000, the company introduced what it refers to as Airline Managed Inventory, with the airline holding spare inventory, with twenty-four hour access and drawdown as required. The inventory is transferred to the airline at the end of the warranty period.

The evolution from the PF2000 to the PF3000 is around improvements in design and ergonomics. “Pitch incorporated the core values and features of the PF2000 and made them better, offering “more space and enhanced functionality by reshaping the PF3000 seatback and an upper and lower literature pocket (A4) as basic fit. A new patented upper literature pocket design allows airlines to present full A4 portrait storage for inflight magazines,” and is “designed to look good even if the magazines become ‘dog eared’ over time. The reality of most cabin interiors when the literature has seen a few flights can be fairly messy, and we wanted to present a fresh cabin every time.”

Getting the knee zone clear for personal space is key for a slimline. Image: Pitch

In-seat power is also an option on the PF3000, with a USB socket behind the tray table. If the table is up, the power can’t be used, reducing takeoff and landing compliance check burdens on the crew, but slightly reducing amenity given that the table must be down (or at least open) while charging.

A second evolution is that PF3000 can be pitched an extra inch tighter, at 27”. “The PF3000 complies with 27″ to 34″ pitch settings,” Dickey tells RGN. “Pitch uses an ATD Dummy 50th Percentile dummy for the Dynamic and HIC Tests. The HIC test covers the 5th (Female) to the 95th (Male) percentile. Pitch also conducts additional testing with passengers we have access to who are extra short or extra tall to ensure the level of comfort is maintained. In the PF3000 we have further adjusted the H Point of the seat to accommodate the smaller passengers.”

Specifically, Dickey says, Pitch has  “optimised the comfort sections in the lower back seatback” for lumbar support, shaped cushions for maximum comfort, and designed the tray table’s lower corner to add legroom for taller passengers (and to meet certification requirements). The armrests on the seat fit flush behind the seatback in order to speed up entry and exit and improve access for larger passengers. 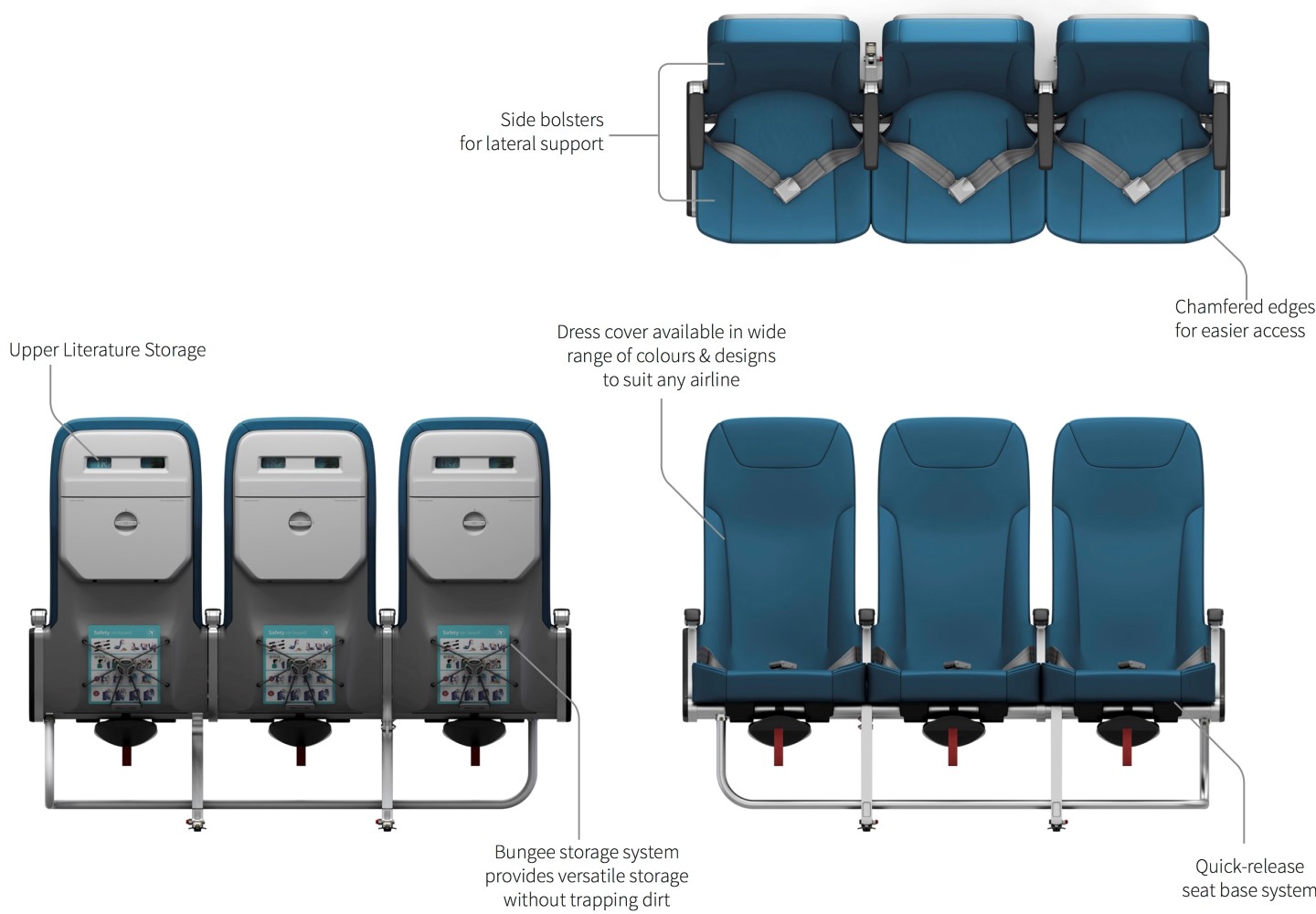 PF3000 adds functionality and improves the ergonomics of the seat. Image: Pitch

“The PF3000 has completed indicative testing for 16G dynamic, head injury criterion, 14G lumbar and static testing and is now scheduled for formal testing using off-tooled parts staring April 3rd,” he adds. “In parallel with the formal certification testing Pitch will be carrying out a program of abuse testing to ensure we achieve a good in-service performance. This testing is conducted by SWS in Wales on behalf of Pitch.” 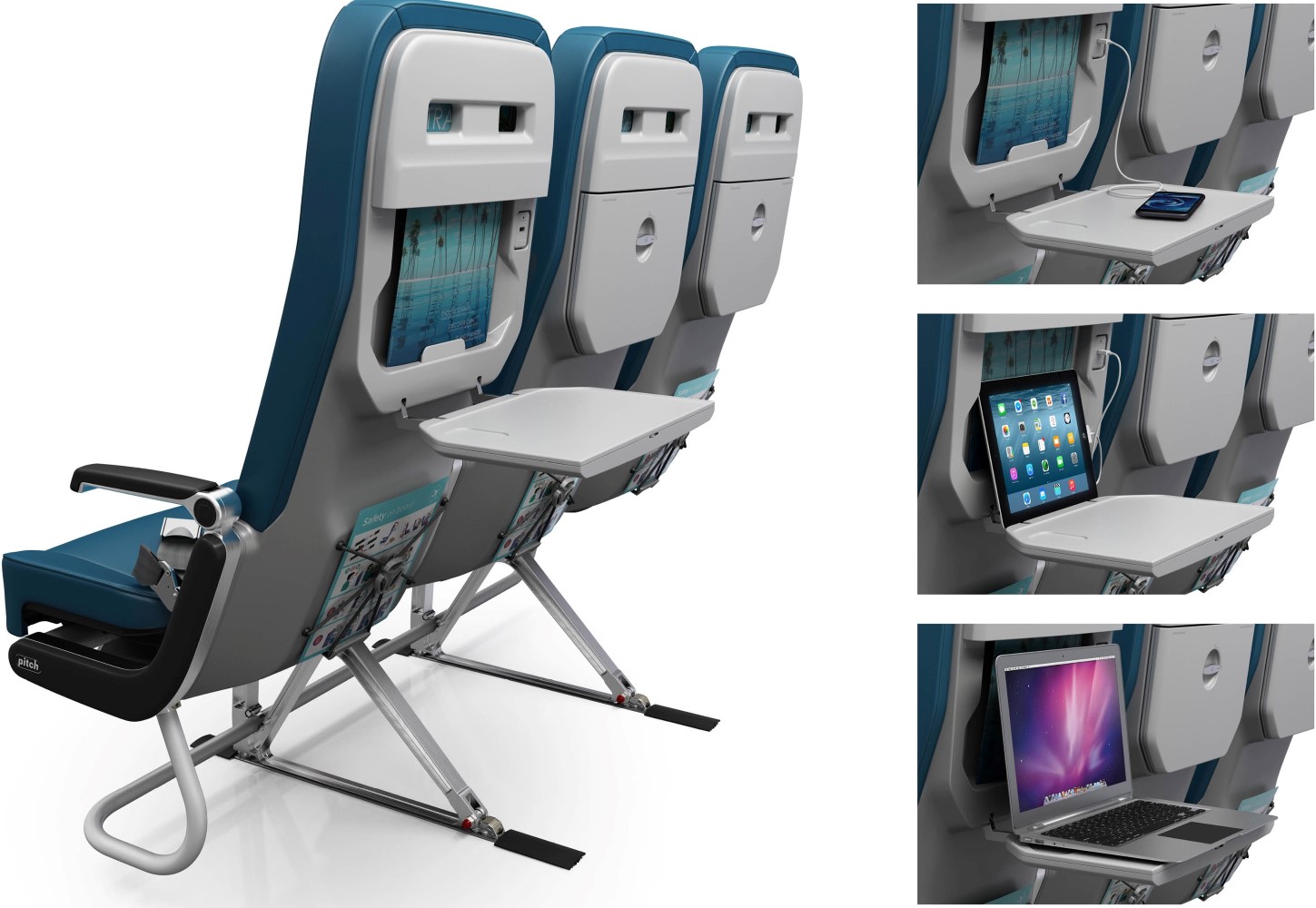 Many passengers would prefer a barebones slimline to a hybrid seat at the same pitch, when it comes down to it. Image: Pitch

But alongside the PF3000 and PF27 offerings Pitch is also going fully featured with its PR3000 model, due to launch in the second quarter of 2018 and targeting the Airbus A330 and Boeing 777 fleets, as well as full-service carriers’ single-aisle fleets. PR3000 will feature recline and can accommodate inflight entertainment systems.

With ongoing concern about the reliability of the cabin interiors pipeline, the twelve-week lead-time for an approved LOPA that Pitch can offer is a further check in the “pro” column as airlines — especially those with smaller fleets and innovative interiors teams — consider their next seat move.