At one of the busiest stands at the recent Aircraft Interiors Expo, Asia, Molon Labe CEO Hank Scott barely paused between showing airlines, leasing companies and interested #PaxEx industry attendees the Side Slip Seat, newly through its 16G dynamic testing.

“The idea is that we solve a problem: how do you make passengers happier while improving revenues. You’re either doing one or the other. We’re doing both,” Scott says.

The basics of how the side slip concept works: the aisle seat slides over the slightly staggered back centre seat to provide a double-wide aisle to speed up boarding, then slips back into place when the aisle passenger arrives.

When it’s time to disembark, passengers push a single button to slide the aisle seat back over the middle to recreate the super-wide aisle.

The Side Slip Seat, as demonstrated at #AIXA2016. What do you reckon? #PaxEx #APEXEXPO pic.twitter.com/x24UoUXC7l

The essential structure, Scott says, is “two telescoping poles with a third point of contact to reduce the play. Two spars go underneath and they go all the way across.” The seat is engineered so that passengers who sit on the aisle seat while it’s over the middle seat can slide over to the aisle side without having to get up.

Your RGN reporter must admit to having had to take a few goes to figure out the unlocking mechanism to slide the aisle seat over the centre, but that’s something that can be fixed by a few iterations of focus groups around design, signage and so on.

The Side Slip Seat really is a fascinating #PaxEx. Lots of interest at #APEXEXPO. pic.twitter.com/Xsn5VN8nUC

Interestingly, in the A320 size on the stand at AIX Asia, the bottom of each seat is 18”, but the stagger means that the seatback of the centre seat can be 23”. The stagger also means that the centre passenger’s shoulders are offset slightly from the shoulders of the passengers next to them, which provides a greater feeling of space on the same aircraft footprint. 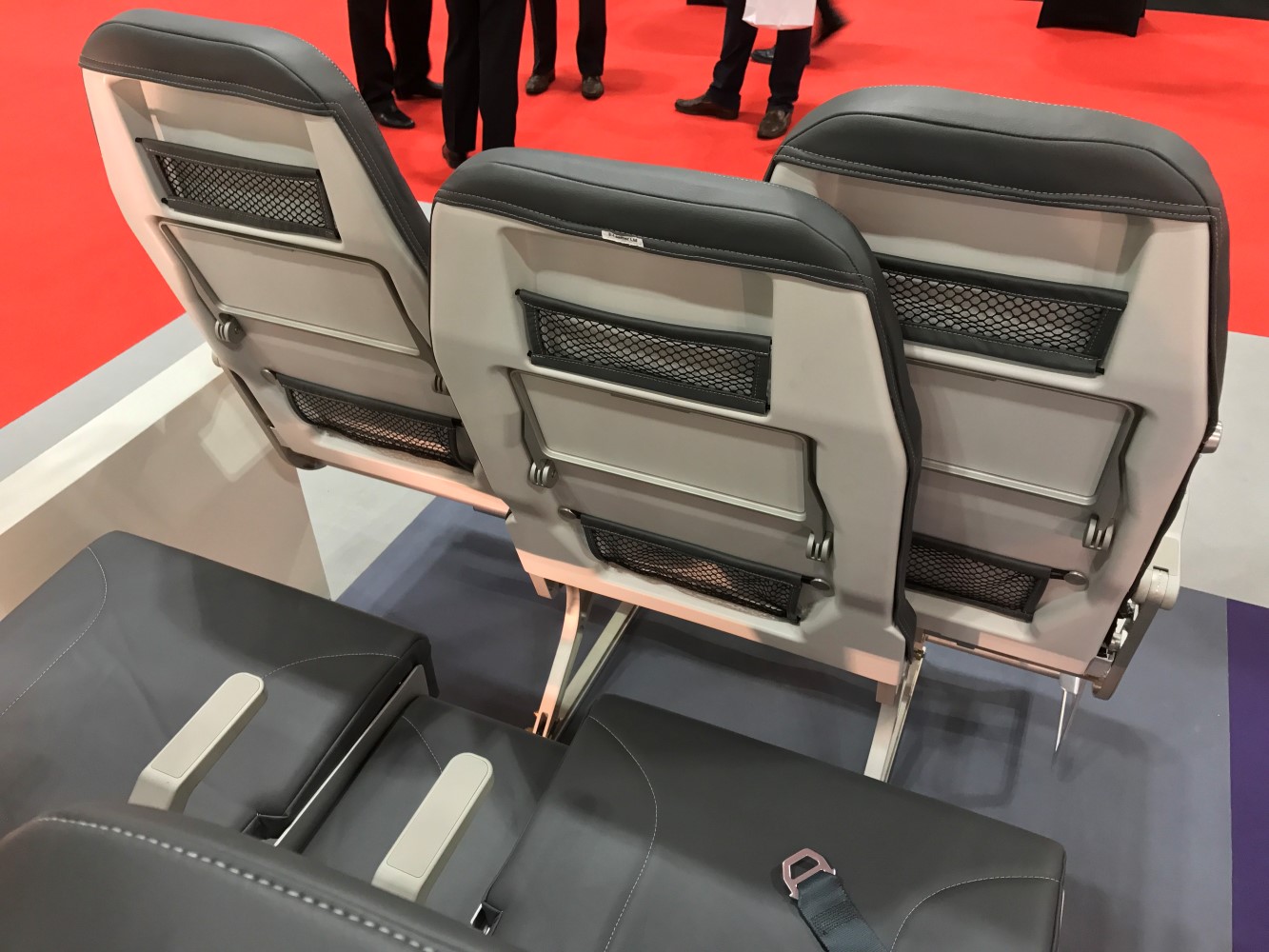 The stagger and wider centre seat backrest goes some way to giving the middle seat a bit of a boost. Image: John Walton

The seat was tested with a standard seatbelt, Scott confirms: “We had all these concerns with what we were going to do, with body stiffeners and everything, but it just never gets caught. We were looking at a retractable for a while, but we didn’t need it.”

The rest of the certification process is expected “in the first quarter of next year, through the standard process.” The seat will be certified with all seats extended, because HIC is too challenging given the impact zone of a slid-over passenger’s head between the two seats in front.

“Lufthansa asked if we would certify it if it slid over, but they were the only ones who ever asked about it,” Scott says. “The idea is that you [could] configure however many business class seats you want per sector.”

In form, the seat demonstrator as shown is barebones, like other slimline seats. Mini-armrest, mini-table, minimal foam, and a bit of netting mean that the non-critical parts of the seat are hard-wearing and easily swapped out. For a seat aimed at reducing turn times on shorthaul aircraft, that’s smart design, but it feels like an opportunity to smarten the seat up à la Mirus or Acro is still outstanding. The key thing is, though, that people are used to barebones seats that look like this now. 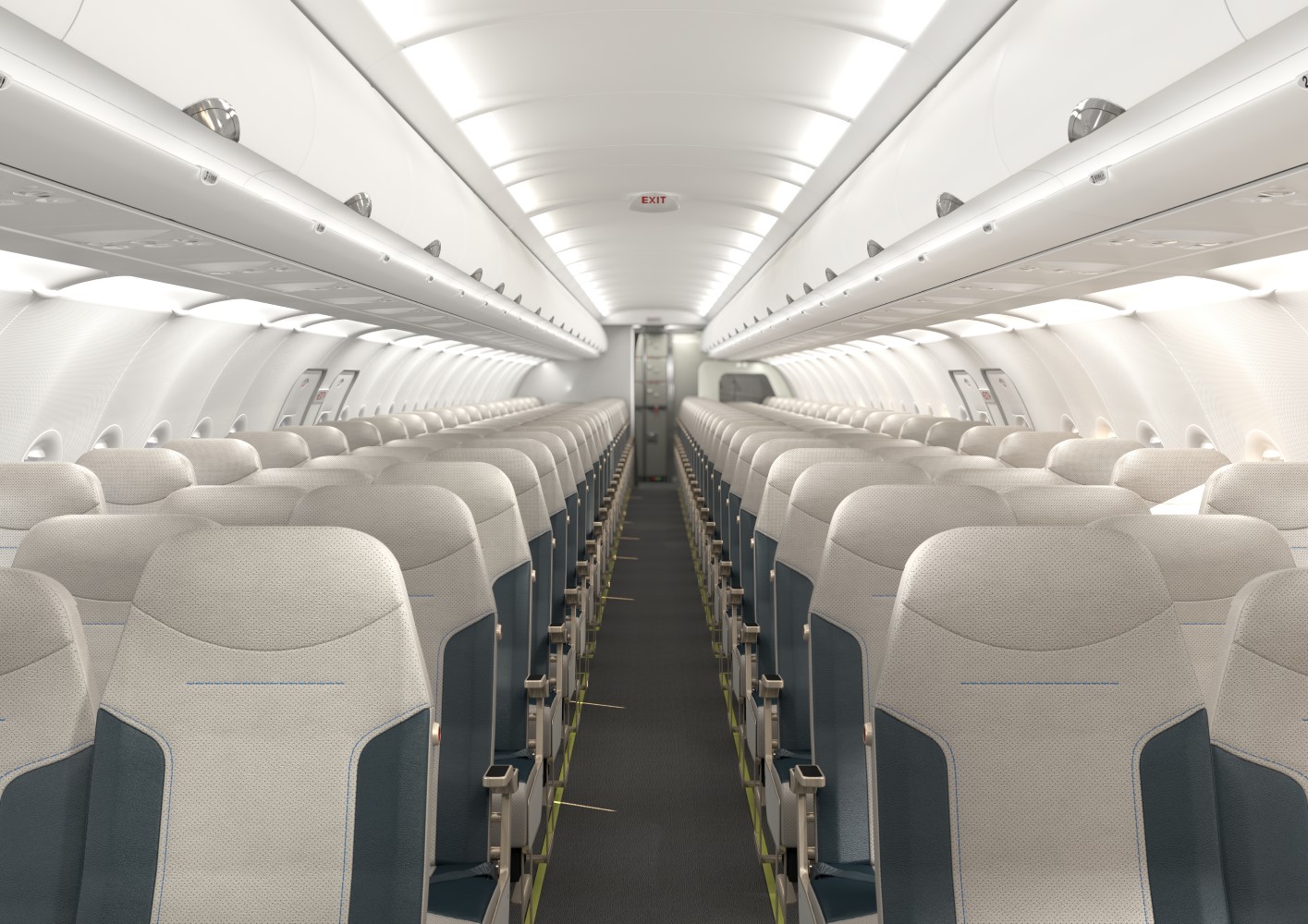 Apart from the slight centre stagger the seats are reminiscent of modern shorthaul slimlines. Image: Side Slip Seat

Scott cited significant interest from leasing companies, highlighting that there is real money to be made if an LCC (Scott cited Nok Air) can increase from seven turns a day to eight.

But it’s not just about efficiency. The double-width aisle is also a huge boon for passengers with reduced mobility. “We’ve been endorsed by a variety of disabled veterans’ organisations, disabled passengers’ associations, rights associations,” Scott says.

Wheelchair users would board while the seats were slid over, doubling the amount of maneouvring space and potentially enabling passengers to board and seat themselves using their own wheelchairs rather than being wheeled in unfamiliar aisle chairs. Since the seats will slide with a passenger already seated, the passenger would seat themselves (with or without assistance) and then the wheelchair would be stowed.

“If you slide the seats in from the back and from the side,” Scott explains, “the assistance you can provide to get someone in the seat, plus the fact that you can put them in the seat then slide them over, and not using a 20-inch wide aisle to manoeuvre that person, you’re using three locations plus a 42-inch wide aisle.” 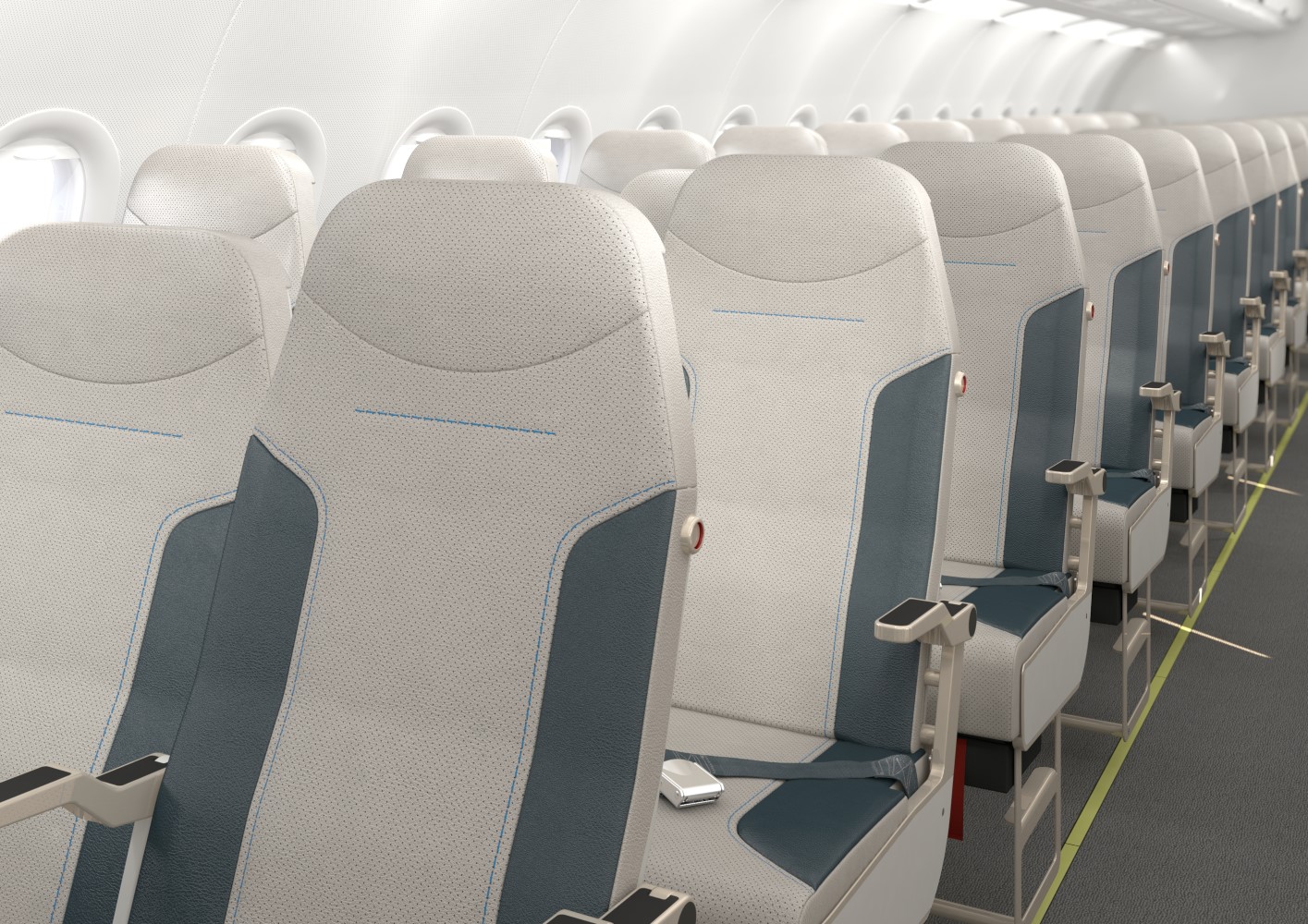 Once passengers arrive they slide the seat out to the full width. Image: Side Slip Seat

Scott cites “a certain Big Three in America” as “very interested in reducing the variability in on-time performance” as a result, particularly on high-PRM routes. Scott paraphrases a discussion with that airline’s CFO as “I’m not going to buy this seat because of the wheelchair access, but if I buy the seat you can be damn sure everyone who has a wheelchair is going to know who is giving you your own wheelchair access to the seat.”

“We’re also now designing a longer haul version,” Scott reveals, “where we will increase the padding, we’ll increase the armrest. We’ll want to sculpt them. It’ll be staggered, but it won’t slide. For longhaul flights you don’t care so much about the turnaround.” The stagger will also increase slightly. “I’d like an inch, maybe even two.” 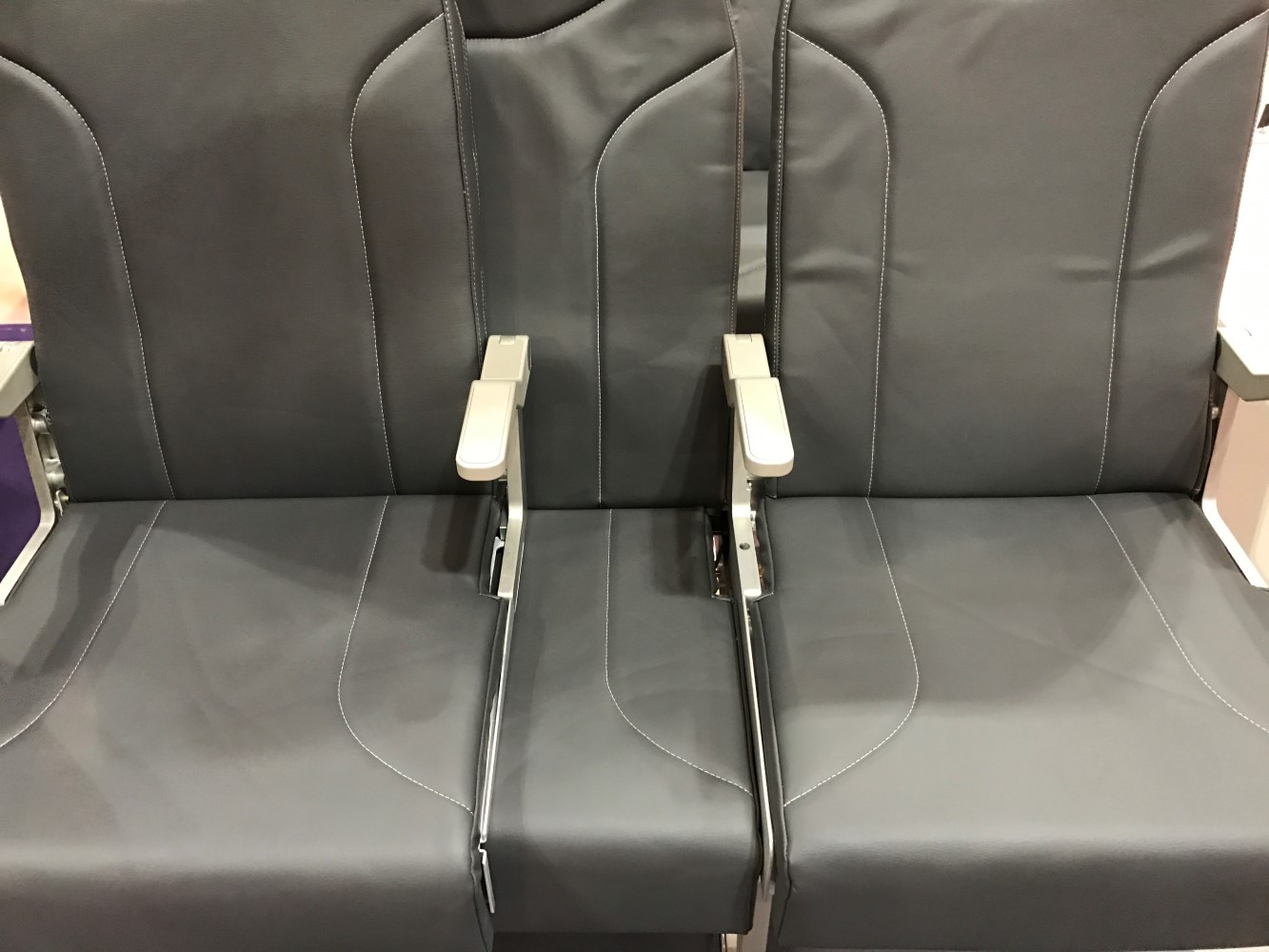 That sounds a lot like the Thompson Cozy Suite, RGN put to Scott. “I like the Cozy Suite. I don’t know why that one hasn’t worked. Maybe people feel too claustrophobic. The basic fact is, standard economy seats exist. We’re just slightly changing them, not significantly changing them.”

That, combined with the fact that many seats already have the pared-down appearance being displayed, might be the trick that gains the Side Slip Seat some traction with airline customers. 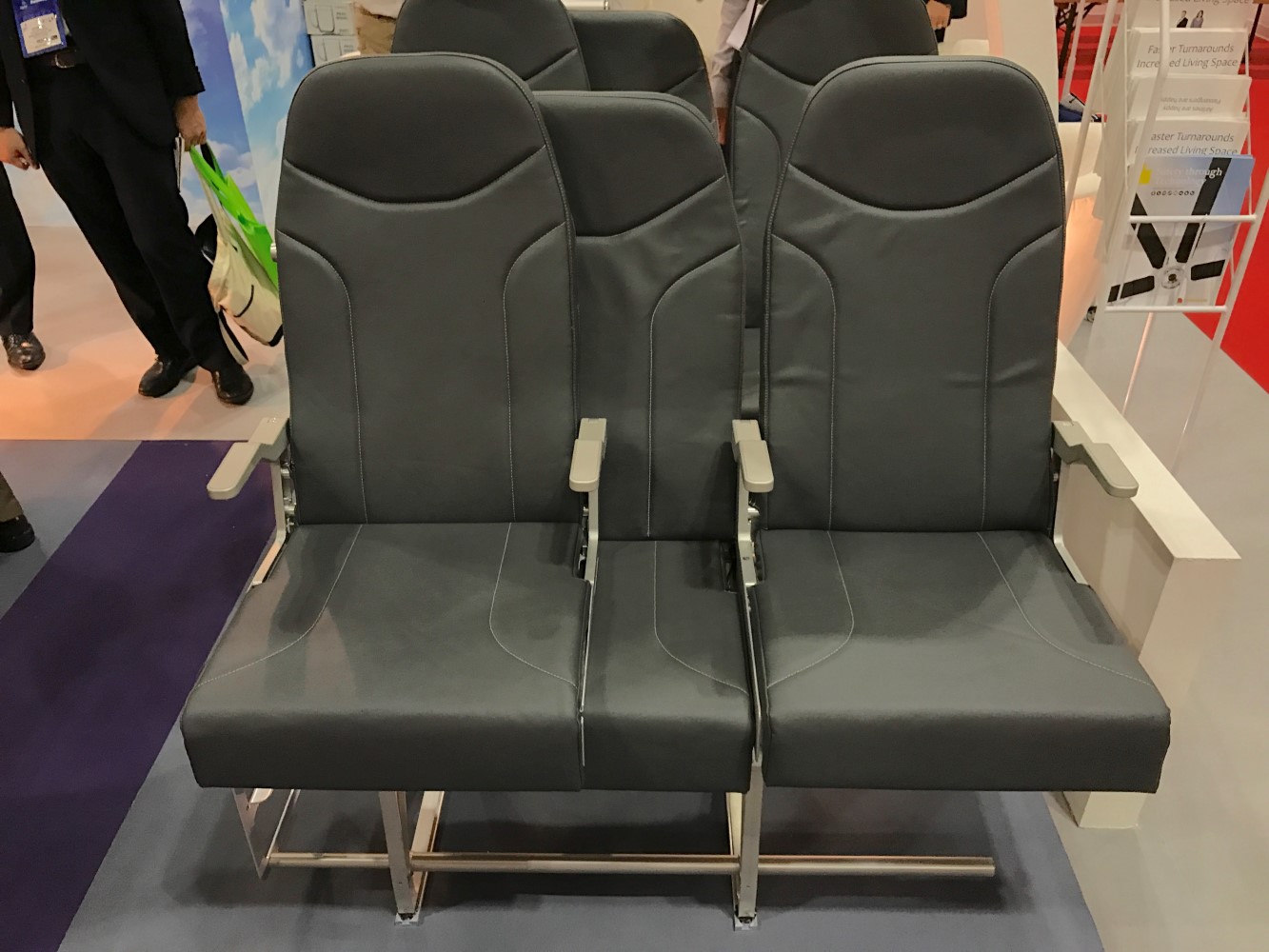 Functional design is key to this mock-up of the seat. Image: John Walton

Watch #PaxEx Minute: How not to sell Basic Economy to passengers