They are rarer than astronauts and, if we’re talking about a woman, even rarer still. Blimp pilots may be participants in one of the oldest fields of aviation, but the demands of the position and the small number of operating airships in the world means that meeting someone like Kristen Arambula, assistant pilot in charge at Goodyear’s Carson, California blimp base, is like winning the lottery.

Arambula, whose career with airships spans 2,400 flight hours and eleven years, over nine of them with Goodyear, is often at the controls of N4A “Spirit of Innovation”, the final model GZ-20A blimp flying in the world. Next year it will deflate for the final time, to be replaced by Goodyear’s newest fleet, semi-rigid “NT” Neue Technologie airships built in partnership with Zeppelin. *Wingfoot One* entered the skies two years ago, *Wingfoot Two* was recently christened, and the parts for *Wingfoot Three* are already trickling in from Germany to Goodyear’s Akron-area hangar. *Wingfoot Two* (N2A), whose godmother is entrepreneur and philanthropist Savannah James, wife of LeBron James, is destined for Californian skies and Arambula’s pilotage. For now she’s preparing to add mother to her resume, and she’ll begin training on the NT in early 2017.

We sat down with Kristen at Goodyear’s Wingfoot Lake Balloonport – yes, that’s the term for an airport that sees only airship activity – and shook the stars from our eyes to chat about her career flying big, bulbous airships in what is one of the tiniest corners of aviation.

You have experience as a woman being a pilot, and a pilot of a blimp nonetheless. What made you want to go into aviation and what was your path to this role?

KA: As of right now there are only three active female blimp pilots in the world. Goodyear has two of them—Taylor Laverty and myself. It’s a pretty small group as there’s probably only 40-50 active blimp pilots period. I got started in aviation because it seemed like a very glamorous job, exciting and different. I started it as a hobby. I was studying business in school and I took a couple of flight lessons on the side, and my thought was, “why not get paid to do something that’s fun all the time?” I went down the course of aviation, becoming a Certified Flight Instructor (CFI) and an Instrument Flight Instructor (CFI-I), and I fell into blimps because I was flight instructing at an airport that happened to be the blimp airport in Chicago, and so I saw blimps landing there. I thought that it looked fun and I pursued it by calling the company. I was able to get an interview and I was hired, and I did that for about a year and a half. It was life on the road constantly, living out of two suitcases all over the United States. I was almost right out of college and I had a lot of fun, but when a spot opened up at Goodyear it seemed to me the perfect job. The person whose place I eventually took had retired after 35 years with the company. I get to spend most nights at home and be with my family, and I get to work with a great team. It’s a lot more team-oriented than typical aviation. That’s part of the reason why I’ve stayed with blimps. You get to work with so many people and, when you travel, unlike airline pilots you get to hang out with a regular group. You’re not a stranger in any city.

I can’t say my experience has been that different as a girl. I’ve been very fortunate. I’ve heard stories but I haven’t experienced anything negative in my flight training or at Goodyear. I enjoy the travel aspect. It’s exciting. Our other female pilot, Taylor, who’s also in California, was an Alaskan bush pilot before she started flying blimps. The two are very similar because blimps are very weather-sensitive and you really don’t always know what you’re going to encounter.

What has been the greatest obstacle for you, during your career, in getting to this point?

KA: Shifting my mind from thinking about this as a completely glamorous lifestyle job and coming to grips with the reality of everything that needs to be known, like how an engine runs and knowing different system components. My initial progress was a little slower because of this, until I got a good grasp of mechanics. 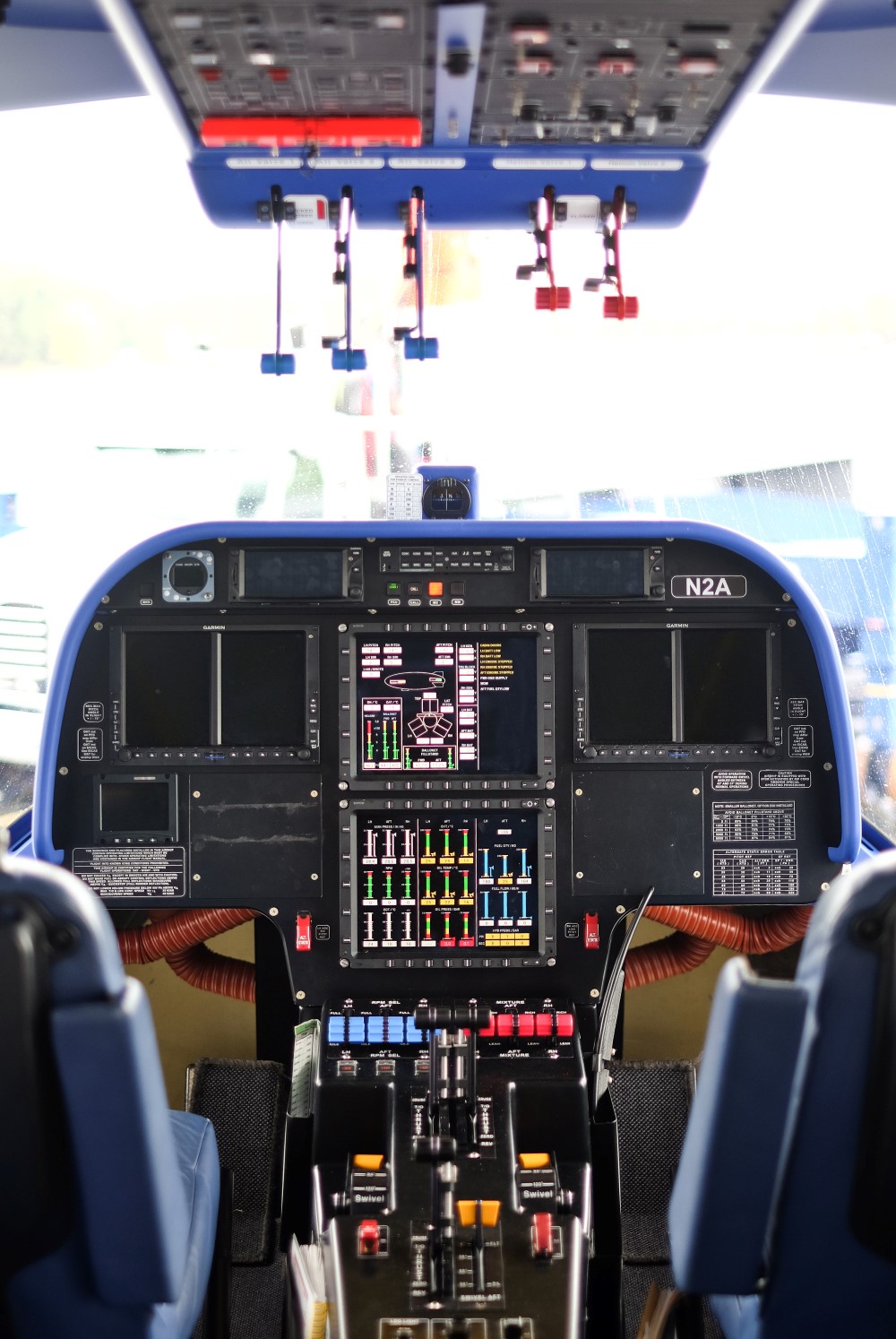 Do you have any aviation heroes?

KA: For me it’s the WASP [Women Airforce Service Pilots] and Jackie Cochran during World War II. They were female pilots who did all sorts of crazy things while the guys were off fighting. They would tow banners as targets that people on the ground would test-shoot at, and a number of the women died. They didn’t get much credit until the last fifteen or twenty years. I’m grateful that women like that went before me and took down the major obstacles that would have prevented me from reaching where I am today.

Can you share a bit of your day-to-day life as a blimp pilot?

KA: All of us do different things all the time. We do passenger operations, lots of television events, interviews with different newscasts or reality shows, and so it’s mixed up a lot. It’s neat and kind of outside of normal aviation. I don’t think any of us, when we decided to be a pilot, thought, “oh, I’m going to fly a blimp one day”. There’s so much variety to the job. We get the great part of aviation with it, but there’s also interesting PR things to do and we get to work with Make-A-Wish and other charities. We travel a lot – our California crew recently went to Vancouver. It’s an ordeal when we travel, with a crew of 20 people and seven ground vehicles. You have to stop quite a bit, since an airship can only travel so far in one day, and we have to plan ahead of time, like making travel accommodations for 20 hotel rooms at each stop. It’s fun because you’re traveling with friends. The group becomes a family and it is a little bit of a lifestyle as opposed to a 9-to-5 job.

What kind of reactions do you get from people when you tell them you’re a blimp pilot?

KA: Well, if I’m outside of work I typically don’t volunteer that I’m a blimp pilot, only because they want a ride and you don’t want to have to disappoint people. If I do tell someone I’m a blimp pilot, then they either don’t believe it because there are generally so few, or they get really excited and start asking all sorts of questions. It is fun to talk about. Luckily I’m doing something I love and I don’t mind discussing the blimps when I’m out and about.

Do you see yourself flying blimps for the rest of your life?

KA: Until retirement! We’ll do it as long as they let us. It’s a great work-life balance. You’re not constantly changing time zones and you’re working with a large team. There’s no auto-pilot in [the blimps]. Our friends – like 98 percent of the people we went to class with – are in the airlines or corporate flying and they don’t have the history that we have. The whole christening process is really unique and the average pilot doesn’t get to go through something this meaningful. We’re following in the footsteps of aviators for nearly one hundred years of blimp flying at Goodyear. Yes, systems and a lot of other things have changed, but the core of the tradition is the same. 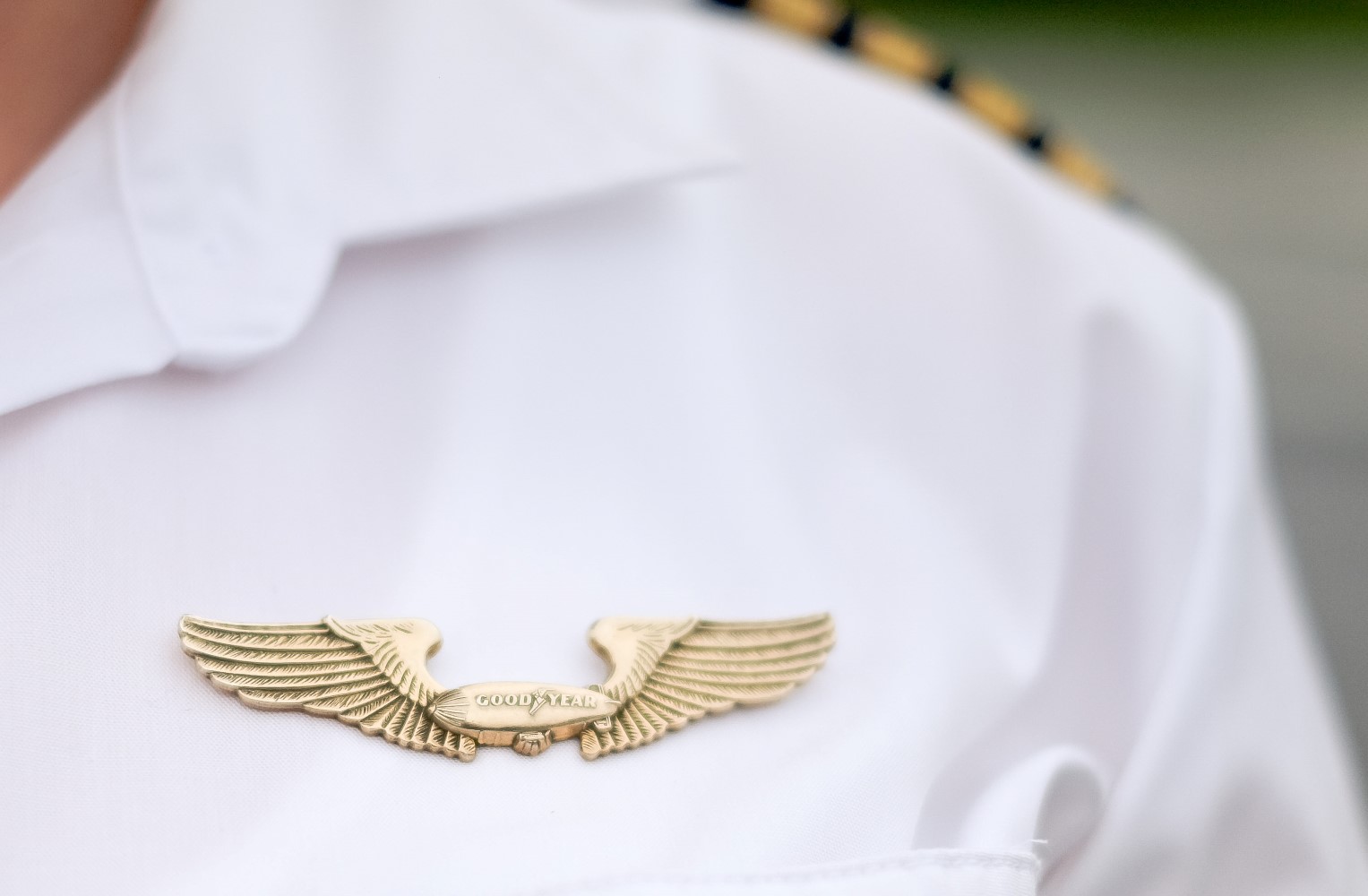 Retirement is the only way Kristen Arambula is leaving the life of a blimp pilot. Image: Steven Drescher

What advice would you give to someone who is thinking about career paths and sees you and what you’re doing, and wonders if it’s also possible for them?

KA: It’s tough only because there are so few spots in the world for blimp pilots. I did struggle a little bit, being a woman, since I didn’t know as many technical things. I got some extra help – always asking my teachers when I needed it. Don’t pretend to know, if you actually don’t know what someone is talking about. I went to University of Illinois and did the flight program there. For girls, ask for knowledge. Ask for someone to teach you how to change a car tire, check the oil, just begin with basic stuff. That approach will help you as you progress in an aviation career. Keep pursuing it; if you run into a roadblock then ask again for help because people in aviation are usually pretty passionate about it and you’ll find someone to help. AOPA is a great organization with support for student pilots. If you’re a women, the Ninety-Nines and Women In Aviation International. The EAA. These are all organizations that love to help future pilots.

What experience have you had that makes you think, “this is why I’m up here?”

KA: My favorite thing about flying blimps is the passengers, when they’re really excited. Those usually fall into a couple categories: the young kids or those who are fairly old. The kids can are so excited to be on the blimp or near the blimp that you can tell they can’t keep themselves still. Then the older people have wanted to fly in the blimp their whole life. When they really appreciate something you do then that makes it for me. I love it.

There are many things, on a monthly basis, where I’m like, “wow this is a great job. I’m really glad I’m doing this.” Like I said, my favorite thing is the passengers. We do make a difference in some lives, like when we fly Make-A-Wish and Toys For Tots, and you get a sense of your impact on people. I also enjoy our experience of the topography. Seeing mountains, the coast! Flying at our base in Florida you can see so much sea life looking straight down into the water. We’ve seen so much. The cliffs as we fly through Oregon on our way to Canada! You can see the redwoods! I can name like twenty different things that have made big impressions on me in my nine-and-a-half year career with Goodyear. 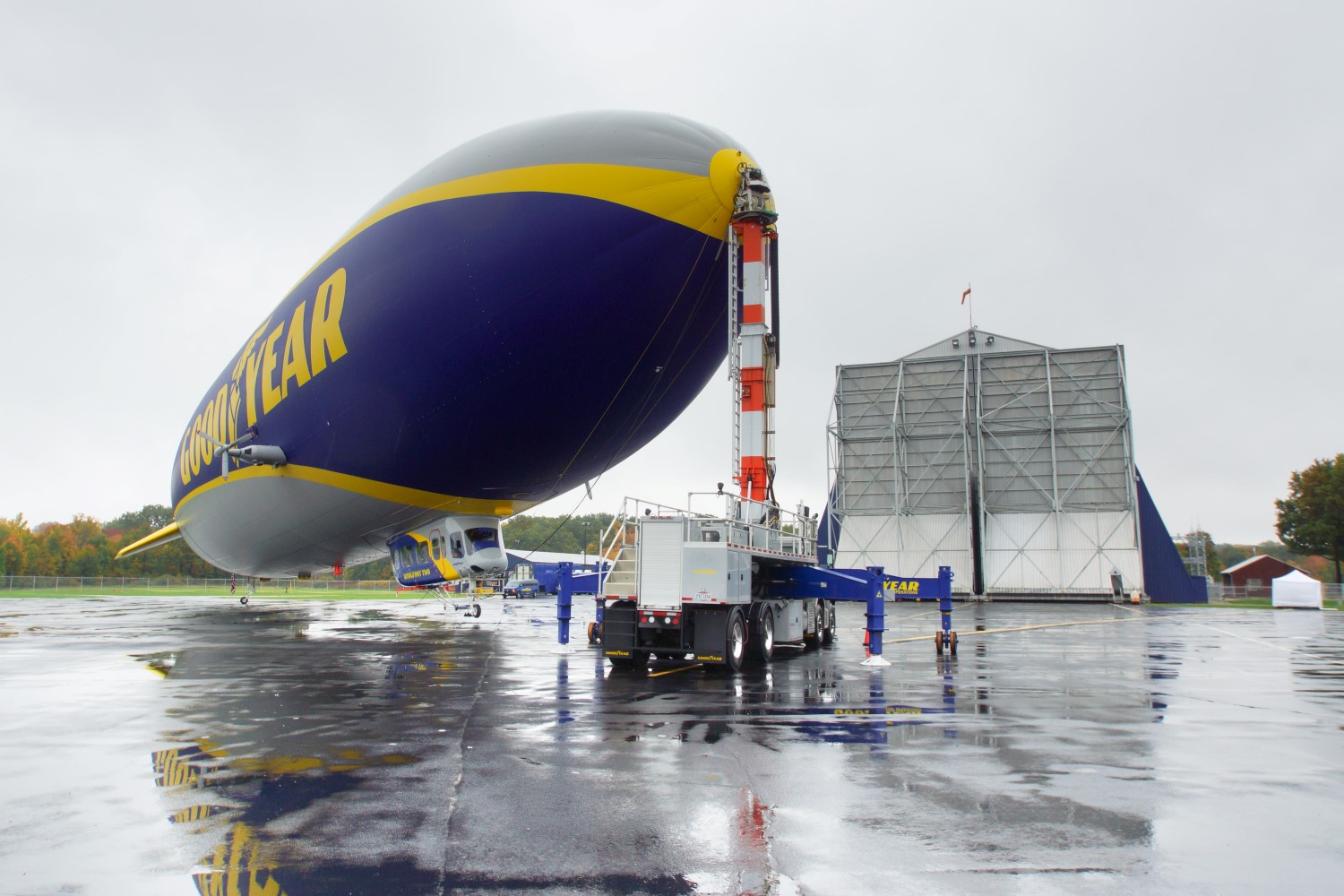 Flying with Goodyear is unlilke other pilot positions in aviation. Image: Steven Drescher