In business since 1999 and a leading provider of flight operations support and other aircraft-data services to business-aviation operators since then, as well as to airlines, APG has developed its real-time weight-and-balance curtailment functionality to integrate completely with the iPreFlight app’s existing aircraft runway-performance calculation capabilities.

Mike Caflisch, CEO of APG, says this will allow pilots to provide weight-and-balance curtailment in accordance with FAA Advisory Circular (AC) 120-27E, a 71-page document dealing specifically with aircraft weight and balance control, in real time at any point before or during a flight and also completely within the iPreFlight app loaded on their iPads.

This means that, before or during a flight, pilots will not need to “jump out [of iPreFlight] to third-party apps or a whiz wheel”, in order to calculate aircraft maximum take-off and landing weights and runway distances and check airport obstacle and terrain data, says Caflisch. (The “whiz wheel” is the E6B rotary slide-rule analog computer originally developed in the 1930s to let flight-ops departments and pilots perform many kinds of flight-performance calculations. Developed much further since then, the E6B is still in widespread service today.)

“Version E [of FAA AC 120-27] has been around for many years, but just as runway-analysis calculations were a mystery in the early days” to many business-aviation operators, now operators are finding weight-and-balance can be optimized in real time and this can provide performance benefits for every flight they perform, says Caflisch.

“Curtailments [of aircraft weight and balance] are adjustments that must be made to manufacturers’ certified center-of-gravity (CG) envelopes to account for loading variations and the in-flight movements [of passengers] that you encounter in normal operations,” explains Caflisch. This is “to ensure that passenger movement does not take you out of the CG envelope”, a circumstance that could be disastrous for the safety of an aircraft, particularly a smaller business-aviation type. 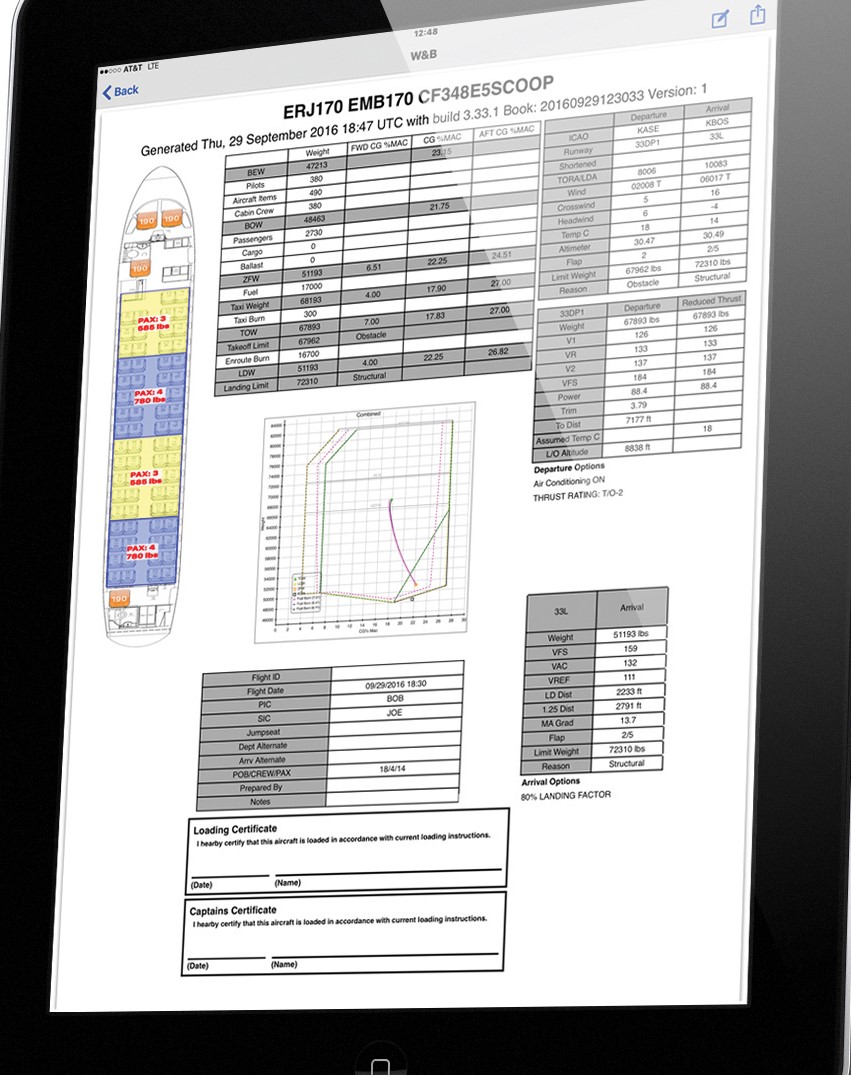 This is what the new real-time aircraft weight-and-balance function in APG’s iPreFlight iPad app looks like in the screen, when in operation. Image: Aircraft Performance Group

The weight-and-balance calculation requirements specified by AC 120-7E present a “really confusing” situation, says Caflisch. Whether an operator uses manufacturer-defined standard passenger-plus-bag weights or the actual weights of each passenger and bag on board a flight to calculate the aircraft’s CG range and curtail the CG during the flight within that range “really doesn’t matter. But what you have to do is curtail [the aircraft’s CG range] for expected or normal passenger movement. That’s what most operators are not doing.”

Instead, most – particularly business-aviation operators such as Part 135 charter companies and business jet fractional-ownership firms – are curtailing based on standard scenarios, usually worst-case. This reduces their ability to load an aircraft optimally with passengers, fuel, bags and cargo.

“Our feature takes the standard OEM-certified envelope and allows the operator to curtail based on the real-time load today,” for every individual flight, optimizing the aircraft’s payload/range capabilities each time, says Caflisch. For instance, the calculations for curtailing a business-aviation aircraft’s CG range for a flight with three passengers on one day would provide a substantially different solution than calculating curtailment for a flight by the same aircraft with eight passengers the following day.

Whether or not pilots’ iPads serve as electronic flight bags (EFBs), iPreFlight does not interact with the aircraft’s flight-control systems, so it is not classed as a Class 2 or Class 3 EFB function. Class 2 EFB functionality often requires a supplemental type certificate and Class 3 functionality always does.

Caflisch says APG’s apps and services are on “thousands” of aircraft worldwide, ranging from twin-turboprops such as Beechcraft KingAir at the smaller-aircraft end all the way through every business-jet type to mainline commercial narrowbodies and widebodies at the large-aircraft end. Its customer base is “very international”, the company having customers everywhere there are larger concentrations of corporate-aircraft operators.

APG’s iPreFlight app doesn’t need Internet connectivity to perform its real-time calculations. The only time iPreFlight requires connectivity is when updates are required for its database of airport terrain and obstacle information, or aircraft-program information such as aircraft flight manual revisions. 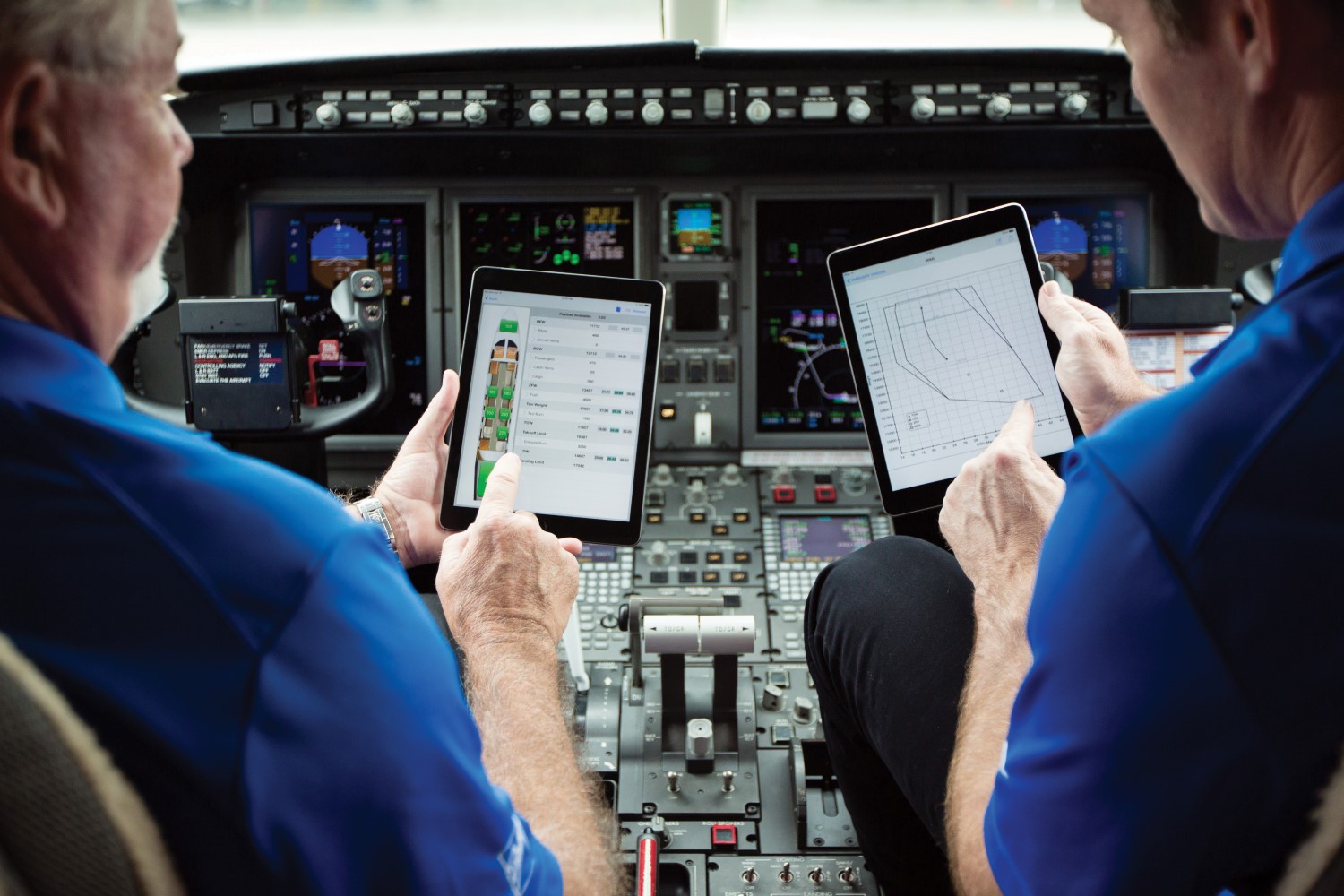 Here, the captain of an aircraft is using APG’s iPreFlight iPad app to calculate is weight and balance in real time, while the first officer is using the app to determine the aircraft’s runway performance for the flight. Image: Aircraft Performance Group

Women share what helped them cope during world’s longest flights