A group of girls stood out during the recent Experimental Aircraft Association’s (EAA’s) AirVenture fly-in, and attracted curiosity especially from other women at the event in Oshkosh, Wisconsin, because they sported a t-shirt with giant wings festooned with the word “FlyGirl”.

The girls, ranging from grades nine through 12, were part of the EAA Women Soar You Soar (WSYS) day camp, which was founded in 2004 and is scheduled each year during the world’s greatest aviation celebration that attracts 500,000 #AvGeeks and 20,000 aircraft. What better place to get immersed in aviation?

Guided by two volunteer mentors for every eight girls, the 52 High School students from 22 states learned about careers in aviation and gained hands-on experience with everything from drones (including a gift of a drone from Multicopter Warehouse) to flight simulators and aviation photography during the four-day camp.

Perhaps the most poignant moment came during the photo op for WomenVenture – a week-long program offering activities designed to empower women and enable them to pursue their dreams in aviation. The youngsters involved in WSYS surrounded four WASPs in attendance at WomenVenture. In case you don’t know about WASPs, they are the Women’s Airforce Service Pilots that trained their male colleagues to go off to war during World War II, ferried aircraft for combat and training, flew aircraft for target practice and died in the service of their country. 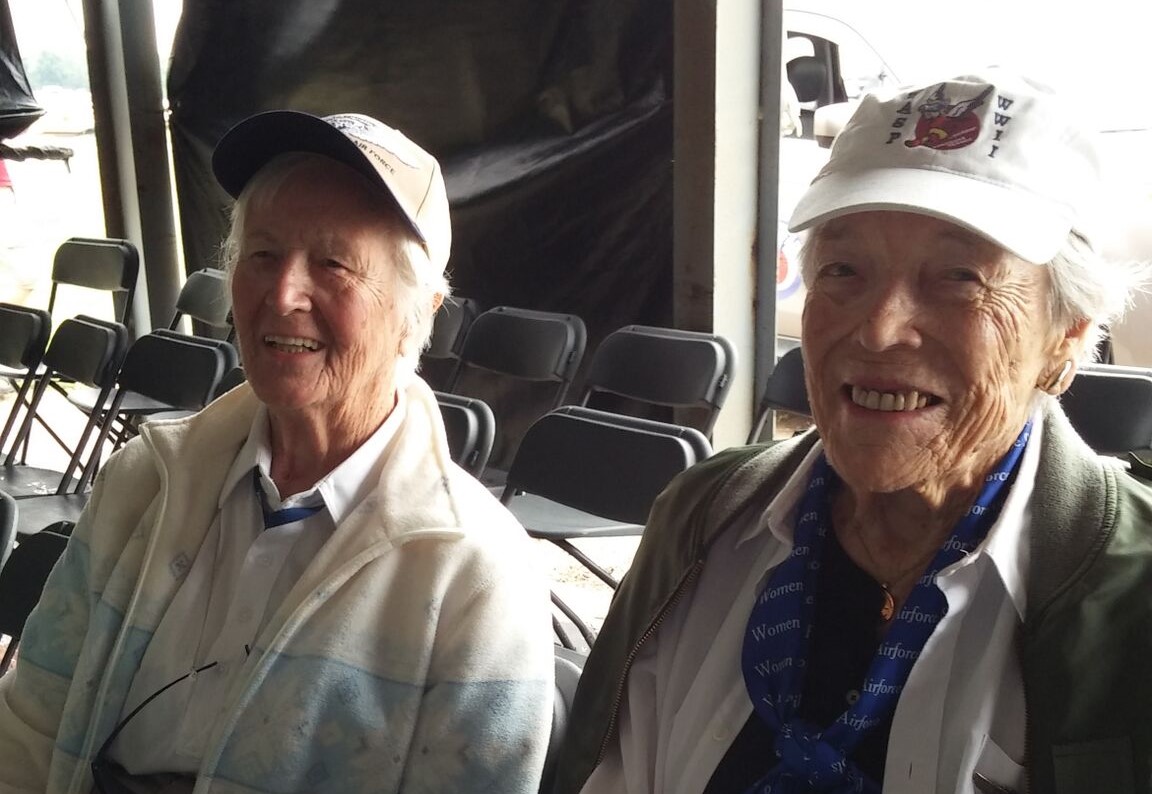 For those of us participating in the photo, including the all-female crew of an Alaska Airlines Boeing 737 that served as the backdrop for the pic, there was palpable symbolism in the gathering which felt as if we were passing the baton from the WASP heroes through us to the WSYS campers that will ultimately pursue an aviation career.

In the 1,000-strong crowd were officers and members of Women in Aviation, the Ninety-Nines, Professional Women Controllers, International Society of Women Airline Pilots, the Whirly Girls and the Association for Women in Aviation Maintenance among many other organizations promoting women in aviation careers. The 737, honoring Boeing’s 100th anniversary, carried 100 Alaska Airlines employees taking part in WomenVenture. 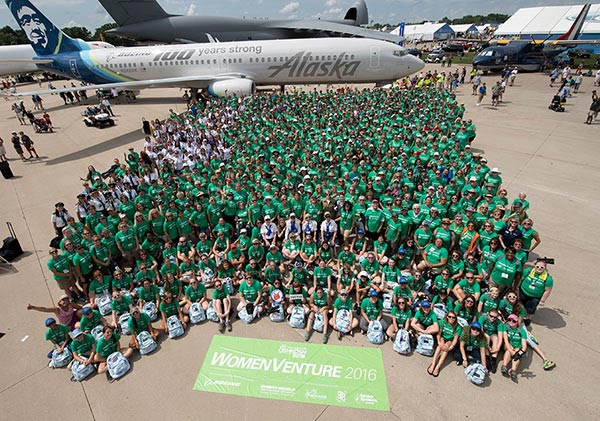 The strength of women in aviation can be seen as they gathered for the annual WomenVenture group photo that numbered 1,000 strong. The Women Soar You Soar camp participants can be seen in front of the four seated women in white who were the WASPs attending this year. Those at the left in white included Alaska Airlines employees flown in on the 737 in the background, including the all-woman crew.  Image: EAA/Erin Brueggen.

The Women Soar You Soar camp is $75 for all activities, which are valued at over $600, according to EAA educator Tara Parkhurst. Beginning on the last Sunday in July in Oshkosh, activities include mentoring sessions, air show attendance, workshops on aircraft building and maintenance, and meeting the WASPs. This year, campers were offered a flight in a 1929 Ford Tri-Motor, one of the earliest commercial aircraft, or a seaplane as well as a tour of the Oshkosh control tower – the world’s busiest during the annual EAA AirVenture. Attendees also visited Aviation Gateway Park to connect with colleges and other training programs focused on careers in aviation. And this year’s exhibitors included many regional airlines seeking pilots for today’s cockpits or to advise those considering such a career path.

The young women also heard about scholarships available to attendees to fund their higher education. Few realize that there is a single resource for all aviation scholarship programs and that is the University Aviation Association’s Collegiate Aviation Scholarship Listing.

“We do not have numbers of how many girls actually pursue education and careers in aviation,” said EAA educator Tara Parkhurst. “But we do know that many girls come back year after year.” 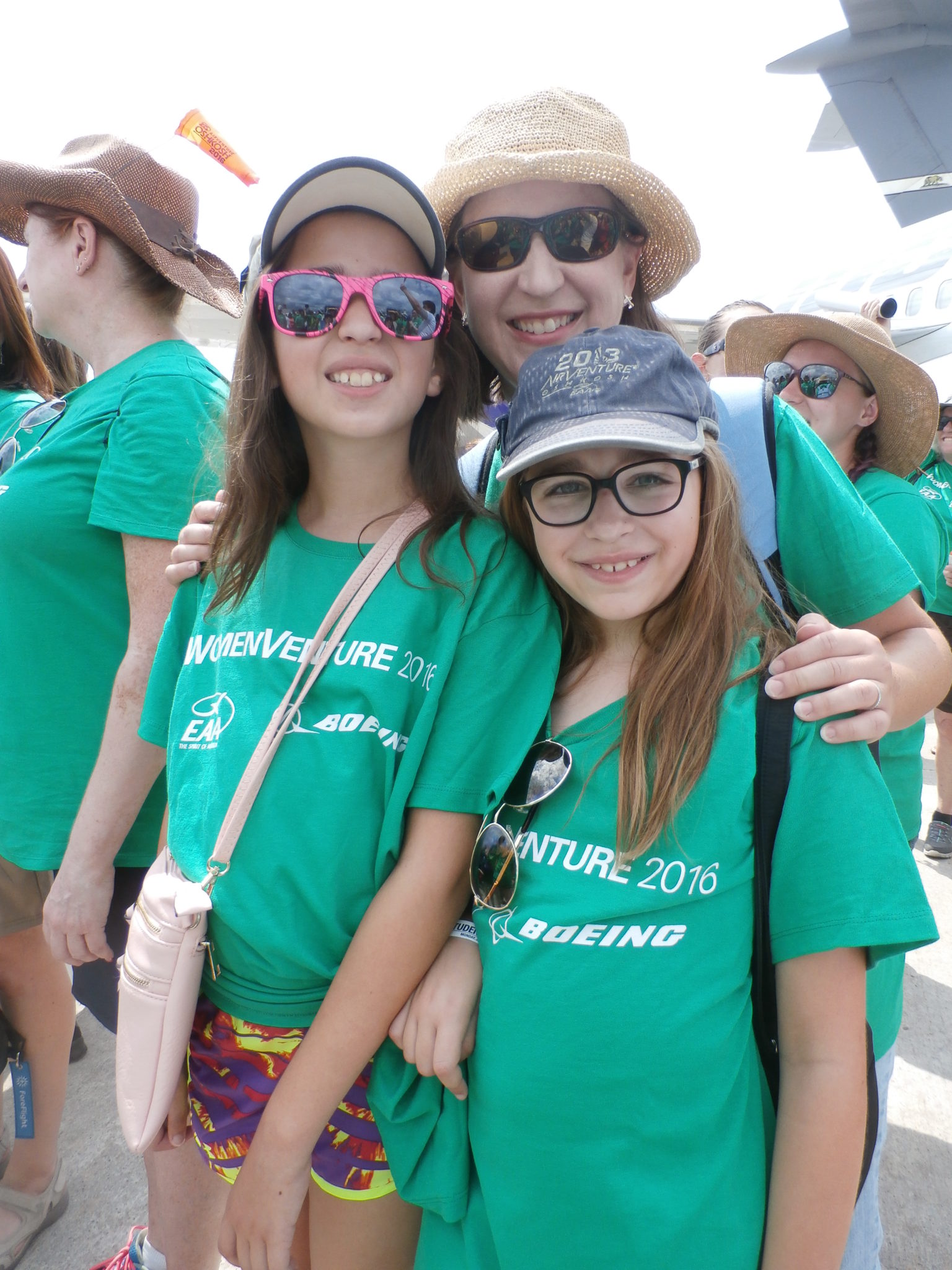 Mother and daughters join over 1,000 others to celebrate women in aviation. Image: Kathryn Creedy

EAA marketing specialist Daniele Frechette agrees. “These kids are often the only one in their school who have an interest in aviation,” see told Runway Girl Network. “They come here and they meet others their age who share the same interest and meet women who are already in aviation who volunteer to be mentors. That makes aviation more accessible and they end up creating a huge network through Snapchat and Instagram, which reflects the power of social media with these kids.”

There was only one disappointing aspect to those attending the camp and that was the lack of diversity. The problem was mirrored in the attendance at EAA AirVenture itself. But industry is working to improve. It can turn for help to the Latino Pilots Association, the Organization for Black Aerospace Professionals and Black Pilots of America. The National Gay Pilots Association exhibited at EAA AirVenture.

EAA’s Frechette and Parkhurst are keenly aware of the disparity. Parkhurst noted that there were only four people of color in their group this year. “We want to encourage all women from all backgrounds to participate,” she said.

They are anxious for more diversity and are expanding their recruiting efforts beyond the EAA membership. They plan to begin with schools in the Milwaukee-Green Bay-Oshkosh areas emphasizing STEM learning but acknowledge it is a work in progress.

Today, only 5.12% of professional pilots in the US are women, according to the Federal Aviation Administration’s (FAA) database, which also shows that globally, the percentage is only 5.44%. The poor numbers are also reflected in the number of African American pilots at just under 3% and Latino pilots at about 5%.

The WSYS camp does not include overnight accommodations and attendees were mostly from families who were already attending EAA AirVenture. At one time, attendance included lodging at the University of Wisconsin-Oshkosh but the pressure on the dorms is tremendous owing to the crush of AirVenture attendees and the necessity for hiring overnight supervision for campers. As it is, many AirVenture attendees end up camping under the wing of their aircraft. Quick back-of-the-envelope calculations suggest that accommodations alone could run as high as $12,000 were the entire 100-girl capacity of the camp be filled, meaning the program needs far more sponsors than it already has.

“It is important that we keep the cost low in order to ensure the program is accessible to all,” said Frechette. “In addition, a lot of our 900 local chapters sponsor girls. Those interested in increasing attendance and diversity should talk to their local EAA chapter. We never want to turn anyone away because you never know who that young person might be. We are also working with Women in Aviation and its chapters to increase sponsorships.” 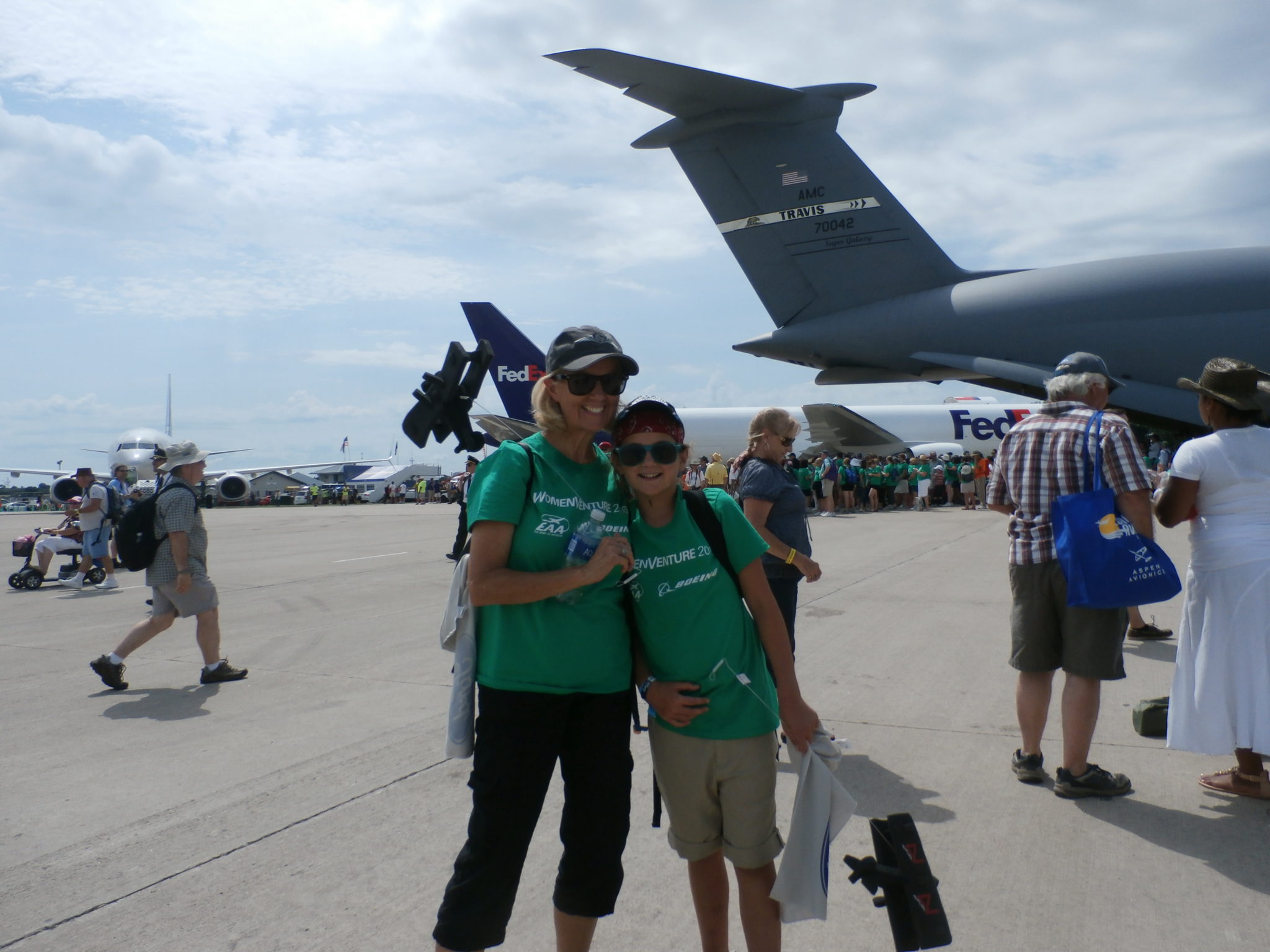 Grandmother and granddaughter get in on the WomenVenture photo op. Image: Kathryn Creedy