With a raft of new regional jets and small airliners set to enter into service over the next 24 months, RGN quizzed execs at Bombardier, Embraer and Mitsubishi about the current state of play and next steps for their connectivity solutions.

Overall, Bombardier’s CSeries seems best placed at this point in time, with Embraer’s E-Jet E2 a close second thanks to the existing connectivity offered on some current-generation E-Jets operated by JetBlue. Mitsubishi, meanwhile, is lagging behind, despite an entry into service date of mid-2018.

Canadian airframer Bombardier is the first to market with its next-gen jet, although it is notably bigger than any of the other players, particularly in passenger capacity as configured by the airline launch partners for the CS100 (Swiss, 125 seats) and CS300 (airBaltic, 145 seats).

As reported by RGN, Bombardier and Panasonic Avionics have been working closely together on connectivity for the CSeries for some time, and the Panasonic Ku offering is linefit offerable on the CSeries. Neither launch customer has selected the solution, though Swiss operates the same Panasonic Ku system on its factory-fresh Boeing 777-300ER aircraft.

While Bombardier clearly has an installation base for Gogo’s ATG systems on its Canadair Regional Jet (CRJ) generation of regional jets, the smaller tube of the CRJ (and the relatively short flights it tends to operate) has meant that satellite systems have not yet proven attractive for airlines (a number of satellite connectivity stakeholders are working on smaller-profile antenna systems to address this sector, however).

As for other connectivity providers, Bombardier Vice President & General Manager CSeries Rob Dewar referred to Gogo, Global Eagle and Inmarsat very much in the future tense for the CSeries — these “will be evaluated case by case, based on customer interest and priority” — rather than in the present.

Brazil’s Embraer isn’t, of course, a new entrant to this market, and it is expecting its experience with developing connectivity options for the original E-Jet family to read across to the E2, which is to be delivered from 2018.

With a significant part of the order book for the E2 coming from original E-Jet operators, an existing install base like ViaSat’s Ka-band on jetBlue’s E190 fleet, and the commonality between the families, is likely to offer cost savings, Rodrigo Silva e Souza, senior manager for product strategy, suggested to RGN.

Yet of note, Silva led our discussion around wireless entertainment rather than inflight connectivity. The overall sense RGN took was one of the airframer not being completely on the ball about IFC. Progress, too, feels behind where it should be at this point in the aircraft’s development cycle.

“We are now in the process of selecting the suppliers,” Silva said for connectivity, “actually, right in the middle of the process.” This feels behind the ball the ball.

Embraer has not yet ruled in or out any of the existing connectivity suppliers, Silva noted. “We are right in the middle. We have not finished even the first phase, but the interest has been really strong, actually, to be honest, from the connectivity providers.” 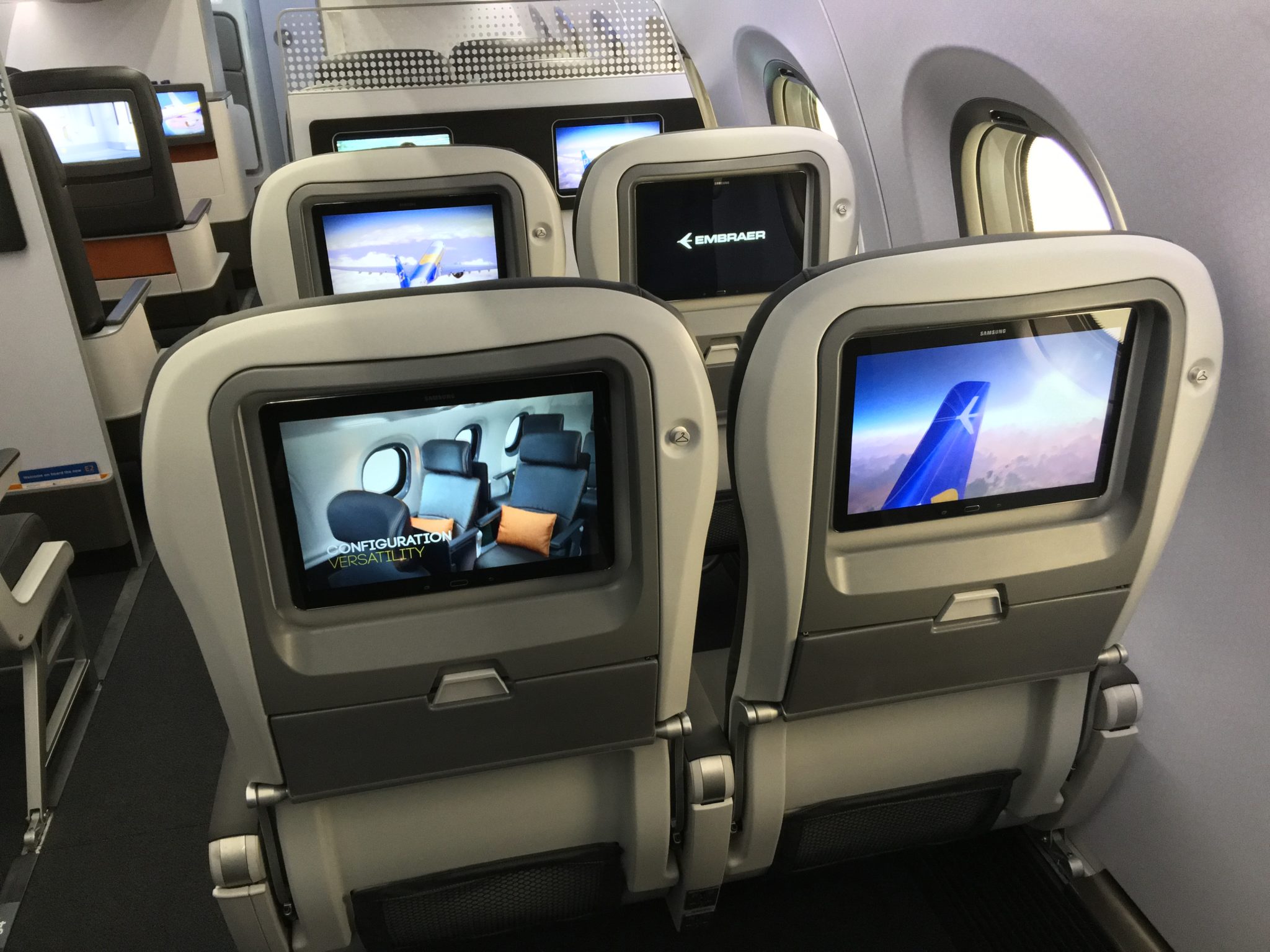 Embraer says it has not ruled out any connectivity provider. Image: John Walton

It would be very surprising if Embraer were to restrict airline customers’ connectivity options for its E2 jets — this is a remarkably cutthroat end of the market at the moment. Yet the lack of demonstrable progress is somewhat concerning at this late stage in the game. There only needs to be a bit of interference here, a wiring glitch there and a birdstrike concern besides to set connectivity certification back by a matter of months, if not years.

Mitsubishi is light on MRJ details at this stage

If it felt like Embraer was a little backfooted on the E2 connectivity uptake, Mitsubishi isn’t in a clear position either with its MRJ. Discussing connectivity with Yugo Fukuhara, vice president and general manager for sales & marketing, the focus was on possibilities and future options rather than demonstrating existing work around connectivity.

“We will have some partnerships with third-party providers, and we are preparing some provisions and are working together to get amended type certificates or supplementary type certificates,” Fukuhara told RGN.

Linefit, Fukuhara said, “depends on the product. It is one of the possibilities, yes. We are now developing our connectivity options together with the suppliers.” 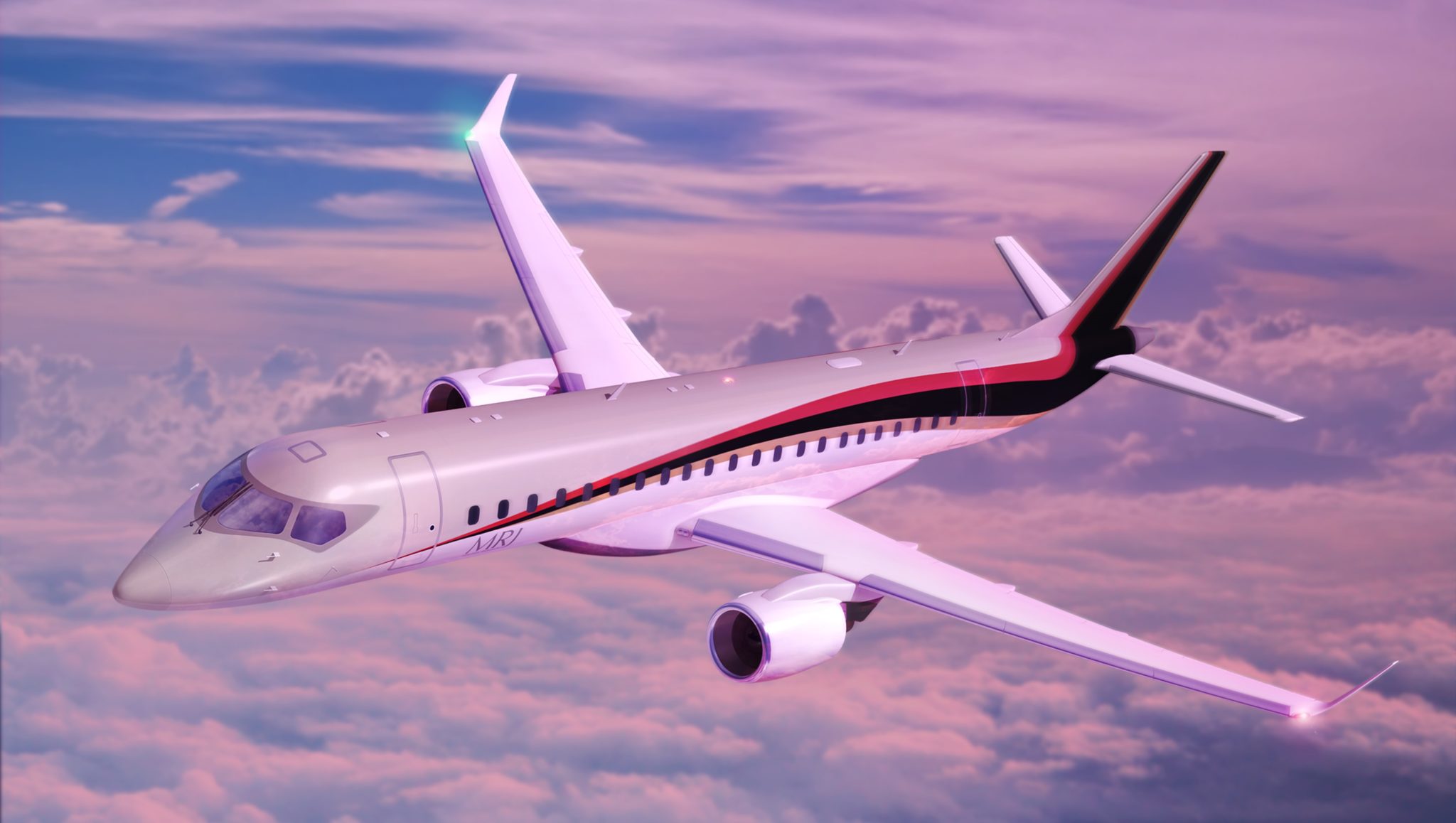 Mitsubishi is mulling its options but mum on specifics. Image: Mitsubishi

Overall, the MRJ felt very light on the substance. Like Embraer’s E2, this 76-88 seater will debut in 2018, by which time launch customer ANA and early buyer JAL will be champing at the bit to install connectivity to match their rapidly deploying fleets. It truly felt like MRJ was even further behind the curve than Embraer on connectivity.

RGN Premium: Picking up the pace on PAC’s payload progress