HAMBURG — At the question and answer session that closed the Airbus Innovation Days here in Germany’s aviation capital, Runway Girl Network asked the European airframer’s President and CEO Fabrice Brégier why zero women had presented at any sessions of the two-and-a-half day event, why so few ethnic minorities are represented in its senior management, and what Airbus’ solution was to its obvious diversity problem.

Brégier’s response on gender diversity was admirable in its ambitions. “We have not enough women. This is clear,” Brégier said bluntly. “We need to attract more women. Not just as head of communication, or HR, or Legal, but in production, in engineering, in programme management, in commercial.”

Highlighting that Airbus has several women in senior non-engineering roles, he expressed aspirations to do more, yet spoke openly of the challenges faced in the pipeline: just 15% of relevant specialist graduates are women, with Airbus’ hiring target at 25% women, and the company is currently at 25%.

“We are deliberately trying to make additional efforts,” Brégier said. “This is only one example of what we are trying to do.”

Yet the proof of Airbus’ good intentions will be in hiring — from within or from without — senior women to represent the company to media on strategic and technical subjects. Runway Girl Network has profiled women from Airbus with technical specialties, and indeed within the Hamburg aviation cluster alone there are several very senior women

Moreover, the sharp intake of breath from those present even on asking the question, and the number of women Airbus employees who approached RGN journalists privately after we asked it, demonstrate that there is substantial appetite for increased gender diversity.

It is impossible to consider Brégier’s response to the ethnicity part of RGN’s question in the same broadly positive way, however. “I think we do a lot, and by the way, if you go to Mobile, you will see many Black people,” he said. “So I invite you to see that we have a real diversity everywhere. My assistant is Black, but this is not why I selected him; it is because he is very good.”

Brégier’s response drew gasps in the room at several points in this section, and we present it here in full, unedited. The question on diversity of gender follows the discussion of ethnicity.

In Brégier’s defence, Airbus is indeed a multinational corporation and so has substantial diversity among the larger (and indeed smaller) European nations.

“Honestly, we are the most integrated company in the world,” Brégier said. “We have four main nationalities, as you know, in Europe, but we have, I think, at Airbus one hundred nationalities. So we have Chinese, we have Indians, but not only locally — we try to have them on board in Toulouse or Hamburg. So you will see, I am sure, in the next ten years, people who will take up top-level management positions which will no longer be French, German, British, Spanish, or even American, for John Leahy.”

But a majority of senior staff — unrepresentative of either Airbus’ airline customers or their passengers — and every single member of the airframer’s executive committee are men of white Western European ethnicity. 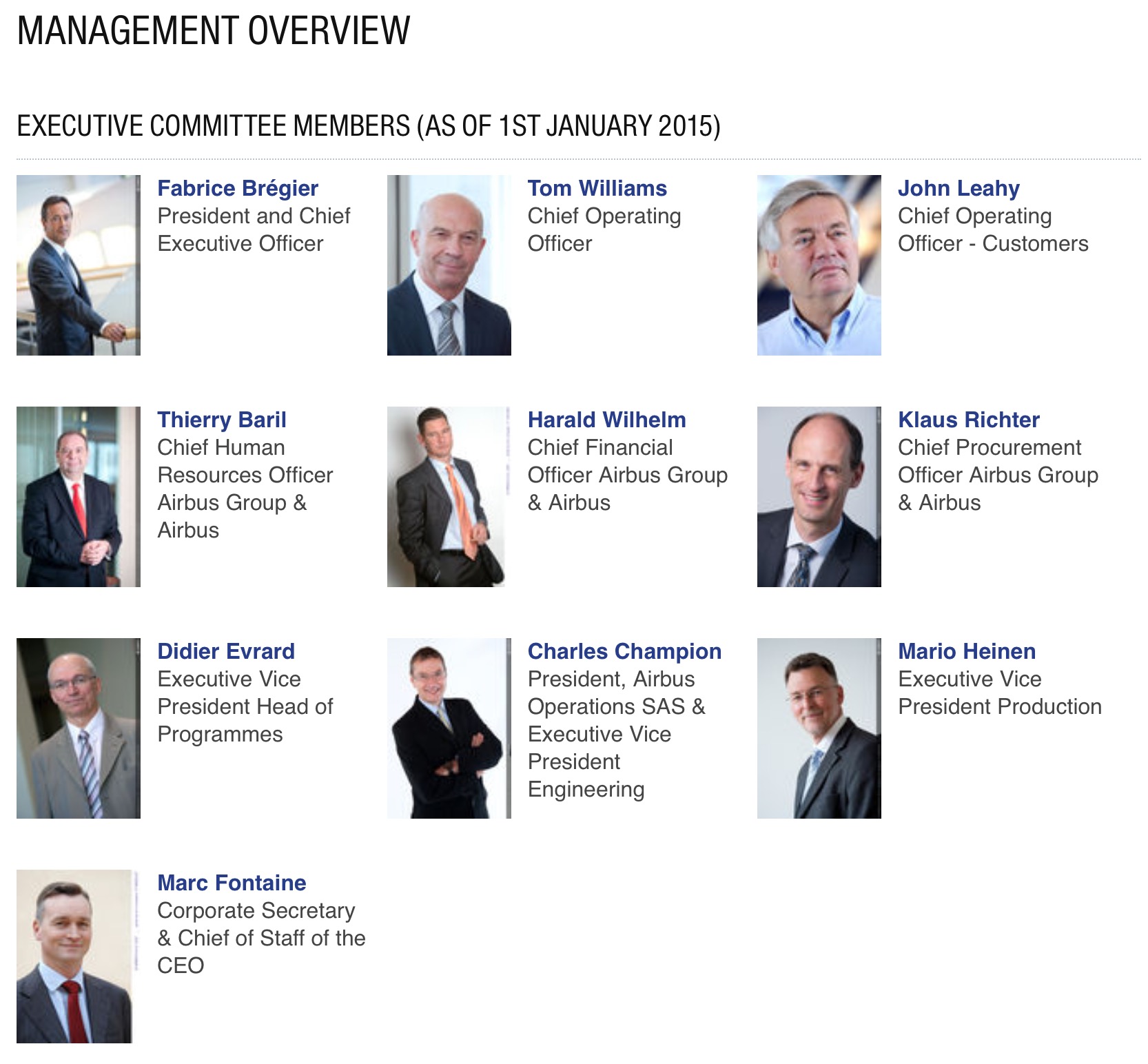 With the exception of head of marketing and strategy Dr Kiran Rao, who Brégier described as “not black, but he is not totally white”, and the regional leads, there is a notable lack of ethnic diversity in Airbus’ other senior staff. There is a similar lack of ethnic diversity among its board of directors, of whom three of twelve directors are women, all three of whom were first elected since 2015. If indeed Airbus’ staff are as diverse at specialist and managerial level as Brégier contents (and RGN has no reason to doubt him on this point), there are still questions to be answered about how the company is attracting, managing and nurturing talent.

While there is something to be said for having senior executives from multiple developed Western countries, ethnic minorities from these countries are underrepresented, as of course are women.

Moreover, while there may be an requirement for tertiary technical training in specialist and specialist management positions, the majority of these senior roles themselves require an overview and synthesis skillset rather than an in-depth specialism, so “pipeline” issues would seem less vital. It should be noted that, in contrast, the Executive Council of the Boeing Company is markedly more diverse in both gender and ethnicity than Airbus’.

Overall, Brégier’s agile and considered answer to the gender equality question stood in fairly stark contrast to his answer on diversity of ethnicity. It is somewhat difficult to believe that this question has not been asked — and a solution to Airbus’ ethnic diversity problem at least considered and begun to be put into place — before 2016.

John Walton was a guest of Airbus for its Innovation Days media event.