Flights from Christchurch to Sydney are timetabled at three hours and twenty minutes, although in the Roaring Forties that number is fairly flexible. Choices on the route in business class are a Qantas 737 at 0610 (0330 wakeup, no thanks) or the Emirates 777-300ER tag flight at 1555. Yet, returning with my parents from Christchurch to Sydney at the end of a family holiday down under, I clicked through to discover that first class was a premium of just over US $200.

This would be the first time in my life I’ve ever paid actual cash money for first class rather than redeeming miles or being hosted by an airline. Did we need the extra space compared with business on a three and a half hour flight? Not really. Do we all love travelling, enjoy the chance to sample an interesting range of wines, and get a kick out of new experiences? Yes. Was it a fun experience to round off the holiday — and surprise my mother on Mother’s Day? Absolutely.

The Emirates first class product itself isn’t new, and I knew that going in. In fact, in the context of Etihad’s Residence and Apartments, not to mention a half-dozen other products that are more elegant and less blingy than the Emirates suite, it looks positively dated. 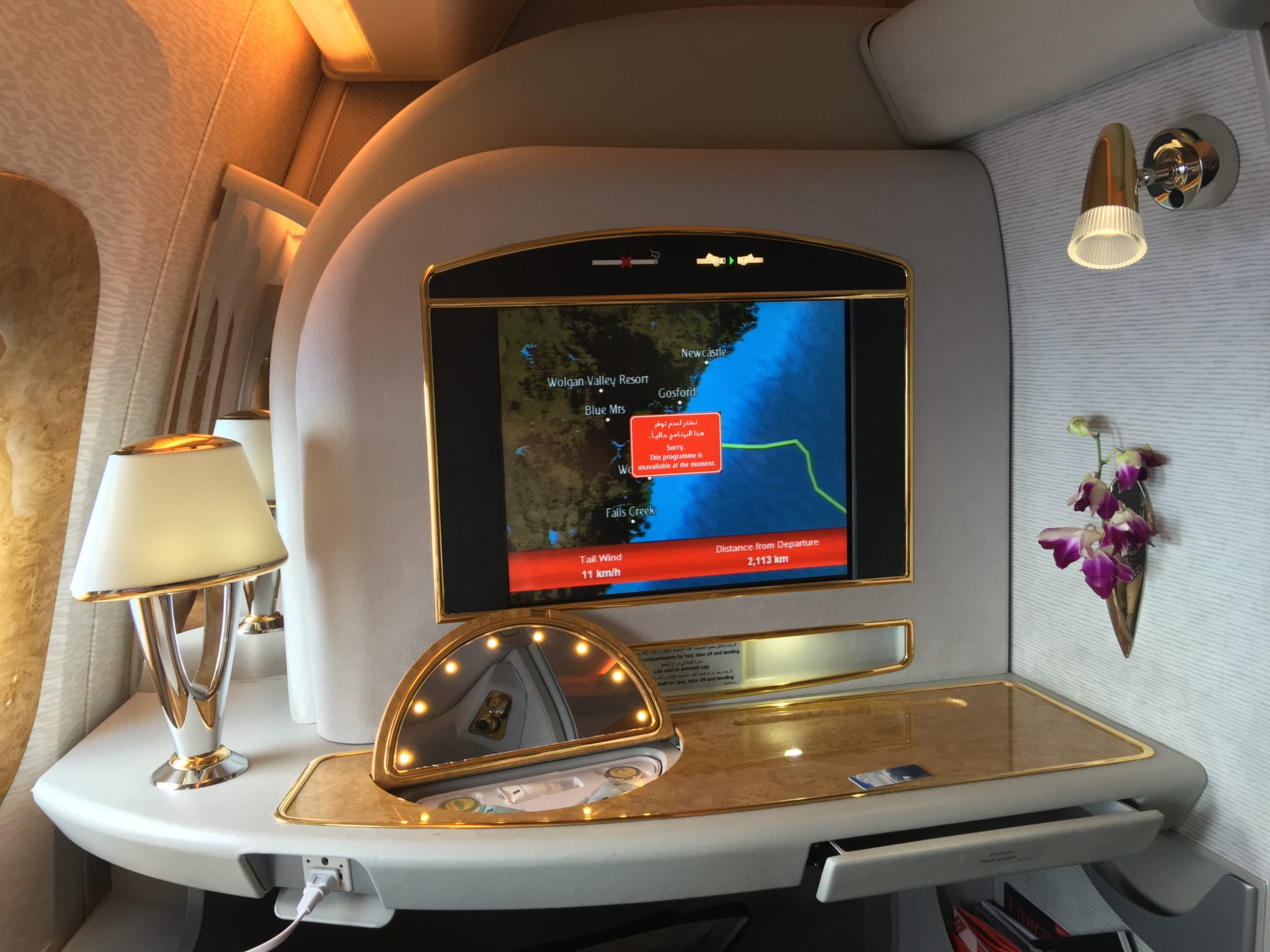 Despite the idiosyncracies of this older product, I thoroughly enjoyed it. Image: John Walton

Yet I was surprised how quickly I, no fan of the Emirates design bureau’s philosophy of “More Faux Walnut Good, Less Faux Walnut Bad”, found that it grew on me, and I’m fairly certain that it wasn’t the freely flowing Dom Pérignon talking.

It was a mixture of the comfort — this seat is infinitely customisable and works particularly well in Z-bed recliner positions, something that can’t be said about all first class seats — and the slightly retro feel. (The retro feel was somewhat akin to discovering last year that 1980s music is now played on “oldies” radio stations: you can’t quite believe it, but it happens.) 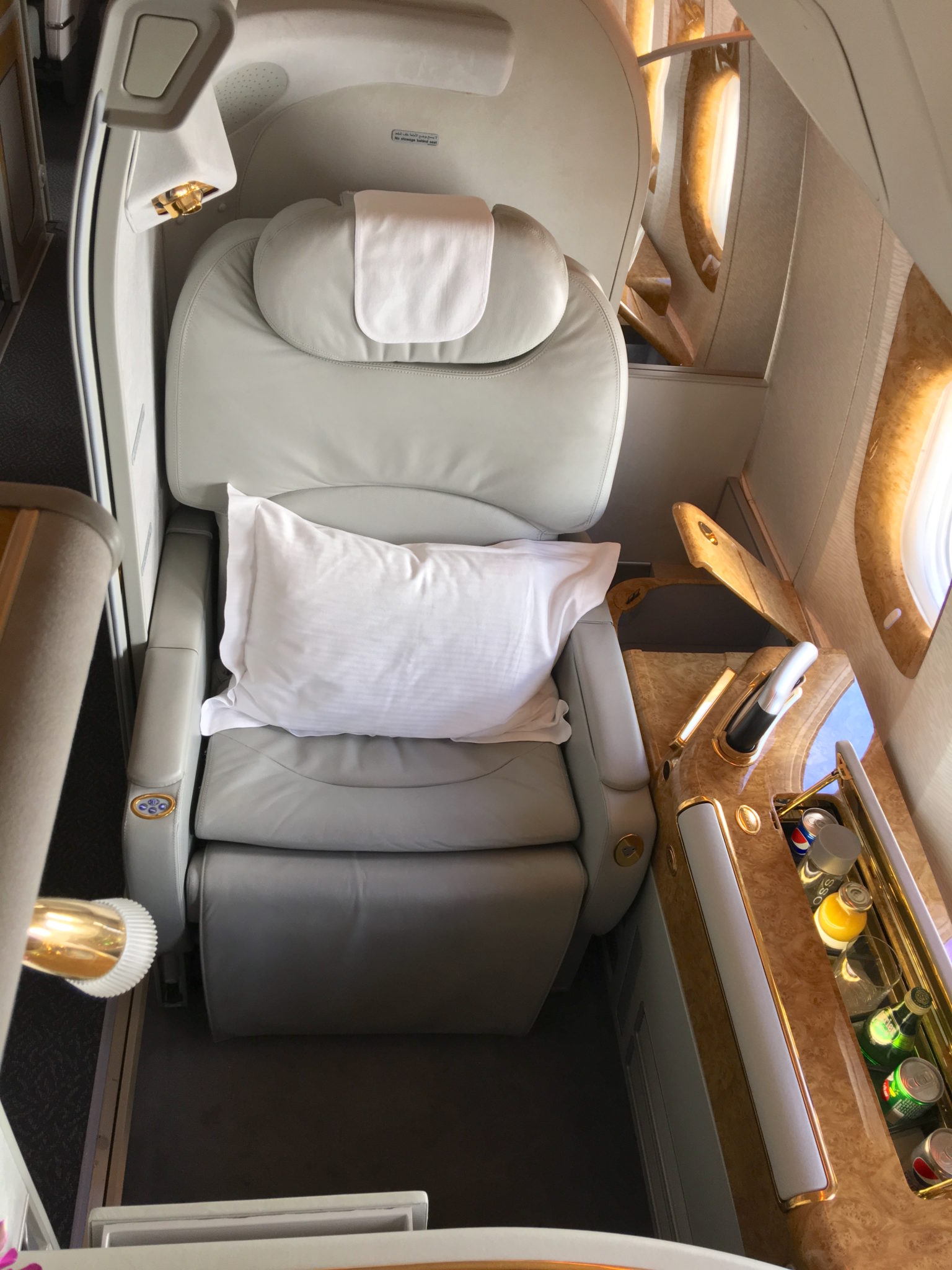 It’s not a revolutionary product, but it certainly is comfortable. Image: John Walton

Even I was delighted by the automatic push-button window blinds and minibar lid, and that feeling of whimsy is always a delight on a plane.

Impressively, the Panasonic Avionics Ku-band wifi worked fairly well throughout. This is one of the most southerly routes that Emirates (or any airline) flies with the system, and despite a fairly high latency I was able to both post and view video.

Honestly I don't need to go past the first page. #thatjohnonek #paxex pic.twitter.com/MS00U9QZRM

The food and beverages were particularly impressive for this short flight: a delicious meal and a stonkingly good wine list, heated and plated well and served elegantly.

The downsides: entirely outside of styling, the suite is showing its age in terms of both inflight entertainment and at-seat power. While the IFE selection is as praiseworthily wideranging as ever, the user interface feels very clunky indeed, and not enough of the content is in higher definition formats. It was also buggy — the moving map had a notice that it wasn’t working for much of the flight, for example.

The USB socket wouldn’t even keep my iPhone 6 Plus charged, and the power socket was placed under the lamp, far enough away that it wasn’t possible both to use and to charge the phone.

(My mother, used to this sort of thing, travels with a 6-foot iPhone charging cable rather than the standard 3-foot version, but sensible positioning of power sockets needs to be a design priority.)

But what really made the flight: this particular Emirates crew was outstanding. A quiet word with the purser had the team focussed on helping my father to watch the live rugby (which, unfortunately, wasn’t working, but the IFE option of replays of the last world cup went down a treat) and also on creating a special “happy mother’s day” dessert plating with chocolate writing for my mother.

Above and beyond, though, were the fun Polaroid camera snaps the crew took of my mother, resplendent in one of the Emirates flight attendant hats, enjoying her time up front.

And it’s that kind of thing that makes for #PaxEx memories.

A “trickle up” approach to inflight dining may transpire