In a globalised travel world, clear and concise language for safety communications is more important than ever. First time or very irregular travellers are flying more and more, in both developed and developing countries. Passengers from countries where flying has not been as common as in more developed nations now fly frequently in and to Western countries, on Western carriers.

But do those airlines’ safety communications reflect the new reality and passenger mix? A case study from recent flights on Qantas, and empirical analysis of the language on that airline’s safety card, suggest that there is work to do.

In addition to the usual regulator-required pictorial images, safety video and crew demonstrations, Qantas provides a substantial amount of additional information on its safety cards, yet this text is at a highly advanced level and is presented in small print. 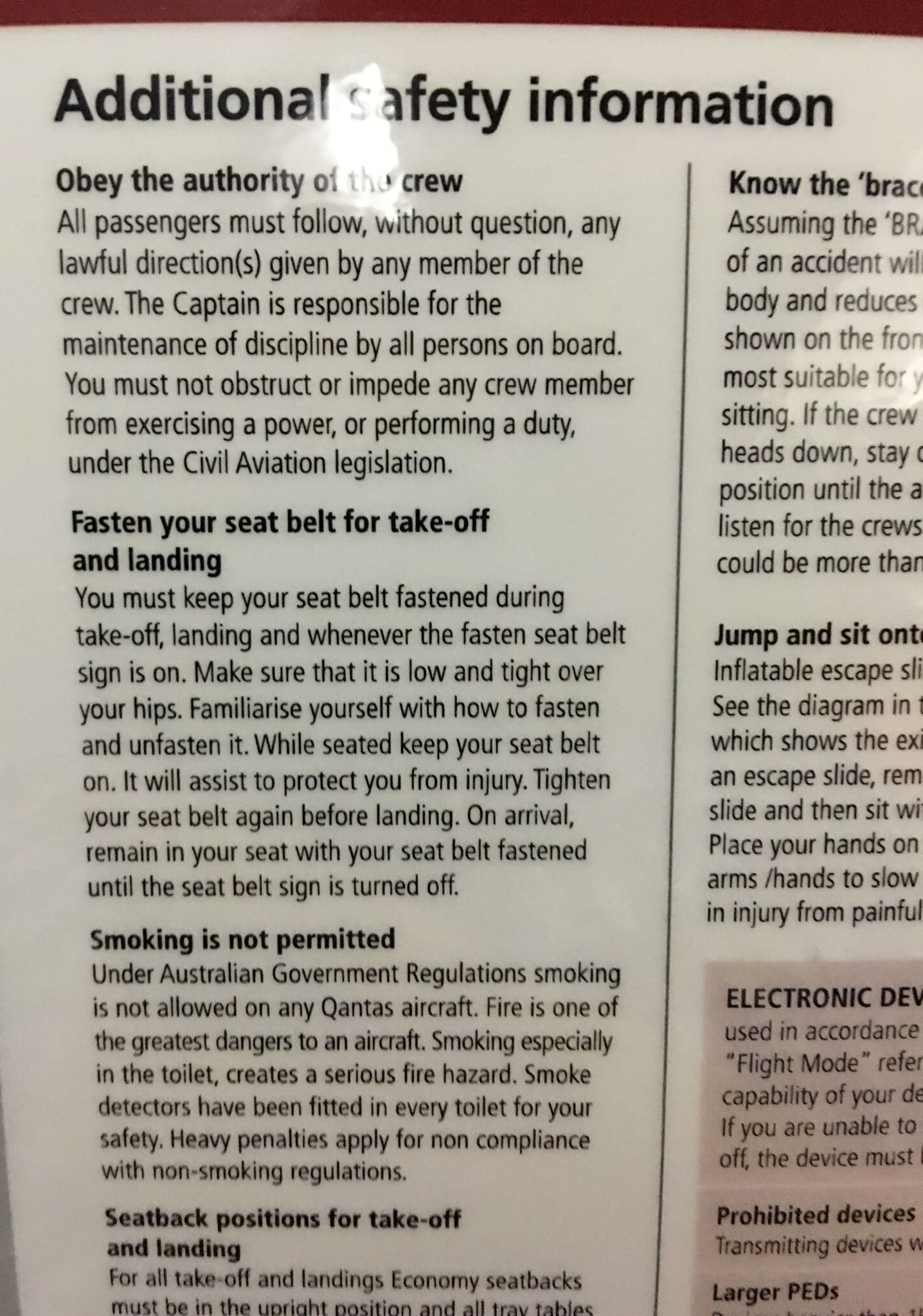 The information on Qantas’ safety card scores at university level of readability. This is a problematic level of language complexity even for native English speakers with lower levels of education on domestic flights. Moreover, according to the 2011 Australian Census, 23.2% of Australian households spoke a language other than English in the home. 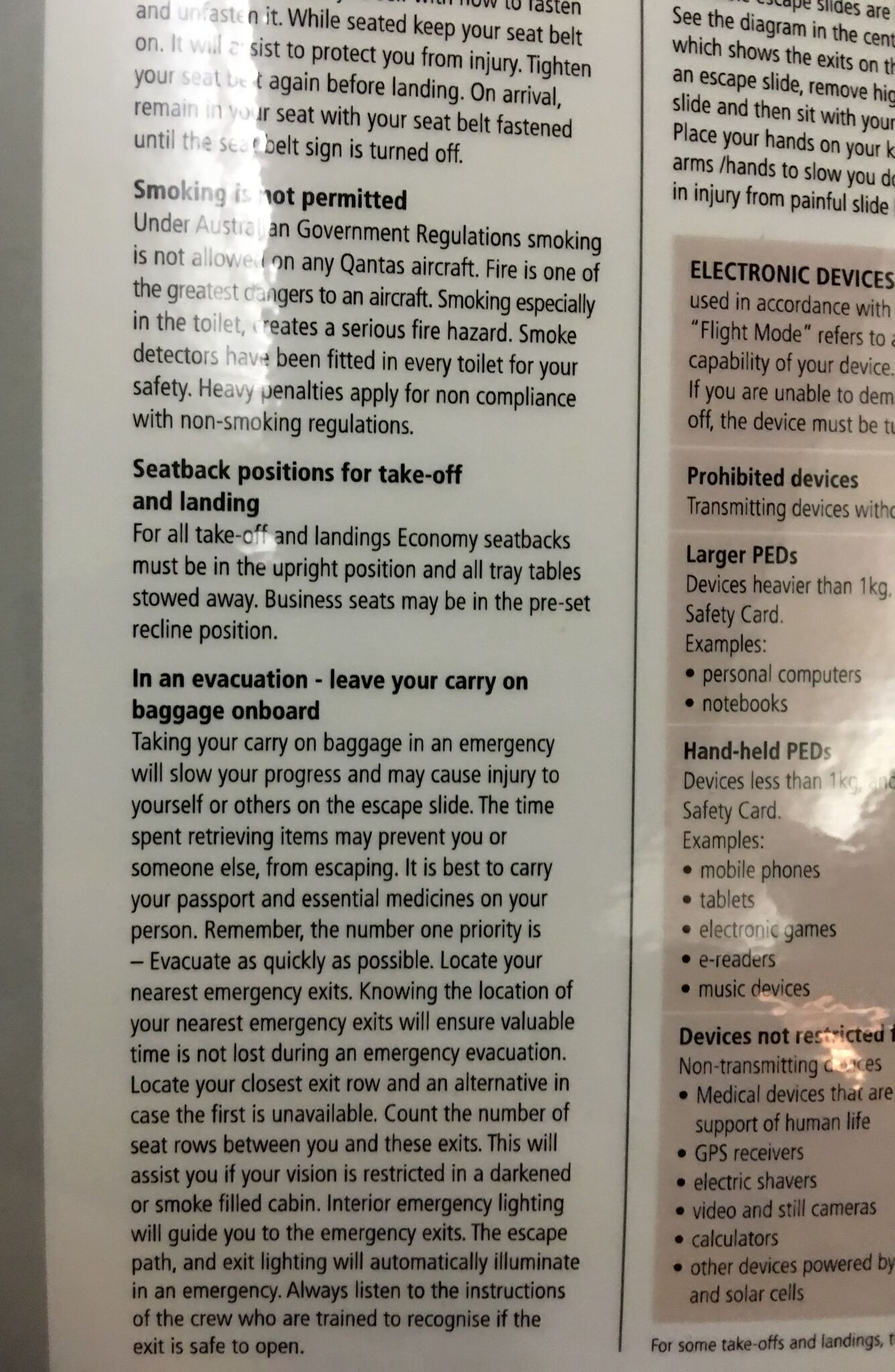 These text examples are from the safety card onboard the airline’s Airbus newly refurbished A330-200, which Qantas flies domestically and to a half-dozen Asian destinations, including Shanghai as part of a partnership with China Eastern.

Imagine a Chinese-reading passenger, flying through Shanghai on Qantas and transiting through Sydney, encountering the airline’s very wordy, complicated (and occasionally ungrammatically written) safety card on a domestic flight. While Qantas has language-qualified crew on international flights, there are no Mandarin announcements, no Chinese subtitles to the safety video, and likely to be no Mandarin-speaker crew on domestic services. 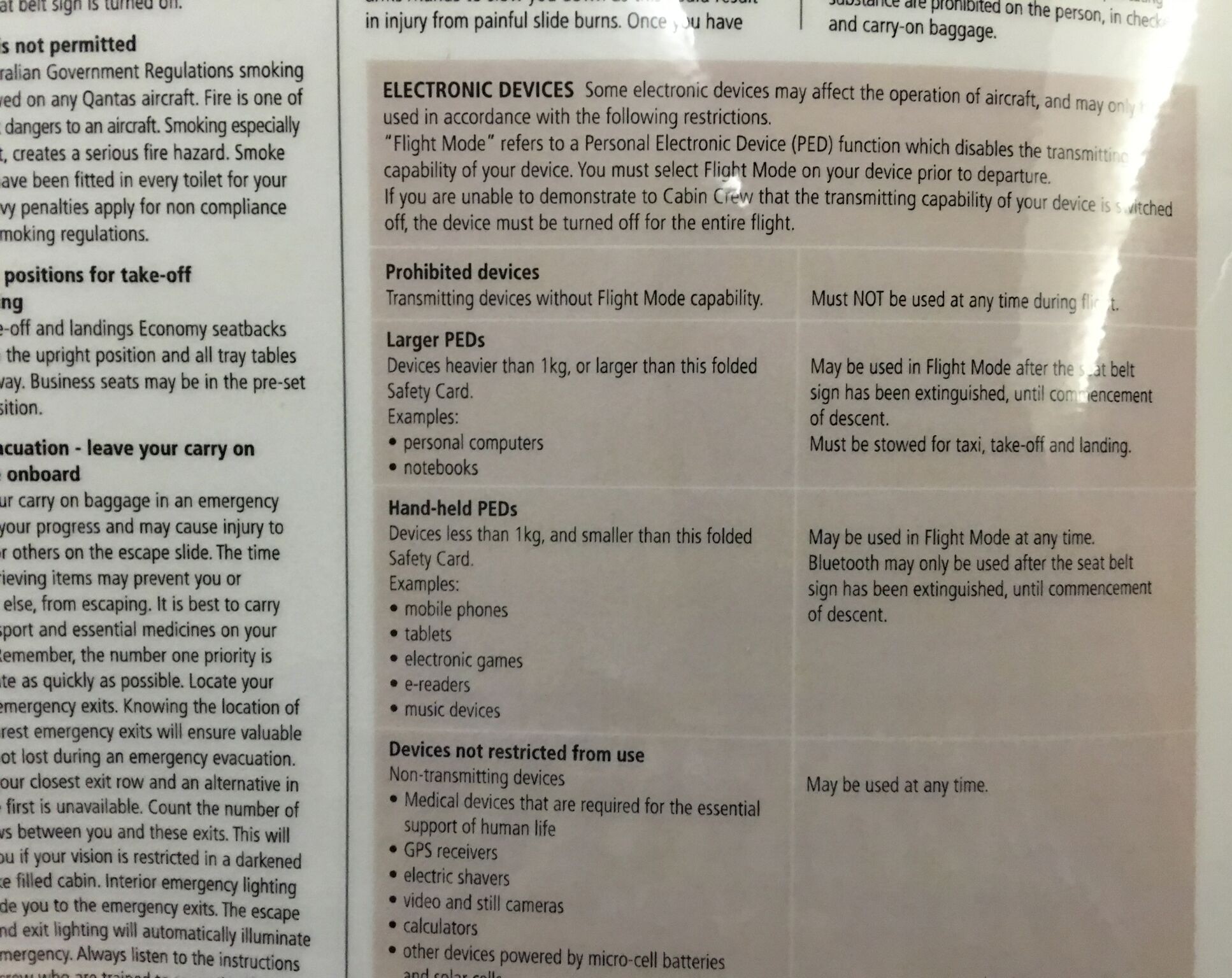 The paragraph below — about the importance of obeying the authority of the crew, which has been an issue in a number of high-profile incidents within China in particular — scores above the first-year university level according to two of the common methods for assessing readability.

All passengers must follow, without question, any lawful direction(s) given by any member of the crew. The Captain is responsible for the maintenance of discipline by all persons on board. You must not obstruct or impede any crew member from exercising a power, or performing a duty, under the Civil Aviation legislation.

(Throughout, RGN used the open-source Text Statistics engine to assess readability, which also provides information about the five test indices used to analyse the texts. Most of the tests give results in the US grade system, where high school students graduate after 12th grade, whereas SMOG refers to the years of formal schooling, as in Australia or the UK, where 13 is the last school year.)

The following paragraph, covering personal electronic devices, scores even worse: above the second year of university on two of the tests, and with an average of above high school level.

Some electronic devices may affect the operation of aircraft, and may only be used in accordance with the following restrictions. “Flight Mode” refers to a Personal Electronic Device (PED) function which disables the transmitting capability of your device. You must select Flight Mode on your device prior to departure. If you are unable to demonstrate to Cabin Crew that the transmitting capability of your device is switched off, the device must be turned off for the entire flight.

“Plain English” campaigns recommend a reading level of 8 or below for important information that must be universally understood. None of the paragraphs of the safety card we entered into the analytical engine was written to that level. Moreover, automated tests do not take into account the extra complexity added by comma clauses, incorrect grammaticisation, specialised vocabulary, Latinate language, or passive voice that the Qantas text uses.

Quite simply, it is hard to think of (and after reviewing hundreds of safety cards has proven difficult to find) a safety card printed with so much information, so densely, with so small a typeface size, and in such impenetrable language.

RGN consulted Dr Barbara Clark, a linguist and anthropologist specialising in miscommunication and safety, for her professional opinion on the text and the readability assessments we used to analyse them.

“If anything, I think most of the assessments are too weak,” Clark says. “These safety instructions have complicated syntax (sentence structure) and multisyllabic words which can impede understanding, especially for readers with lower levels of English proficiency. The size of the font is also problematic, and negatively affects legibility for readers with vision problems.”

Dr Clark consults with organisations to help them understand the causes of miscommunication and how to avoid it. She has worked with a range of organisations including the UK Civil Aviation Authority (CAA). After ten years working in the commercial aviation industry, Clark earned her PhD, which considered inflight safety and pilot/cabin crew team building.

“I would strongly suspect that the instructions that are currently printed on the Qantas seatback passenger safety card would be difficult, if not impossible, to understand for passengers with low levels of English proficiency,” Clark assesses.

“The words and sentence structure of the briefing card suggest legal language and create a barrier to understanding that does not need to be present in such a vital communication tool,” Clark continues. “Words like ‘legislation’, ‘impede’, and ‘alternative’ can be substituted for simpler synonyms (in this case ‘law’, ‘stop’, and ‘another’). Similarly, phrases containing complicated words and syntax like ‘performing a duty’, ‘exercising a power’, and ‘Australian Government Regulations’, can be substituted for ‘doing their job’ and ‘Australian law’.”

“Finally, some of the current Qantas passenger safety card information and instructions don’t need to be included,” Clark suggests, giving examples of ‘Remember, the number one priority is – Evacuate as quickly as possible.’ and ‘Fire is one of the greatest dangers to an aircraft.’

“Whilst this information may seem necessary for passengers to know, it does not need to be in the passenger safety card, especially in such complicated syntax — it can be included in a spoken briefing, or at check-in,” Clark explains. “A possible result of such unnecessary information on a card with other, more vital information is passengers with low English proficiency will not read or understand the really important information: listen to the crew and do what they say; the crew will help you; etc.”

“The tone and language is formal, and uses obscure, formal words phrases where everyday ones could be used (e.g. “obstruct or impede” instead of “stop”) and passive voice (e.g. ‘…smoking is not allowed’ instead of ‘You must not smoke’),” Price explains.

“For example, compare the difference between ‘Don’t drink and drive’ (straightforward and clear language, though non-native English speakers may not realise that this refers specifically to alcoholic drinks) and ‘Motorists are advised to refrain from alcohol consumption prior to operating their vehicles’ (use of rare, formal words like ‘refrain’, ‘consumption’ and ‘prior’, elaborate phrasing).”

Price sent RGN a slide she uses regularly to show academics three types of register commonly used in Australia. The first is a traffic safety sign used in the state of Victoria.

“It is astonishing how many documents aimed at non-native English speakers opt for the third of those registers — and if the listener clearly doesn’t get it, jump to the first,” Price notes in particular.

Price gives two examples of how Qantas’ safety card language needs to be improved to be more widely understandable.

Qantas is by no means the only airline that needs to consider the way that it presents safety information for the modern mix of passengers. But with much information in its safety card at an advanced and complex level, even for native speakers, it is an unusual case, and the expert consultants we spoke with note that there is clearly room for improvement.

RGN asked Qantas a detailed set of questions about whether Australian regulator CASA specified the format, size and wording. Qantas redirected the questions and would only say on the matter: “The on board safety card is required as supplemental information by CASA.”

However, a CASA spokesperson confirmed to RGN that “format, type size and wording is not set by us”. While the regulator “is supportive”, the spokesperson continued, Qantas is “going above and beyond what’s required on their safety briefing cards”.

The spokesperson directed RGN to the relevant 2004 guidelines, where the only requirements relevant to written printed matter (as opposed to diagrams) are:

Within the same regulation (CAAP 253-2(0) sections 3.1.3 and 3.1.5), CASA directs that written information should be minimised, and specifically warns against “a card that contains too much text”:

CASA’s response and its guidelines suggest that the decision on format, wording and print size are Qantas’ alone. Moreover, Qantas’ decision would seem to be in contravention of the CASA directions on minimising written information and not using cards with too much text.

In response to RGN questions about ensuring that passengers with a low level of English are briefed to the same standard as advanced English readers, Qantas also said that “during the demonstration, cabin crew look out for passengers who may have difficulty understanding the safety procedures and are able to give additional briefings if required.”

Qantas’ spokesperson did not explain how its crew are trained to spot the difference between passengers who were simply bored or tuning out with headphones. Nor did Qantas explain how crew on a 300+ passenger Airbus A330, which has a complement of approximately 10 cabin crew, are expected to each “look out” for individuals having difficulty with more than thirty passengers each. Nor did Qantas explain how busy non-language domestic crew would give additional briefings to non-English speaking passengers.