Panasonic Global 4D Weather is a remarkably powerful tool, the likes of which are only operated by governments, and then for wider-scale climate-type modelling and not for specific weather forecasting product use. Airlines and aviation will benefit early and greatly from the new models, which are already operating, the company’s chief atmospheric scientist, Neil Jacobs, Ph D, tells Runway Girl Network.

“Panasonic is the only non-government entity in the world running such sophisticated models,” Jacob said, noting that currently “only the Met Office (UK) and ECMWF [the European Centre for Medium-Range Weather Forecasts] are running models based on 4D data assimilation. Panasonic Global 4D Weather is extremely customizable, with higher overall resolution and forecasting frequency.”

How much higher and better? Jacobs used the example of October’s western Atlantic Hurricane Joaquin, where “our forecasted track for Joaquin was 80% more accurate, and [the National Weather Service’s forecasted track] took Joaquin into NJ/NYC and caused all sorts of unnecessary aviation impacts when in reality, Joaquin stayed well offshore.”

“The only real downside,” Jacobs noted, “is it requires more computational resources, which aren’t cheap. Considering the industry loses billions because of poor forecasts, the increase in expense for the gain in forecast skill is a great deal — assuming users actually act on the better information.” 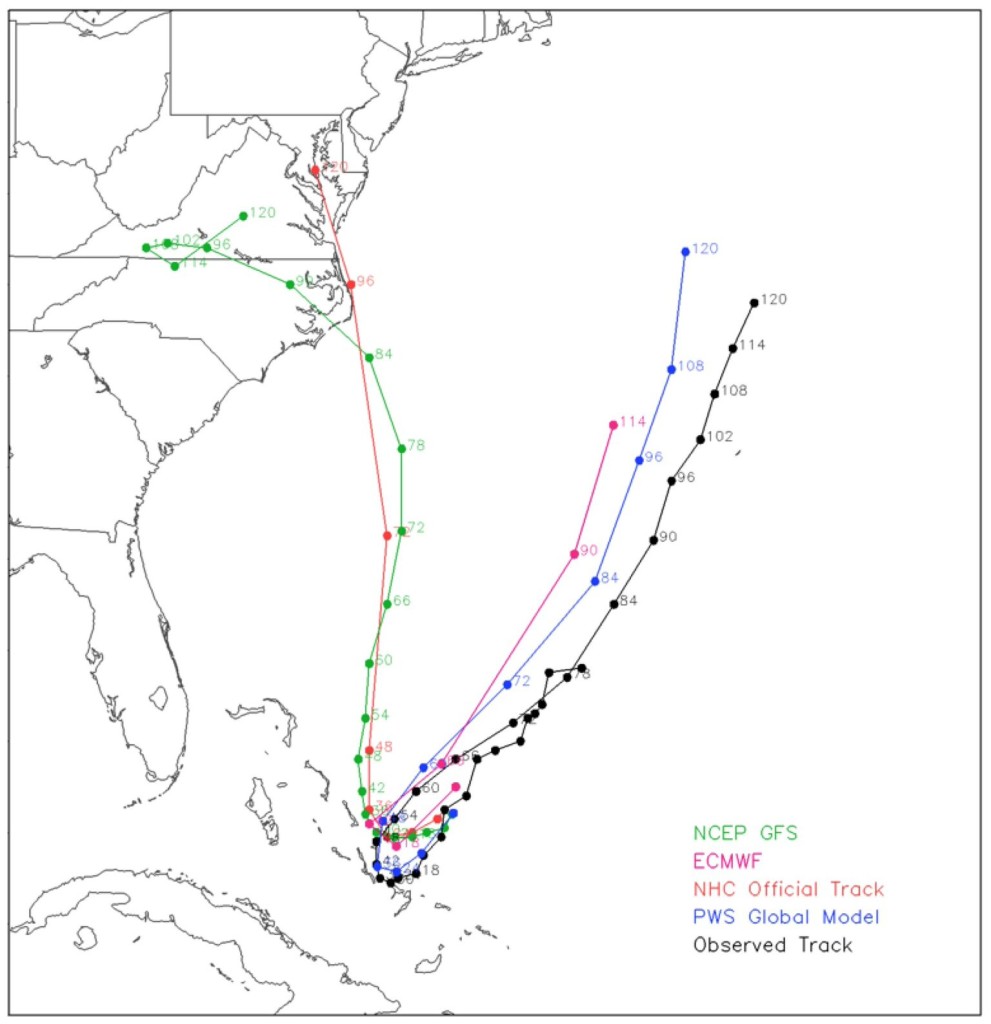 “Better weather-related decision making” is the name of the game, Jacobs reiterated, noting that aviation users will be among the first to benefit — and will see some of the greatest changes. “For everyday use, the main value is inflight optimization based on winds, icing, convection, turbulence — mainly trajectory based operations, passenger comfort, fuel savings. For major weather events, both the airlines and airport ground operations can get a better idea on how to manage everything from overnights, preparation and deicing to rerouting and runway management like snow plows.”

Jacobs also promised “enhanced forecasting around airports to improve airlines’ ability to predict operational issues and minimize delays. For aircraft flying around the globe, high-resolution wind grids enable greater climb, en-route, and descent optimization tools for airlines than available anywhere else in the market today. Additionally, Panasonic Global 4D Weather will power our 4DAero electronic flight bag weather application. It is one of many feeds into the 4DAero solution. TAMDAR, balloons, and hundreds of other data feeds from satellites to ships and buoys. There is no data source that the government met centers have that we don’t use.”

Numerous airlines’ aircraft carry the small TAMDAR sensors that make up one of the types of feed, including US Alaska-based regional carrier PenAir and Icelandair, which quips that its Reykjavik base is essentially an aircraft carrier in the North Atlantic, enabling a significant amount of TAMDAR data to be collected at regular intervals. All of Panasonic Weather Solutions’ data customers will ultimately use the Global 4D Weather product – it’s the same system when the product arrives, it’s just better resolution and more accurate.

Already, Jacobs noted, “some airlines are using our convection forecasts to proactively request new routes. They are also using our wind grid forecasts for continuous descent approaches and cruise fuel optimization. They can actually use the Satcom we install on the planes to both downlink weather observations as well as uplink new forecast information, and this is works anywhere on the planet even polar and open ocean. Another airline is using our forecasts at their hubs to manage ground support from everything from de-icing plans to ground ops crew overtime scheduling during storm events.”

Global 4D Weather will also enable “numerous flight optimization, air traffic management, air traffic control, and airline planning, and hazardous weather mitigation applications, including the planning for serious convective events, tropical storms, hurricanes, typhoons, and snow. There will be both gridded data, as well as plots and graphical imagery in the form or static plots and animations. The animations will be user-adjustable, and can be linked to flight plans, routes, et cetera,” Jacobs said.

“Coverage is truly global and uniform with the ability to increase resolution quality in desired domains of interest anywhere in the world,” he added.

Enabling much of the improvement is a new supercomputer that Panasonic calls Sora (Japanese for ‘sky’), located in an Orlando data center.

“It is an 11,000 core Linux blade high performance computing cluster with 3GHz Ivy Bridge processors and FDR [Fourteen Data Rate] InfiniBand interconnects,” Jacobs explained. “It is (to my knowledge) the most powerful system in private industry used to forecast weather.  There are a couple government agencies like ECMWF that have more powerful systems, but they also use most of their power to run climate models, not actual weather models like the airlines would be interested to use. Additionally, all of our models, from global to regional, are built to output variables on flight levels, which is something government models don’t do. This is very useful to the airline industry.”

Moreover, Panasonic Global 4D Weather “provides a an enhanced, flexible, and scalable platform from which we can generate custom output datasets, including varied resolutions and forecast frequency in various areas of customer interest around the world.”

Resolution is important, Jacobs said, because “the model needs to resolve features like mountains, lakes, urban areas, or even thunderstorms to enable it to predict how the weather will interact with them. For example, you can’t model how wind will flow around a mountain that is 10 km wide if your model has 15 km resolution — it wouldn’t even know the mountain was there.”

While Panasonic Global 4D Weather is already operational, the Panasonic executive noted, “our older models will run in parallel for about 12 months. The end user won’t notice the switch from a file format compatibility perspective. The output format will be the same, but the actual forecast (file content) will be more accurate.” 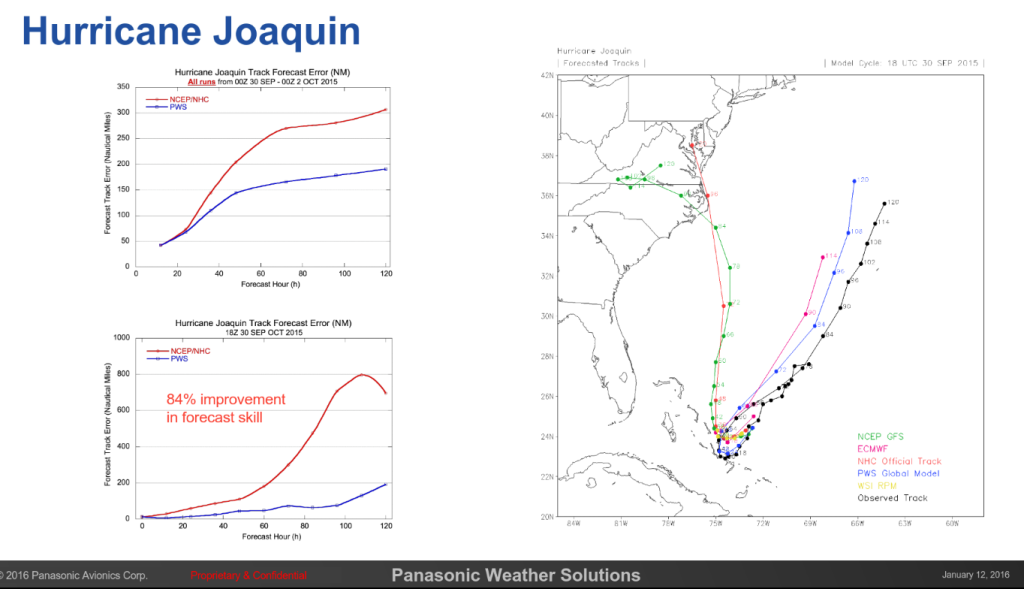