The first reconfigured JetBlue aircraft will join the fleet in July 2016 but it is not what was previously announced. It will be a new delivery, all-economy A321 featuring 10 more seats – now 200 in the A321 “core” configuration – and the Space-Flex v2 galley/lavatory arrangement. This is the first indication from JetBlue that the A321 fleet will see the layout changes that were previously announced for the A320s. Seat pitch on both types will be 33″.

The smaller aircraft will still be retrofitted as well but not until early 2017,  rather than late 2016. And the A320s will actually add fewer seats than previously expected; the new layout will hold 162 passengers rather than the 165 management promised to Wall Street in November 2014. These are just a few of the details the company is sharing this week as it moves forward with its first major fleet retrofit program in the 16 years it has been flying.

In an industry where every inch on board is highly prized, mostly for squeezing more passengers in, dialing back the 165-seat layout to only 162 raises one huge question, Why? Jamie Perry, VP of brand & product development, spoke to RGN about the compromises the carrier had to make in putting together the final A320 layout for the new design, and how it ended up slightly less dense than initially anticipated.

We had to optimize the various issues, the most seats, the most storage space, the most work space, the most seating space for crew, the best access to lavs for the customers; all these things are not necessarily pulling in the same direction. The best combination overall is with slightly fewer seats than we previously spoke about. The goal is to provide the best customer experience whilst also providing a good experience to our crew, both to work and to sit & commute.

Perry suggests that there are challenges with respect to regulatory requirements, such as jumpseat mount points, as well as the ever growing need for the carrier to stock more supplies on board, both for the free snacks and drinks JetBlue has incorporated into its branding, and for the buy-on-board offerings which are expanding later this year.

The A320s today have more items stocked per flight than the current galley can handle so the additional storage realized through removing the three seats from the design will help on that front. This scaled back rollout of the Space-Flex v2 design is the second recent announcement from a carrier that it will not be using the kit to the full density advantage it offers, perhaps signaling that the industry is settling on a new limit for what the maximum viable squeeze on an aircraft is.

The A321 core aircraft will be retrofitted this year, with a target timeline of completing the work in the window between the peak summer schedule and the beginning of the Thanksgiving holiday uptick. Because the A321 core fleet is small, the company is confident it can complete the work in that time, allowing it to sell to the full capacity for the higher demand winter schedule period. For the A320 fleet the deployment timeline is rather longer. The work will start in early 2017 and continue into 2019. This presents a number of scheduling and booking challenges for the carrier, especially as it does not typically overbook flights as a matter of policy. 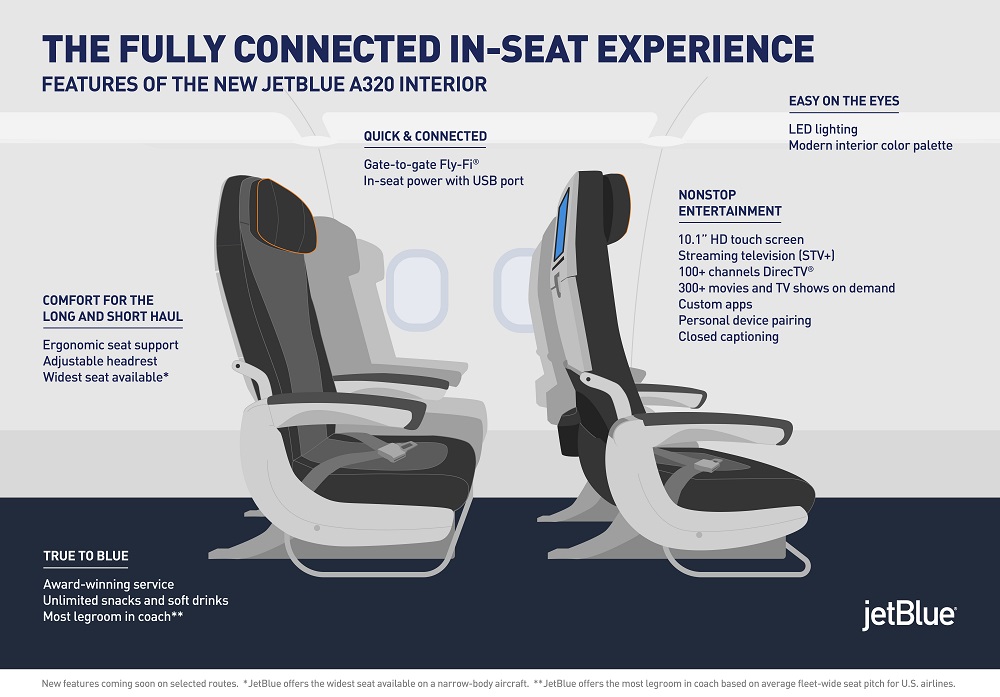 The challenges are both technical and logistical. Once a plane has the additional seats it must be staffed with an additional flight attendant, even if it is only sold to 150 passengers to accommodate for swaps. Either selling all flights to only 150 seats for the two years or staffing all flights with the fourth flight attendant for two years would not be financially practical. The company is working to bring the retrofitted planes online in “batches” even though they will be converted serially through the project window. Perry describes the challenge of the migration:

We’re working with the industrial engineers how we bring the [retrofitted] aircraft online in batches so the subfleet changes in size a limited number of times. You need to know which flights are going to be operated in the new configuration so you can sell and staff to the new configuration. It is quite a complex piece of modeling being done right now to work out how we bring them online sooner than waiting to the end but not in a way which makes the operation overly complex.

The cabin redesign also presented an opportunity for the carrier to replace the overhead bins, upgrading to the latest Pivot Bin model from Airbus. JetBlue has not made a decision to move forward on that front yet with Perry noting that the company is “underwhelmed with the capacity uplift that the pivot bins provide to the point where we are still working through our options.” The biggest challenge on this front is with irregularly shaped and packed carry-on bags, something JetBlue sees a significant number of with its high proportion of VFR traffic to the Caribbean islands. Such bags reduce the value proposition of the new bins given the engineering plans which depend on consistently sized passenger bags.

For the A320s the new cabin also means an upgraded entertainment kit, including 10″ HD screens plus power outlets at each seat. The STV+ system for the A320s is a new product from Thales; JetBlue is the launch customer for the system.

The new cabin layout for the JetBlue planes is not what the company had previously indicated but that’s almost certainly a good thing, both for passengers and for crew.

Thales STV+ set to fly on JetBlue’s A320 fleet