I’ve long been of the opinion that Air New Zealand offers one of the best business class products for an overnight flight — the kind of leg that makes up the majority of the airline’s longhaul services. I find the flip-over seat ideal: after a decent meal, just ask the crew to make it up while you change into PJs, and then flop into a memory foam mattress topper for a fully flat sleep on a surface made for sleeping, not for sitting.

Having examined the refurbished Boeing 777-200ER version of this cabin in April, I’ll be focussing here on the way that the Dreamliner cabin, seats and other #PaxEx features differ from the previous implementations of the Business Premier product.

Let me be clear up front — the lower cabin altitude of the Dreamliner was noticeably wonderful, the LED lighting made me grin with how fantastically cool it was to bathe the entire cabin in purple light on boarding, the foam mattress was as comfortable as ever, and Air NZ’s food and beverage was everything I’ve come to expect from one of my favorite airlines to fly.

But there was a significant difference: the narrower Business Premier seat, driven by the size of the Dreamliner’s cabin. On flights that are approaching the ultra-longhaul stage length, this is a tangible issue.

To the left: the LED-lit Dreamliner seat. To the right: the same product on the refit Boeing 777-200ER. All I’ve done to these images is crop them, improve the lighting, rotate the 777 one slightly, and flip it horizontally for an easier comparison. 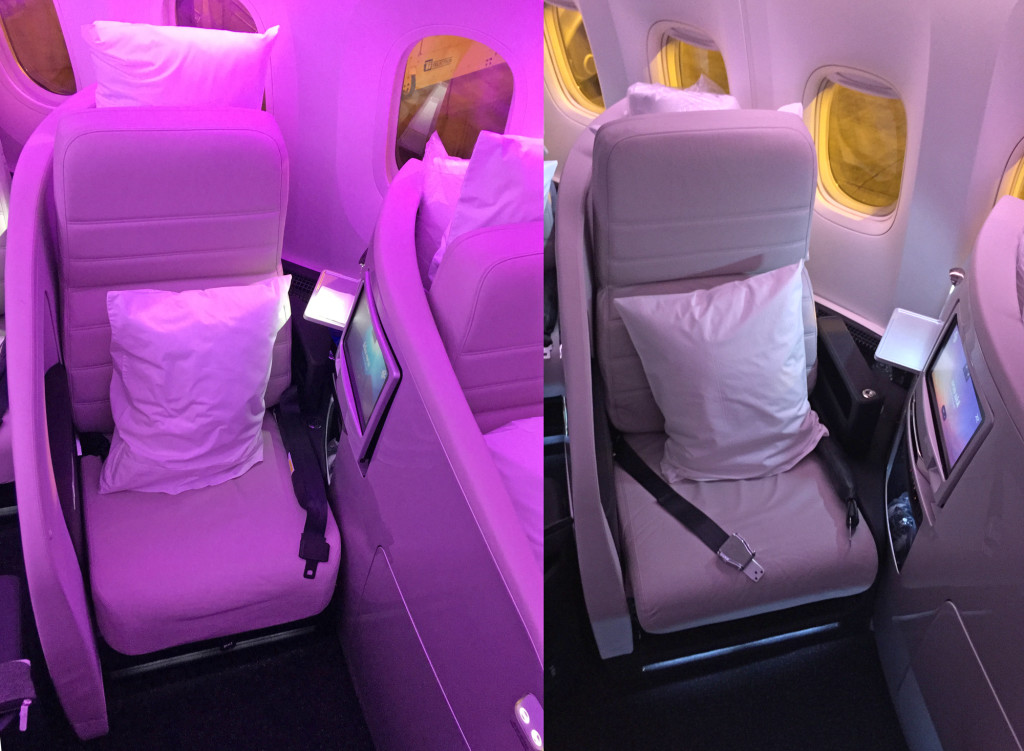 Comparing the two seats, it’s clear there is markedly less room on the Dreamliner

With a full cabin and a hectic departure, I didn’t have time to measure the seat, but it is clear that the Dreamliner implementation of this seat gives markedly less room than its previous incarnations on Air New Zealand’s 747 or 777 cabins.

It felt nearly as narrow as the version on Virgin Atlantic’s Airbus A340, and the difference between the two Air NZ seat sizes was very noticeable, particularly at shoulder level. I’d estimate the difference at somewhere around six to eight inches

I certainly wasn’t the only person I heard muttering about the fold-down cocktail table being right behind their left shoulder rather than within easy reach.

This affects more than just shoulder room. One of the key benefits of the larger seat for front-sleepers was always to be able to sleep on pillowed arms, with elbows sticking out into the shoulder space once the seat flipped down. That’s no longer possible — I checked. On the plus side, it didn’t feel any shorter in bed mode. 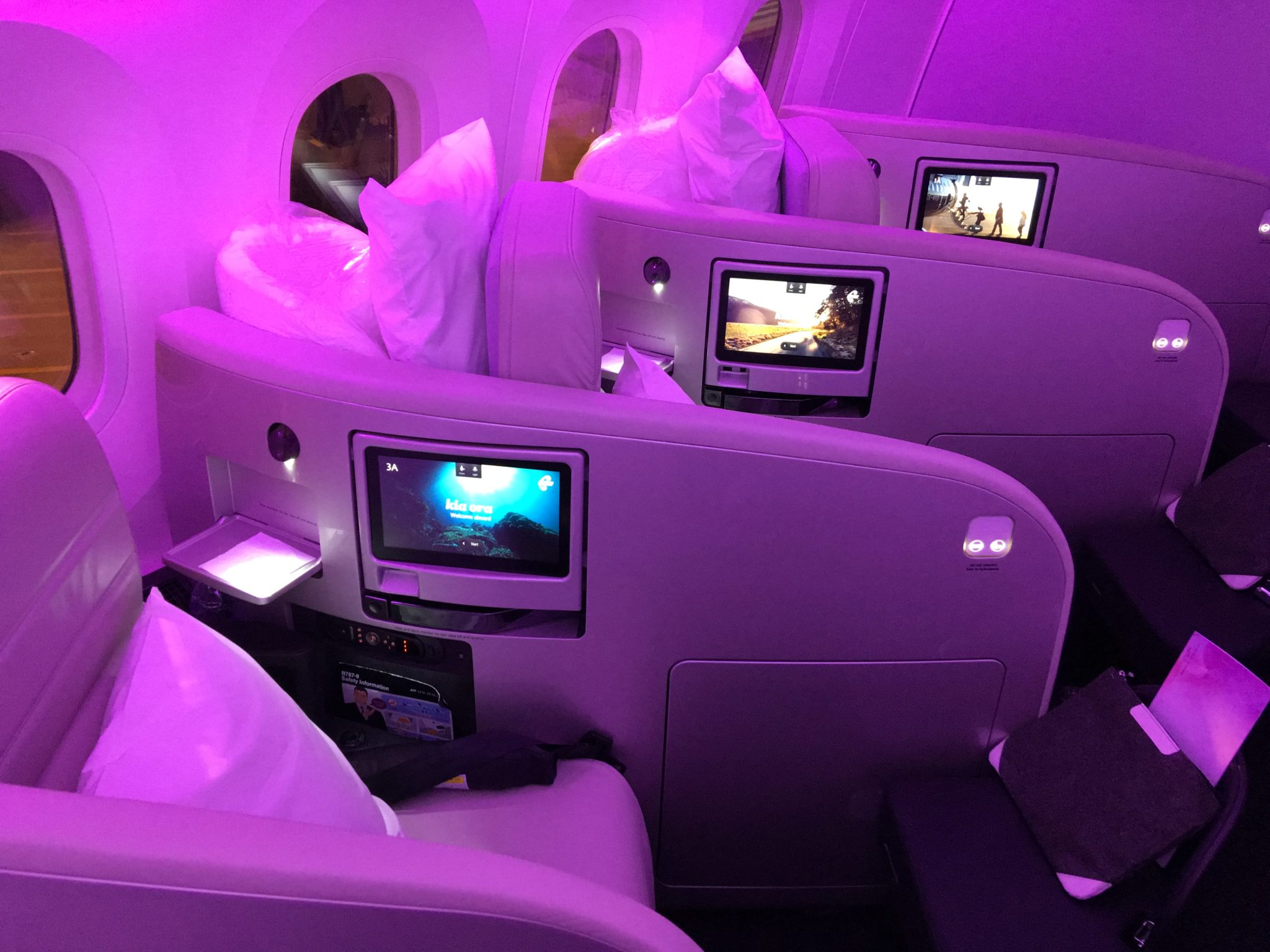 It’s still a very private seat with the divider walls, particularly in the A seats

The narrower seat, and the lack of the shoulder space seat mode, also removes the ability to keep a small handbag, shoulder bag or small personal item next to you during the flight. Previously, you could pop your washbag or the amenity kit to you in case you needed lip balm during the night, or wanted to keep your phone in a bag to stop it from potentially slipping behind the seat. That’s not possible either.

This narrower product is a shame. I’ve always liked it for the kind of twelve hour overnight that is a key part of Air New Zealand’s network. The first time I ever flew Air NZ’s version was a 26-hour direct flight from London on the 777-200ER with a stop in Hong Kong — a flight that itself has fallen by the wayside — which I still talk about as the best ultra-longhaul flight I’ve ever taken in terms of feeling refreshed on arrival.

Even with the reduced cabin altitude of the 787, and the great Kiwi service that is Air New Zealand’s trademark, it’s hard to get past the smaller seat on the Dreamliner. 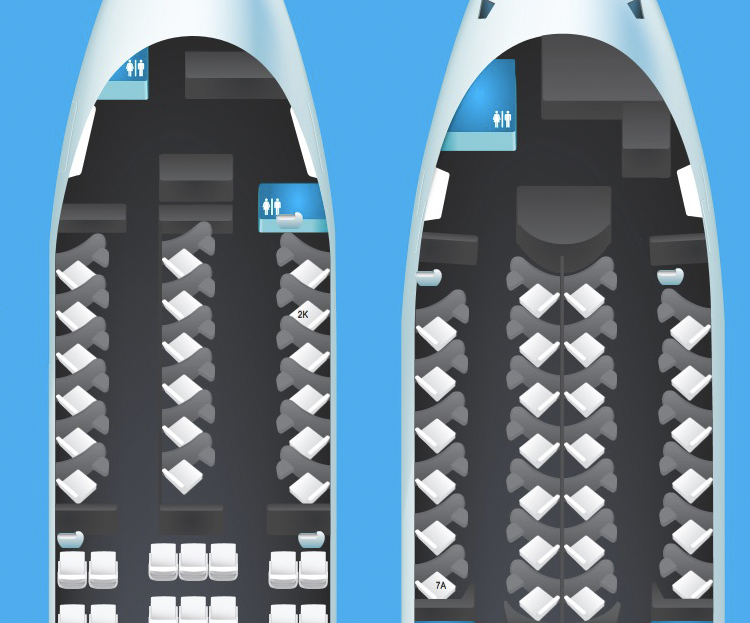 Comparing Air New Zealand’s seatmaps (787 on the left, 777 on the right), the initial differences are clear

What to expect with Lufthansa wireless IFE