Emirates is once again pushing the boundaries of commercial aviation with its 617-passenger Airbus A380, delivered this week and unveiled at the Dubai Air Show. Even with nearly 80 more passengers more than the 538 of previous A380 record holder Air France, Emirates’ high-density super jumbo isn’t even starting to approach the 853-passenger certification maximum for the A380. But Emirates’ new variation on the aircraft will bring challenges to airports — and especially to the airline’s premium positioning for its business class services. The high-density A380s will initially operate to Copenhagen and Bangkok, with Kuala Lumpur following in early 2016.

In terms of how the pieces fit together inside the high-density A380, Emirates has replaced the forward section of the upper deck — currently occupied by its first class suites — with 120 economy class seats in a 2-4-2 configuration, which is the standard for the A380 upper deck. In this layout, seats are pleasingly wide and very comfortable indeed.

On board the first 2-cabin A380 from @emirates at #DAS15. Giant screens on these economy seats. #paxex pic.twitter.com/f4VTUtRpjs

The first class showers are gone as well, replaced by larger lavatories for the upstairs economy cabin. That cabin is starting to feel very premium, even if Emirates itself doesn’t call the section “premium economy”. While neither Emirates nor Qatar nor Etihad have premium economy plans, the location of this cabin, the opportunities for elite recognition, and the chances for ancillary revenue will give Emirates a head start if and when the first Gulf carrier moves. 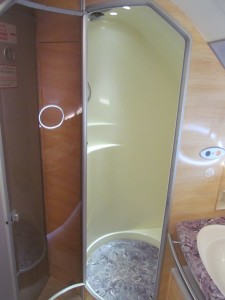 To start with, window seat passengers have the benefit of a side bin for storage and as a surface to arrange their effects. Together with the two fewer passengers in each row, that makes the upper deck cabins a prime location, although most airlines’ upstairs economy is located to the rear of the cabin.

Some airlines choose to make this section a no-babies cabin, while others give priority seating in the area to frequent flyers or passengers flying on more expensive economy tickets. With none of the three Gulf carriers approaching premium economy, is this a way for Emirates to start to dip its toe into the lucrative waters of ancillary revenue and potentially even a premium economy cabin?

The airline has certainly gone big on the inflight entertainment, with markedly larger touch-sensitive screens, magnetic headphone jacks, AC power sockets, USB ports and a touchscreen remote control. These improvements are also seen throughout the downstairs main A380 cabin:

The 58-seater business class — down from 76 seats — fills the rest of the A380’s top floor, with Emirates’ bar at the back of the cabin as it is on the three-class A380. While the airline will clearly have thought through the option of moving business class forward for noise and prestige reasons, having the business class cabin in the same space throughout will be a smart move to ensure fleet commonality and save the need to change the inflight service rhythm in business.

Service with a smile on the new @emirates type 2 A380, first stop Copenhagen #DAS15 pic.twitter.com/jx6xxkqp08

Unfortunately, Emirates has not taken the opportunity to update the garish faux walnut throughout the business class cabin to a look that is more tasteful and modern. With remarkably restrained business class cabins unveiled onboard the A380s of competitors Etihad and Qatar Airways, this is a disappointingly missed opportunity. 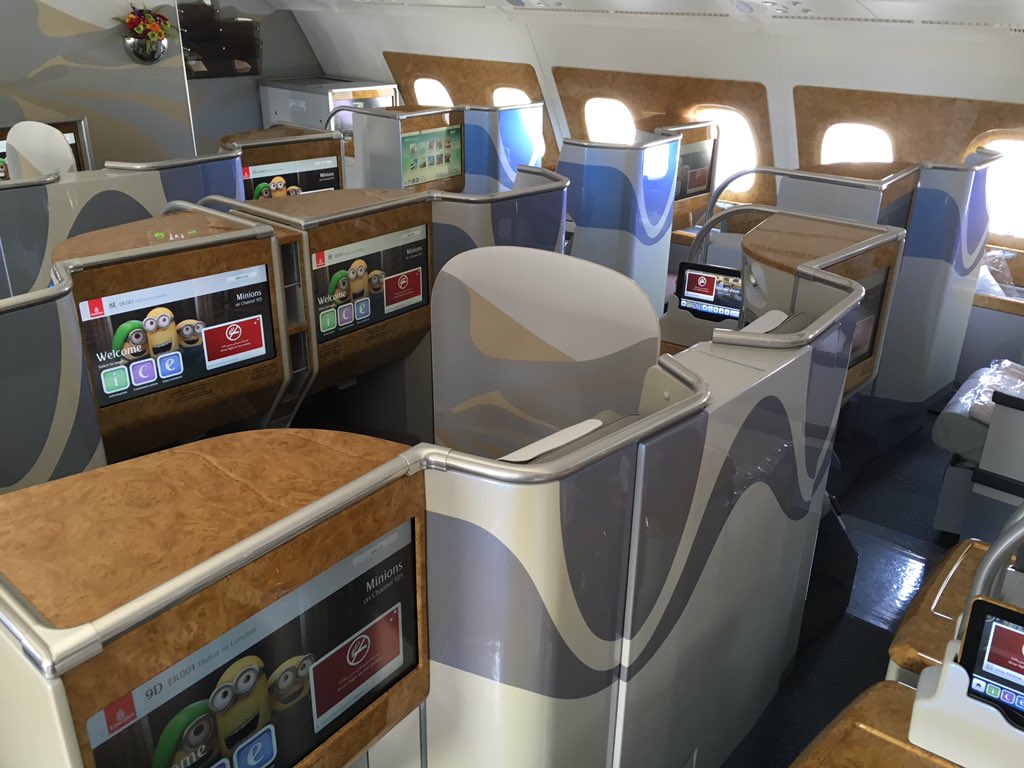 Overall, though, the most likely downside of this aircraft will be the ground experience. It’s a rare airport where boarding 615 passengers isn’t chaotic, and while Dubai is one of the best facilities thanks to its all-A380 pier, the outstation airports where Emirates operates still have the heads of the queues at the same boarding gate on the same floor. Adding eighty passengers to the mix won’t help.

Regardless, breaking through the barrier of six hundred seats on board a commercial airliner is no mean feat. Congratulations, Emirates.

Sundance sensation Me and Earl is the real deal