Suitcases are getting smarter, with several of them now offering features like integrated batteries for travelers to recharge their devices or even integrated tracking so smartphones will provide an alert when the bag is dispensed on the belt. But none of these new bags have integrated into the tracking systems the airlines use. Until now.

Lufthansa and Rimowa have launched a new electronic bag tag option which will bring digital bag tagging into the airline world, allowing the bag tagging to be managed by the passenger via an app and delivered directly into the airline’s systems at an airport bag drop facility. 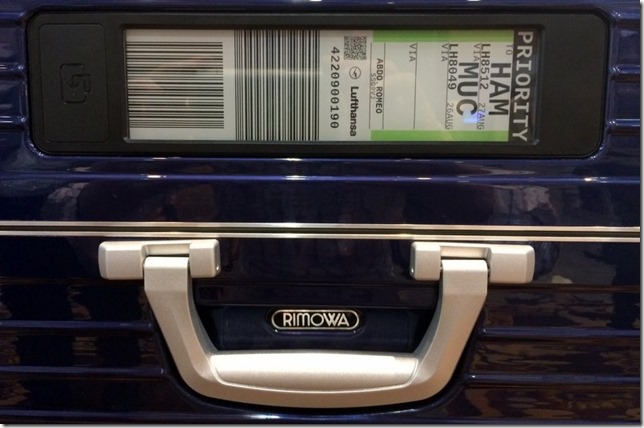 The key to the partnership is the Rimowa Electronic Tag, the digital e-ink strip that is integrated into the bag frame. The electronic tag is hardened against extreme temperatures, moisture and impact.

Speaking at the recent Future Travel Experience industry conference, Sven Lepschy, Rimowa’s project coordinator for the new offering, explained that the bag would break – something Rimowa luggage is renowned for not doing easily – before the tag would.

The tag is updated for each trip via integration into the Lufthansa App. Press a button on the inside of the suitcase and then on the app, and the digital tag updates to show the flight details just like a paper tag would, but without the risk of it getting smudged or ripped off the bag.

The digital tag can even work on itineraries that involve multiple airlines (so long as Lufthansa is the first carrier) because the information is displayed in the industry-standard format, though other airlines have not yet signed on to allow their apps to program the tags.

But what is the value proposition of these tags? What will convince travelers or airlines that it is worth spending some amount of money to use a digital bag tag, either integrated into the luggage or attached via a strap, rather than the traditional paper option? This question came up during the conference and views were split. The experts on stage suggested that the price point would need to be nearly free to convince passengers to adopt as there was no truly compelling feature the digital tag offers.

Separately from that, however, the moderator of the panel suggested that a price point of $50 was reasonable. Stephanie Taylor-Klag of airline lobbying group Airlines for America offered up this price point after the conference, suggesting that the digital bag tags give passengers more “control over their journey” and that some would pay for that benefit.

@WandrMe Pax surveys in the USA say $50/tag is the sweet spot…only time will tell! (but there's not much time left before they launch!)

@WandrMe Innovation comes @ a price. It's not 100% the tech (though new/fancy draws customers) but also about pax control ovr their journey

After a bit of pressing, RGN was able to connect with the company that conducted the focus group research that came up with the $50 price point. Unfortunately it was unwilling to share any of the details surrounding the study, including what was promised to travelers in terms of benefits the tag would deliver or even how many potential travelers were involved in the research. But it is standing by the numbers and prepping to sell lots of hardware. No specific airline partners were named as part of those plans.

And thus sits a major question facing the industry: Is there a sufficient value proposition driving such advances? At this point, the experts have not offered up much beyond the “cool factor” to make the tags compelling.

RGN Premium: (Update) Airbus, in its own words