More than a decade ago, when Vonn Crosby, now 40, worked as the manager of the Burger King at Cleveland Hopkins International Airport, flight attendants were frequent customers.

“They were always so dressed up and so glam,” said Crosby. “I’d ask them where they were going that day and sometimes it was South America, sometimes Rome and sometimes Tennessee.”

It all sounded good to Crosby, who had yet to take her first airplane flight.

Encouraged by two cousins who were already flight attendants, Crosby showed up, with about 300 other hopefuls, in 2001 when Continental Airlines had an open call for flight attendants at an area hotel.

“Today initial interviews are done on-line with videotapes, but back then they sat us all in a ballroom, talked about the company and the expectations for the job and told us that group’s hires would be based in Newark, New Jersey,” said Crosby. “I got up and left. I said there’s no way a girl like me from Ohio is going to New Jersey.”

Crosby’s cousins convinced her to try again and she went on to ace the interviews and, after six weeks of training, became a flight attendant based in – you guessed it – Newark, New Jersey.

She now works for United Airlines as a Service Training Team Leader in Houston and was one of the instructors on duty when RGN visited the carrier’s training center there for a day in July.

United flight attendants get five weeks of initial training in safety, service and a wide variety of other skills and the class this author observed spent most of the day on the duties surrounding service for premium cabin passengers on longhaul international flights. 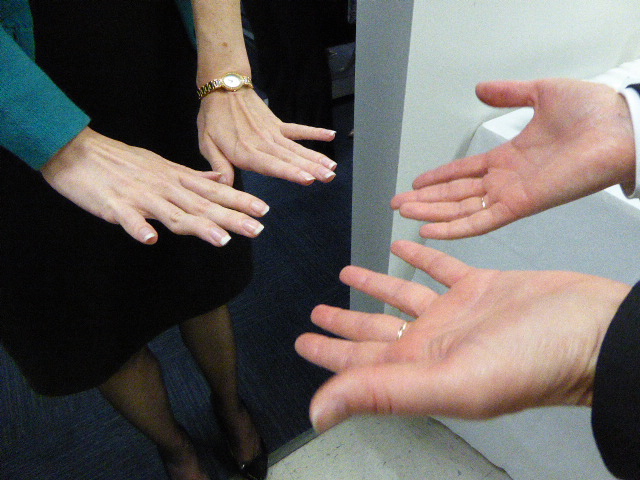 The day started with an appearance check. Flight attendants must dress according to a long list of ‘dos and don’ts’ that cover everything from how long their hair can be, what size earrings women can wear, where their name bar is positioned, whether or not any tattoos are showing (not allowed) and if they are wearing a working watch (required).

While looking great on the airplane is important, instructors reminded the class that on international flights – and in international airports – flight attendants not only represent United but also the United States. Always be gracious, they were told and “Be the brand”.

Much of the coursework on this particular day centered on familiarizing the trainees with the international premium class product, including the serving of a multi-course meal – using real food and beverages (but no wine) – that everyone in class could enjoy. Trainees received detailed instructions on everything from the proper way to set linens out on tray tables to how to correctly serve warm nuts, beverages, salads, main courses and cheese plates to first and business class passengers. 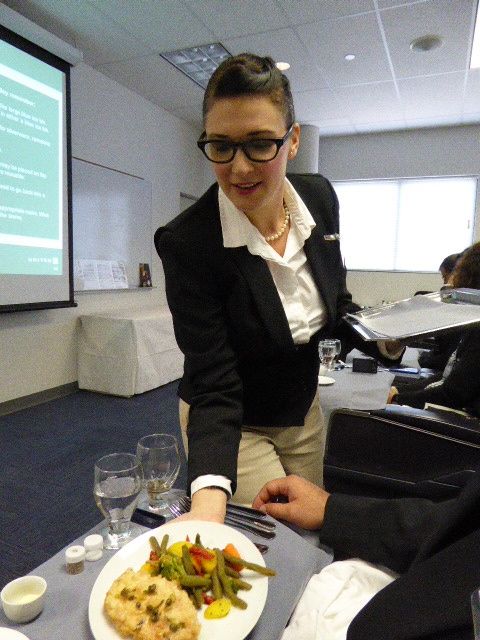 Also on the agenda: lessons in opening wine bottles and making ice-cream sundaes.

If anyone needed a refresher in any of these skills, or anything else they’d learned during their coursework, they were reminded that their service manuals were loaded onto the iPhone 6 Plus smartphones they’d all been issued, and are accessible on the airplanes or off.

Good timing and the ability to work as a team were among the skills emphasized during this session and, during a break, Vonn Crosby spoke about some of the other skills successful flight attendants should have.

Empathy, she said, is essential. “Flying is a draining experience and you never know what someone went through before they got to the plane,” said Crosby. “So flight attendants have to be able to put themselves in the customer’s shoes and have empathy for them when they come on board.”

It seems like a given, but Crosby suggests anyone seeking to be a flight attendant should make sure they know they like being in an airplane.

Crosby, who worked in an airport but had never flown in an airplane before being accepted as a flight attendant trainee, said it took her six months to get used to being in the air.

“If you’re thinking of being a flight attendant, you should take at least one flight,” said Crosby. “You may get on a plane and find out you have high anxiety and this is not for you.”

Interested in being a flight attendant? Most every airline has a “Careers” section on their website. Here’s the link to the ‘careers’ section on United’s site.